Excursion 47, Part 2 (Ask What You Can Do For Your Countryside)

I grew up in El Paso, Texas, and went to college at Trinity University in San Antonio.  There’s 550 miles of Texas between the two cities.  Over the years of driving back and forth, you come to learn things—traveller’s things, at least—about the places in-between:  Van Horn, Fort Stockton, Junction, Kerrville, etc.  You’d know where you can get gas, which towns or villages had a place to eat—which town had the Pizza Hut, which had the McDonald’s, and which had the “Dairy King.”   That was all driving on I-10, I should note, the same drive, every time, which gave me a very limited view of half a thousand miles of Texas.  Though I drove near it many times, I never once saw the village of Iraan, Texas (“the second largest town in the second largest county in the second largest state”).  Of course, when you have half a thousand miles to cover, minutes become precious.

That’s one of the things I like about being in Ohio and taking my little excursions.  I can explore and see all the things you can’t see from the freeway. I feel “invested” in Ohio, because of this, more than I ever felt invested in Texas.

This is the second half of a collection of photos from an excursion I took into southwestern and southern Ohio in July 2015.  When I ended the previous blog post about this excursion, I was exploring the village of Leesburg, Ohio, and I will explore some more in this posting, eventually ending up out in the countryside.

Leesburg, a small village (population 1,314, salute!) in southwestern Ohio, has its own police department.  Not all such communities do; many contract with the local sheriff’s department to provide their law enforcement services.  How big is the Leesburg Police Department?  It has a chief and four officers on its website, but may have two other officers as well. In July 2015, when I traveled through this village, the village experienced 4 accident reports, 20 incidents (ranging from “found property” to “unruly juvenile” to “illegal use of minor-oriented material,” whatever that means), 5 arrests, 10 traffic citations, and 60 warning citations (so not a speed trap!).  All in all, a pretty quiet place to live.

After exploring Leesburg, I headed east, out into the countryside once again.  Some miles away I came across this old barn, nicely bracketed by a pair of stately trees.  If you look closely, you might be able to see the buzzard perched attentively on top of the silo.

About halfway between Leesburg and Greenfield, Ohio, but to the south a bit, alongside the somewhat alarmingly-named Rattlesnake Creek, is a tiny collection of houses that seems to be called Centerfield, a place so insignificant that even Wikipedia does not have a listing for it, not even as an unincorporated community (nor does its name show up on Google Earth).  It is as if this tiny community is slowly disappearing from the earth.  However, Centerfield’s history may date all the way back to 1801, when it might have begun as a settlement called “Crawford’s Thicket.”  Many of its early residents were Quakers, though eventually a Methodist and a Universalist Church were also built in Centerfield.

I mention that because of the above photograph, of a building that clearly at some point was used a church but has since been converted—roughly—into a dwelling.  I have tried to find out what church this originally was, but with so little information available on Centerfield, it is very hard.

Right next door to that house is a very functioning church, the Centerfield Friends Church, which is the only way I found out that this place had a name.  The very existence of this church illustrates the continuous presence of Quakers in this part of Highland County for over 200 years.

Continuing my journey to the southeast, I eventually came across Paint Creek State Park, which contains within it Paint Creek Lake.  Like many Ohio lakes, Paint Creek Lake is a reservoir (a flood control reservoir, as a matter of fact), and of relatively recent vintage, having been engineered only in the late 60s and early 70s. The water was a bit high when I took this photograph. 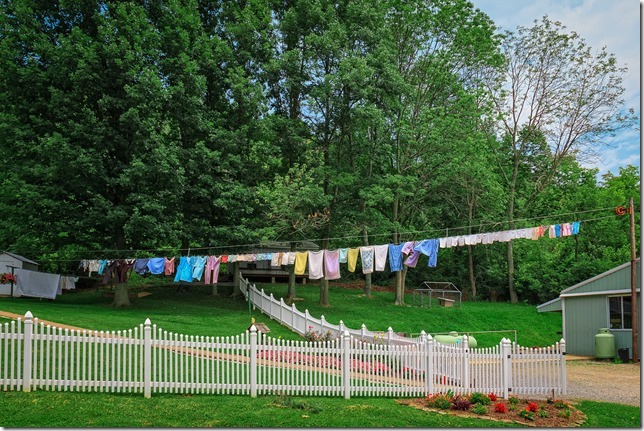 I headed south towards the hamlet and unincorporated community of Cynthiana, Ohio, and on the way there I came across this very impressive clothesline.  You have to really like open-air drying of clothes to construct a clothesline like this.  Every now and then I come across a specimen such as this one, and am always duly impressed.

Here is one of Cynthiana’s few businesses—or, rather, I should say, here is what used to be one of Cynthiana’s few businesses.  It was in operation at least as recently as 2008 (where it shows up on Google Maps road view, still in operation, though without the signs (Beer Gas Pizza, etc.) pictured here. Perhaps there was just not enough passing traffic to keep it afloat. 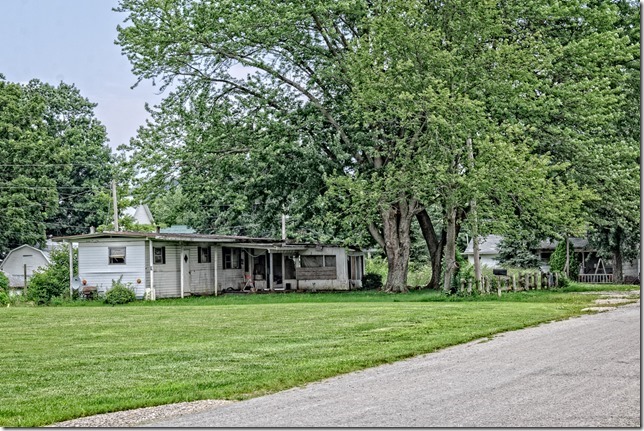 This mobile home is one of the residences of Cynthiana; you can see how the owners constructed an outser shell over it, which probably does help protect it from the elements. 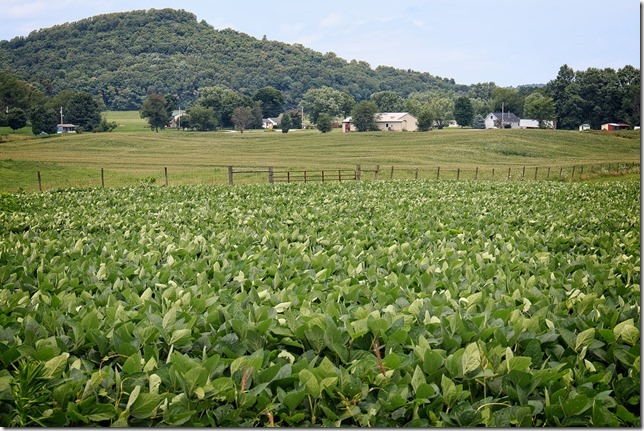 By the time you reach Cynthiana’s vicinity, you are definitely inside Appalachian Ohio, something that can be seen as the topography itself changes, getting more hilly and wooded.  In “outer” Appalachian Ohio there is still a fair amount of farming, but there are always hills in the background.  As one gets deeper into the foothills of Appalachian Ohio, the level areas for farming become fewer and the hills become more dominant.

This idyllic farmland setting is just outside of Cynthiana. I like this photograph because it has such an unusually clearly defined foreground, middleground and background.

In case you didn’t notice in the previous photograph, perched on top of the barn are a trio of buzzards, resting while keeping an eye out for their next meal. 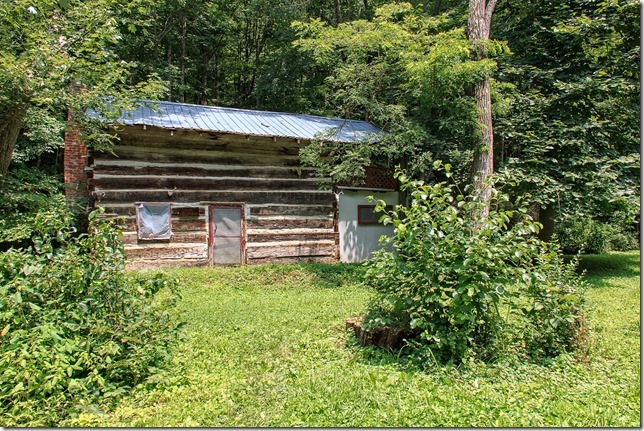 Some distance away, in the middle of some thick hilly woods, near a stream, I came across this old cabin of uncertain vintage.  One of the interesting things about driving around back-country Ohio is that every now and then you’ll turn a corner and there will be some old log cabin, nestled away somewhere, hidden from the world.

I continued my drive to the east, passing through Piketon.  I did not tarry there, having taken some photographs of it on my previous excursion, but I will note that just a couple of weeks prior to my writing this entry, a series of horrific murders occurred in the vicinity of Piketon, where eight members of a family were killed at several different murder scenes in what was clearly a well-planned and brutal act of violence.  The investigation into these deaths is still ongoing—it seems that members of the family were involved in various illegal activities, which may have some relation to the violence—but it is certainly an act of violence on the scale that rural areas like Pike County virtually never encounter; I am sure it shocked everybody there.

So instead, I will end this excursion with another countryside shot of a barn, taken a few football field lengths to the east of the village of Beaver, which I had also recently photographed.  It is nice and peaceful and that’s a better way to end this excursion than with a meditation on murder.

4 thoughts on “Excursion 47, Part 2 (Ask What You Can Do For Your Countryside)”