Ask two people about farming in America and you are likely to get two different answers.  Or, somehow, even three.  America’s farm economy is booming, but the family farm is in steep decline.  Except when it is not.  So here are some quick facts, or generalizations.  First, the amount of American farmland has been relatively stable for many decades—it has had a steady but slow decline of acreage, largely due to development, which has been more than compensated for by increased production. There are around 2.2 million farms in the U.S., but there are more bus drivers than farmers—and farmers are aging, though there are signs that a new generation of farmers is emerging. Analysts often talk of “corporate” farmers and indeed a relatively small number of farmers account for the majority of farm production, but most farmers themselves are still family farmers, with many of the so-called “corporate” farms still being run by families that have incorporated for business purposes. The size of the average farm is about 440 acres or so, triple that of a century ago—and this is a good thing, as it illustrates (among other things) the disappearance of tiny sharecropped farms. In any case, 440 acres is still a pretty modest average.

In mid-July 2015, I had an opportunity to take a drive through southwest Ohio’s farm country at the height of the growing season and it was a pleasant journey indeed.

My excursion took me southwest towards Cincinnati, travelling along back roads in the corridor between I-75 and I-71, before I finally decided to start heading east, ending up some miles south of Chillicothe, more or less due south of Columbus, before heading back. 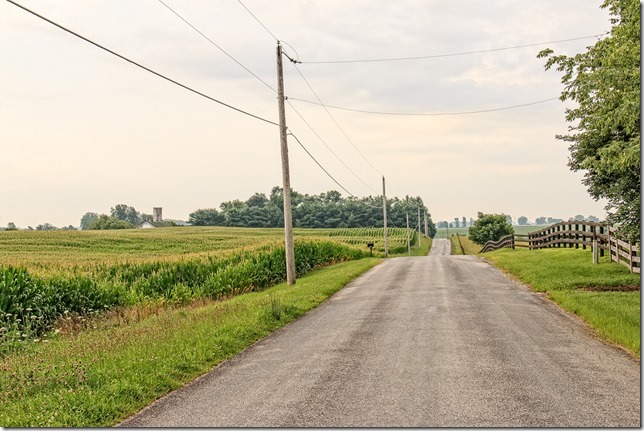 Western Ohio is prime farm country.  Here we are looking down a country road in Clark County, which is where the town of Springfield is. Clark County has about 780 or so farms, with the average size being about 220 acres. These are generally small, family farms.  Driving in farm country is such a contrast between winter and summer. In July, when this photo was taken, everything is lush and green, though the corn and foliage may obscure your view.  In the winter you can see farther but what you see are brown or yellow fields, depending on if there are any crop remnants in them. 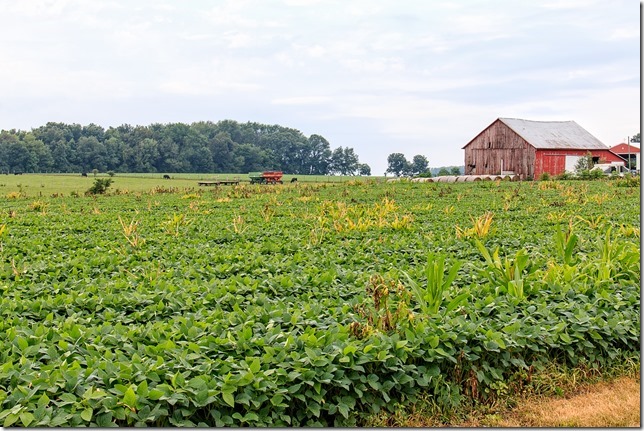 This field of soybeans, about five or so miles southeast of Springfield, has some “volunteer” corn growing in it from a previous planting.  I am basically an outsider when it comes to farming; I’m a city boy.  However, I have had relatives who were farmers—the Rio Grande Valley, in New Mexico and Texas, is a fertile farming area in a region otherwise mostly desert—and, because we kept our family horse on the farm, for many years I was out there every week (to clean up the corral).  My great uncle grew mostly cotton, with the occasional alfalfa crop thrown in. I think he may have grown chili peppers on occasion, too, but I could be misremembering. Southern New Mexico is chili pepper country.

Here’s a grand old farmhouse, southeast of Springfield, poking its head above the already-high corn. I saw very little corn growing up, other than what we planted in our family garden, and was surprised to discover how fast it grew.

Here is a shot of the front of the same farmhouse, showing off its extensive mowed lawn. If you only ever learn one thing from Unearthed Ohio, it should be that Ohioans love to mow their lawns more than they love life itself. 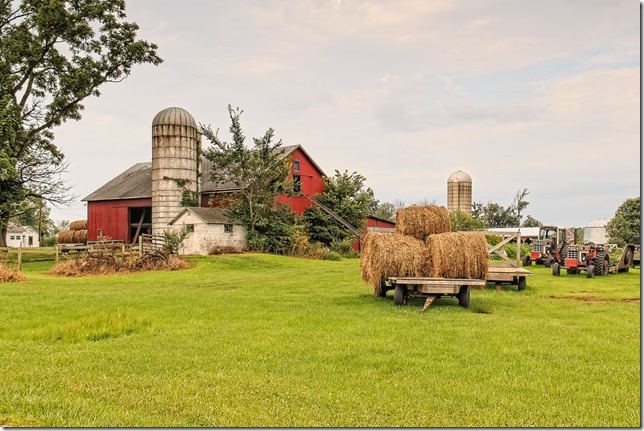 Where you have farms, you have barns, of course, and this scene seems almost a staged bucolic setting, with haywagons, a barn, and a silo. And a mowed lawn, by god. 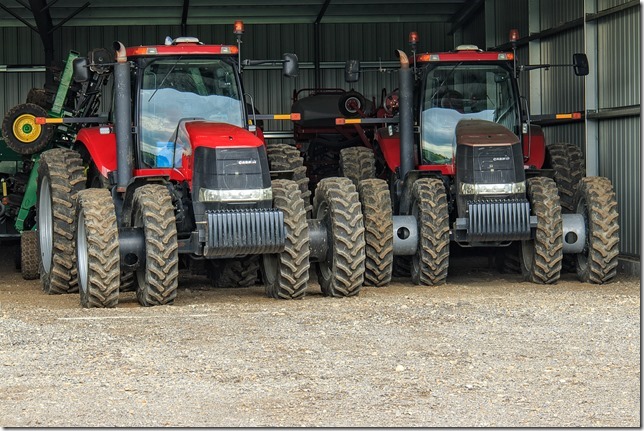 One thing that fascinates me about agriculture in Ohio is the agricultural machinery—in particular, the vast range of age and sophistication of the vehicles and equipment used.  I have seen countless tractors 50 years old if they were a day—and still in use—while at the same time I see modern agrarian monsters such as the above tractors.  Modern expensive tractors can include Internet access, built-in refrigerators, smartphone mounts, advanced computer mapping programs, and much else.  These tractors, which I think are Case IH Magnum 180s, also offer heated seats and radios with Bluetooth, 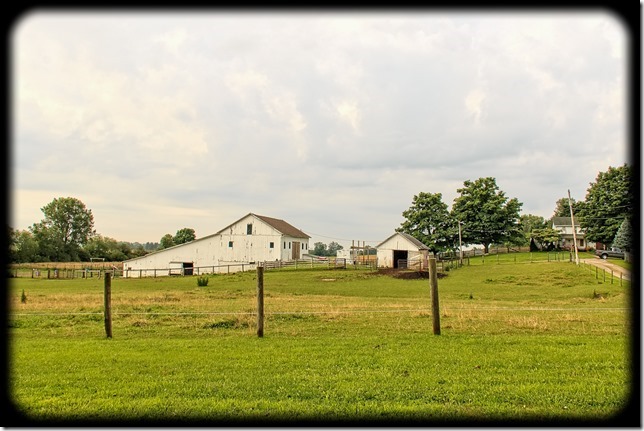 This farmhouse and its outbuildings are located due south of Springfield and due east of the Springfield-Beckley Municipal Airport. It was a nice farm, but there was no hint of any of the livestock which it clearly usually has.

About a mile south I came across this impressive, if somewhat ramshackle, barn.  Until I moved to Ohio, I pretty much thought all barns looked alike. When I started driving through the countryside, I was amazed at the virtually infinite barn designs I encountered.  One thing I still don’t quite know is why barns seem to be more fragile than farmhouses.  Is their construction not designed to be as permanent?  Or is it simply that their large size makes them more susceptible to wear and tear from the environment?  Perhaps it is an illusion and they really are just as permanent, but my gut tells me otherwise. 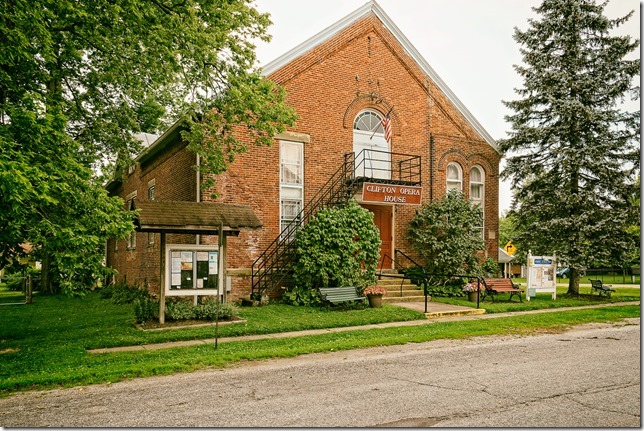 South of Springfield is the tiny hamlet of Clifton, Ohio, population 152 (salute!).  It reached its peak population of 310 way back in 1880, so it’s been a long, slow slide since then.  Amazingly, from this nearly non-existent place, two famous people emerged.  One was infamous Ohio State football coach Woody Hayes.  The other is both more obscure and more famous at the same time:  Isaac Kaufmann Funk. You may have heard of him in connection with Funk and Wagnalls, the publishers of dictionaries and encyclopedias. Pictured here is the rather unexpected Clifton Opera House, built in 1893.  Clifton may well be the smallest place to have an Opera House, though I do not know if it has ever actually hosted operas.  Over the course of the past 100+ years, it has hosted everything from live music shows to minstrel shows (!).  This past year it has hosted both banjo players and accordion players, so keep that in mind.  If it hosts bagpipe players, run. 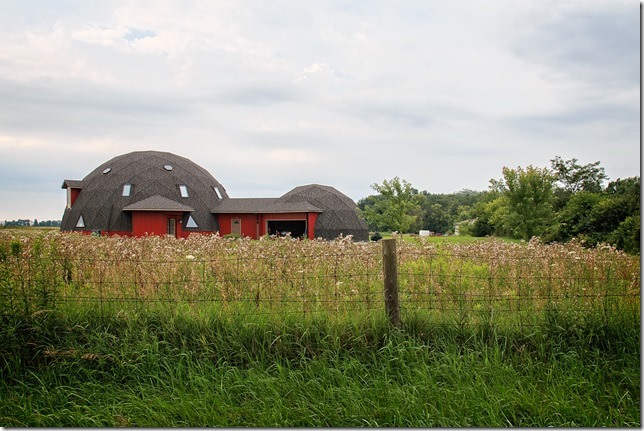 Just outside of Clifton, I was tickled to come across this geodesic home. Every once in a while I come across a geodesic building; they never fail to surprise me. Geodesic dome homes had a slight fad stage in the late 1960s and early 1970s, which is when many of the domes you may see were built, but they never really caught on, because they actually have a host of practical disadvantages. However, there are still contractors out there who can build one for you if you want to get your dome on.

As I headed southwest, I circled around the town of Xenia, Ohio, and in so doing drove by the Greene County Regional Airport.  Flying above the airport, I discovered, was a World War I biplane, a Sopwith Camel (Snoopy flew one).  It is not every day you just happen to see World War I era aircraft in the air. The aircraft has a name painted on the side: Judy L.  There is an unexplained 10-second YouTube video clip titled “A Sopwith Camel lives in Greene County, Ohio,” that may well be this plane (how many Sopwith Camels could there be in the county, after all), but the video shows the plane from the other side, so one cannot be sure.  The registration number on the plane in the video belongs to a Sopwith owner out of Texas who seems to go to different air shows.

The sky was quite gray and featureless in this photo, so I actually converted the photo to black and white, to bring out the clouds more clearly, then brought the color back in for the plane itself. Technically, it is not a very good photo, because I had no time to change lenses or mess with my camera settings (which are all set for landscapes, not action shots).  That is a problem that I frequently run into; virtually all my experience has been with non-moving targets, so it takes me some time to think of the changes I need to make (lenses, focus mode, shutter speed, etc.) and by the time I remember and set them all it is too late.

I took this photograph at pretty much the same spot as I did the biplane, only looking around rather than up. Corn and silos, very agrarian. 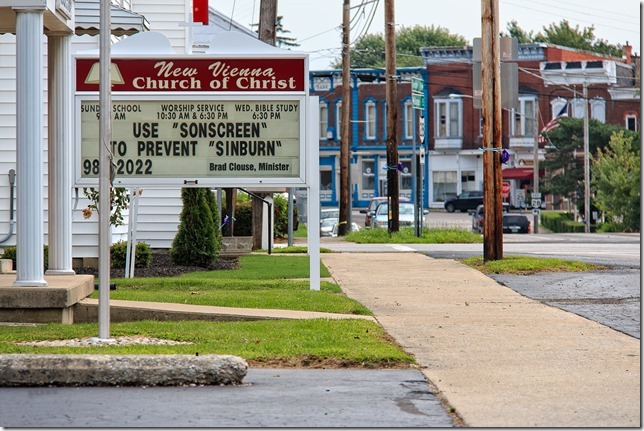 Lest anybody think I have gone over to the Children of the Corn, I’ll throw in a few small town photographs to wind up the first half of this two-part excursion.  After the airplane, I traveled for some time while taking few photographs, heading south, then southeast, until I found myself in New Vienna, Ohio, a small village with a population of some 1,225 (salute!).  In the 1990s, New Vienna was also headquarters for the Ohio branch of Aryan Nations, a fact I picked up in my day job.  The original name of New Vienna was actually Buzzard’s Glory and I confess I like that name better.  However, re the above photograph, the Buzzard’s Glory Church of Christ doesn’t sound so hot, I confess.  I will leave it to the reader to judge the wit and/or wisdom of the above sign. But it is hard coming up with things every week, just keep that in mind.

Here’s a shot of the main street, actually called Main Street in one of those singularly unimaginative American traditions. It is interesting that the bank building (painted blue) actually still holds a bank after more than a hundred years. Some of the businesses are unoccupied, which is almost inevitable in even prosperous small towns and villages in Ohio. And you can see how empty and placid things are on this Saturday. The generic, wordless restaurant sign on the left is rather odd. 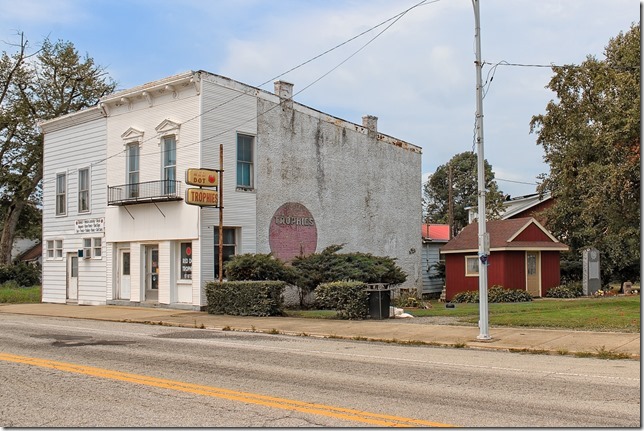 Another local business:  The oddly named Red Dot Trophies. A name like that has to have a story behind it, but I was unable to determine what it is.  I will hazard a guess, with no optimism that it is correct, that the name may have some sort of connection to the red dot that was the divisional insignia of the 37th Infantry Division, a division composed substantially of Ohio National Guard troops that fought in the Pacific in World War II. 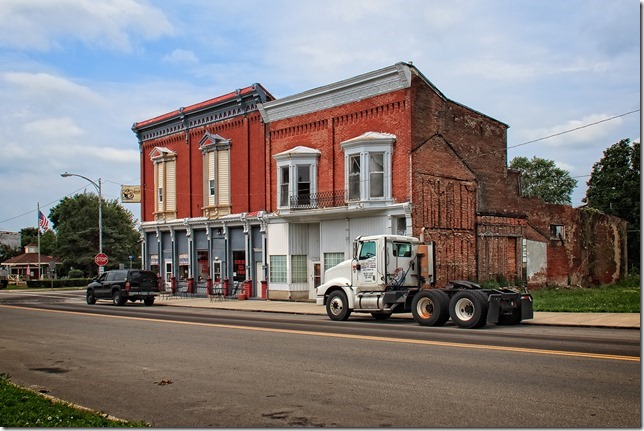 This photograph looks back at Main Street from a position opposite from where I took my original main street photo—notice the wordless restaurant sign.  The bank building would be to my left. The scars on the building in the center of the photograph show rather clearly what existed at one point adjacent to it.

Perhaps three miles east of New Vienna is Leesburg, Ohio, a sort of sister city with a population of 1,314 (salute!). It is also rather more prosperous, with a per capita income some $3,000 higher than New Vienna’s.  Leesburg, with its motto of “the Friendly Village,” is a tiny farming village that has apparently seldom been disturbed in its placid history.  It’s purpose has generally been to serve the farming communities that surround it, and it has had various mills, canning operations, and other agricultural businesses located within its boundaries. It has also had Les’ Garage, an old-fashioned filling station. The Facebook page linked to above includes a torn old photo of this garage when it was in operation.

And lastly, to wind up the first half of this journey, a shot of a well-worn work truck from the Judson Lumber Company—parked, oddly enough, in front of a building with the exact same shade of red.  Perhaps this is one of the little-known Chameleon Trucks.