When I was in high school, I was a member of the Math Club.  Yes, you heard me correctly, I did not lose my virginity in high school. One year we traveled to Monahans, Texas, about 250 miles away, for an academic competition. It was probably more than just a math competition, because we went in a school bus.  On the way back, after a long day, I stared out from the bus into the darkness of the west Texas desert, listening to Simon & Garfunkel’s Concert in Central Park on my Walkman knockoff. When the song “Homeward Bound” started playing, I was suddenly swept up, listening to the lyrics, by a feeling of incredible melancholy. To this day, when I hear that song, especially when I am traveling, I still feel those strong emotions—there is something in that song about a desire to be rooted, to be anchored, to belong somewhere, that to me is very powerful.  It may speak to me so strongly because it sometimes seem to describe my entire life rather than merely an episode in it.

At the end of July 2015, I decided to take another excursion across Ohio.  My past several trips had all explored parts of southern Ohio, so for this trip I decided to head east.  This excursion thus took the form of a fairly direct west-to-east voyage that threaded the needle between I-70 on the south and US36/US250 on the north, all the way to West Virginia. I took I-70 east to Zanesville, then headed north a bit to get out of previously explored territory before turning east.  This led me to the small village of Dresden, Ohio (population 1,529, salute!), a small but old settlement in Ohio along the Muskingum River, one of Ohio’s most significant waterways and tributaries to the Ohio River.

The Muskingum River is large enough that crossing it is no easy matter and even today the number of bridges that cross it is limited, creating irritating bottlenecks for an explorer like me.  In 1852, a resident of Dresden constructed the third suspension bridge ever constructed in the U.S. to cross the Muskingum (never recouping his expenses, I think).  That is not, however, the bridge pictured above; the original Dresden bridge was completely destroyed in a major flood in 1913. This is the bridge that was constructed in 1914 on the same site to replace the destroyed bridge; it is thus itself over a century old by now.  As you can see from my photograph, it is no longer in service—and, indeed, is so narrow that its use would be problematic.  It was already long since closed in 1992, but I was unable to find out when exactly its closure occurred.  A modern bridge is next to it.

I did not cross any bridge, which would have been to head west.  I turned east to travel into eastern Ohio Appalachia. 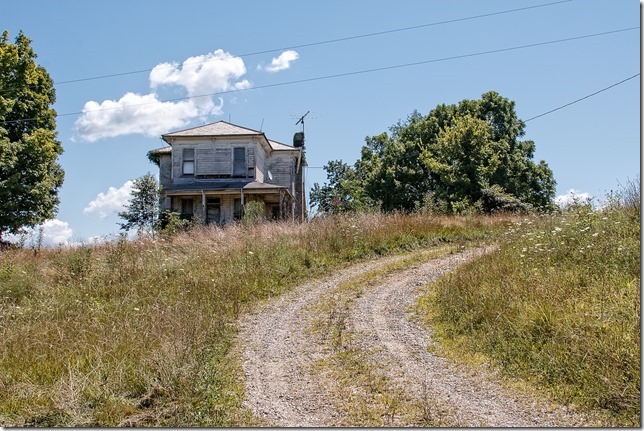 One doesn’t have to go very far at all from flat Columbus before the terrain starts to change.  Here, 70 miles or so east of Columbus and maybe three miles east of Dresden, you can see that hills begin to predominate.  This lonely house on top of a hill looks as if it were abandoned ages ago, but the satellite dish shows that its latest residents didn’t move out all long ago.

The area of Ohio I was now driving in is very hilly and wooded, but every now and then there will be a fairly flat plot of land and you can find the occasional farm in such a location.  That was the case here.  The barn itself is not particularly remarkable, but what I liked about this place was that I could see right through the barn to the dense woods on the other side, giving it a tunnel-like effect. It also shows how right up against hills and woods these small farms are.

So are the houses, when they aren’t built on the hills themselves, as we see here.  This house was virtually invisible, shrouded by woods, but what is quite visible and striking is the long wooden staircase leading down from the house to the road—and to the vital lifeline of the mailbox.  I think if I lived in such a house I would probably be the typical American and just drive to the mailbox rather than trek up and down those stairs each day—especially in the winter. 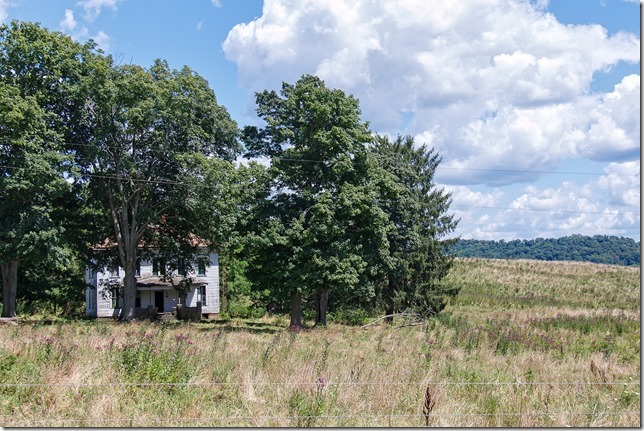 My travels had taken me to Coshocton County, where I was studiously trying to avoid winding up in the town of Coshocton, because all roads lead to Coshocton.  One of the other inhabited areas of the county is the tiny hamlet of Plainfield (population 157, salute!), its own name as unassuming as one can get.  Just a football field or two outside of Plainfield, I found this stately but abandoned residence, shown against the wood-covered hilly backdrop of the region.  Whoever built this house originally planted a number of trees that now, over the many decades, have grown to rather stately heights, creating a leafy cocoon for the house.

Here is another angle of the same place.  Plainfield is in a relatively flat region, which means that it is surrounded by farms—and this was certainly a farmhouse at one point.  However, it has rather gone to seed and regular readers of this blog may be a bit surprised to see that no one is bothering to keep this place mowed, something that Ohioans seem to love to do even to their abandoned properties.  This homestead looks a little lonely and forlorn, despite the bright, sunny day. 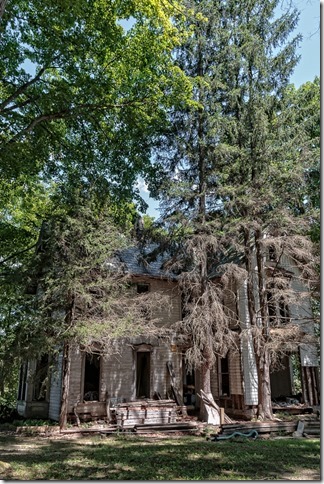 A nearby neighbor seems to be suffering an even more inglorious fate.  This old farmstead—once more surrounded by stately trees—seemed to be in the process of being dismantled and taken apart when I drove past it.  I presume someone is salvaging the lumber of the old house.

Abandoned houses are everywhere in rural Ohio and this particular blog is filled with images of them. This image is one of my favorites from this excursion, a particularly vibrant shot of a derelict but sturdy brick farmhouse perhaps a mile west of I-77, a few miles above Kimbolton.  It seems to me that one minor thing lends a lot of depth to this photograph and that is the thin shadows of the telephone wires that reach out to the viewer.  It creates a strong third dimension to the photograph.

Further south along the same road, the oddly-named 8th Street Road, I came across this pale lime-green building of no particular discernible purpose.  It did not seem to be a barn or a residence or a business.  It just was.  But there is nothing particularly remarkable or noteworthy about this building; rather I use this image as the establishing shot for an odd detail that I noticed.

To wit:  in the upstairs window in the back of the building, my keen vision detected a tiny Santa staring out of the window at me.  What sort of place is this that would even have a tiny Santa in a back window?  Your Tiny Santa Curiosity Meter may be less sensitive than my own, but I still want to know the answer to this, dammit.

If 8th Street Road is an odd name for a road, just on the east side of I-77 is another oddly-named thoroughfare, Old Twenty One Road.  And Old Twenty One Road leads to Freedom Road, which winds its way over hills and through woods until it reached Pebble Road. And Pebble Road eventually runs into Mica Road.  Near the juncture of Pebble and Mica stands this stalwart brick house, a relic of a time long since past, judging by the architecture—including the round-topped windows.  However, unlike many of the other houses seen here, this one is not abandoned but still very much lived in.

Far younger and far less stalwart or stately is this abandoned place, a residence formed by joining two mobile homes together.  At least, I am presuming this is the case from the makeshift driveway and the satellite dish.  It doesn’t seem that this is  where someone simply dragged two unused mobile homes to rot.

This photograph of a barn standing sentinel on a hill was taken somewhere near the tiny hamlet of Freeport, Ohio (population 369, salute!), but I can’t say exactly where, because my GPS was acting up and giving false readings.

Further east, not too far from St. Clairsville, I chanced across something I’ve seen several times now in eastern Ohio—an oil or natural gas well being dug/built.

Here’s a close-up of the rig.  I have no idea what purpose those small shelter-looking things in front are supposed to serve.  Many of my photographs of eastern Ohio over the past three years have shown the transformation of the countryside thanks to the fracking boom—the creation of new roads, the building of pipelines all over the place, and of course the rigs and wells themselves.  As of now, the boom is not booming so much, thanks to the increased oil output from Saudi Arabia, but that is probably not sustainable over the long run and things will pick up again soon, for better or worse. 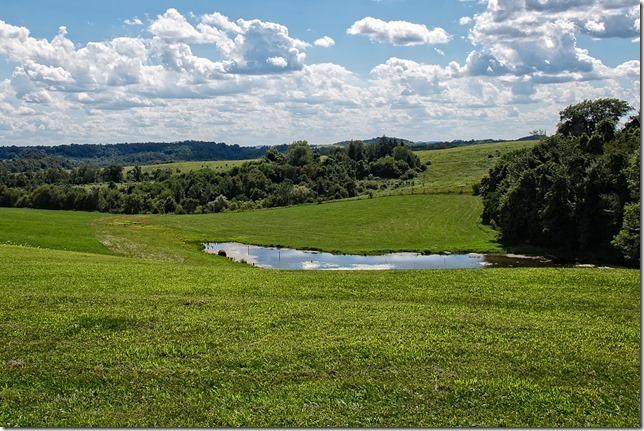 Not all of the countryside is full of oil and natural gas wells, of course.  Here is a rather idyllic shot of an eastern Ohio countryside on a beautiful sunny day.

After a very pastoral set of photographs, I’ll wind things up with a short or two of some of the towns in far eastern Ohio.  This shot of Carpenter’s Pizzeria was taken in Flushing, Ohio (population 879, salute!).  This small village is in Belmont County, which borders the Ohio River and West Virginia.  It has lost about a third of its population over the last 30-40 years, which is par for the course for towns and villages in this region, sad to say.  Of Carpenter’s, a Yelp reviewer informs us that it is the “Best pizza around. The sauce is simple and delicious and the crust is perfectly chewy. A must have in this quaint little village.”  Well, there you go.

I had gone almost as far as I could go and I thought it was time to turn around and head back.  I-70 offered me the fasted drive home but I was not ready to get back on a highway, so I decided to take US-40 back to Columbus instead.  This old road, once one of our nation’s major thoroughfares, in the early days of automobiles, is something I have written about many times, primarily for all of the old “motor hotels” or motels, or ruins thereof, that dot its entire length across the state.  One such hotel, with a name aptly suited for the end of this excursion, is the Sunset Motel in Belmont County.  It is small, with only a few rooms, but it seems to date back to 1922, making it close to a hundred years old.  Unfortunately, I was not able to find out more information about this establishment.  I suspect it was originally called something other than Sunset Motel.  But it is a fitting sunset on which to end this excursion.