When I was a kid, there was a popular t-shirt that depicted a mouse in the grasp of an eagle’s talon.   Even as the eagle was lifting him off the ground to be lunch, the mouse gave the eagle the finger.  I tried to find such a shirt on the web, or the original artwork, but failed.  However, you can find a cruder, less dynamic version if you do a Google image search on “the last great act of defiance.”  Why do I mention this 1970s t-shirt?

I mention the t-shirt because in my excursions around Ohio I am constantly reminded of this t-shirt, typically by a tree or structure that is still somehow hanging on, despite all the odds, though perhaps the worse for wear.  We’ll see an example of this below.  When you come across something like that you just have to respect it and the “Fuck you, I’m still here” message it defiantly delivers.

Here is something that has not stood up to anything; this is a not particularly impressive modern version of a covered bridge.  Ohioans are oddly fascinated by their covered bridges,  Covered bridges were a form of wooden bridge built in the United States more or less during the period 1790 to the mid 1800s.  They are “covered” not to protect travelers but the wooden planks of the bridge itself, to prolong its life.  I have found such widely varying numbers for the total number of such old bridges that have survived in Ohio that I can’t actually provide a number, but the range is probably somewhere between 120 and 170.  For some reason, Ohio has a significant proportion of all the surviving covered bridges in the United States.   For some reason, the vast majority of Ohio’s surviving covered bridges are  in southern Ohio.  Because of the fascination with covered bridges, it is not uncommon now for developers to build new covered bridges with modern materials in imitation of the originals.  They hold none of the fascination that the originals do. 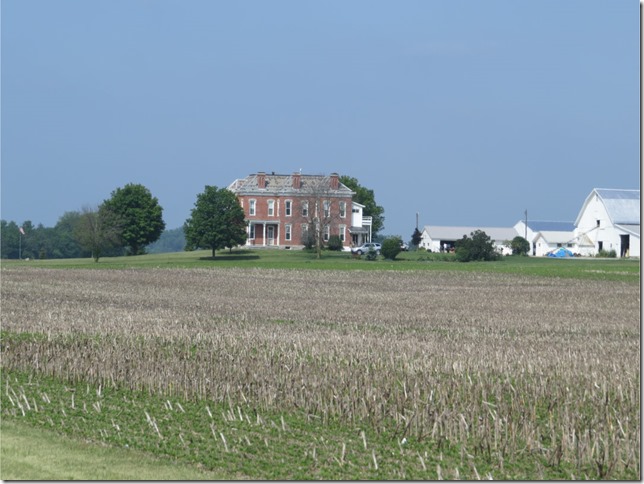 As I was driving through west central Ohio, in Union County, I spotted in the distance a massive house that was clearly at least a century old.  It is visible from some distance in this flat region of Ohio because it is built on a slight swell of ground.  I zoomed in for the above photograph.

At maximum (digital) zoom, with a bit of heat shimmer, you can make some of the “Italianate” features of its architecture. 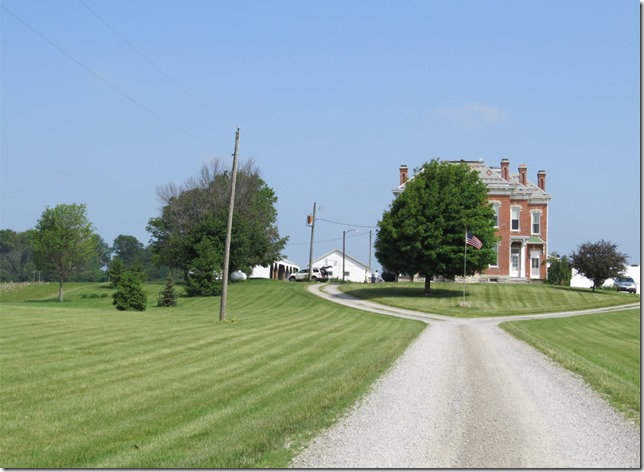 I was eventually able to navigate my way closer to the building, where I discovered that it has been dubbed “The Fort” and is on the national register of historical places.  The house was built in 1877.  It never had a military purpose; it was simply a mansion built by a rich horse breeder.

Summer in rural Ohio.  Note the cemetery in the distance.

Here’s the cemetery looking at it up close from the other side.  It seems quite cheerful (for a cemetery) in this early morning air. 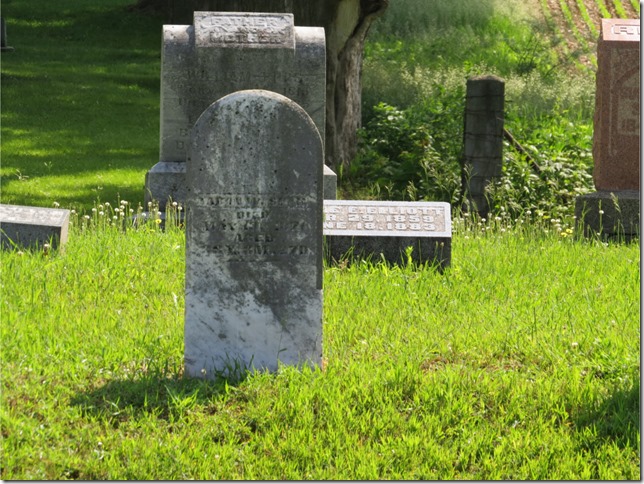 The anonymous dead.  Eventually, we all join this category.

Does anybody still remember my t-shirt reference?  Here is what triggered it.  This tree, somehow still alive despite all odds, immediately reminded me of the mouse on that shirt.  Who knows how much longer this tree will live, but it is still alive right now, dammit.

Here’s a barn beginning its own long dance with death, starting with its massive porch.

This establishment, Dianne’s Pizza, struck me because it was a pizza place out in the middle of nowhere in rural Ohio.  Okay, almost the middle of nowhere; it is located in a tiny unincorporated mix of houses dubbed Millerstown, Ohio, too small even to be called a hamlet.

Not long after passing by Dianne’s, I came across a very odd site:  in the distance, I could see the skeleton of a barn poking out of the fields of young corn.  Although the roof looked intact (though in fact it is not), it was strangely missing most of its sides, making it look as if it were elevated on poles.  The barn was quite distant, but the zoom capabilities of the SX50 allowed me to capture it reasonably well. 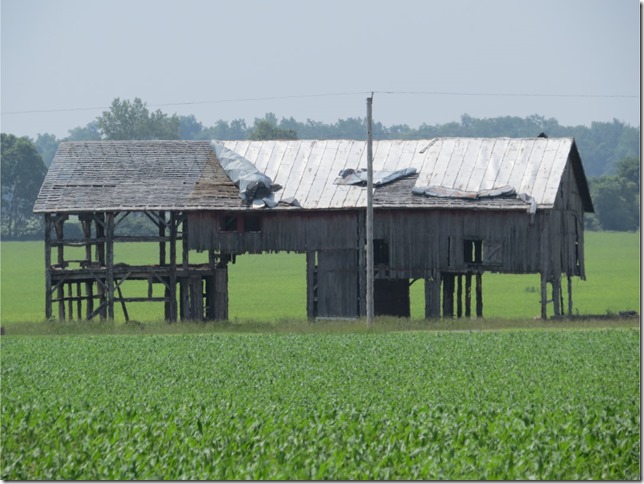 Here’s an even closer look, just so you can see more detail.  Is it being dismantled?  Re-built?  Hard to say.

As a coda, I present this very oddly weathered mobile home resting quietly behind a row of houses in rural Ohio not far from Troy.