In which our intrepid hero discovers a three-tiered transport…

One of the fringe benefits of a hobby like this is that it adds an extra flair to many mundane activities.  For example, a friend of mine who lives in Troy, Ohio, invited me over on June 8 to play a strategy game.  Troy is a town north of Dayton that is perhaps 75 minutes away from Columbus via the Interstate.  But if I left several hours early, I could use back roads to get some picture taking before I got there, which is what I did.  Now I wasn’t simply trying to get from Point A to Point B, I was also having an experience.

I decided to head northwest out of Columbus, then turn west at some point to get me pointed Troywards.  I was excited about this mini-excursion because I was testing out a new camera for the first time:  my Canon PowerShot SX50 HS.  This camera is neither a point and shoot nor a DSLR or mirrorless camera but rather a sort of intermediate stage of camera often called a “bridge” or “superzoom” camera.  Essentially, it is similar to a point and click camera except that it has powerful inherent optical zoom capabilities (50x in this case, which is many times greater than the typical 3x to 5x found in most point and clicks).  When you are taking pictures from the road, having a good zoom is pretty important, I discovered, but taking pictures quickly is also important, which means you may not have the opportunity to change lenses.  Thus a superzoom seems useful for this sort of “quick and dirty” photography.

Just outside of Columbus, on the way to Marysville, I found this large abandoned house next to a used car lot.  Vines and foliage are besieging the building, reaching all the way up to the roof on every side. 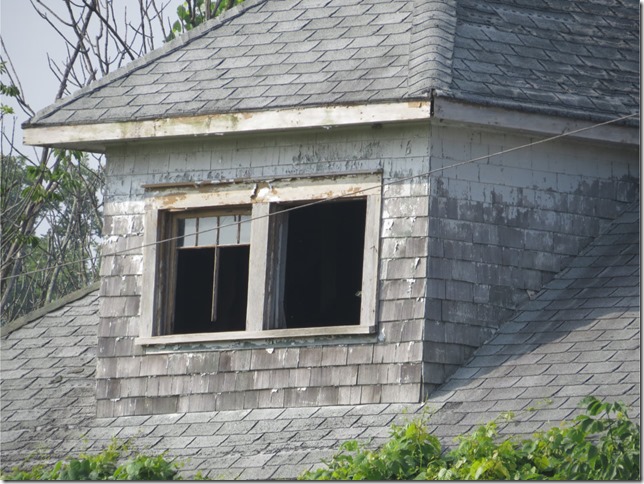 The attic windows are open and/or broken, providing a tantalizing glimpse inside.  You can see that the camera zooms nicely.   Not long after this excursion I would get a better window mount and a wired remote control to help with sharper images. 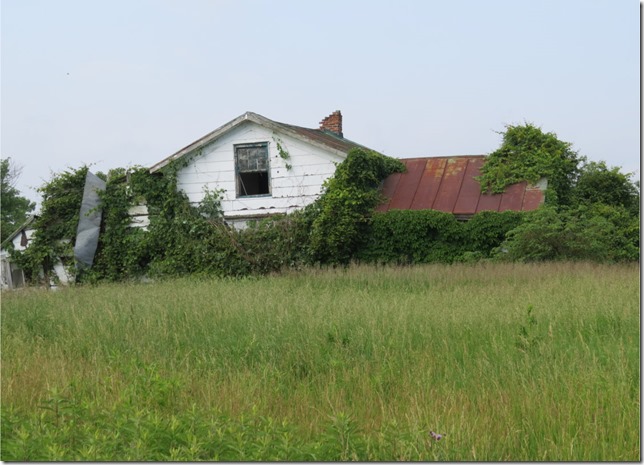 Not too far down the road was another abandoned farmhouse, this one surrounded by a sea of high grass which hides the lower level of the house.  Once again, foliage has climbed all the way to the roof, leaving only an upstairs window visible.

I don’t know why the upper windows were left open in these abandoned houses.  Perhaps temporary occupants after their abandonment opened the windows for some air circulation.

Houses like these give you a bit of a feel of abandoned ancient Mayan or southeast Asian cities, reclaimed by jungle, although here the foliage is purely seasonal.

Foliage has not recaptured this abandoned barn, but it lists dangerously in front of a misty field.

I always get a frisson of excitement whenever I come across an “old-timey” vehicle.  It triggers all sorts of brain activity from when I was a child and absolutely fascinated by old-fashioned cars.  Some thrills never leave you, I guess.  I would gladly pay to have a restored old-fashioned vehicle myself, but I have not purchased one because I have no mechanical skills and would basically have to constantly find others to keep it in good running condition. 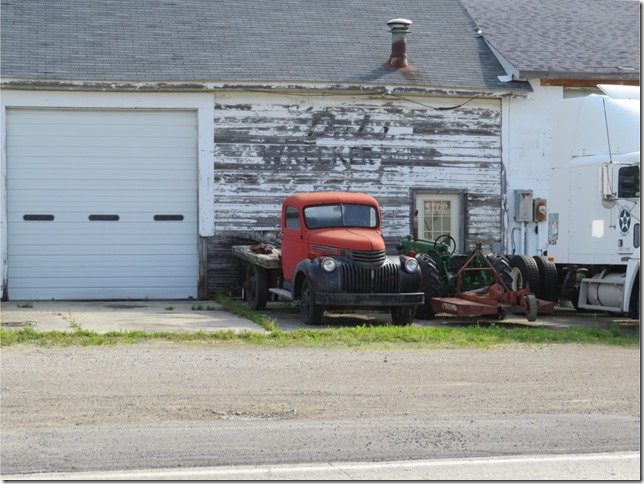 “Old-fashioned” is of course a relative thing.  My father’s first pick-up truck, which was probably a late 1960s model Ford pick-up, looks absolutely ancient today.  Heck, today an original “love bug” looks out of place, yet they were so common when I grew up in the 1970s that we could play a car game in which people would count Volkswagen Beetles they saw as they drove. 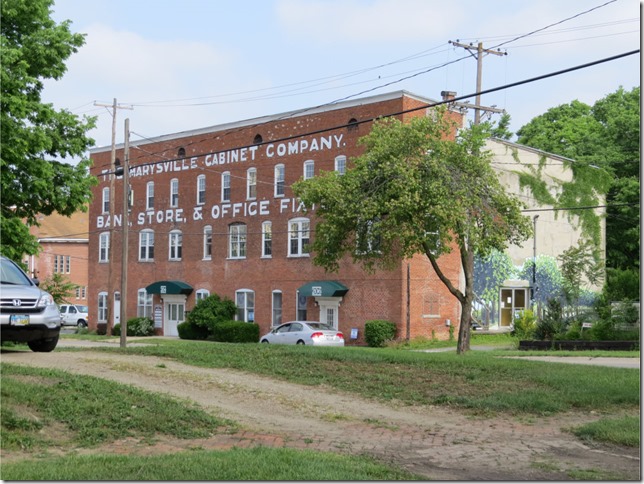 Marysville, Ohio, northwest of Columbus, is an attractive town (population 22,094, salute!) that has grown tremendously in recent decades (from less than 5,000 in 1960), thanks to its location as a distant suburb of Columbus and the presence of large businesses, such as Scotts Miracle-Gro (which has its headquarters there) and Honda (which has two manufacturing plants there, one for motorcycles and one for automobiles), among other companies.  As a result, it has a per capita income higher than many comparable towns in Ohio (most of which have lost rather than gained population).

Above, we see a old but nicely-maintained building built in 1911, which once was home to the Marysville Cabinet Company.  Notice the interesting mural on the side as well.  Now an office building, the original smokestack is long gone.

Downtown Marysville.  If it weren’t for the vehicles, you might even imagine this was 80 years ago.

There should be a word for a gap that opens up when a building in the middle of a row of buildings is torn down.  The side walls of the surrounding buildings always look so odd.  They are the architectural equivalent of the way your arm looks when you remove a cast from it after eight weeks. 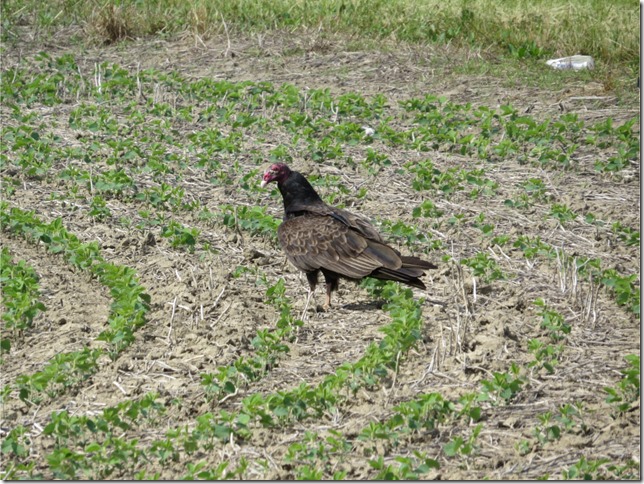 This photo and the below photo were attempts to test out the zoom capabilities of my new camera, with a turkey vulture as my sultry supermodel. 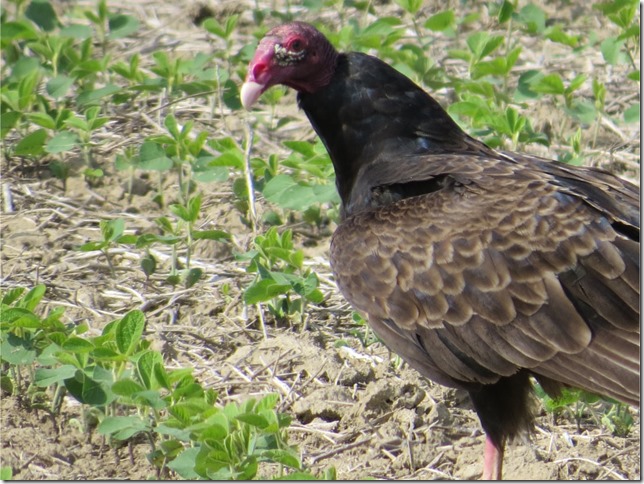 He’s ugly, but he has a nice personality.

Lastly, I present one of my two favorite photographs from this excursion, a shot looking inside a triple-tiered livestock car.  I did not even know such things existed before I shot this picture.  I guess this is used for transporting sheep or pigs; it seems too small for cattle.  I could not have asked for a nicer picture.  Every once in a while I get lucky.

One thought on “Excursion 10, Part 1 (My Baby Thinks Three’s A Train)”