For the past 18 years I have had to travel quite a bit for work, typically training law enforcement officers, prosecutors or judges in some part of the country (or, rarely, abroad).  These travels have taken me to 46 of the 50 states and, were it not for incidents such as breaking an ankle, I would have visited 49 of the 50 states by now.  Because of those facts, many people think that I get to see far more than I get to see.  “Wow,” is a typical comment, “You’ve really seen every corner of the country.”  But this is work travel, not vacation travel.  It turns out that the Jackson, Mississippi, airport looks a lot like many other airports and the Hilton hotel conference center in Yellow Snow, North Dakota, is amazingly similar to the Marriott hotel conference center in Asscrack, Alabama.  I’ve been to Arizona many times, for example.  Have I ever seen the Grand Canyon?  Not on your life.  Moreover, when I travel for work I am not even of the mindset that wants to go do a touristy thing.  My overwhelming desire is to get in, do what I need to do, and get back home.

Occasionally, though, I can combine work with sightseeing, particularly if I can drive rather than fly.  This summer I was asked to speak before a meeting of the Ohio Recorder’s Association, which was being held at a sort of modest resort in the Hueston Woods State Park in southwestern Ohio.  I arranged to speak in the afternoon, which would give me time to leisurely drive down there and take pictures, and to do the same on the way back, thanks to those long June days.

That was how I ended up passing through Eaton, Ohio, a town about only 10 or so miles from the Indiana border in southwestern Ohio.  Eaton (population 8,407, salute!) has the distinction of having the most boring town motto in Ohio:  “A Rural Community Growing In To the Future.”  I don’t even know how you “grow in to” something.  Although it is boring, it is a rather attractive town.

Nevertheless, though attractive, it did have its share of dilapidated buildings, which are grist for my photographic mill, as any of the tens of readers of this blog will know.  This disheveled house caught my eye, not least because it is stuccoed, which is not all that common in Ohio. 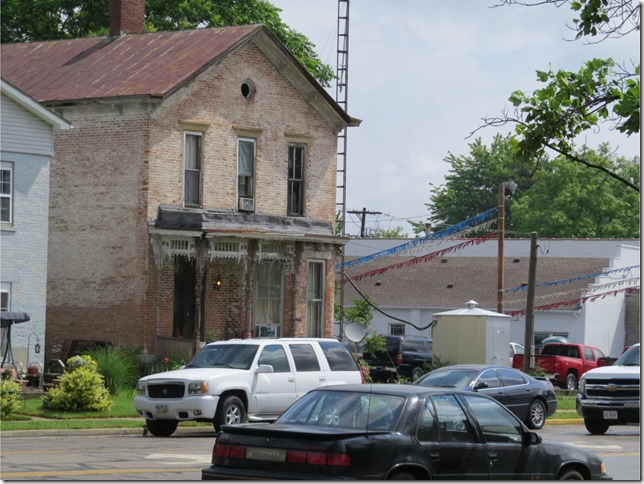 More dilapidated and less appealing is this old house.  Until I moved to Ohio, I had hardly ever seen a “tin” roof (they are not really tin, but typically terne or galvanized steel), but they are quite common in rural and small-town Ohio.  Today, most people don’t find them very attractive and I have to agree, at least once they get rusty. 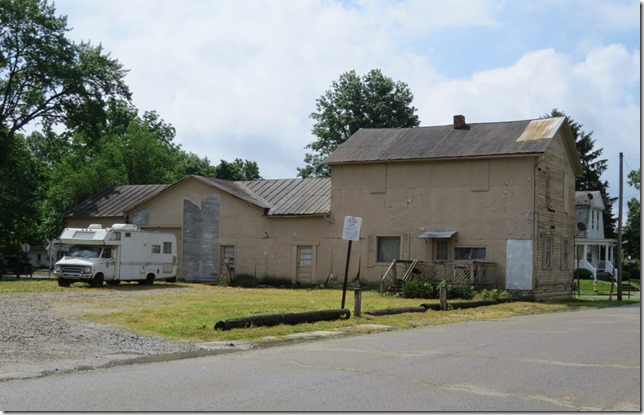 Here’s another metal roof, this time on what looks like a ramshackle business establishment of some indeterminate source. 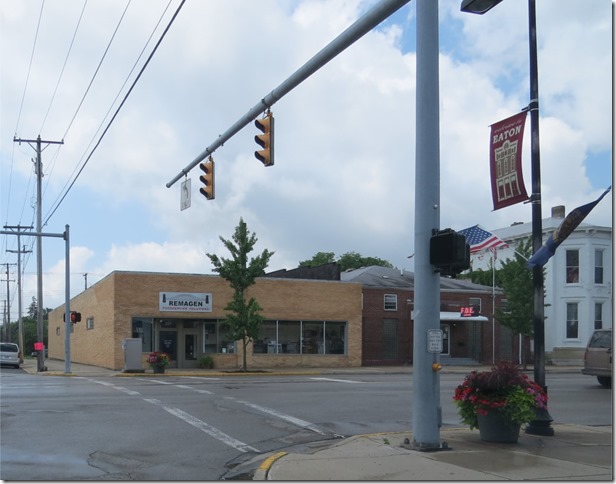 Driving through downtown Eaton, I happened to spy a most unusual sign, though most people probably wouldn’t even give it a second look.  This business establishment is Remagen Foodservice Solutions.  Remagen is not a person’s name, though—it is a place name.  Remagen, Germany, is a town along the Rhine River.  In 1945, it had the Ludendorff Bridge, a railroad bridge that was the last standing bridge across the Rhine.  The Germans had destroyed all the others to keep the Western Allies from crossing into Germany.  American troops approaching Remagen saw that the bridge had not been destroyed and, in a daring coup de main, captured the bridge intact (dramatized in the movie “The Bridge at Remagen”).

When I saw this business, I immediately knew the name had to come from the bridge—a conviction reinforced by the fact that a bridge is part of the business’s logo (and, when I got back home, I confirmed that it was in fact a rendition of the Ludendorff Bridge).  Some research revealed that the Remagen Foodservice Solutions was started by Richard H. Tuggle.  In 1945, Tuggle was a captain in the U.S. Army and commander of a company of M18 tank destroyers from the 656th Tank Destroyer Battalion (attached to the 9th Armored Division) who was involved in the capture of the bridge at Remagen.  One can understand how he was justly proud of his role in that famous battle.  He also named his farm Remagen Farm.  Sadly, he died relatively young in 1976. 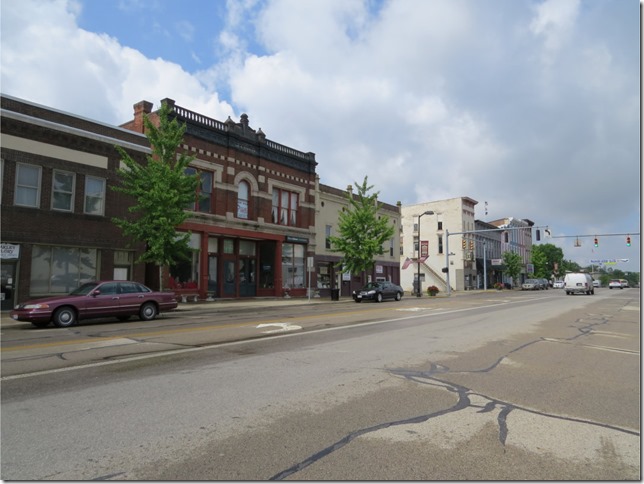 Here’s a shot of downtown Eaton.  Some Ohio towns have very desolate downtowns, but Eaton’s is attractive. 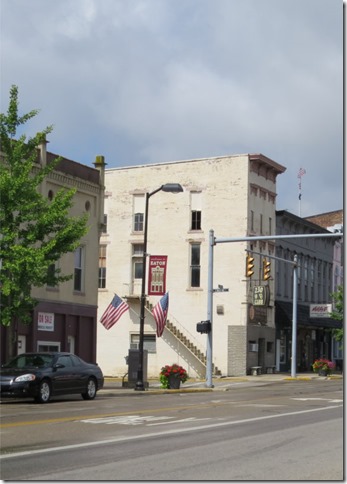 I like this particular building for two reasons.  First, something about old tall-and-narrow business buildings fascinates me (I also love narrow triangular buildings for similar reasons).  Additionally, during my excursions I have become fascinated with old external metal stairs and fire escapes. 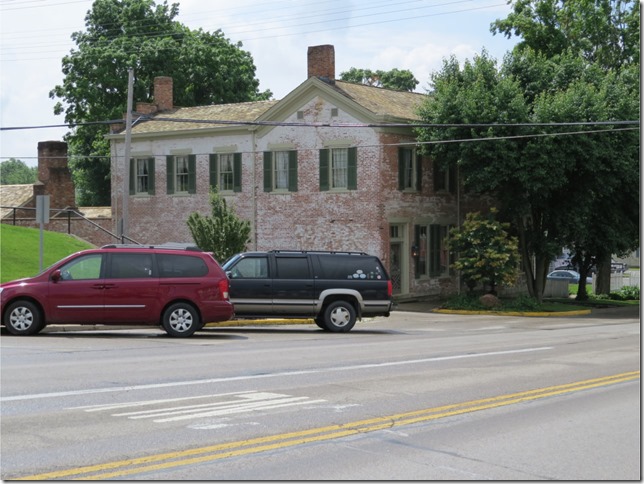 You have to be careful sometimes when looking at houses, because houses that look old are not always truly old.  Some houses are built from “distressed” (i.e., recycled) brick and they may also deliberately be built in an older building style.  However, this house has the genuine look of age to it and is quite attractive. 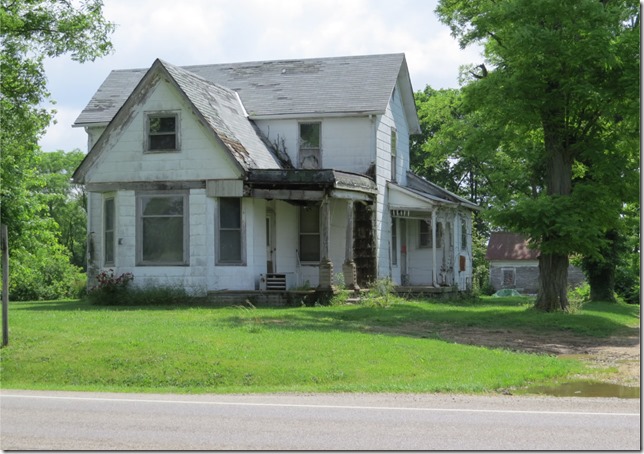 Not all old houses are as attractive as the previous one.  This house is well on the way to ruin.  I am not sure if this house is actually in Eaton or if I saw it on the road south out of Eaton.  After I left Eaton, I continued south and wound up in Camden, Ohio.  Camden (population 2,046, salute!) is a village southwestern Ohio not far from the Indiana border in Preble County.  It is somewhat poorer than Eaton and its population has decreased in recent years. 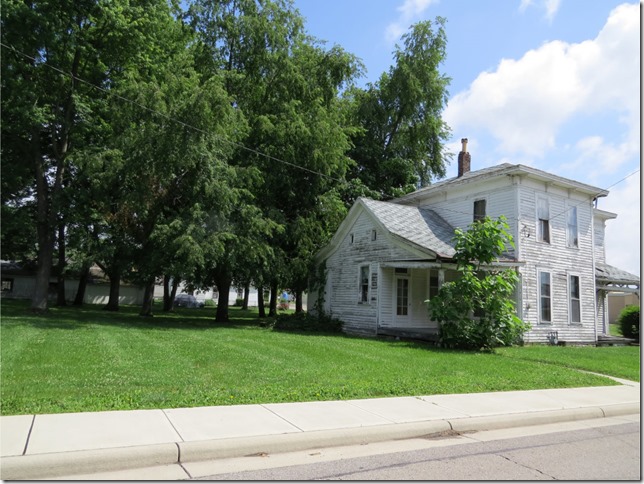 Houses like the above house puzzle me.  Someone is obviously taking the pains to keep this yard well-groomed, yet the house itself is badly in need of a coat of paint. 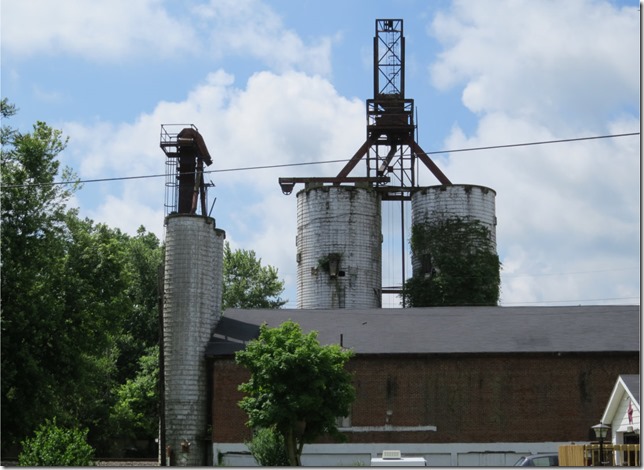 During the summer, vines often seem to cover everything in Ohio.  Most of the time, it is simply attractive and poses no threat to anything.  It could be different if kudzu takes hold in Ohio.  This invasive species has already taken over much of the South and is hardy enough to survive in northern climes as well.  It has been spotted across Ohio but has not yet become a problem.  Ohio ecologists monitor this threat closely, because kudzu grows so fast and can drive out all sorts of native species of plant and tree. 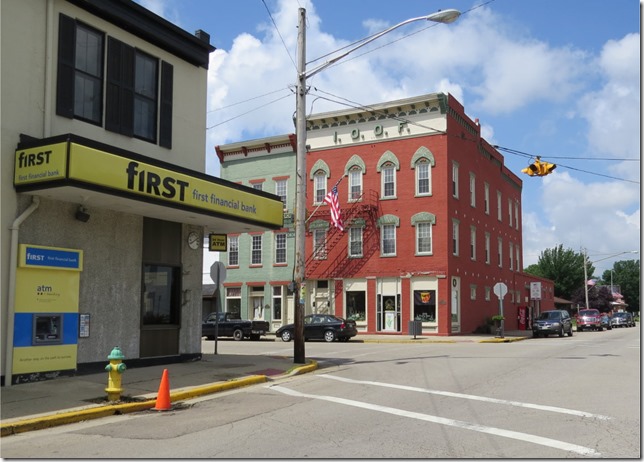 Here is a shot of downtown Camden, including a nice old building complete with fire escape.  It has been kept up very well.  The lettering near the roof reveals that this was once a lodge of the Independent Order of Odd Fellows, a fraternal organization with roots dating back to Great Britain in the 1700s.  The name does not refer to quirky people, but rather was originally used to describe various tradesmen in small towns who banded together in the absence of enough tradesmen to form craft-specific guilds (kind of like, in today’s parlance, a union for people of any employment rather than a trade-specific union).  Fraternal organizations have declined in membership in the United States over the decades and Ohio seems to have only a few active lodges.  However, many buildings in the downtowns of towns across Ohio were originally built to house the lodges of various fraternal organizations like the Odd Fellows and still stand as a reminder of this part of Ohio’s culture. 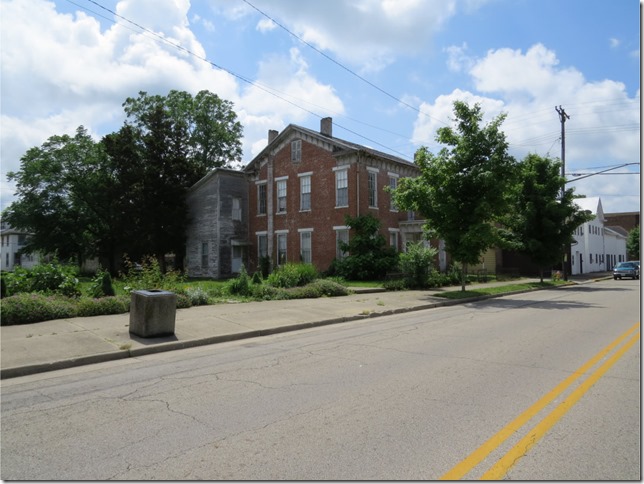 Today, this residential building is quite dilapidated, but it must have been quite impressive at one time. 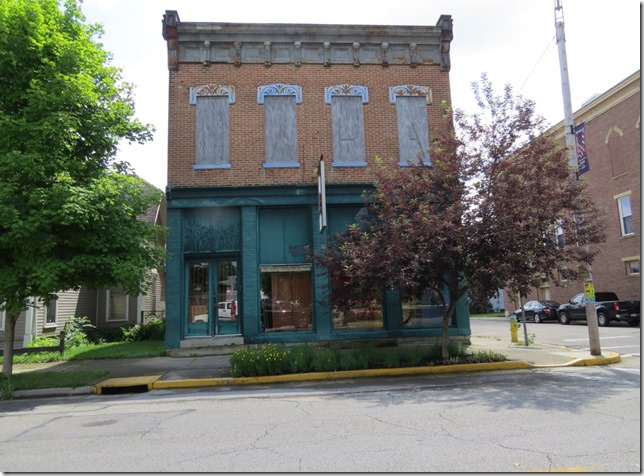 The way we do business seems so different now than it used to be that much of our old architecture is, in a sense, obsolete.  This building is perhaps a good example.  Whatever original use the second floor of this building had, it is no longer being used this way.  Looking into the ground floor, one can speculate that this particular building may not currently be used for any business at all, in fact. 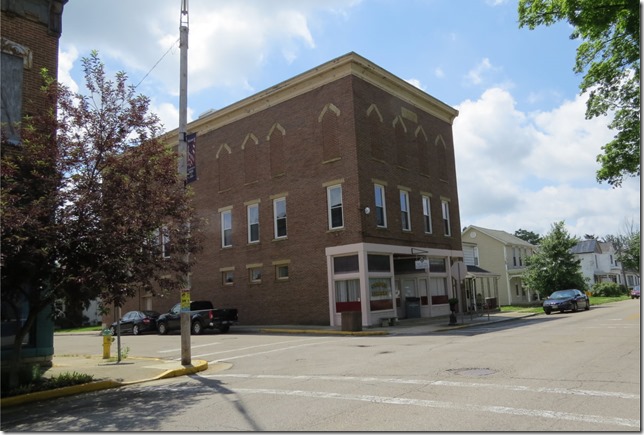