I discovered many years ago that driving on Interstates and other freeways and major roads is not very fun.  It will get you there the fastest, sure, but you spend your time watching other cars because you want to pass them or because you are being passed.  All too often, at least in the eastern United States, the “scenery” is nothing but rows of trees at the edge of the highway (often deliberately planted to obscure the view).

As a result, I learned to take the less traveled roads, when time allowed, and this introduced me to a lot of America I had never seen before.  I liked it.  I liked turning the corner and finding some tiny town that most people had never even heard of.  I liked cresting a hill and looking down at a great view.  I liked passing old, decrepit farmhouses and wondering what they were like when they were young.  Eventually, I sometimes found myself driving around in the countryside not in order to get somewhere but simply to see what there was to see.

For the past quarter century, I have lived in central Ohio.  Unlike the state where I grew up, Texas, Ohio is much smaller and more accessible.  From Columbus, I can get to pretty much any point in Ohio within three hours or so.  Because of this, I developed a sort of game that I’d play with myself occasionally on the weekend.    I’d pick a direction or a part of Ohio that I wanted to go to (often southeast Ohio, because I have always found it the most interesting part of the state).  Once I got a little ways out of my home base, I would take random roads that seemed to go in the direction in which I wanted to go.   If I saw another road that seemed to be going in a good direction, or simply looked interesting, I’d take it.  Basically, I’d get lost somewhere in Ohio.  After doing this for several hours, I’d use a road map to find out where I was, then drive back.  I had no purpose, no goal, I just wanted to drive around and see what I could see.

Typically, I would do this by myself.  It’s a very relaxing experience, because you have nowhere to be, nothing specific you need to do; you can do whatever you want.  I might listen to the radio while driving, or simply be alone in my thoughts.  But I also discovered it is a fun thing to do with another person, as long as they are in the same head space as you

(and if they are a good conversationalist).  So I’d sometimes take someone with me.  On one of these platonic “dates,” we stopped to inspect a small prison we had unexpectedly come across, and got chased away by corrections officers! 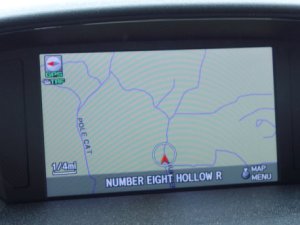 You know you are in the middle of nowhere when you are in a “holler” and over the hill from Pole Cat Road.

I enjoyed these excursions, with or without a partner.  But we live in a busy world, and I didn’t always have time to devote to them.  Plus, they seemed so ephemeral–it would not be long before I’d forget much of what I had seen.  In the mid 1990s or so, I bought a digital camera and thought that I could use it to take interesting pictures of some of the things I saw (I know myself too well to have been drawn to cameras with film, because I am too lazy to want to worry about getting film developed, plus I would likely just lose the pictures).  However, digital cameras were relatively crude then and the pictures were low resolution and not satisfying.  The notion went nowhere.

And that is basically where matters stood for well over a decade.  But this past year I revisited the notion, because technology had seemed to come to my rescue.  First, digital cameras were unbelievably better than they originally were.  This spring I felt the urge to buy a new camera and did.  I purchased the highly regarded Sony RX100, about as good as you can get for a point and click camera.  Of course, now I had to justify the purchase by taking pictures!  Last spring, I bought a new vehicle, a Honda Pilot, the first vehicle I’ve owned with a navigation system.  This was wonderful, because now I could go on very very “back” roads without getting lost.  And finally, the Internet provided me with the means to do something with photographs other than just have them gather virtual dust–I could share them with other people.  Technology, it seemed, had teamed up to make it really inviting for me to begin driving excursions again.

This blog is my attempt to share some of the photographs I’ve taken on some of these driving excursions in Ohio, both in rural areas and in the state’s cities and towns.  You’ll learn more about my photo interests and strategies in the blog entries to come, but I’ll just say here that I have no real skill or experience with photography (and I am far too impatient to ever be a good photographer).  I make no claims of beauty or quality for these photographs.  All I can say is that something about the subjects that I photographed interested me.  I am sure many of these pictures won’t interest you.  But maybe some will.  And you will see a tiny slice of Ohio, a state I have grown to love very much.