From the moment I decided that I would start this blog–which, lazy as I am, was some time before I even started taking pictures, much less started the blog itself–I knew what image I wanted to feature as the very first image of Ohio Unearthed.  It was something I had for years been hankering to photograph and document for posterity somehow, someway.

What I wanted to photograph was The Silent Woman Bar.

It was some 20 years ago that I first encountered it, trying to find some little computer parts store on East Main Street.  There it was, in all of its glory–if you have a rather idiosyncratic notion of what glory means.  It was a small, non-descript building, nothing to remark on, really.  But there was THAT SIGN.  The sign for the Silent Woman Bar featured a headless woman.  Even taking into account the neanderthal attitudes present in whatever Pleistocene era the bar was born into, that is one ballsy in-your-face sign.  You can just imagine the bitter, divorced, middle-aged bartender who thought up that bar name and sign, and the black glee he must have felt as it came into being.  The Silent Woman Bar.  It’s the sort of thing that you can’t help admire in a way, even as you deplore it.  There’s an evil genius behind that sign.

So, now that I was going to start the blog, I knew the image I was going to feature first, right here, in this post.  I wanted that sign.  I needed that sign.  Moreover, there were other things I knew I could photograph on the way to the Silent Woman Bar (keep reading my blog and you’ll see them).  Accordingly, on April 1, 2013, on a dark and overcast day, I set out across town to find the Silent Woman Bar.

Alas.  What I found was that the Silent Woman Bar no longer exists.  Its proprietor retired or had his fifth heart attack or, one almost hopes, had a fatal encounter with his third ex-wife.  Some other bar is now in its place and the sign is no more.

That’s just too darn bad.  I was certainly not the only person who had been struck by that sign.  One woman on flickr (who identifies herself as columbustravelgal) did have the foresight to take a picture of the sign in 2009.  She wrote:

My grandparents who used to babysit me lived about 1 block away from the bar. My grandma frequented the carryout (for ice cream & smokes) that was located next door to the Silent Woman. I remember being a bit disturbed by the headless woman on the sign, but then grandma fed me ice cream & all was well with the world.

35+ years later it felt kind of funny to pull into the parking lot of this bar. Some day I will actually step foot into this bar just to see what the heck it looks like inside.

I presume she never actually entered the bar just as I had never taken a picture.

A very few people did take pictures of the sign before it disappeared, and just to satisfy your curiosity, I repost one of those pictures here:

Although my trip to the Silent Woman Bar proved to be unsuccessful, I think I have a satisfying alternative as the “debut” picture for Unearthed Ohio.  And I didn’t even have to drive across town to find it.  My alternative is only a few blocks away from where I sit right now, typing.I live in a western suburb of Columbus called Hilliard.  An old rail station town born in the mid-1800s, Hilliard was eventually absorbed into the Columbus metropolitan area as the larger city grew like a weed in the second half of the 20th century.  Today, Hilliard has a population of around 30,000.  Most of it is “new” Hilliard–i.e., typical suburban neighborhoods erected in the past 25 years or so.  But some of it is still “old” Hilliard and not your standard suburban fare.

My own neighborhood, for example, is mostly a housing development built around 1996.  But a few of the streets are much older and have houses that date back in some cases as far as the late 1930s and early 1940s.  Some of these houses are tiny Cape Cod style houses built in the late 1930s–such houses were common during the Depression.   Here’s one such house, about two blocks from my own: 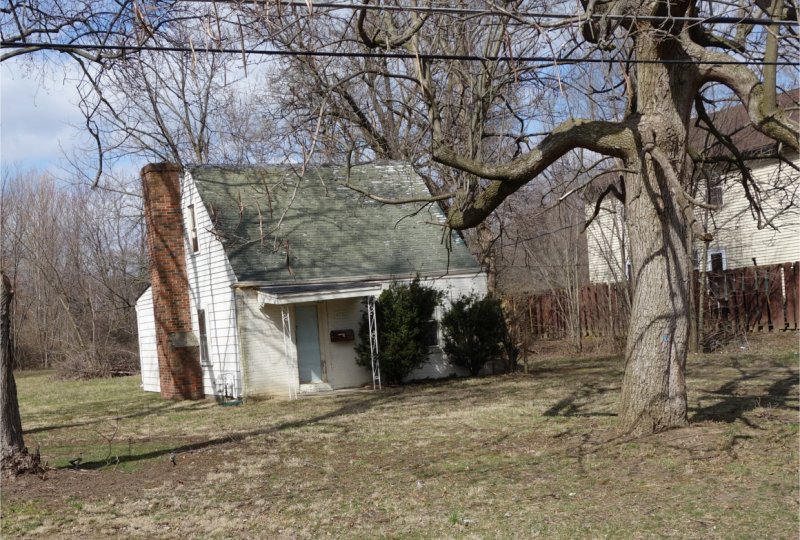 The Tiny House of Mystery

As you can see from the full-size version of the photo (click to see), this tiny tiny house is showing its age.  An ancient man resides in it–or resided in it; I am not sure if he still resides there full-time, though I see him once in a while in the yard.  And this ancient man who lived in this tiny tiny house had the most wonderful things:  he had SPACE CARS.

I first saw one of them not long after I bought my house in 2004.  I was driving down the street and saw one of the cars and did a double-take.  His space cars seem to have been built some time from the late 1960s to the mid 1970s (I am guessing early 70s).  They look like they were futuristic cars built as props for some long-ago science fiction movie.  In other words, they are future cars from the past.

He had two of them and seemed to work on one or another of them out in his front yard quite a bit.  One was white in color while the other was a sort of chrome.

I was–and am–fascinated by these “space cars.”  Every time I drove down that street my head would unerringly swivel towards his house, so that I could see if one of his space cars was out.  Numerous times I almost stopped the car to go up and knock on the door and ask him about those cars, but I never did work up the nerve.

I even composed a little ditty about the cars:

After some time had passed, I stopped seeing one of the cars.  More than a year later, the other one no longer appeared on his property, either.  I can only assume that he sold them or junked them (I certainly hope the former).  It was really quite a sad day when it finally dawned on me that I would never see those space cars again.

But–unlike my experience with the Silent Woman Bar–I actually did take pictures of his space cars before they disappeared.  So I share them here with you, to “christen” this blog as Unearthed Ohio.  Or perhaps that should be Unearthly Ohio?

One thought on “Excursion 1, Part 1 (Silent Women and Space Cars)”