Excursion 58 (Cloudy with a Chance of Memory)

When I was a child, in the 1970s, Charlie the Tuna was ubiquitous on television. Charlie was the cartoon tuna who helped sell Star-Kist Tuna (with the tag line “Star-Kist doesn’t want tunas with good taste. They want tunas that taste good.”). The commercials always featured Charlie trying but failing to be caught by Star-Kist, apparently because he wasn’t high enough quality. As a kid, I found the commercials a bit confusing, as the difference between “good taste” and “taste good” was lost on me.

But there was something even more confusing.

The other confusing aspect of the Charlie the Tuna commercials (here is a sampling) is that Charlie the Tuna wanted to be caught.  Here Charlie (who has been the Star-Kist symbol for more than 50 years now) is only one example of a veritable zoo of animal product mascots who seem gloriously to seek their own self-demise.  Indeed, this is so common that people have recognized it as a particular trope.  This is one of those things that, most of the time, you don’t really stop to think about, but as soon as you do, it gets real weird real fast.

As we’ll see, I had one of those moments in May 2016 in a fairly short trip into east central Ohio with my friend Tsuki, before rain eventually forced its abandonment.

My goal was to head east out of Columbus on U.S. 40 to Zanesville, then head north from there, exploring the country east of the Muskingum River.  Here a nice little farmhouse in front of seedling crops starts us on our merry way. 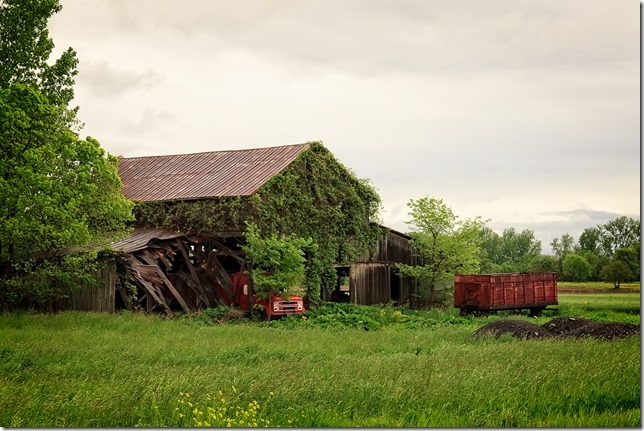 I had driven (and photographed) this stretch of U.S. 40 before, but mostly in 2013, when I was quite a novice (and poor) photographer. I am still not a good photographer but at least my photos now are not usually quite as embarrassing. I photographed this barn before, in April 2013, and you can see the difference.  Note the difference between April 2013 and May 2016. In the course of just a month, the barn can become overgrown with vegetation.

Some miles down the road there is an interesting pink house right up against the road.  I noticed this in 2013 as well, but hopefully this photo pays attention to thinks like perspective, horizontal levels, and white balance, among other things.

We finally got to Zanesville, an hour’s drive east of Columbus, and headed north, but in North Zanesville I saw something I had not seen before in any previous trips, a butcher shop called Rittberger’s North Market.  I think you can immediately see why I opened this blog entry the way I did, as the cartoon pig statue is so prominent.

Rittberger’s Market is a longstanding local business, in essence dating back a century to the original Carl Rittberger, a German immigrant. Much of the meat sold by Rittberger’s appears to be meat products they raised, and often smoked, themselves.

I think the pig mascot is worth a look here.  The pig is smiling, but if you look carefully, it seems to be a nervous, almost anxious sort of smile, as if he knows what is going to happen to him but has to lie about it:  “Hi, folks, heh heh, nothing but great tasting stuff here, heh, lots of great beef and chicken and, um, ham, um, so come on down, and, um, PLEASE I DID WHAT YOU TOLD ME TO DO, DON’T TAKE ME NOW, JUST PUT ME AT THE BACK OF THE LINE, I’M BEGGING YOU, PLEASE!”

Maybe I’m reading too much into his expression. 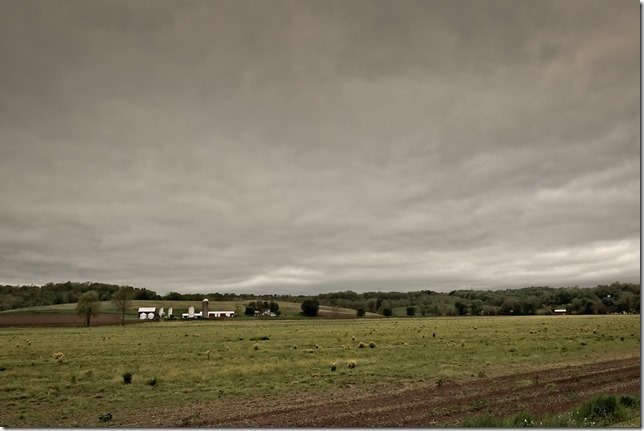 I took this photo of a farmhouse a bit south of the tiny crossroads of Shannon, Ohio.  Muskingum County is officially part of Ohio Appalachia, but it is essentially the gateway into the region and, especially east of the Muskingum River, tends to be flatter and more open than most of Ohio’s Appalachian region is. 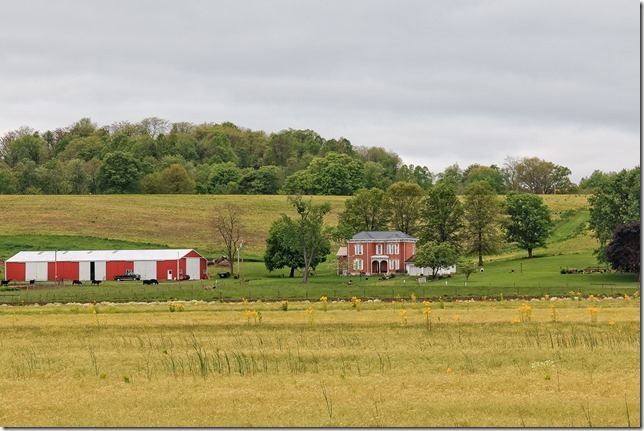 Because of its transitional nature, the region has more active farming going on than much of Ohio Appalachia does, as well as the large old farmhouses that one can often see in Ohio’s agricultural areas. 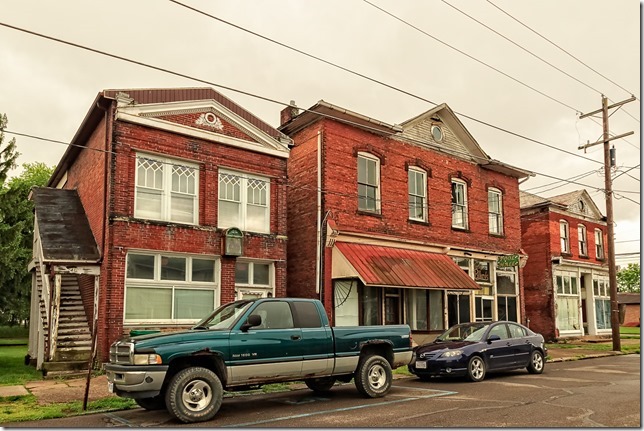 The village of Frazeysburg (population 1,326, salute!) is located in the far northeast corner of Muskingum County, between Newark and Dresden. I first heard of Frazeysburg in the summer of 1995, while still a military history graduate student at The Ohio State University, but also in the process of developing my second area of expertise, on right-wing extremism.  The village of Frazeysburg came into the news that summer, only a couple of months after the Oklahoma City bombing, because a white supremacist and anti-government extremist, Michael Hill, got involved in a lethal encounter with a Frazeysburg police officer while driving through the village one night on his way back to his home in eastern Ohio. Hill pulled a gun on the officer but it was the officer who was able to fire first, killing Hill.

I wrote about it a year later, when his widow held a memorial service on the anniversary of his death that drew in right-wing extremists of all sorts from all across Ohio.  But it would be many years before I would ever actually visit Frazeysburg myself.

Frazeysburg, for such a small place, has a number of interesting buildings, and this photograph shows three of them, all of which seem empty, including the pool hall, which once was Farrell’s Billiards. What other businesses may have been in these buildings is obscured in mystery.

The building on the left, you’ll notice, has an interesting object sticking out from its front face above the doorway, more or less. When I examined my photos closely, I discovered that it had some mostly faded writing on it.  I was able to increase the contrast until I could make out the larger words, which read “BURGLAR ALARM.”  Some Internet sleuthing led me to conclude that this was a type of burglar alarm produced by the O. B. McClintock Company from Minneapolis, Minnesota.  This company made electric clocks and electric burglar alarms.

Here’s an advertisement of their wares, from a 1928 issue of The Rotarian:

Here is the building on the end, which has an open door.  Is someone working on it?  The ground floor was clearly once some sort of business, perhaps a corner store/market.

The window letting on this store front suggests the place might have once sold books, but it doesn’t seem to sell anything any longer.

You may wonder why I took a picture of this grassy field just north of Frazeysburg.  There is, if you’ll look closely, a swing hanging from the tree in the center of the photo.  But the real reason I took this shot was because in the very distance, nestled up against the trees near the top left, is a deer stand, perfect for hunters who want to nail any deer who venture from the woods out into the open.

You can see as we drive further north that the terrain is getting more hilly. On one distant bald knoll, I saw that someone had placed an American flag.

Nearby I saw this interesting-looking house.  I hope the crosses in front mark the graves of pets, not people.

As you get into more hilly areas, you can occasionally find vineyards.  In the mid-19th century, Ohio actually was the largest domestic wine producer in the United States (with Cincinnati its commercial hub), but Prohibition wrecked the Ohio wine industry.  Ohio now has around 150 wineries and five different designated American Viticultural Areas in various parts of the state. Are today’s Ohio wines any good?  Not being a wine-drinker, I cannot myself say, and of course websites about Ohio wines tend to be full of boosterism. 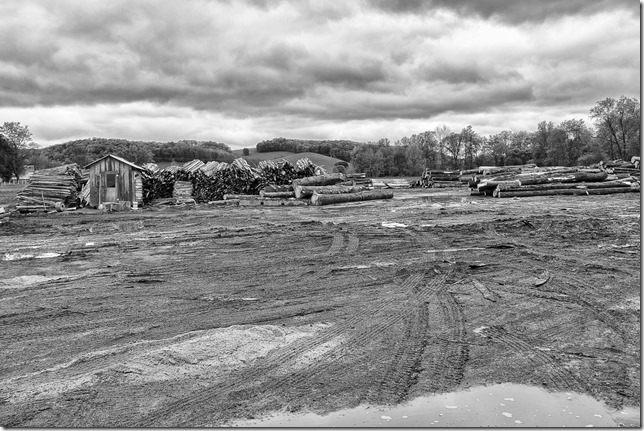 We came across this woodmill about an hour’s drive northeast of Columbus, an area I did not really associate with lumber, though in reality there is no real shortage of woods in that region. 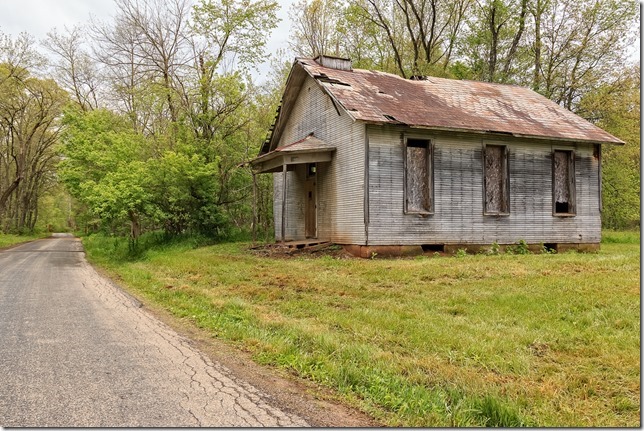 As always, you can’t drive for too long in back-country Ohio without coming across an old one-room schoolhouse.  Here we see one of the rarer wood schoolhouses—rare not because they were necessarily less common than brick schoolhouses, but simply because wood schoolhouses are less likely to survive a century or more intact.

My GPS battery apparently ran out here, or the GPS got switched off, so I cannot tell you exactly where I came across this rather forlorn-looking basketball court.  As I’ve mentioned before, Ohioans will put basketball hoops in the unlikeliest locations, including where basketballs cannot possibly be dribbled, as well as in front of long dropoffs, where any errant shot might send the ball careening down a long slope.  Here, at least, someone tried to construct an actual court, of sorts. 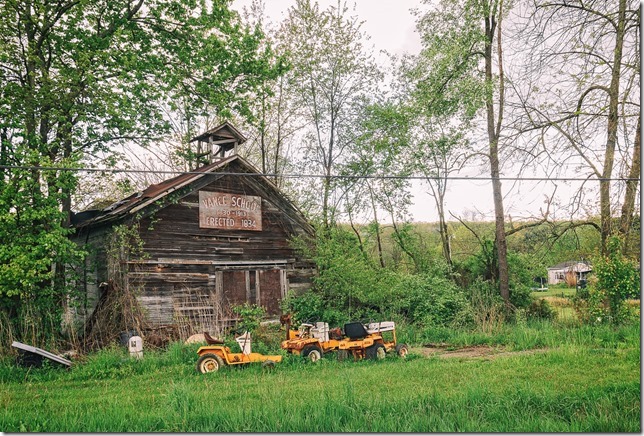 Lastly, I thought I’d share a couple of shots of the Vance School. This old schoolhouse, the sign tells us, lasted from 1830-1913, with this building allegedly being erected in 1834, which would make it remarkably old for a wooden schoolhouse in Ohio, if true.

That someone went to the effort of putting a sign up suggests that at one point, at least, this building was considered  noteworthy—but I have been unable to find information about it. By the way, I wonder if you strongly suspect–as I do–that the sign originally read “ERECTED 1934” and someone then spotted the error and had to correct the 9 to an 8.

2 thoughts on “Excursion 58 (Cloudy with a Chance of Memory)”