This is not your usual Unearthed Ohio blog entry. As I went on several excursions into rural eastern Ohio in October 2016, in the last weeks of the 2016 election, I noticed something very interesting.

I noticed first that, along the rural roads and front lawns of northeastern Appalachian Ohio, the number of Trump-Spence campaign signs outnumbered Clinton-Kaine campaign signs by a tremendous margin. Indeed, on my first of the two excursions I drove for nearly seven hours before seeing a single Clinton sign—and it was in a small town rather than a “pure” rural location. Appalachian Ohio, one reliably “blue” like West Virginia, no longer seems to be.

Second, I realized that I wasn’t seeing simply the ordinary mass-printed Trump campaign signs but also large, prominent hand-made Trump signs, some of them not so much signs and shrines.

I decided that I wanted to document some of these, so I began taking photographs when I came across them. I provide a selection of such more unusual signs here, because I think they are interesting and also of historical value. Let me reassure gentle readers that my posting these photographs is not evidence that I am in any way a Trump supporter. But I do document the “unusual ideological” that I come across in my excursions across back-country Ohio.

My first trip was on October 10, where I ranged south-to-north in eastern Ohio between I-70 and Youngstown. The first “shrine” I came across was about a mile or two outside of the town of New Philadelphia. It was clear that there was some sort of story behind this exhibit. I imagined that this person originally had regular Trump signs but they got stolen, so in a fit of anger and defiance, he constructed these two large signs, as well as the ad hoc flagpoles.

Unfortunately, I do not know exactly where this photo was taken, because unbeknownst to me I had accidentally switched off my camera’s GPS.

The third Trump “shrine” I noticed was a large handmade sign, complete with incorporated Christmas lights, though they don’t show up well here, in the hamlet of Port Washington (population 569, salute!). I was on my way home by this time; it was already dark, or nearly so, so I have pumped up the exposure here to help make things visible.

I next  went excursioning almost a week later, with my friend Tsuki, and this time we were more attuned the possibility of Trump shrine sightings from the beginning. Fall foliage was our first goal but as for me, I was more than willing to be on the lookout for Trumpista material—such as this large wooden sign, nailed to two trees, that I noticed along the side of a country road about 12 or so miles east of Canton.

About five miles to the northeast I came across something that was not a Trump shrine, but nevertheless worth documenting: a “Killary for Prison” sign.

Signs like this speak to the stone soup mix of anger, suspicion, paranoia and resentment that make up so many die-hard Trump supporters.  Just the sort of people you don’t want believing that the election is “rigged.”

This Trump shrine is/was located a mile or two north of Salem, Ohio (a town southwest of Youngstown).  I have no idea what the chair on the right is for.  I have visions of the homeowner sitting up there with a megaphone shouting Trump slogans at passing cars.  Incidentally, while Tsuki and I were parked along the side of the road while I deleted some old photos from my camera to make room on my filled memory card, a carload of teenagers drove passed us and one of them shouted at us “Make America great again!” as they drove by. 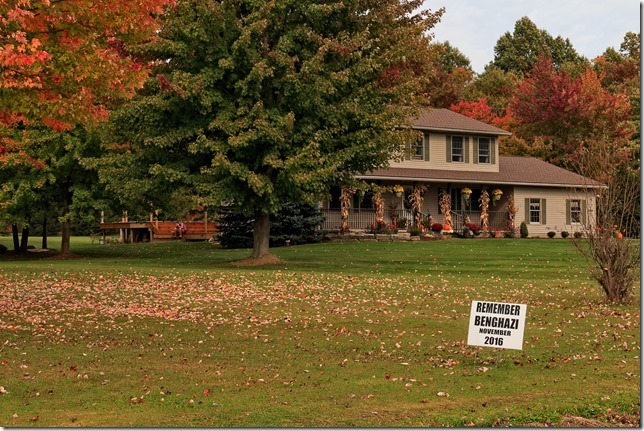 Another “resentment/anger” sign on a lawn along a rural road some miles southwest of Akron. I should note for the record that the sign does not belong to the house shown here but to their next-door neighbor. Keep in mind that this sign and the Killary sign were not handmade but printed, which suggests there could be hundreds of others scattered around the region.

This large Trump sign was placed at an intersection in the tiny hamlet of North Lima, right next to the pancake breakfast sign.

This sign, in Halloween colors but chilling for other reasons, was nailed to a tree near a railroad crossing southeast of Salem, Ohio.

This Trump shrine, complete with flags, was erected along U.S. 30 in a rural area of eastern Stark County. 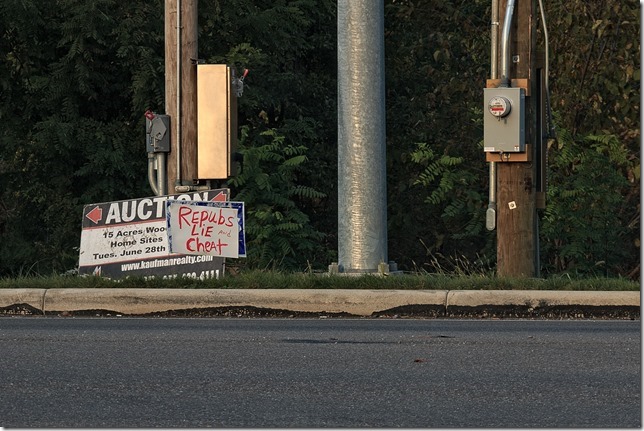 But partisan left-leaners need not totally despair.  On our way back, near an on-ramp to I-77 between Canton and New Philadelphia, we did spot this nasty anti-Republican sign.