Even when I was a child, I always wanted to “go down in history” in some fashion—hoping that some part of me would live on, even if only as part of people’s memories.  Today, many years later and pretty much in the throes of a mid-life crisis of sorts, it seems obvious to me that my chances of being remembered will be slim.   But it is interesting how people are memorialized and how they are chosen to be remembered.  We’ll see an example of what I mean, bye and bye.  The photos here are from the second half of an excursion that my friend Tsuki and I took on a bleak day in late November 2014.

We started our excursion heading east, passing through Cambridge, Ohio, then continued east and northeast into Appalachian Ohio.  That is where we encountered this abandoned home along a hillside, long since gone to seed (notice the steps leading up and off to the right).   It looked like there might have been a small amount of fire damage right above the porch on the left, but if so, it was certainly minor.  Or the discoloration might have been due to something else.  Just one of thousands of abandoned homes in the Ohio back-country, most of them keeping their secrets to themselves.

As we drove northeast, in the vicinity of Freeport, Ohio, I was interested to come across a very visible coal mine right next to the road.  Ohio was and is full of coal mines, of course, but not very many of these are actually visible from the road.  This is the Vail underground coal mine operated by the Pittsburgh-based Rosebud Mining Company.  Interestingly, it only began operations in December 2012, so it is a very new mine.  The future of coal being very much in doubt, so too may be the future of this high-sulfur coal mine.  Despite the mine only being a couple of years old, to reach the active mining area in Vail, one must reportedly travel on rail tracks for miles through underground tunnels.

Today was apparently our day for energy extraction observation, because not long afterwards, we came across a large Patterson UTI drilling rig (#256) in Stark County, drilling a natural gas well.  The rig is currently listed as “available” on the Patterson UTI website, which I gather means that it has finished drilling and can be relocated elsewhere by an interested energy company.

Of course, there is more forest, farmland and pastureland in eastern Ohio than either coal or natural gas.  Here we get to see two out of three, at least—pastureland and woods.

Not all of these farmsteads are still in operation, though, any more than the coal mines or gas wells are all in operation.  Here is an abandoned farmstead not too far from Cadiz, Ohio. 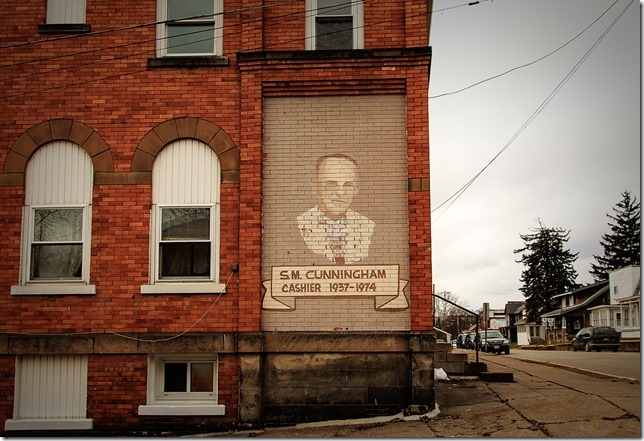 North of Cadiz is the tiny village of Jewett, Ohio (population 692, salute!), named after a long-ago railwayman.   Cadiz topped a thousand residents in 1940 but has mostly declined in population since then.  However, it does sport various murals with historical themes painted by local artist Jean Wilson.   She also painted the above very personal mural of her father, who for decades worked at the First National Bank in Jewett.  The same building hosted the bank, the post office, and a telephone exchange, as well as some apartments.  His life is summed up in a single word:  cashier.

Here is another abandoned home in rural Ohio, to this point still holding fairly well against the elements.  A family, perhaps several generations, once lived and played at this now desolate location not too far from Jewett.  But I like this photograph, bleak though it is.

Also bleak is yet another empty dwelling very nearby, newer but no more occupied than the first.  With both of these photographs, the early onset of winter adds a particularly frigid and lonely element to these abandoned works of architecture.

I am not sure that “work of architecture” can quite apply to this dwelling—which appeared to me to be an actual residence.  Surely, there’s a story here, right?  But perhaps this Confederate camper is just some sort of odd man-cave for someone who lives nearby.  Note the cats.

Tsuki and I encountered this odd fire-breathing dragon sculpture outside a small business in Carrollton, Ohio (population 3,241, salute!), the county seat of Carroll County, only a county away from the state line.  Unlike most towns and villages in this region, Carrollton is currently enjoying its peak population (though it may dip a bit in the next census).

Much of eastern Ohio is pastureland, because the hilly terrain is not well suited to agriculture.  Almost every conceivable type of livestock can be found, especially horses—Ohio is typically 5th or 6th in horse population in the United States.  The number of horses in the whole U.S. is between 9 and 10 million, the largest horse population in the world (suck it, China, Mexico, and Brazil!).  But a century ago, the horse population of the U.S. was several times larger than it is today.  As a result, nature has reclaimed a fair amount of old pastureland in Ohio, just as it has also reclaimed a great deal of marginal farmland.

Speaking of farmland, we certainly did encounter that as well, such as these cornfields (which seem misleadingly small in this photograph).  It looks like the farmer planted hay in-between the sections of corn.  Both of the above two photographs—equines and corn alike—were taken at basically the same location.  Google satellite view, as captured in Lightroom, shows the topography of these particular fields, below: 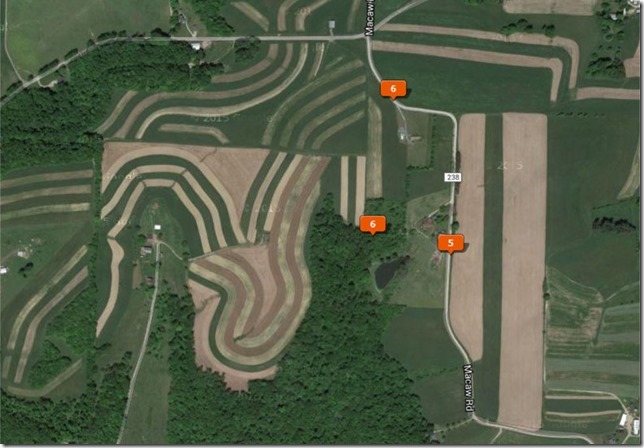 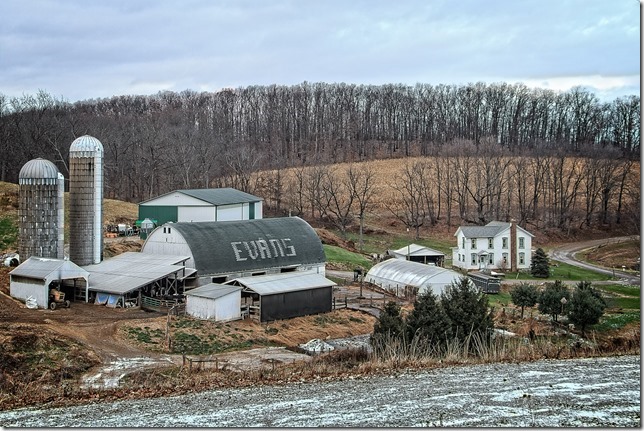 The Evans farm—not too difficult to figure that one out—had a particularly impressive collection of farm buildings for its cattle and other activities.

It was getting quite dark by this time, so we decided to head home, but not before taking a quick photograph of this colossal bovine sentinel in Minerva, Ohio.  Minerva (population 3,720, salute!) straddles Carroll, Columbiana and Stark Counties, an impressive achievement.  It is an attractive village, although I am sure that it contains a cult that worships this gigantic idol.