Excursion 40, Part 2 (Palettes of Past and Present)

Photography is, I am learning in my own novice way, in many ways the study of light.  But it is more than that, too.  It is also the study of color and of texture.  I can’t help but think that this is somehow a metaphor for living life.  Light is the world we live in, the ocean in which we swim.  Color represents those things around us, the things we see, the things we notice, the things we react to.  Sometimes these colors of life are bright and superficial, sometimes darker and more soulful.  But perhaps most important of all is texture.  Texture is richer, deeper.  No matter what the color, it is the texture that reveals the truth of something.  Texture is not so much life as how you live your life—the choices you make, the way the world wears on you—etching grooves deep into your surface.  Colors can change, but texture abides.  And as we live our life, the texture of that life defines us more and more.

If color and texture can be used to define us, they certainly define our surroundings, as we can see with some of these photographs, the product of the second half of a long October 2014 excursion I made in eastern Ohio.  In the previous blog entry, I shared photographs taken as I drove east-southeast from Cleveland, where I had been staying.  I reached my turning point at the tiny village of Salineville near the Ohio River.  In this second record of this excursion, I turned to the southwest, to head back towards Columbus. 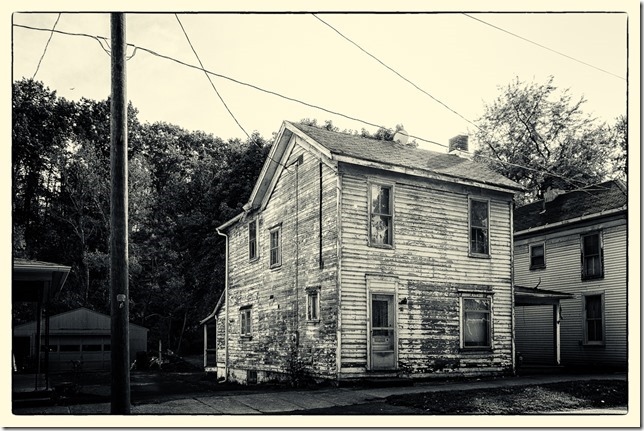 In my previous blog entry, I shared some houses of unusual construction in Salineville.  This is another Salineville residence, perhaps not unusual in construction, but attractively weathered in a way that made it seem a very suitable subject for a black and white photograph.  I absolutely love black and white photography, so any excuse to slip some b&w images in here is a welcome excuse, as far as I am concerned. 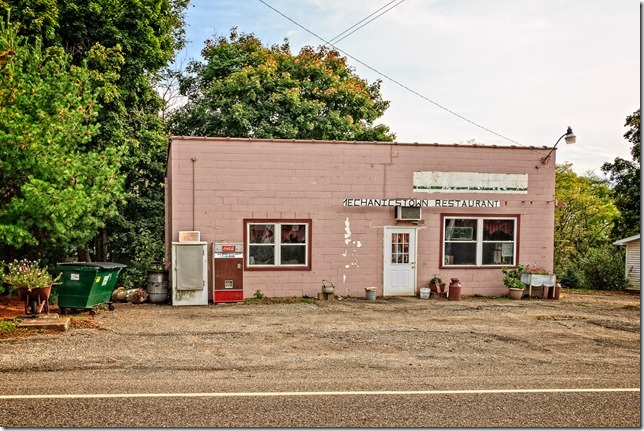 You have to admit that Salineville almost sounds like a made-up name, perhaps concocted by a novelist in search of an old-timey place name.  That novelist might have also invented Mechanicstown, which is four to five miles west of Salineville.   Mechanicstown is only a hamlet, smaller still than Salineville, but it boasts its own attractions, I suppose, including this local eatery.  I am told that it accepts reservations.

This area of northeastern Ohio, part of the state’s Appalachian region, is a glorious mix of hills and woods, and they come into their own each fall.  I am very partial to this particular autumnal photograph, which shows the roly-poly nature of this area of Ohio and also displays fall foliage to strong advantage.  Even the old barn seems to be shedding parts of itself in anticipation of winter.

More rolling hills and fall flora.  I normally avoid power transmission lines like the plague, but I thought this was a very rare occasion where the lines actually added something to the photograph, because you can see the lines begin on the horizon at the left, but then they disappear into the woods and the folds of the terrain, only to reappear on the horizon on the right, creating an invisible connection between left and right.

Fall in Ohio is so infectious that sometimes even the barns seem to be turning color in anticipation of the season.  This photograph was taken not from from the hamlet of Leavittsville. 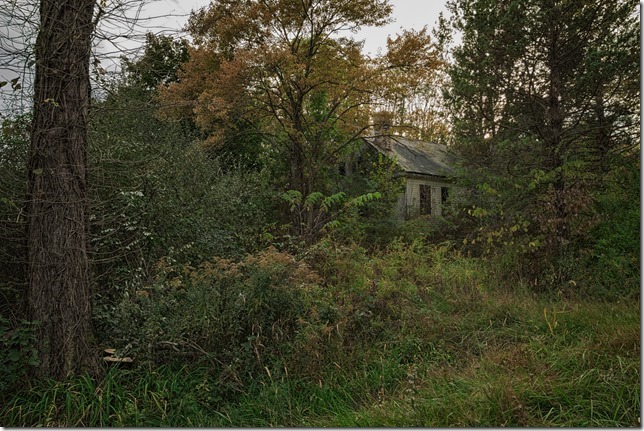 As fall progresses the vegetation begins to thin out and sometimes hidden features become revealed in the landscape.  Here an abandoned little cottage is barely visible through the vegetation, its occupants long since vanished. 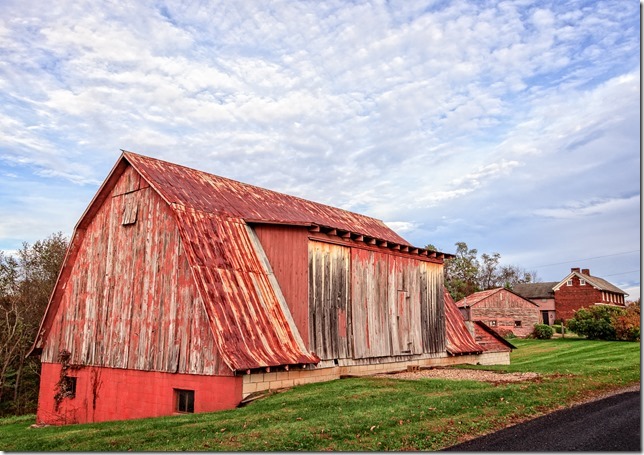 You rarely see farm buildings as, well, pink as these structures a bit west of Sherrodsville, Ohio.  This barn doesn’t just draw the eye, when you drive past it, it pretty much reaches out and grabs your eye, crushing it in a mighty paw.  The color is unusual, the structure is unusual, and all the buildings are color coordinated as well.

Very near the Pink Place is this stately manor.  Now, criticize me as you will, but I absolutely love this photograph.  It is a very static photograph of a simple residence, sure.  But, first, the house itself is quite striking, a large and solid structure with the peculiar quirk of two front doors.  Second, this photograph is full of deep reds and greens, the foliage and the house complementing each other wonderfully.  Third, there is the mystery of this house, because quite obviously there are pieces missing from this puzzle.  Apparently there was some sort of large porch in front of this house, which is completely gone now—what did it look like and what happened?  And those stone obelisks in front—what are they?  Are they the last remnant of some sort of fence around the house, perhaps anchoring a gate?   I don’t know why, but I just like looking at this photograph.  So sue me. 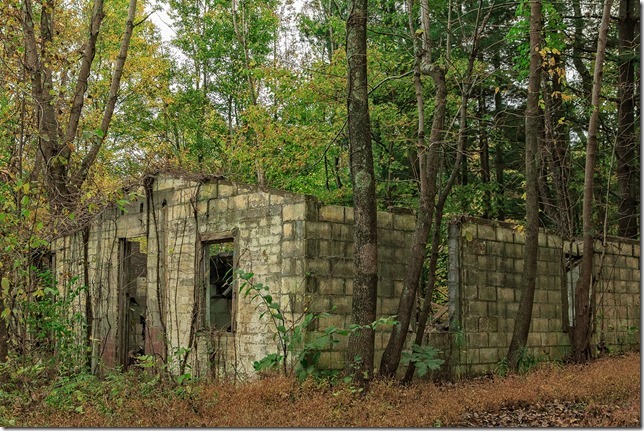 Speaking of mysteries, what original purpose did this long, low building serve, nestled in the woods?  The windows are all gone, the door is gone, the roof is gone.  Was there a fire?  Was this an odd residence of some sort?  A work structure?  It has been like this a long time—all those trees nestled next to the building clearly grew from seeds dropped by birds or squirrels perched on what was once the top of the building.  When I saw this, I kind of had the feeling that I was some sort of Indiana Jones, discovering a long-lost ruin somewhere deep in an Amazonian jungle.

I realized that the texture of this building might make a decent black and white photograph, so I decided to try to process the image in black and white and see how it looked.  The result is above—I like it, but in this case I think the dark green hue of the color version adds a bit to the mood.

By this time I had been driving a long, long time and the sun was getting pretty low on the horizon.   Here the declining light still illuminates a couple of small farms nestled in a wooded valley. 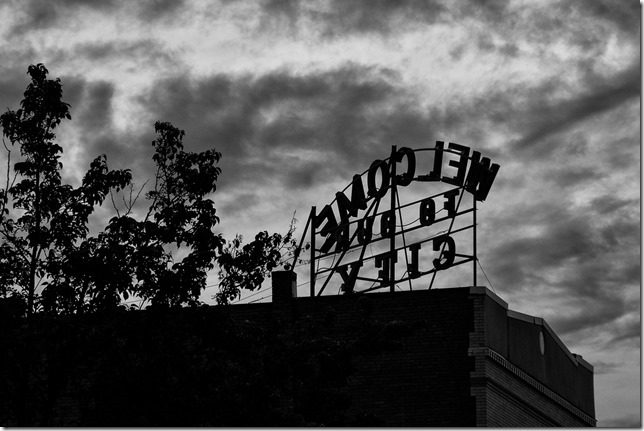 This single image is from the town of New Philadelphia.  I was only passing through, so did not linger, but I had to take at least one photograph of my favorite part of the town:  the friendly sign “Welcome to Our City” that is prominently displayed in the center of the town.  I just love it—it is so inviting and friendly.  I decided to be a bit creative with this image, deliberately shooting it from the reverse side so that you have to flip the sign in your mind in order to read it.  I also deliberately tried to get the sign in silhouette against the sky. 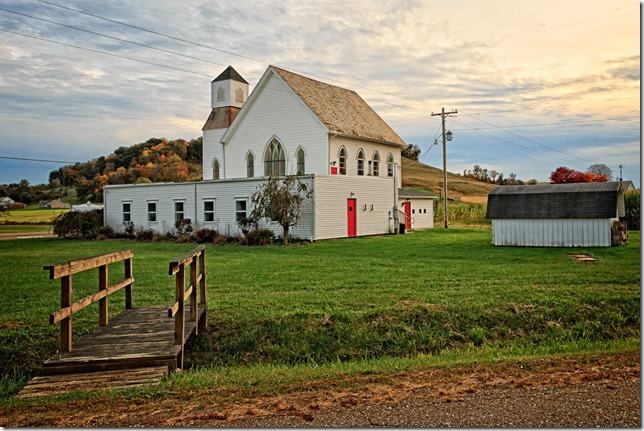 This country church is a few miles southwest of New Philadelphia.  Here you can see in action my interest in “the backs of things,” but I hope you will agree that the bridge leading to the church makes it seem inviting, as if the church is reaching out a hand to you to make it easier for you to come inside.

Whenever I come across a large, interesting abandoned house, I do whatever the mental equivalent is of pumping a clenched fist and shouting “Score!”  The white house, with its textured siding, seemed to make it ideal for a black and white photograph.

By now things were getting quite dark, a danger zone for me, as I am only beginning to experiment with low-light photography, but I was not ready to pack it in and head home quite yet.  Because of this, I was still toodling around back roads, which led me to an encounter with the above apple-chewing man and his collection of pooches.  They are a bit still here—pondering how to eat the fat man they are eyeing—but actually they were jumping around quite a bit, which is why the man had to put the apple in his mouth and use two hands on the leashes.  He graciously agreed to let me photograph him and his dogs, but I really wasn’t thinking things through, and did not change the shutter speed of my camera, which meant that many of the photographs I took were blurry because of the jumping dogs and the man’s efforts to control them.  Also, in terms of composition, I was paying more attention to the man than the dogs, which is why the dogs’ feet are a bit cut off here (although I was very close to him and even with a wide angle lens it was difficult to get them all in the shot).  This photograph was one of the ones that had 1) little blur and 2) the dogs staring at me rather than facing the other way.  At first I tried to process this image in color but it gradually begin to dawn on me that it would work better in black and white, with some good textures and some solid contrast.

The man told me that if I did this and did that I would be taken to the top of a nearby hill that had a great view looking out onto the countryside, so I decided to try it, even though it was really quite dark out.  Here is the view from the top of the hill and it is, indeed, a good hill.  I hadn’t set a specific ISO (again, I was only just starting to do low light photography and didn’t know anything), so at aperture priority, the camera defaulted to 1/60 sec at ISO 1250.  I should have set the ISO much lower and simply had a long exposure.  So this is basically just a salvage job to try to make a barely viewable photograph.  It makes me want to go back to this place and try to do a better job.

This old barn seems to be sporting the vegetative equivalent of mutton chops.

This is nothing more than a simple country farmhouse, but it seems very solid and has some nice textures, so I took a shot of it, with the hopes that it would look decent in black and white. 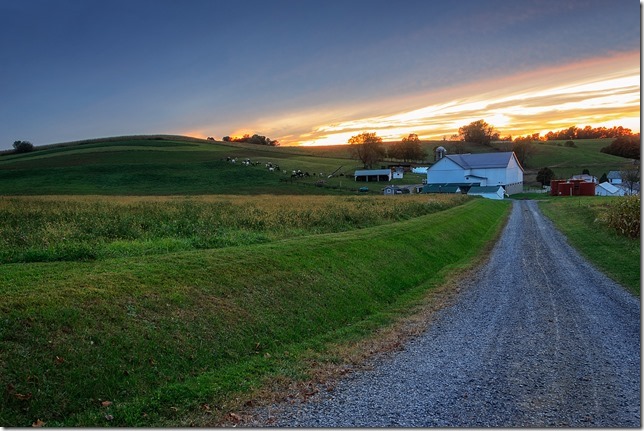 I think a nice way to end this excursion is with this final photograph, looking on an Amish farm (notice the wagon wheel tracks in the driveway) as the sun gives its final bow—as do I, until next time.

4 thoughts on “Excursion 40, Part 2 (Palettes of Past and Present)”