Ohio is a state with four seasons and, arguably, three of them suck.  But even the grumpiest Buckeye would admit that Ohio is wonderful in the fall.  This is the Ohio of the Calvin and Hobbes Sunday strips.  Cool, comfortable weather; the exciting smell of that first true fall day; the leaves, oh, those glorious leaves.  Couple all that with the human excitement of back to school, football season, Halloween and Thanksgiving, and you just have a swell old time.

Each October I spend a lot of time in the Cleveland area, on my other money-wasting hobby.  These past few years I have not driven straight back to Columbus, but rather used the fact of being in Cleveland to launch an excursion into some area of northeast Ohio.  That is what I did in October 2014 as I began my 40th formal photographic excursion across my beloved home state. 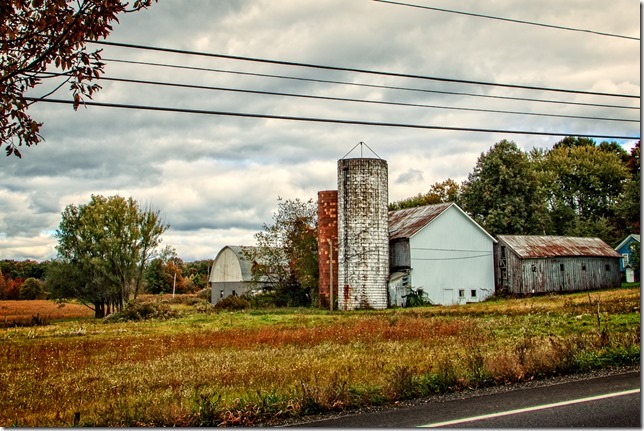 We can start with a country shot, though much of this particular blog entry is town-oriented.  This nicely aging collection of farm buildings is located more or less east-southeast of Cleveland, near a hamlet called Hiram.  Sadly, all the power lines detract from what would otherwise be a nice composition.  Lines like these raise an issue for me.  Many photographers would simply ramp up Photoshop and try to erase them—some would even replace the sky entirely with the sky from another photograph.  But to me that poses an ethical problem, as a historian, where I feel the need to represent reality more than I do the need to create the ideal photograph.  This is not to say I have never engaged in photo-manipulation.  I have done so, at a very tiny scale.  For example, I removed a distracting wadded up piece of paper from an otherwise pristine scene—but felt guilty doing so, even then.   With this particular photo, even if I wanted to remove those lines, there are so many of them and they are so close together (and there is accordingly such a limited amount of other sky that could be cloned to help replace them), that I am not sure my novice photo-manipulation skills would suffice anyway. 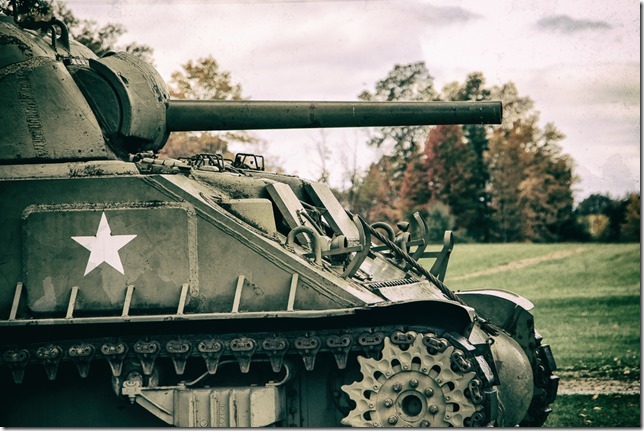 Further to the east is the village of Windham (population 2,209, salute!), only a bit over a county away from the Pennsylvania border.  Windham was a tiny hamlet until World War II rolled around and the U.S. decided to build the Portage Ordnance Depot and the Ravenna Arsenal in the area.  This major ammunitions manufactory would soon employ an amazing 14,000 people, many of whom would live in Windham.  As a result, the population of Windham jumped from 316 in 1940 to 3,946 in 1950, an increase of over 1,100%!  Not surprisingly, this population dropped in ensuing decades.  The Arsenal was shut down after World War II, though partially revived during the Korean and Vietnam Wars.   Now the area is a National Guard base, though it is still underdoing environmental cleanup even after all these years.

It seems fitting, then, that I would take a photograph of a World War II vehicle at Windham: a Sherman tank parked in front of the local American Legion Post.  I was really pleased with how this photograph turned out.  I thought I chose a good composition, plus the image has good bokeh (background blur).  The muted color tones create a strong impression, and a bit of artificial photo-aging also enhanced the image.  I occasionally post “sample” photographs to my Facebook account, just to share with friends and relatives, and I believe this was one of the most popular such photos I have ever shared.  So I must have done something right.

I was mystified by this mysterious building.  The parking lot in front makes it seem as if it is some sort of business, but there is no sign—and how many businesses have such an odd porch or construction.  When I got back home and researched the location, I discovered that this seems to be the clubhouse for a defunct golf course, the Dogwood Golf Course.  In 2011, Sally Lou Yavorski, described as “for 47 years…an owner/operator of Dogwood Golf Course” passed away; I suspect this death had something to do with the course’s closing. 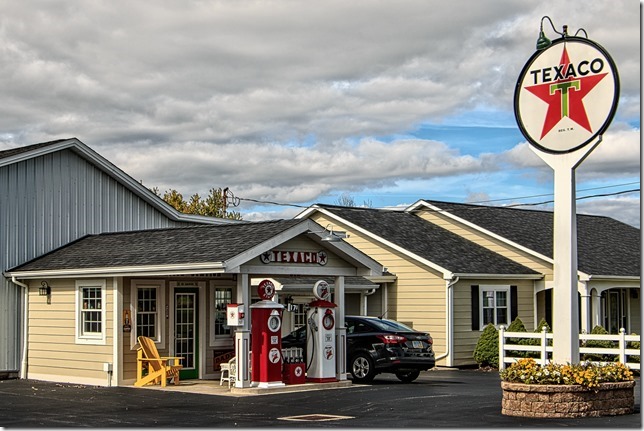 As odd as it may seem, the above photograph is not a business at all, but a residence.  I occasionally come across residences in rural Ohio that have garages or other buildings designed to resemble “old-timey” filling stations, and that is the case here.  This is not, nor ever was, a Texaco station; it is a garage.  It’s a bit weird, if you ask me.

And speaking of weird, let’s invoke a bit of the spirit of H. P. Lovecraft with this very Cthulhuian-seeming residence.  If this house ain’t haunted, someone should sue.  This ornate, Victorian house lies in the town of Salem, Ohio (population 12,303, salute!).  When Salem isn’t busy fighting off the likes of Nyarlathotep and Yog-Sothoth, it is a town near the Pennsylvania border that is over 200 years old.  Part of the Rust Belt, Salem has nevertheless only suffered slight population decline in recent decades.  American Standard, the toilet company, is still based here.  It has a lot of great old buildings, this among them.  Note the twirly chimneys.  Come on, man, this house has TWIRLY CHIMNEYS.  That’s to trap the ghosts inside.

Did someone mention TWIRLY CHIMNEYS?

Here is another example of my fixation with the backs of things.  I guess when it comes to buildings, I’m something of an ass man.  I also love brick, so this photo combines those two loves, with a third:  black and white photograph.  Backs, bricks, and black-and-whites.  This is actually just across the street from Scary Building.

State Street is kind of the main drag for downtown Salem and, as you can see, it is loaded with great old buildings, including a very still-in-operation local theater. 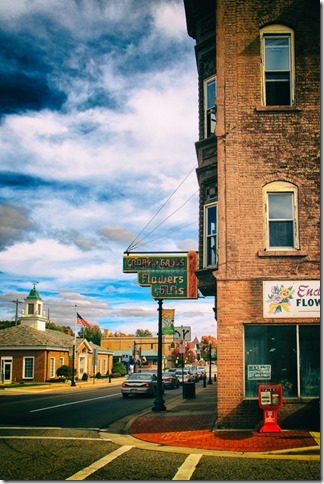 Also present on State Street is this wonderful old building and florist shop.  I mean, really, can’t you just eat this up?

Lizard Alley, one supposes.  Every time you turn around in downtown Salem, you seem to see something interesting. 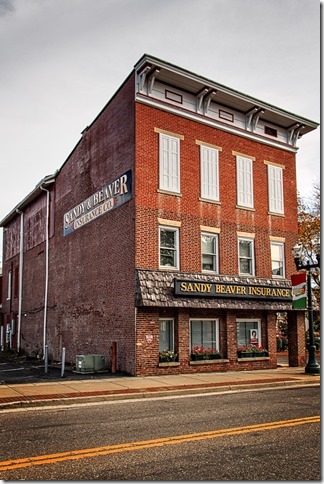 Southeast of Salem, in Columbiana County, is the village of Lisbon (population 2,821, salute!), another picturesque little community in eastern Ohio.  Among their businesses is the Sandy Beaver Insurance Company.  This is something that surely should be insured against, am I right, ladies?  Okay, I apologize for that; my inner fourteen-year-old popped his pimply face out for a second.

Also in Lisbon in the local Republican Party headquarters.  When someone said (don’t make me look it up) that “all politics is local,” this is what comes to mind for me. 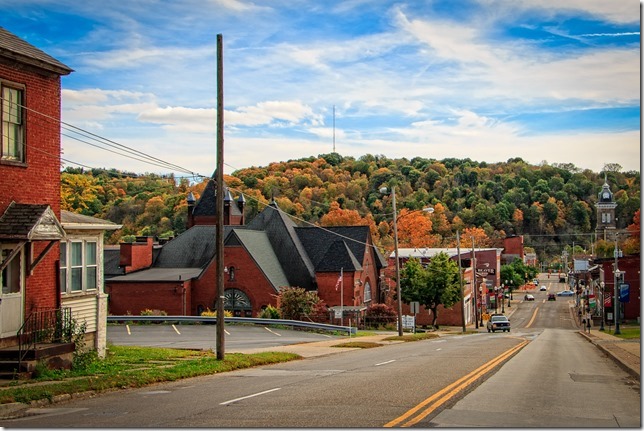 Lisbon truly is an attractive place, practically Rockwellian.  Here we see it at its best, in fall.

Of course, not location in Lisbon is dreamy.  Case in point:  this odd little house.  Note that its owner is opposed to local zoning regulations and one can guess why this might be so. 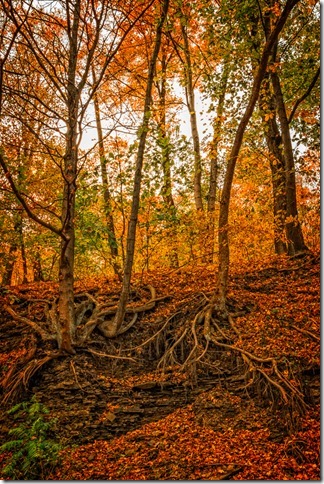 Tired of towns?  Well, we can always head out into the countryside.  This photograph was taken due south of Lisbon, in the middle of nowhere, basically.  I struggle finding ways to compose good woods shots and many such photographs remain on my cutting room floor, so to speak.  But I liked this image, not just because of the nice fall foliage, but because of the trees’ root systems trying to grab hold in the rock. 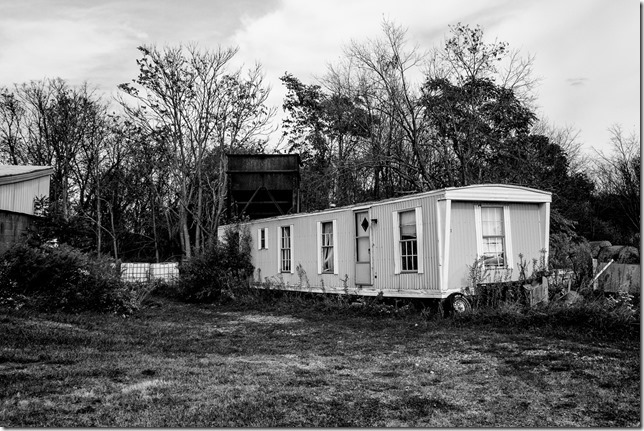 Every once in a while I feel morally obligated to take a photograph of a house trailer, since they are so common in rural Ohio and I rarely document them (because most seem so similar and because they do not age attractively).  But this abandoned mobile home provided an interesting black-and-white contrast with its surroundings.

I thought the gullies running down the rise here were interesting; I do not see them that often.  This photo is in a sense the intersection of farm and forest, with the bales of hay backed right up to the tree line.

I always like fresh-cut fields of grass or hay; here we have such fields along a woods line and a big open sky.  Kind of makes you want to run around and get silly. 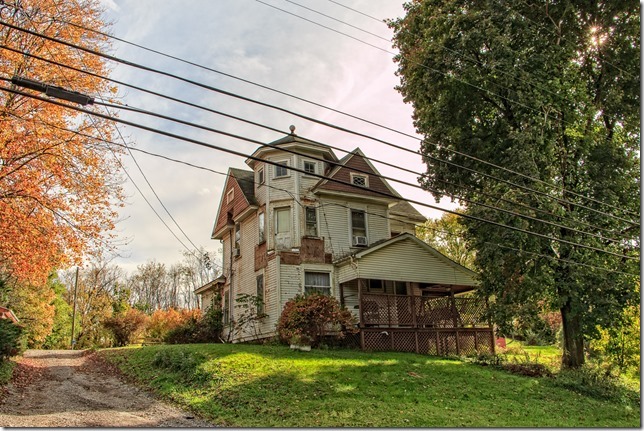 We’ll end the first half of this excursion with a couple of odd houses on the outskirts of the tiny village of Salineville, Ohio (population 1,311, salute!),   I had been in this vicinity before, which is very close to where Confederate cavalry general John Hunt Morgan ended up surrendering to pursuing Union troops not far from the Ohio River and Pennsylvania.  This old house was quite intriguing to me—especially that second floor door leading off to nothing (the first step is a doozy).  It looks like there was at one point some sort of balcony structure there, but that has long since vanished.  This would have been a pretty nifty-looking house at one point.  Note that the power lines here were nigh inescapable from the road. 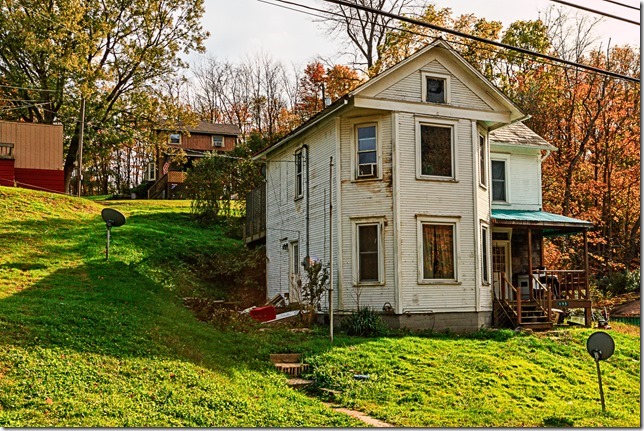 Here’s another nearby house, photographed during a relatively brief moment of sunshine on this generally cloudy day.  Its architectural style is obsolete but more common than that of the previous building.

Well, stay tuned on this bat-channel to the conclusion of this exciting excursion!