I’ve always been interested in foreign words that have no equivalent in English—unless English decides to appropriate them, such as schadenfreude.  If you think about it, without a word to express a concept, we don’t even really have that concept, do we?  Our culture is the poorer for it, in most cases.  Take the French concept of esprit de l’escalier—literally, “wit of the staircase.”  Imagine leaving the apartment of your significant other after he or she has just cruelly broken up with you.  As you trudge down the stairs, you suddenly begin to think of all the retorts and responses you should have made—only you didn’t think of them until just now.  That is the wit of the staircase.  It is a perfect concept—why is there no English word for it?

One German word for which there is no exact English translation is the word gemütlichkeit.  It means, more or less, a sense of friendliness, familiarity, warmth, and coziness.  Maybe you are curled up in a blanket in a little room in your house on a cold night, with a fire going.  You’ve got one of your favorite books in your hands and an old and much-loved friend is bringing you a cup of hot cocoa.  That might give you a feeling of gemütlichkeit. To me, the cozy part of the concept is one of the most important—perhaps it stems back to some elementary feeling of comfort and safety we all felt in the womb.  We desire to regain that feeling somehow, by being in a very welcoming but enclosed space, perhaps with some of our favorite things or favorite people, a place just shy of cluttered.

On a nice summer day in August 2014, a friend of mine, Tsuki, and I went on an excursion into southern Ohio in which we kept coming across places that evoked present or past senses of coziness:  quaint little cottages, small cabins in the woods, little one-room schoolhouses. 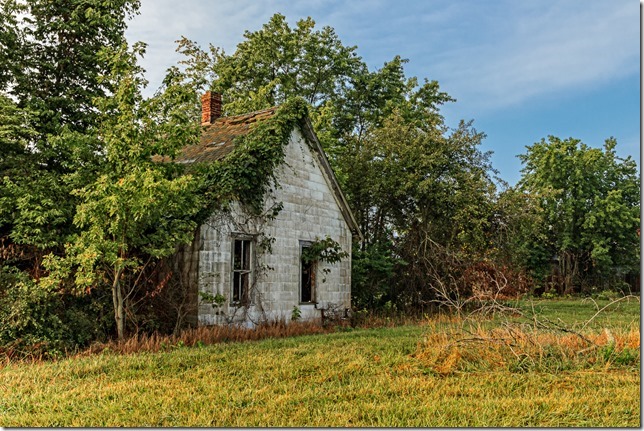 We had barely started our excursion before we ran into something once cozy—a little white house in the countryside, now abandoned and overgrown, almost given over to the trees.  Yet despite its abandoned status, there was something about the house which even now still gave off a sense of warmth and friendliness.

I notice that when I processed the photograph as a black and white photograph, some of the sense of friendliness had disappeared with the color, leaving more of a sense of emptiness. 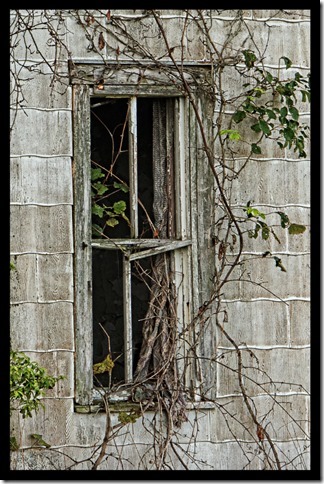 I liked even the delicate little details of the house, such as the interplay between windowframes and ivy.

Tsuki and I were in south central Ohio at this point, which typically consists of flat and fertile farmland.  The further south one goes, the more rolling the terrain gets, and the less fertile.  Early in the morning, there was still a wet mist on the horizon in most directions.

You can get a sense of the flatness of the terrain in this part of Ohio by looking at the soybean fields behind this barn.

The barn itself is one of several outbuildings belonging to an abandoned but nevertheless well-kept-up farmstead situated about 30 miles southwest of Columbus.

My friend Tsuki found the place interesting and wanted to take some photographs, so I found myself sticking around the location longer than I usually linger at any one place during my excursions.  While I was waiting, I even got out of the car to take some photographs.  Notice the spiderwebs on this fence.  A professional photographer might have thought to have brought along a spray bottle filled with water, to spray the webs and make them glisten, but I did not think of that.  But this is how they really looked to me, so at least there is that. 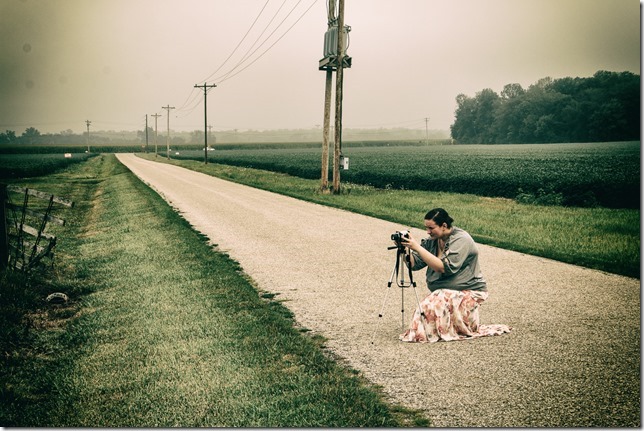 Here is Tsuki setting up her camera to take a photograph of some of the spiderwebs. 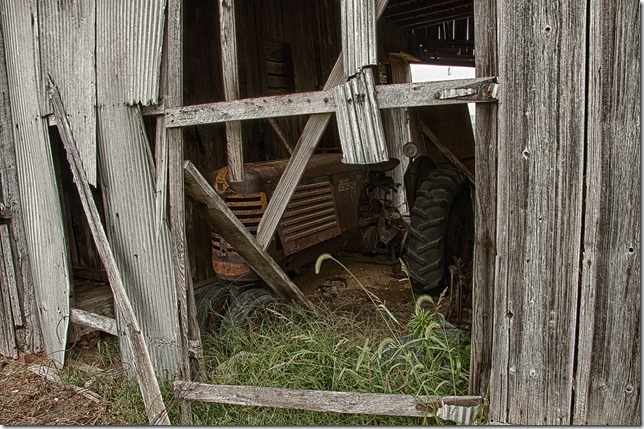 I had time to wander a little, so I did.  Peeking into one of the sheds, I found this small antique tractor, which I took an instant liking to. 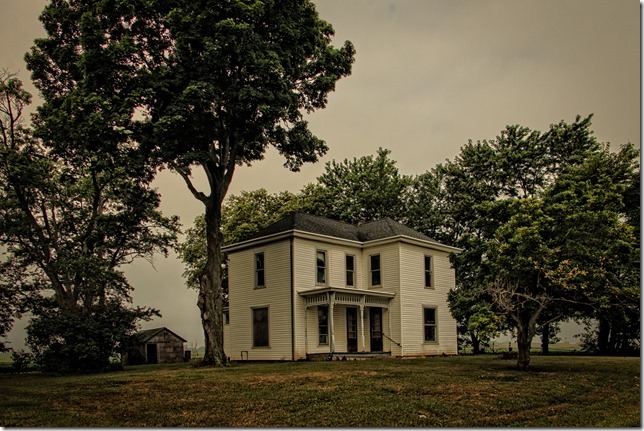 Here is the farmhouse on the property.  It looks like a nice old house and still quite livable.  I don’t know why it has been abandoned.  Often in cases like this, the previous owner died and someone else bought the farm, but they already had a house and didn’t need a second one.  Whatever the case, the current owners of the property, being good Ohioans, have made sure to keep the lawn well-manicured even if no one is living there.  Mowiness is next to godliness here in the Buckeye state. 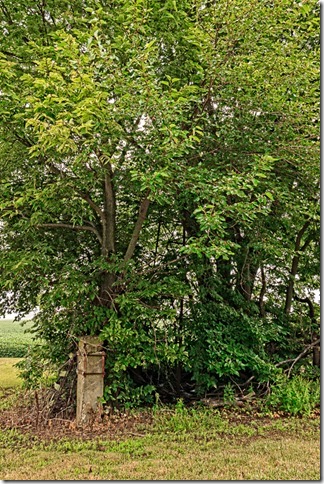 After a while, I returned to my SUV to wait.  With not much else to look at, I began to concentrate on some nearby trees.  What was odd about the trees was that they were more or less enclosed by little concrete pillars which had once separated off this area with cable or bars or wire.  Why would someone bother to do something like that?  As I continued to stare, however, I realized that amidst the trees there was also some sort of metal structure coming out of the ground and going up quite high.  It looked like it might once have been the structure for a windmill or an old-fashioned oil well.  Eventually, I came to the following theory:  there once was in fact a windmill at this location, used for pumping water.  Birds that would perch on the metal structure of the windmill would occasionally drop seeds, some of which grew into the trees we see here, eventually covering up the windmill and obscuring it from view. 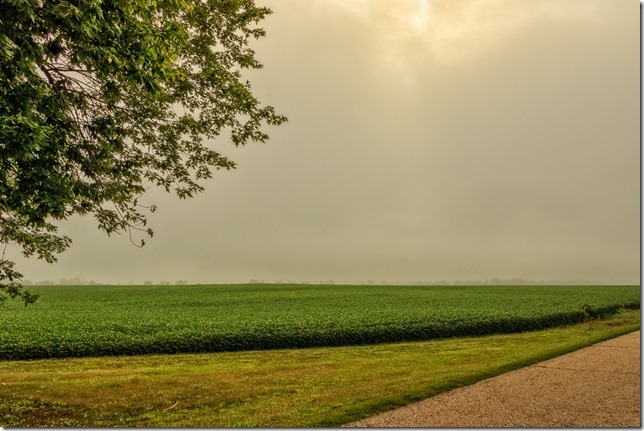 One last shot from this location, looking into the distant, hazy horizon across a sea of soybeans (along with corn, one of Ohio’s most important crops). 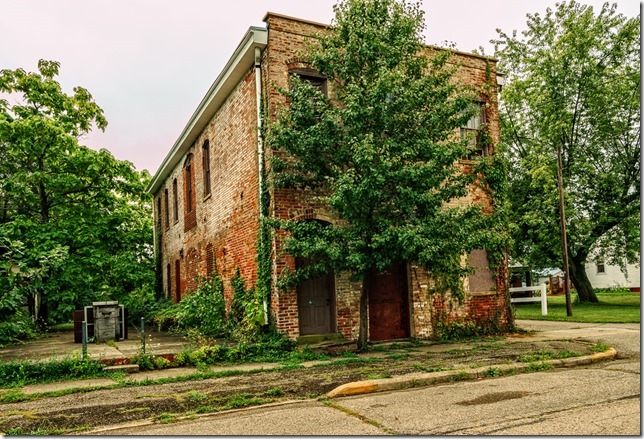 Our journey eventually took us through Williamsport, Ohio (population 1,023, salute!), a small village in Pickaway County.  Why a town in the middle of Ohio is called a “port” is something for which I do not have an answer.  With streets in the village like “Water Street,” I thought it might have been a canal town at one point, but I could not verify that.  Indeed, I could find virtually nothing about the history of this village—in contrast to so many other communities in Ohio.  Williamsport did have some old and interesting buildings, including this one.  Clearly once a business, it dates back to the 19th century and has a “preservation award” sign on it, but I cannot find anything about this address.  Stumped again by the enigma that it Williamsport.

I happened to notice that there is a typewriter up against one of the window in the building and I had a vision of some past writer living here, struggling to put his thoughts onto paper. 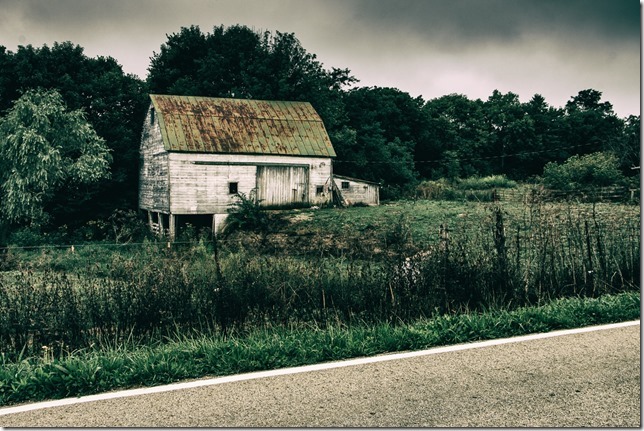 Continuing south, I came across a number of impressive old barns, with lots of character, including this one.

One-room schoolhouses began popping up with regularity.  The one above fits the dominant architectural style for such schoolhouses (in Ohio) completely.  The square above the door typically has the township and district on it, as well as the year the schoolhouse was built, but it was obscured in this instance. 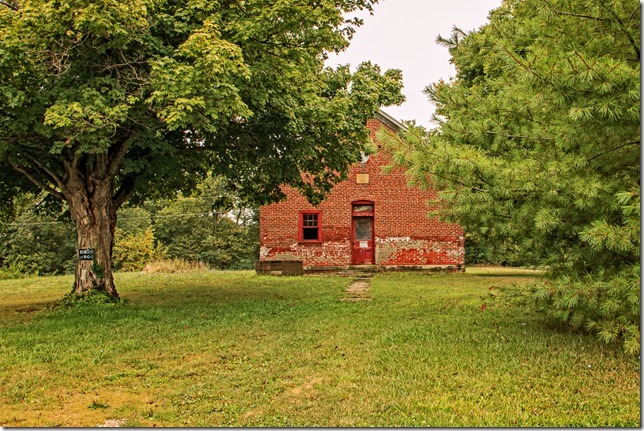 You’ll notice this schoolhouse does indeed have the year it was built:  1892.

Our wanderings took us into Chillicothe, a town of which I have come to be rather fond.  It has so many interesting little sights to see in it, including this establishment, which at one point must have been a warehouse or, judging by the smokestack, a small factory of some sort.  But I’ll be damned if I can find out a damn thing about it, which is very frustrating.  The green sign in front used to read something like “Bailey’s Western Boots,” but I can’t find such a past business in Chillicothe, either.  My desire for instant gratification cannot easily take such thwarting.  I really like this building and I would like to know more about it. 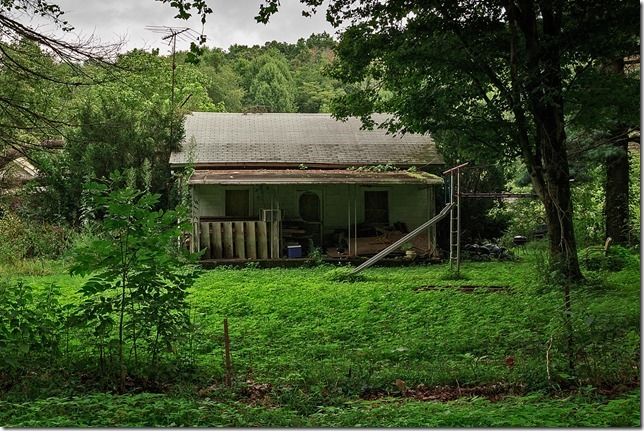 Once you get south of Chillicothe, you start getting into southern Ohio Appalachia, with more hilly, and less prosperous, terrain, as well as more woods, including a number of state forests.  This shack was a few miles south of the hamlet of Richmond Dale.

This small cabin—seemingly prefabricated—is fairly deep in the middle of nowhere in a mostly wooded area along the colorfully named Whiskey Run Road.

Deeper into the woods still, a couple of miles northwest of Jackson, Ohio, is the Witten Grocery, situated near Pigeon Creek, a back-country general store of sorts.  Note the sign advertising Double Cola and Ski.   Double Cola was created in 1924 (originally as Marvel Cola) by the Good Grape Company (later the Seminole Flavor Company, later still the Double Cola Company).  It was called Double Cola because its 12-oz. bottle was twice the size of the typical pop bottle at the time.  Ski, “a refreshing citrus soda made with real orange and real lemon juice,” debuted in 1956.  The company is actually still in business, based in Tennessee, though I had never heard of it or any of its various products before seeing this sign.

About a mile down the road, we came across this old building, which had not only been completely overgrown, but even the overgrowth was old enough to have died (remember, this excursion occurred in August, when everything should be green). 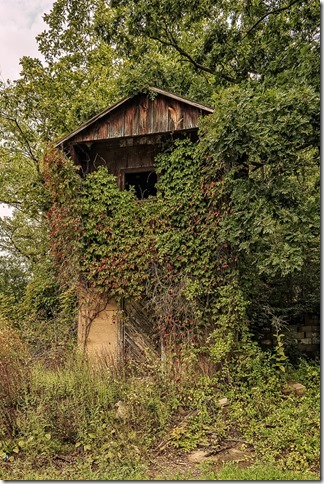 When you drive through the woods or other remote areas, you sometimes come across unusual structures the purpose of which is entirely unclear.  This particular structure is stone or cinder block on the bottom and wooden on the second floor.  It seems too permanent and substantial to have been a deer-hunter’s stand, but what other purpose it may have served I cannot fathom. 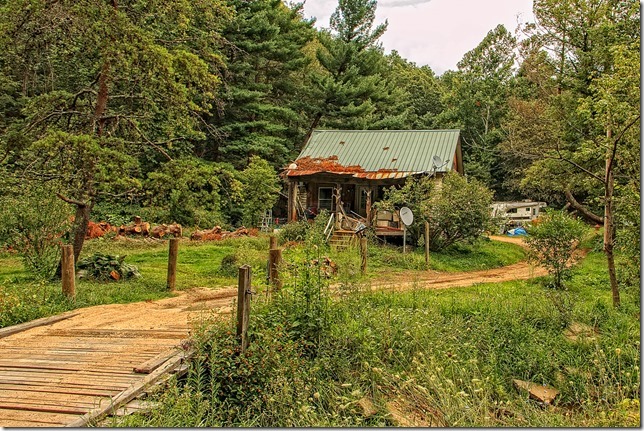 Here’s another shack, deep in the woods—but connected to the world through satellite television.  Can’t miss wrestling! 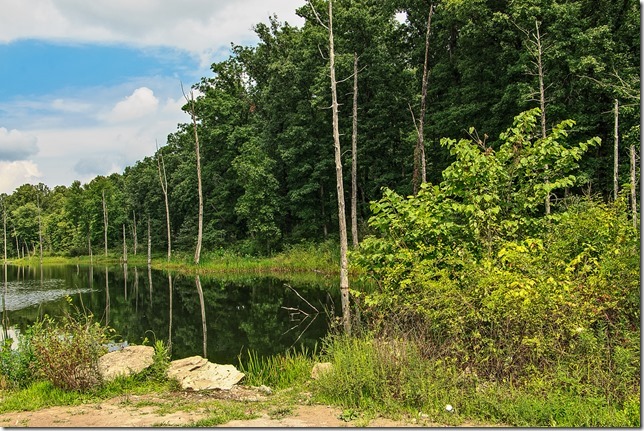 Here’s a view of a tiny woodland lake in deep southern Ohio along Mining Haul Road.

We reached our turning-back point at this farm dug out of the woods of far southern Ohio, about six miles east of Portsmouth along the Ohio River.  At this point, we decided to head back, having spent a very long, but pleasant day, driving through southern Ohio and experiencing the occasional bout of gemütlichkeit.