In 2014, I had to travel to and from Chicago quite a bit, for work, and on those occasions I tried to squeeze some extra drive time so I could, for the Ohio portion of the trip, go on some back roads and take a few photographs.  These photographs, from May 2014, were taken on one trip to Chicago.  I did not have much extra time, so once I threw away the discards, there are only a few photographs here from this trip.  But if you like western Ohio, these might be worthwhile for you.

The distance between Chicago and Columbus is very drivable, but there are only so many ways to do it, so I invariably have to head northwest.  With this trip, I began by paralleling US 33 going westwards. 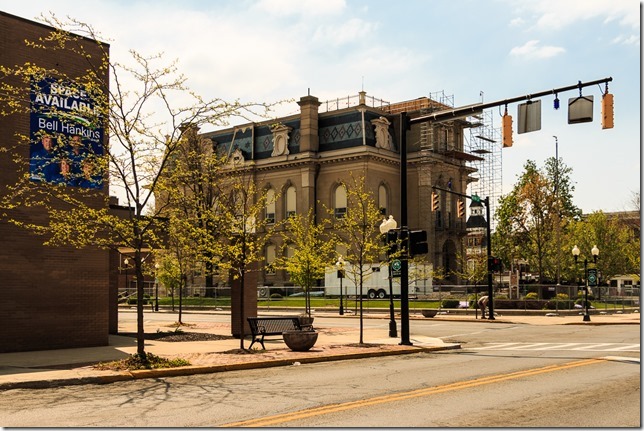 Such a route leads one to Bellefontaine, Ohio.  Bellefontaine (population 13, 322, salute!) is an attractive town that serves as the county seat for Logan County.  It also has the highest point in Ohio—something that might surprise anybody who has driven through the flatlands of western Ohio.  Unlike towns in eastern and southern Ohio, Bellefontaine has a mostly growing population, assisted by the nearby presence of a major Honda factory and associated businesses.  Income levels are better than a lot of Ohio towns, but a lot of people in Bellefontaine still live under the poverty level, which suggests that there may be considerable income stratification in the town.

The photo above is a photograph of the Logan County courthouse.  In many small towns and villages in Ohio, the county courthouse (if they are a county seat) is the most impressive building in town.  This courthouse is a very attractive building, but it is under renovation in this photograph.  What is most remarkable about this photo is something that is not there:  the entire top of the courthouse, which normally sports a clock tower in front, as shown here.  I did a little research and discovered that the story behind this is a bit surprising:  a massive windstorm in 2012 heavily damaged the tower—indeed, it almost ripped the tower off altogether.  At the time this photo was taken, the new tower was still being built.  In late 2014, the first section of the new tower was installed.

This photo probably falls into the category of “things that will interest only me,” but this is just the side of a downtown building.  At some point, it was plastered or stuccoed or something, but a big chunk of it fell off, revealing the 19th century brickwork underneath.

Even in the healthiest small towns and villages in Ohio, the old downtown areas struggle to survive.  Walmarts and mega-hardware stores and the like simply suck a lot of business out of city centers.  These empty offices illustrate the problem.  The larger building was once the home of the Bellefontaine Building & Loan Company, a thriving business in town since the late 1800s  (the building itself dates from the 1920s).  In the photo above, you can still see one of the mounts for an impressive sign that stuck out from the corner of the building, as seen in this contemporary image:

Heading west from Bellefontaine, out into the countryside, one begins to run into pockets of Amish farming settlements.  Most Ohio Amish live in northeastern Ohio, but you can actually find Amish throughout the state.

Above is a zoomed-in shot of a far-away Amish buggy.

Here we see a couple of Amish farmsteads, complete with their characteristic large, cube-like white houses. 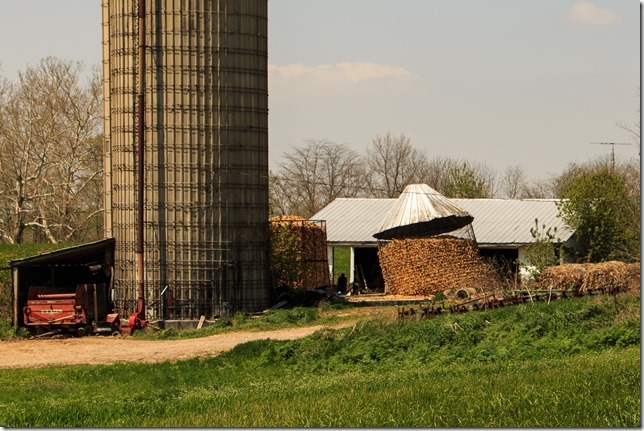 Most farms in the region, of course, are not Amish.  Here, on one such farm, are a couple of corn silos a little the worse for wear.

Here, a few miles southwest of Lewistown, Ohio,  a ruined house stands as a lonely sentinel over the flat landscape.  You may wonder why the old house is so closely surrounded by trees.  I have seen this before with ruins and my working hypothesis is that these trees grow from seeds dropped by birds, squirrels, and the like while they are on the roof of the house.

About two counties from the Ohio border is the village of Jackson Center (population 1,462), home of Airstream Trailers.  In Jackson Center is the Elder Theater—supposedly the only remaining indoor theater in all of Shelby and Logan counties.  It has had to have fundraisers in order to stay open, so I am not optimistic about its future.

This barn, weathered and be-wreathed, is a few miles west of Jackson Center.

Around this point, I headed north and did not take any pictures for many miles, not until I had gotten to almost the very northwestern most part of Ohio, where it meets Indiana and Michigan.  Here, in Henry County, I encountered the small village of Holgate, Ohio (population 1,109, salute!).  There’s not much in Holgate, as this photograph peeking over the train tracks to look at “downtown” Holgate suggests.

Before I exited Ohio for the barbarous wilderness of Indiana, I did come across this old one-room schoolhouse, with a huge hole gouged into the side.  A lot of old brick schoolhouses (which date mostly from the period 1870-1940) have since been repurposed as storage sheds.  I suspect that at some point in the past, that is what happened here—someone replaced the normal door with a large shed-door to allow tractors or other equipment inside.  Doing so might have created stresses in the wall which resulted in the additional damage here.  That is pure speculation, of course.