Excursion 28, Part 2 (The Fronts of Things, the Backs of Things)

Here we pick up midway through my trip to western Ohio, hugging the Indiana border closely without accidentally crossing over and touching something Hoosierish.   Actually, on this beautiful April day in 2014, I was just about to start circling back to the northeast.  It was great driving weather, especially since in Ohio April showers are indeed a thing.  Birds were chirping, groundhogs were grunting, and even bales of hay seemed to have their own personal message to me…

…as revealed on their plastic covering in the below photograph, of course! 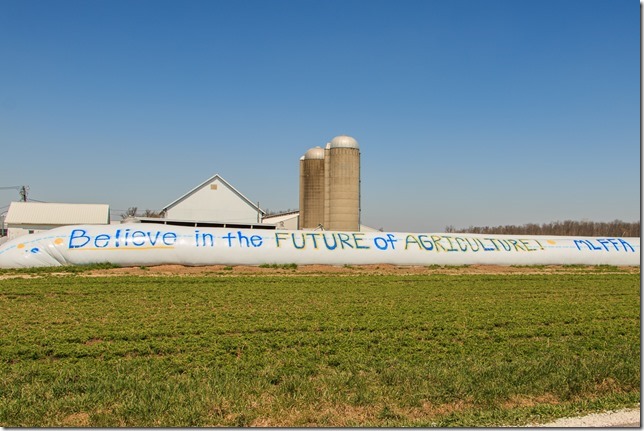 Created by the Marion Local Future Farmers of America back in the snowy polary-vortexy days of February.

Not too far away is the tiny unincorporated community of Saint Rose, hardly more than a handful of families.  Saint Rose is overwhelmingly dominated by one thing:  the impressive Saint Rose Catholic Church, which dates back to the 1830s, though this church building, the third iteration, was constructed in 1912.  Jutting into the sky in the middle of nowhere, really, it is an attractive sight—and is on the National Register of Historic Places. 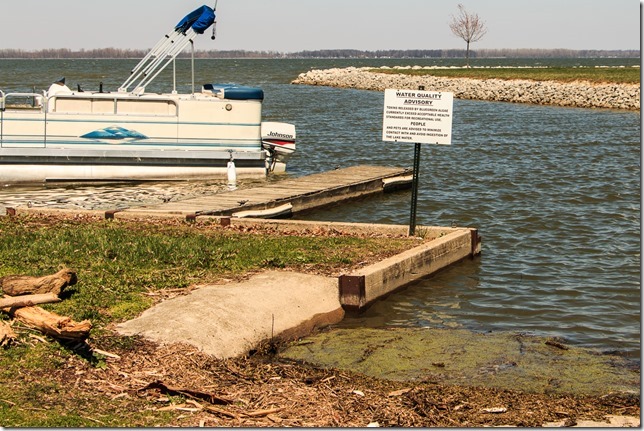 The nearest town of size to Saint Rose is named after another saint:  Saint Mary.  The town of St. Marys is situated on Ohio’s Grand Lake, which is the state’s largest inland lake and a popular regional recreational destination.  Sadly, in recent years it has frequently been contaminated by dangerous algae that has curtailed swimming and fishing in the lake.  This is the product of western Ohio’s agricultural economy, as water run-off from farms, thick with nitrates and fertilizer, causes algae blooms in the lakes into which it runs, as well as the proliferation of E. Coli bacteria.  In April 2014, signs indicated that Grand Lake was, once again, having problems. 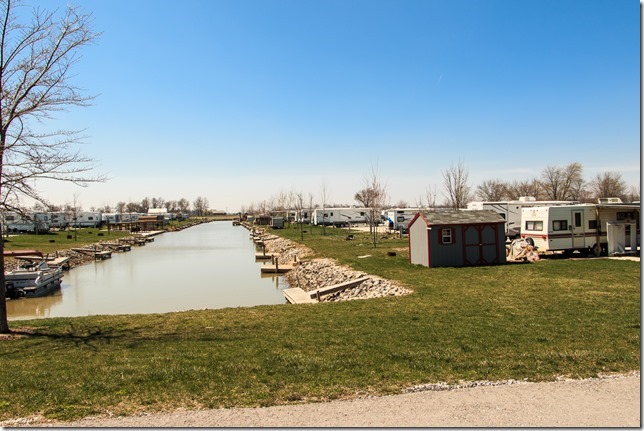 Here we can see the popularity of the lake, looking at one of the many RV parks around the lake, boasting water channels to allow one to bring their watercraft right up to their trailers or mobile homes.  Not a lot of boats on this day, due to the April time setting (early) and the lake’s contamination.

The town of St. Marys (population 8,332, salute!) dates all the way back to 1824, rather early for a western Ohio town.  It’s grown modestly but steadily throughout its history, though the population has slightly declined in recent years.

Downtown St. Marys, like the downtowns of many towns and villages across Ohio, is dominated by late 19th and early 20th century architecture in various levels of condition.  Just past the intersection, you can see a mural peeking out on the side of a building.

It turns out to be a series of murals, displaying aspects of the town’s (rather idealized) history.

This turn of the (previous) century mural was the most interesting.  Nurse or streetwalker:  you decide!

The Ohio countryside is dotted with the brick shells of what once were, a century ago, one-room schoolhouses.  Some schoolhouses back then may have been made of wood—but if so, they did not survive.  Many of the brick ones have survived, though in conditions ranging from poor to atrocious.

Down the road from St. Marys is another community, Wapakoneta, which is Shawnee for “We can beat up St. Marys.”  (Okay, actually it is Shawnee for “Place of White Bones,” but I was close).  With a population of 9,867 (salute!), it is actually bigger than St. Marys, and is the birthplace of famed you-bet-your-ass-I-walked-on-the-Moon astronaut Neil Armstrong.  It has a colorful main drag.

As you can see, sometimes an effort has been made to keep up some of the old downtown buildings, and others have been allowed to decay.  I can’t really call their downtown healthy—you’ll note empty ground floor businesses as well as businesses that are simply thrift stores. 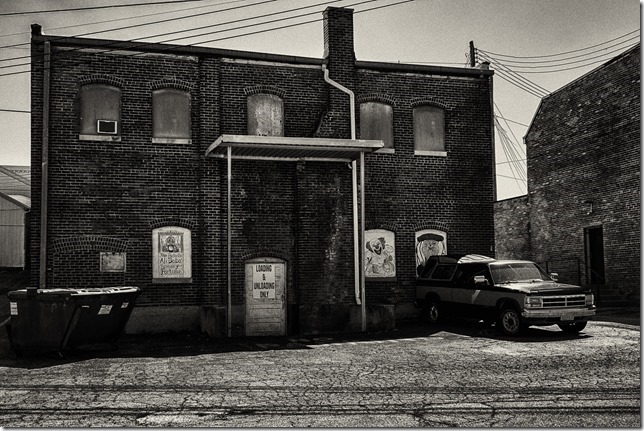 I like not only to look at the fronts of buildings but to look at the backs of buildings as well—think of them as buildings without the makeup.  The back of this building is rather intriguing, though, with its signs, including “The fantastic Ali Baba reveals your fortune.”   Makes you wonder what is in there, doesn’t it?  I’m not spilling the beans.

More backs of things.  Here’s where a worker would duck out to have a smoke during a break.

Even more backs of things, including broad expanses of decaying red brick.  I love the way brick decays and degrades—it does so in so many interesting ways and with such character.

Here’s an example of just that—that brickwork tells the story of the building, somehow.  Brick buildings wear their hearts on their sleeves.

Here we see some more fronts of things.  Note that the front of the building on the left is painted and kept up (though note, too, that it houses only a consignment store, another indication of a not-so-great economy).

And now we see the backs of things.  Here is the same building, only from the rear.  It is like an altogether different building, isn’t it?  Gone is the cheery paint job.  One would easily imagine that this building is vacant and condemned, just by looking at it from the rear. 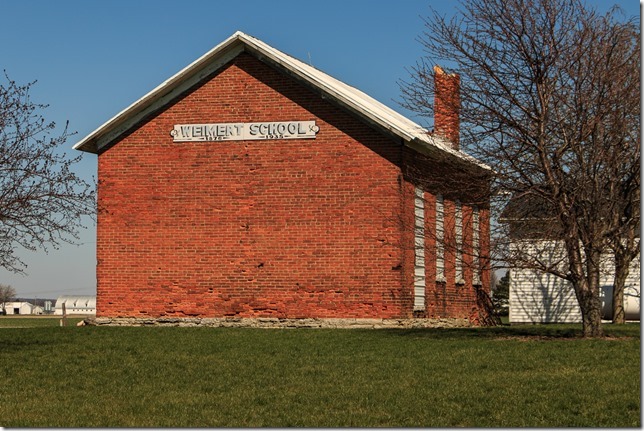 Outside of town, heading east, back towards Columbus, one comes across the old Weimert School building.  The only reason one would know this is because it has a sign—extraordinarily rare for old schoolhouses like this.  Somebody actually cared enough at some point to document the life of this building (1876-1935).  I have been unable to find out any other information about the school. 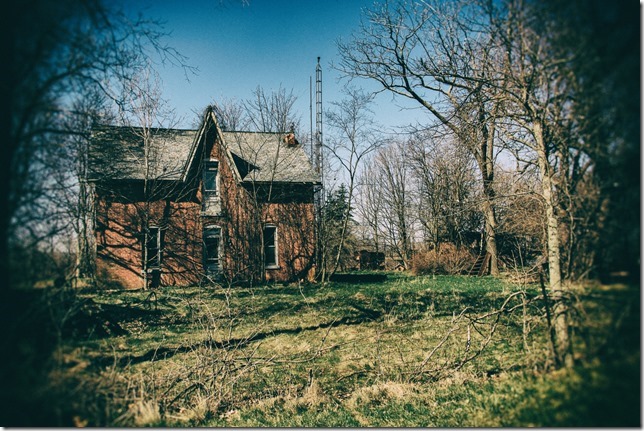 I thought this small house had quite unusual and distinctive architecture.  Too bad it has been abandoned.

Vehicles get abandoned too, such as this very blue pickup truck next to a very red barn.

Happily, however, not every old vehicle ends up rotting away somewhere.  Here a nice-looking old Chrysler peeks its head out from its garage.

And finally, an even older vehicle, from the 1940s.  I am not sure what make or model it is (let me know if you figure it out).  It always cheers me up to see preserved or restored old automobiles (I’d probably own one myself if I were halfway handy with a wrench), so I will end this excursion on that cheery note.  Better to be loved than abandoned!  That goes for buildings, cars, pets and people!