Excursion 27, Part 2 (A Glimpse of Glouster)

“Some fifteen miles north of Athens on the Kanawha and Michigan railroad,” reported the  Athens Messenger and Herald in 1894, “is situated the thriving little city of Glouster in the center of the rich mining region of the Sunday Creek Valley. It may not be generally known that Glouster claims a population of about 3,000 and is therefore entitled to a greater degree of distinction than is usually accorded the ordinary mining village.  The reporter predicted great things for Glouster, based on the below-ground mountains of coal:  “The development of the Sunday Creek Valley coal field is yet in its infancy and the field is practically inexhaustible.”  Sadly, the truth turned out to be otherwise.

The big coal boom in southeastern Ohio was over around the same time as World War II was and many of the mining companies that had come to Appalachian Ohio to exploit its mineral wealth packed up and left after the 1950s once the easy pickings were gone.  The region had always had a love-hate relationship with coal, an industry that killed and maimed its workers and scarred the countryside, but which also provided one of the most steady livelihoods in a poor, undeveloped region with no cities or manufacturing and land unsuited for farming.  When it was gone, the economy slowly started to die.

And if any village in Ohio illustrates this decline more starkly than Glouster (a corruption of Gloucester, it is pronounced GLOW-ster), Ohio.  Its 2010 population 1,791 (salute!) is less than half what it once was and prospects are few.  One mining company remains in the area, but prospects are few and many people must leave the village for work, if they can find work at all. Glouster is a poor village in a poor county (Athens).  To go to Glouster is at once to see glimpses of a more prosperous past and to be filled with pessimism about prospects for its future.

For someone like me, in love with Appalachian Ohio, it can be painful to come to a place like Glouster.  Glouster is a place that deserves better.  Its people deserve better.  But if the urban poor are being ignored by everybody in America today, the rural poor are even worse off, because even to ignore something requires knowledge of its existence.  Many people simply do not comprehend rural and small-town poverty or even know it exists.

I drove into Glouster in February 2014, partway into my 27th Unearthed Ohio excursion.  We pick up the excursion on the way to, but not yet in, Glouster.

The whole area, though, is essentially a large grave marker to the departure of big coal.  Abandoned buildings and mines, ghost towns, ruined company stores, sites of former mining disasters all dot the landscape here.  One example of that, where the above photograph was taken, is the spot called Rendville, Ohio.  The above photograph serves merely to document the odd, large colored urns that I keep finding in odd spots around Ohio, but there is not much more to Rendville than the urn.  Rendville has the smallest population of any incorporated municipality in the state of Ohio, with a population of only 36 (salute!).

Rendville was built in the late 1800s by a coal company, the Ohio Central Coal Company.  Its population consisted of miners and a few others to service the miners.  Rendville was unusual in that it was a racially mixed community with a sizeable African-American population and a white population that consisted largely of immigrant labor.  In 1888, the first African-American to be elected mayor in Ohio would be elected in Rendville.  By the 1890s, it had a population of almost 2,000 people.  This would not last.  Rendville would become one of the first Ohio communities to suffer a coal economy collapse and by the early 1900s it was only a shadow of its former self.  I have no doubt that many surrounding communities looked down at Rendville, with no awareness that their time was coming soon enough.

This is one of the few remaining houses in Rendville, a small and very oddly configured home.  It almost looks like the housing equivalent of conjoined twins, with two different structures merging with each other.

Just a little way down the road from Rendville is Corning, Ohio, which was in a way its sister community, established the same year—with more white miners living in Corning, more black miners living in Rendville.  Corning (population 583, salute!).  Like Rendville, Corning was once many times more populous, with a population of over 1,500 by 1890.  When the coal economy began to collapse in the early 1900s, Corning fared a bit better than Rendville thanks to its position as a railroad stop (see railroad, above) and many of its inhabitants became railway workers, postponing its economic collapse until the 1950s, about the same time as Glouster.

What is left of Corning, and there is not much, suggests better days in years gone by. 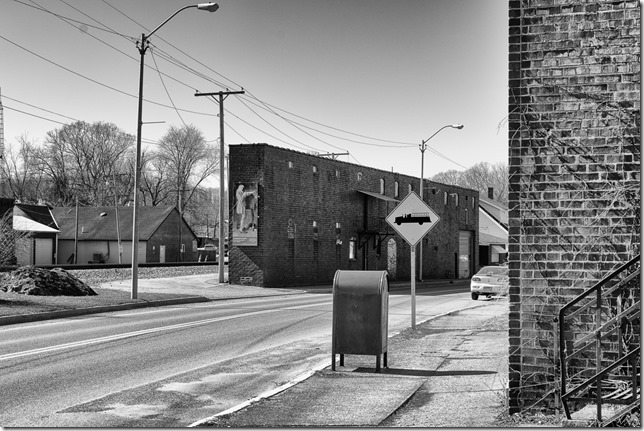 Going south down the road from Corning, one finally reaches Glouster.  Actually, the settled area here consists of three virtually contiguous communities, all mining communities.  From north to south, they run Glouster, Trimble, and Jacksonville.  Glouster is the largest.  To the left in the above photograph we see the train tracks and in the middle the extremely thin, triangular building that once was the train station (but is no more).  The railroad and Sunday Creek bisect the town.

I liked the abstract patterns made by the metal stairs, the dead vines, and the brickwork on this building. 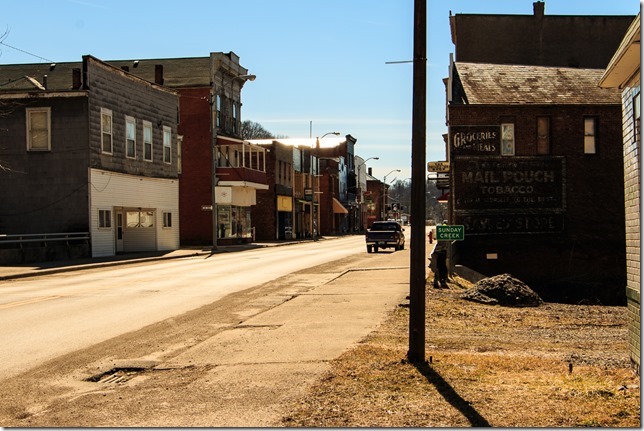 When you enter Gloster it seems like stepping back in time.  And in a way it is—none of these downtown buildings were built past the village’s long-ago heyday.  I confess that this view transfixed me.

Robbert H. Funk, whose former establishment one sees here, died in 2011 at the Hickory Creek Nursing Center at the age of 85.  He owend Funk’s Service Station and Wrecking Service and was the long-time fire chief of the town.

There have been a number of Sayres in and around Gloucester, so this was clearly some sort of family store, but I have been unable to find old references to it.  This photograph is one of my favorites of this view.

Most Ohio villages have some sort of mural commemorating the place’s history.  Glouster has one of my favorites, above.  Note the prominence of the coal miners in the middle. 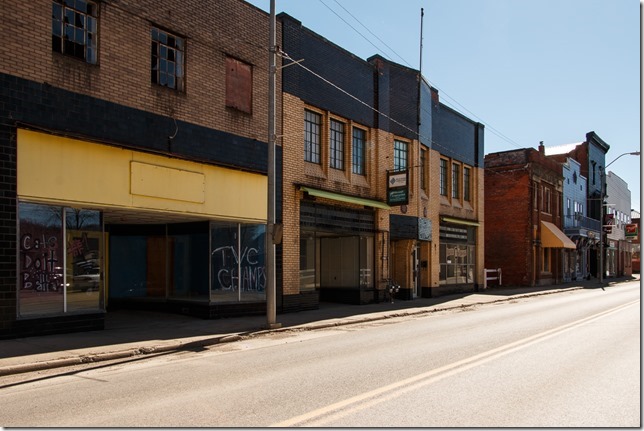 Another view of Glouster; a lot of empty storefronts.

Sam & Ellen’s Wonder Bar:  Home of the “Wonder Dog.”  Sign on the side of the triangular building.  Sadly, despite their wondrous nature, the bar and its dogs are no more.  A writer from the New Yorker noticed this sign in 2008 while writing a story on the presidential election in Ohio.  He wrote of Glouster:  “A coal-mining town with a population of fewer than two thousand (and falling), [Glouster] lies hidden amid the gentle slopes and thick woods of southeastern Ohio’s Appalachian hills. If the state is dying, Glouster was long ago left for dead. Over the past few decades, it has lost its Baptist church, grocery store, railroad depot, parking meters, four car dealerships, ten of its dozen bars, and—crucially—all but one of its deep mines. It’s become the kind of town where several generations of white families live on welfare, and marijuana is the local cash crop.”

I have learned on my excursions that sometimes the backs of buildings are even more interesting than the fronts. 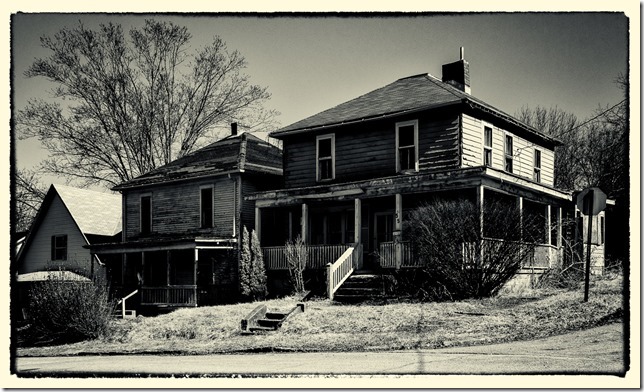 Residences in Glouster are no more promising than businesses.  Will there be a Glouster in a hundred years?

More backs of buildings.  Here we are looking across Sunday Creek at the Mail Pouch building we saw earlier.  It looks even more desolate from this vantage point.

Down the road from Glouster and its sister communities is the community of Millfield (population 341), an unincorporated former mining community that makes Glouster look like a thriving metropolis.  It used to be on State Route 13, but the state of Ohio “took” the road away from Millfield, rerouting it, so Millfield could not even depend on selling gas or snacks to travellers.  It became a backwater of a backwater of a backwater.

In some respects it is almost fitting that Millfield be a dead community, as it was the site of the worst mining disaster in Ohio history,  The Sunday Creek Mine Number 6 was located about a mile away and on November 5, 1930, a gas and coal dust explosion occurred that caused a massive cave-in, trapping hundreds of miners.  Many eventually made their way out, and some were rescued from the mine (unconscious), but over 80 miners died, killed by the blast or the fire, or trapped underground.

The population of Millfield at the time of the explosion was around 1,500; it has less than a quarter of that today.  The mine itself closed down in 1945.

Chauncey, Ohio, where this photograph was taken, is yet another old coal community.  Pronounced Chance-y, it has a population of just over a thousand.  Unlike many nearby villages and hamlets, Chauncey is considerably older, dating back to a salt works built in the 1830s.  The mines did not come until the early 1900s, and lasted merely half a century.  Now Chauncey is like Glouster and the others. 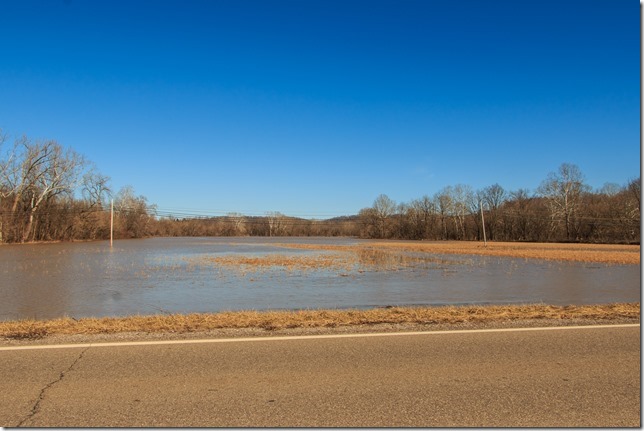 As I was taking this excursion, I had to be careful about where I drove, because recent melts of a lot of “Polar vortex” snow had caused considerable flooding in southern Ohio, as this field illustrates.  A number of roads I tried to go on were flooded, causing me to take lengthy detours.

So what is the next chapter for this area of Ohio?  Shale oil and natural gas, it seems.  Companies have been purchasing mineral rights by the armload, drilling everywhere, and building pipelines to crisscross the whole region.  The photo above shows a recently constructed and buried pipeline.  I hope for the best—I am not against drilling or fracking (the latter if properly regulated and taxed)—but I cannot help but think that this is yet another exploitative extractive industry rushing into this region of Ohio just as coal companies did a hundred years ago, providing a limited boost to the economy while taking most of the profits out of the region, only to abandon the region and its inhabitants altogether when it is no longer so profitable. 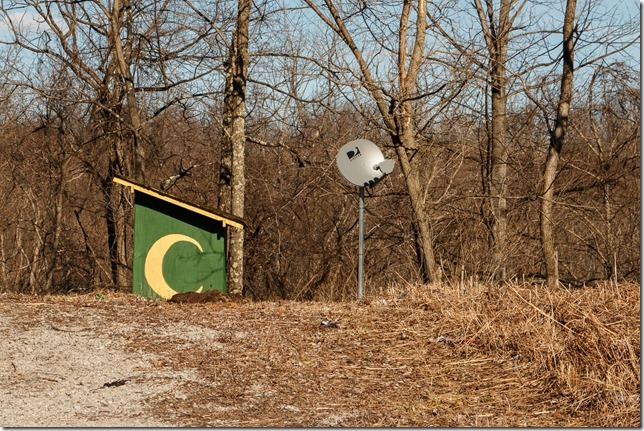 In the meantime, inhabitants can watch satellite television from the comfort of their outhouses and hope that things will work out.

Continued on next rock.