In which our intrepid hero chances upon the manse macabre…

A is for Amy, who fell down the stairs.
B is for Basil, assaulted by bears.
C is for Clara, who wasted away.
D is for Desmond, thrown out of a sleigh.

Those are the first few lines of the Gashlycrumb Tinies, an alphabet book consisting of 26 different children meeting untimely ends.  The Tinies are the work of Edward Gorey, a rather amazing author and artist, whose distinctive visual style was a sort of goth Edwardiana.  I first encountered Gorey in high school and fell in love with his dark wit and unique artistic style.

Little did I know that a bit more than 30 years after I discovered Gorey that I would encounter a mansion that looked as if it came right out of one of his books.

Each January I travel to the environs of Washington, D.C., to participate in a tournament for a strategy game that is a hobby of mine.  In January 2014, I decided to combine my journey to D.C. with a  photographic excursion, exploring a bit of Ohio before jumping back on the interstate and driving east.  On this particular occasion, on January 14, 2014, I explored a stretch of Ohio east southeast of Columbus, my starting point.  It is the gateway to Ohio Appalachia and contains rolling hills and many interesting sights.  Despite this being the winter of the Polar Vortex, the conditions weren’t too bad outside; the temperature was only in the forties, though it was overcast.

I had good omens about the excursion.  I very quickly began seeing some interesting old buildings, though some of them I was not able to photograph because of traffic.  I did, however, decide to take a shot of this old farmstead, added to by a more modern garage.  The house is in need of some work, but it is still occupied, according to a neighbor. 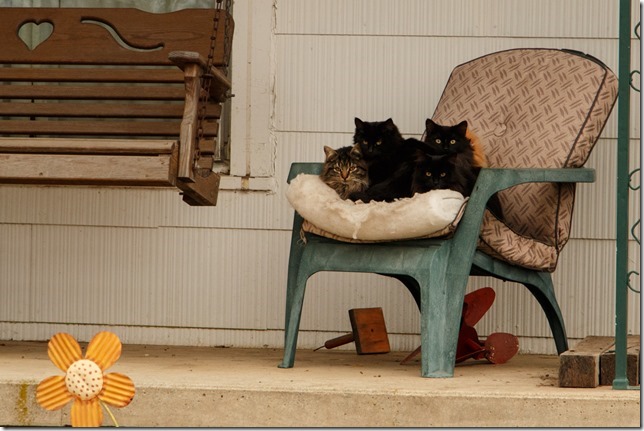 Once I got onto more back-country roads, there was a lot less traffic.  There were some curious eyes, however, who monitored every passing vehicle.

This was actually the second “cat house” I’ve seen in my excursions.  The first one had more cats (there are only eight in this photograph), but these cats are more at ease than the ones at the first house—who were probably expecting dinner.

The winter weather made everything look a bit more grim, including these stables. 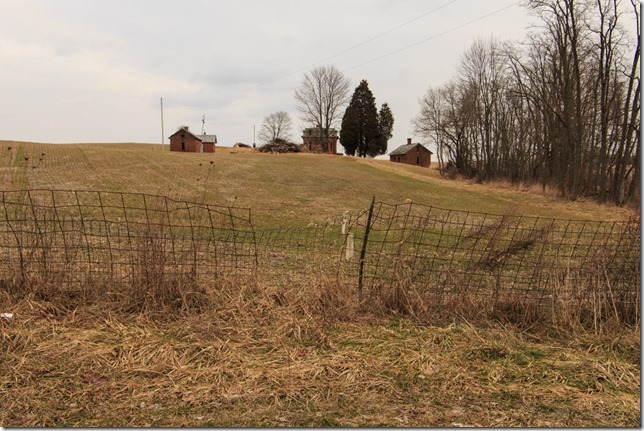 But let’s get to the main event, shall we?  The first hint that I had discovered something came as I drove past a slight hill and started to see the tops of buildings peeking out from beyond the swell of the ground.  Even from a distance, a couple of things were clear.  These were quite old brick buildings and they were all of a piece—buildings designed to match and quite possibly built at the same time. 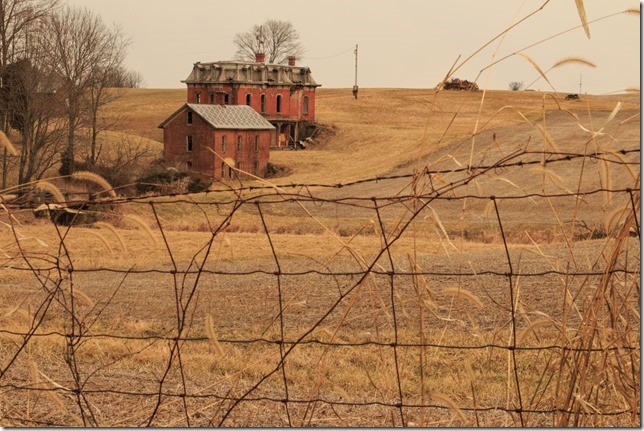 I continued down the road, Mud House Road, and was able to see the buildings from a different angle.  A couple were small outbuildings, perhaps used for agricultural work, while there was a larger building that was a residence of some sort and an even larger mansion with a highly distinctive architecture.  Indeed, in all my travels around Ohio I had never seen a building like this one before.  It was built right into the hill, with tall narrow windows and an elaborate and ornate top.

What I had discovered was the so-called “Mud House Mansion,” a structure well-known to locals (it lies a few miles east of Lancaster, Ohio) but largely lost to the outside world.  One would think that this might have belonged to a family named Mud, but that seems not to be the case.  The road the property is on, Mud House Road, was named for an old and no-longer-existing house (allegedly built of “mud”, although someone who once lived nearby described it as being built of “mortar and fieldstone”).  That house eventually became ruined.  Over time, the name of the road got transferred to the building shown here, which is not the original “Mud House.”   It would probably be more properly called the Mast-Hartmann House or the Rugh-Mast House, based on various owners of the property.

Accurate information on the house is very hard to come by.  In the early 1800s, two men allegedly owned the land:  Abraham Kagy and Henry Byler.  They sold it to Christian and Eleanor Rugh, who allegedly built the house in the 1840s or 1850s.  However, others have noted that the architecture style of the roof actually dates to the decade or so following the Civil War, so they may have built a house on the property earlier (maybe even the smaller residence below), but not necessarily this house (i.e., the mansion) until later (or, contrarily, it could have been built earlier and remodeled later, though I doubt it).  In the early 1900s, the property was later sold to Henry and Martha Hartman, then inherited by daughter Lulu Hartman-Mast circa 1930.  Ostensibly an elderly niece of Lulu owns the property now.  How long it has been abandoned is another issue in great dispute; the house is the subject of an amazing number of frequently repeated and unconfirmable rumors (not to mention amazingly ahistorical stories about it being “haunted”). 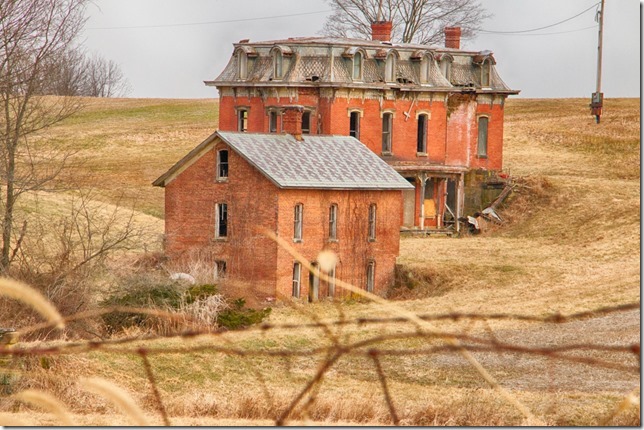 The structure is so amazing that it is a shame that it was ever let to go to ruin.  For many decades, it has been a site of countless trespassings, by transients, kids in the area, haunted house hunters, and photographers.  Judging by photographs and accounts of interlopers, the house seems to have been abandoned with much of its furnishings and furniture intact, though all that has been trashed, ransacked or stolen throughout the years.

You can see that I have tried to render this view in a number of different ways, to try to capture the feelings that the place evokes.  This image may be the most Edward-Gorey-like. 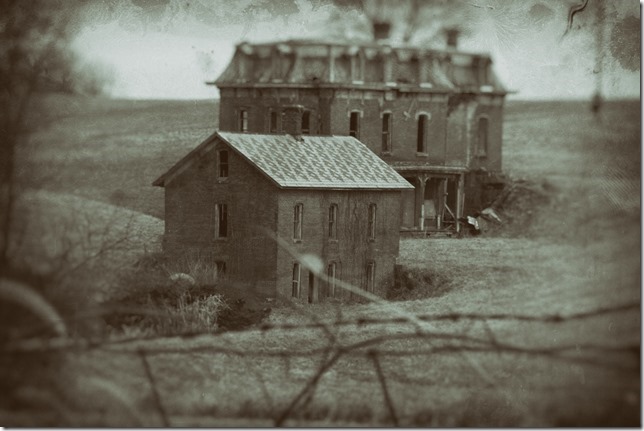 Many of the photographs you may find of the mansion have an angle similar to these, because there are few vantage points from which to view the mansion (unless one wants to risk trespassing onto the property).  Later, I decided I wanted to go back and take some more photographs, trying to see if I could get some different angles, which I did, later in 2014 (stay tuned), although someone ran into my vehicle while I was driving out to the mansion, making it a bit of a frustrating revisit.

One doesn’t have to go very far east of Columbus at all to get into “oil country” in Ohio, and scenes like this are common. 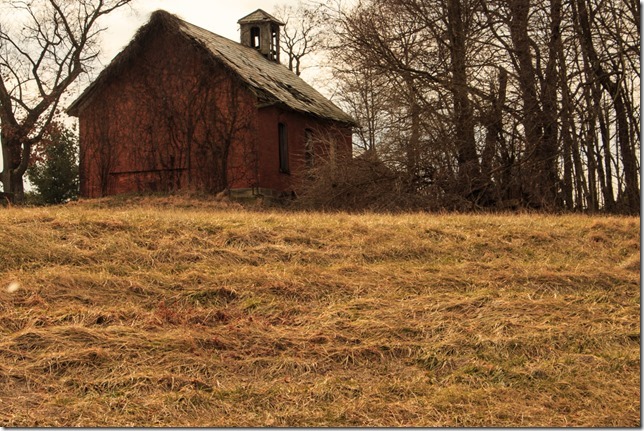 So, too, it turns out, are scenes like this, more or less.  People who have followed this blog since its beginning may notice that I have featured a number of buildings similar to the above building in various of my photograph excursions, but it was not until this particular trip that I learned that they were old one-room country schoolhouses (as I was told by someone who lived next to one).  Thus it has only been in the past few blog entries that I have been labeling them as such.  This particular example, however, was a real find, something I began to suspect as soon as I came across it, approaching it from the rear. 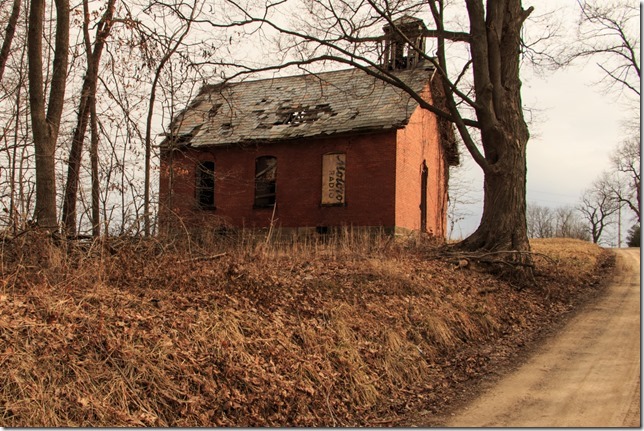 I was able to circle around it and approach the building from the front.  It has a wonderful ruined quality to it, making it the second big “find” of the excursion, second to the Mud House Mansion; together they would really make the trip worthwhile.  All sorts of little details, like the Motorola sign used to board  up the window, make this old schoolhouse a great subject for photography. 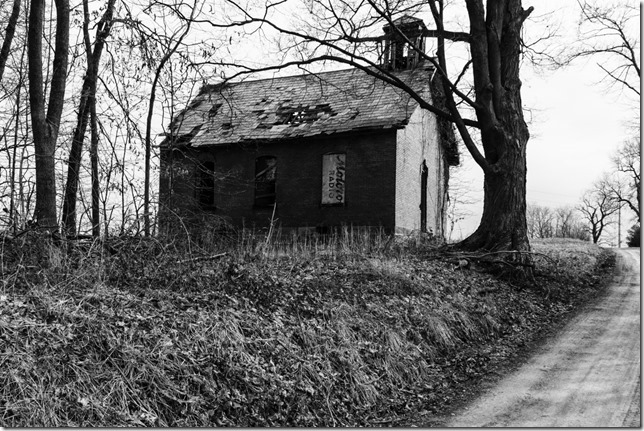 The foliage and brickwork combined to make a rather monochromatic scene, though with good contrasts and textures, and those are both signs that the scene might be a good subject for a black and white photograph.

Here’s a shot of the front of the building, highlighting the cracks in the brickwork as well as the ivy that takes it over, at least in the summer.

Next to the schoolhouse is a lone gravesite and memorial stone.   Combined, they really do create a desolate feel.

This old low barn is not desolate, but it is still fairly lonely. 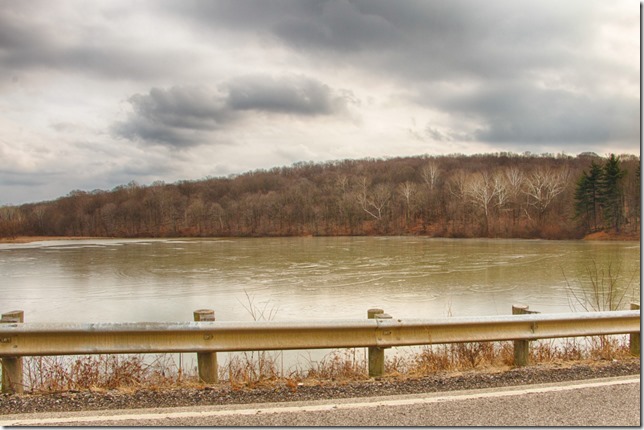 I thought this was a nice shot of frozen-over Clouse Lake, a tiny reservoir lake near Somerset. 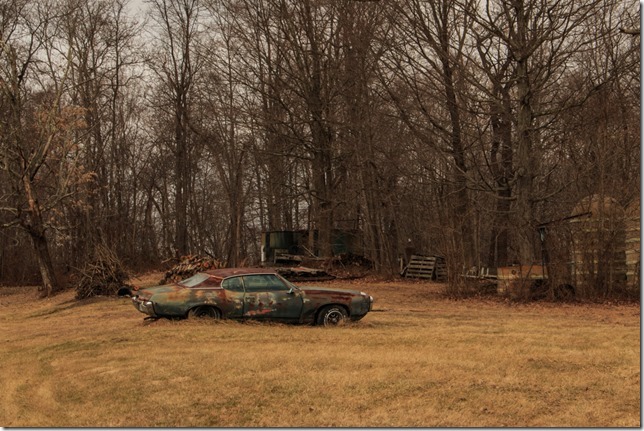 if we are going to show abandoned buildings, we might as well show some abandoned cars.

I really really want an old car like this.  Whenever I see something like this, I wish I was automechanically inclined, so that I could buy and restore a classic vehicle.

A large, abandoned wooden farmhouse.  This normally would have been a nice find, but I was spoiled by the mansion and the schoolhouse.

This is an unusual structure in Roseville, Ohio, a village of 1,852 (salute!) in Muskingum County in southeast Ohio.  It was another eastern Ohio pottery town—from the 1800s through the early 20th century, pottery was one of the major industries of eastern Ohio.  The last big pottery company in Roseville, the Robinson-Ransbottom Pottery Company, shut down in 2005.  It seems to be a rather economically depressed area, with a per capita income of less than $13,000 (993rd on a list of 1,065 Ohio communities by per capita income).

This was a pretty odd building.  Usually, when one sees a building with columns like this right up against the street, it is a sign that the building was once an old gas station (vehicles would drive under the overhand and gas up).  However, I’ve never seen an old gas station that had such an elongated back to it—was this also some sort of old boarding house?   Most recently, it seems to have been an apartment building, though it does not seem currently in use.

And here’s one final shot of an abandoned farmhouse.  If I told you that the last owners of this property had died of a mysterious wasting disease, you’d probably believe me, wouldn’t you?  That is just the sort of feeling this place evokes. The house has been damaged by fire in several places and it is perhaps a bit surprising that it still stands.