Death comes to us all in the end, but you never know how news of the deaths of others will affect you.  Although I mourned their passing, the actual deaths of neither of my maternal grandparents caused me true sorrow, because in both cases, the circumstances of their passing meant that death, when it came, was something of a blessing.  The relief of their suffering outweighed the sorrow of their absence.

The circumstances of death thus play a large role in how deaths affects us.

One of the deaths in my life that affected me the most was the death, in 2000, of the man for whom I had worked for the previous five years, William Reed.  Bill had worked as a police officer and as a law school professor.  In the late 1960s he became the first head of what is now the Florida Department of Law Enforcement.  He then served as executive assistant to Clarence Kelly, head of the FBI, and also as liaison to the Watergate prosecution team.  In the late 1970s, Bill established the Institute for Intergovernmental Research, which provided a wide variety of programs for the Justice Department to help deal with everything from gang violence to white collar crime to terrorism.  He died suddenly, of a heart attack, at his home in Albuquerque, New Mexico, at the age of 64.

Out of the many people I have known in my life, Bill Reed was one of the ones whom I most respected and admired.  He certainly had his flaws, and he was idiosyncratic, but he was a very good man, professionally and personally.  Unlike so many, he shunned the limelight, preferring to find ways quietly to help solve problems.  I loved working for him.  He was energetic, enthusiastic and good-natured.  He saw potential in me and encouraged what I did.  Were it not for him, I would not have had the career or personal success that I have had.  In some respects, he was sort of a father figure for me.

Bill headed IIR, but took a personal interest in the anti-terrorism program of which I was a part and spent much of his time with the program.  In the summer of 2000, we learned that the federal funding that had underwritten this particular program would not be renewed.  I personally would be out of a job by the end of the year.  Because of this, I ended up leaving IIR that summer, something that was very painful to me.  The people I worked with were like a family and I hated leaving them.  And it was just shortly after I left that Bill died of his heart attack.

For me, then, the completely unexpected news of Bill’s death, sudden and unheralded, except for high blood pressure, was a shock amplified by the fact that I had left IIR.   Not only was Bill Reed gone, psychologically I could not help but feel that it was as if my leaving was responsible for it.  Thus both the timing and circumstances of Bill’s death combined to have an even greater effect on me than would otherwise have been the case.  I was distraught for some time.

But even though people pass, the signs of their presence often live on, in one form or another.  Loved ones may memorialize them in words or in stone.  And the works they have done—the houses they built, the children they had—those things can live on, too.  The good that Bill Reed did in the world while he was with us does live on, in a variety of ways.

I would see various signs of these previous presences in my 22nd excursion across Ohio, conducted on November 9, 2013, a journey into southwestern Ohio on a beautifully sunny autumn day. 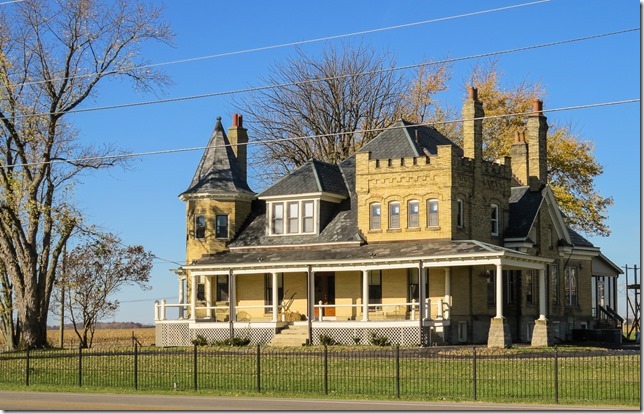 Not far outside Columbus, one of the first interesting sights that I saw was this amazingly grand, castle-like old home, with spires, crenellations, multiple chimneys, and a glorious front porch.  I would love to own this home and it puts all the McMansions being built every day in rural America to shame. 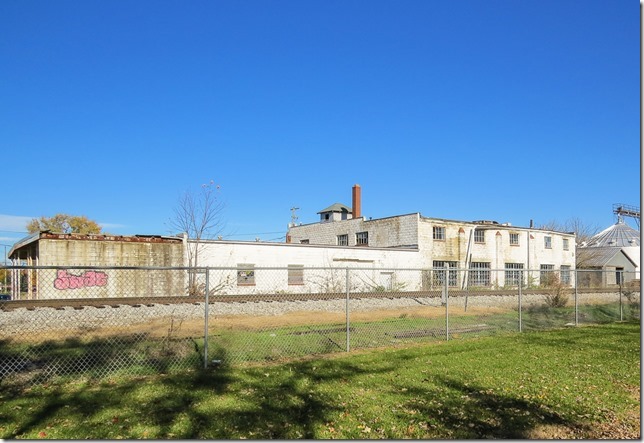 Somewhat to the southwest of Columbus is the village of Mount Sterling (population 1,782, salute!).  I am not 100% sure what this old establishment, seen here from the rear, is being used for—it may now be the home of a heating & cooling company.  Its original purpose, located next to the train tracks, was almost certainly industrial.

Mount Sterling is home to what seemed to be an unusually high number of white painted houses and structures.

One can only assume that there is a nearby well of white paint that allows it to be very cheap.  That’s all good with me, since white paint often shows the most visible wear and tear the quickest.  These photos, taken relatively early in the morning on a weekend, have a bit of that post-apocalyptic feel to them, as if all the people in this village had suddenly vanished. 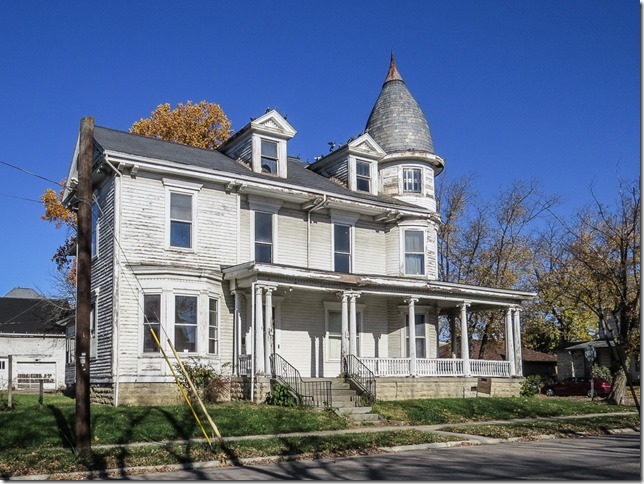 Some of the old (but still white) houses in Mount Sterling retain a certain grandeur. 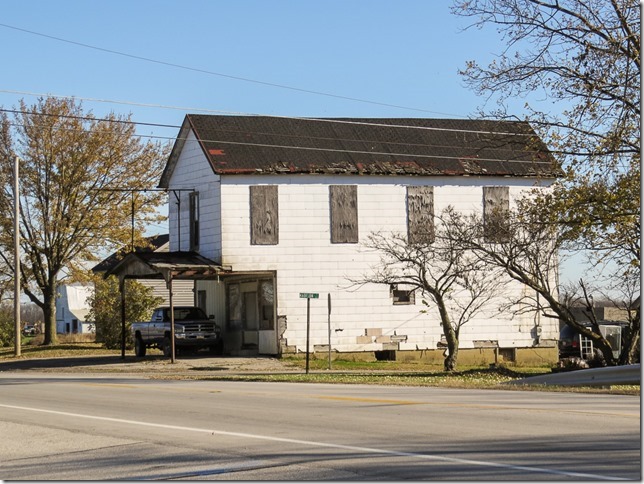 This building almost certainly was a gas station some 70-80 years ago, and perhaps a little general store as well.  Now it just seems to be a carport. 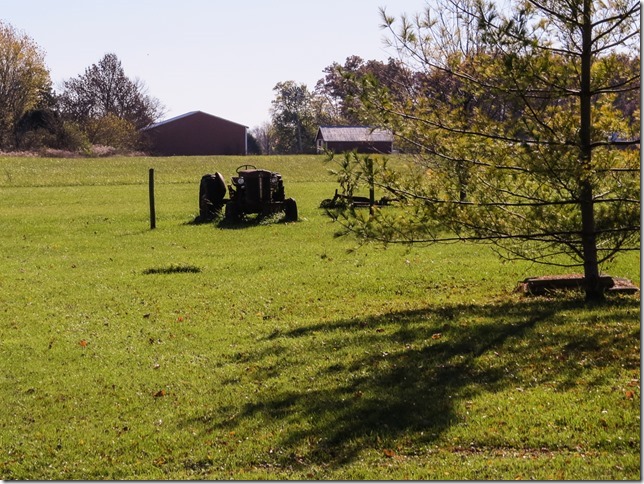 I mentioned in a previous blog article that one finds these tiny old tractors abandoned everywhere across Ohio.  It is as if at one point they were autonomous robots exploring Earth, but the mother ship was unexpectedly called home, so now they sit motionless wherever they were when they stopped receiving signals, waiting for the mother ship’s return.  Or maybe not. 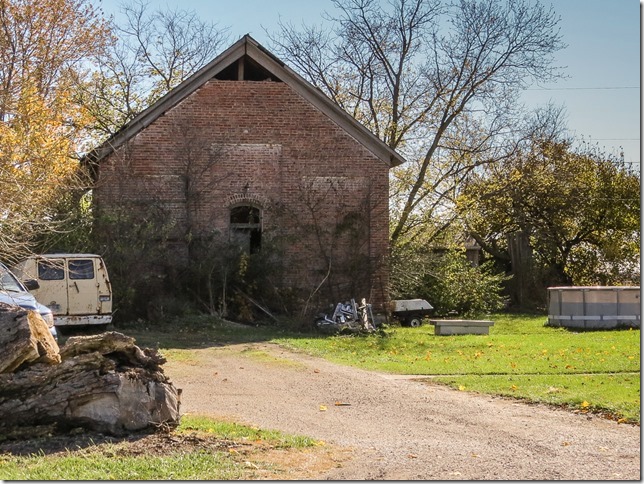 I strongly suspect that this abandoned old brick building was once a local schoolhouse.

In the flat areas of western Ohio, there are two early warning systems that can alert you that you are approaching a town or village.  One is the presence of grain elevators or silos; the other the presence of a water tower.  Here we actually see both on the horizon.  This, in all its glory, is the village of Bloomingburg (population 938, salute!), more or less in the middle of Fayette County.  It will be 200 years old next year.  According to an old history of the county, Bloomingburg was once a hotbed of anti-slavery sentiment.  Such claims, made after the Civil War, are often exaggerations, but this one may have some validity.  Wiliam Dickey, of the Bloomingburg Presbyterian Church, seems to have been an anti-slavery activist and active with the Underground Railroad, while the village had an African-American population (since largely vanished) that would have also been active.

There is a well-kept cemetery in Bloomingberg, shown here on this blustery morning just a couple of days before Veterans’ Day.  This is a rare photograph where I thought a lens flare actually added to the photograph.  Among the veterans buried at the Bloomingburg Cemetery are six Revolutionary War veterans, 19 War of 1812 veterans, and more than a one hundred from the Civil War and Spanish American War.  I don’t know how many from 20th and 21st century wars may rest here. 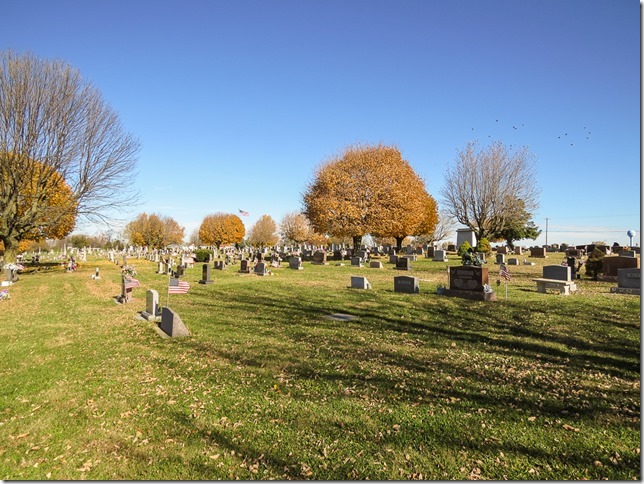 One of the veterans buried here is Henry Casey, a private with the 20th Ohio Volunteer Infantry, who earned a Congressional Medal of Honor for voluntarily serving as a crewmember of a transport that slipped by the fortress of Vicksburg under heavy Confederate fire in April 1863.  This was a key moment in the Vicksburg campaign.

In this photograph, it almost looks as if the dead surround Bloomingburg.   This was actually not originally a photograph ever intended for the public.  Before I had a camera with a GPS function, I would often take photographs of my vehicle’s navigation system or some sort of landmark that identified where I was.  Here I simply snapped a picture of the water tower because it had the village’s name on it.  But later, when I was looking through my photographs, I found that I really liked the way the gravestones were juxtaposed next to an emblem with the word “Bloomingburg” on it, as if the departed of Bloomingburg were hovering around the water tower, perhaps in supplication or to say “no more.” 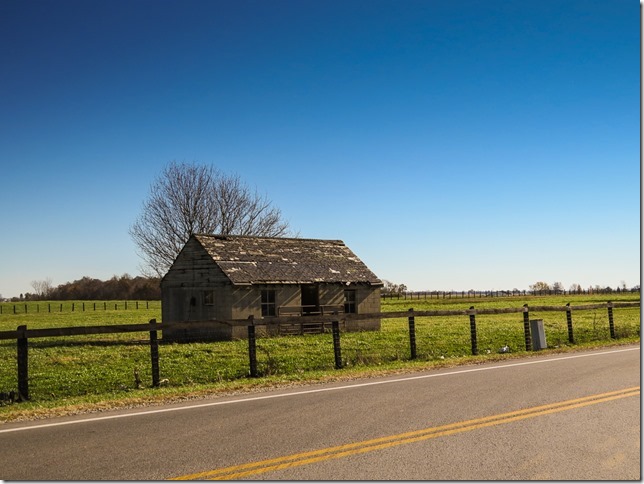 Just a mysterious little outbuilding.  With no visible chimney, it was probably never used for human occupation.

You can’t blame these horses for wanting to lie down for a bit—they look very comfortable. 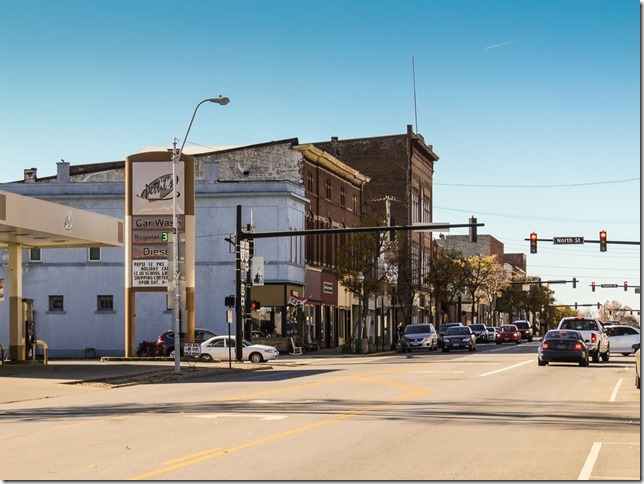 This is a scene from downtown Washington Court House (aka Washington CH), a pleasant town of 14,192 (salute!) that, as its name suggests, serves as the county seat for Fayette County.  Like a number of towns in western Ohio, Washington CH has largely escaped the demographic declines that have plagued so many places in eastern Ohio.

Even towns like Washington CH, which are relatively prosperous, don’t quite know what to do with their old past.  There’s a Wal-Mart in town, naturally, and such businesses have a real effect on the downtowns of older towns and villages.    What do you do with a building like the above building?  It is good that “Court House Fitness” has a home here, but the way we engage in commerce is just different now than it was 100 years ago, when this building might have been constructed, and it is not always possible to repurpose such structures.

Here’s an example.  “Blue Ribbon Rentals” is out of business, and the place next door also doesn’t seem to have a permanent business there (it has been used for bingo on weeknights recently).  The upper floors are completely unused.  A century ago, this was prime real estate; now it can’t even find good use.

The upper windows of one of those shops catch the reflection of an American flag waving across the street.  I thought it made an interesting abstract shot. 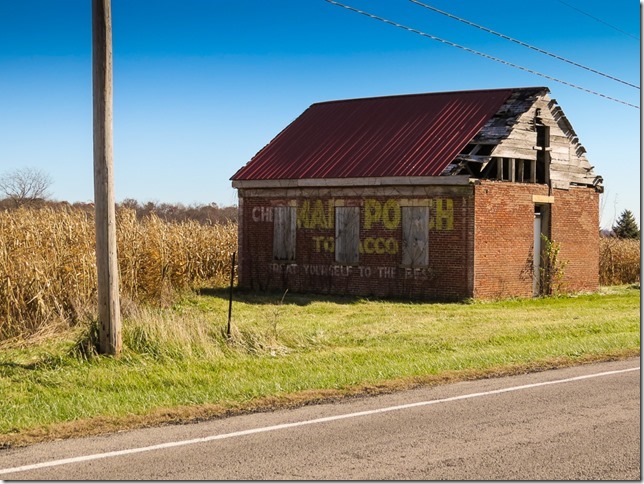 I find the Mail Pouch chewing tobacco advertisement here rather interesting, considering that this building was almost certainly once a one-room schoolhouse.