In which our intrepid hero contemplates nature and navels…

One of the things I love about my driving excursions in Ohio is the feeling of freedom that they give me.  I can drive anywhere, do anything; I have no deadlines or schedules or things I must do.  The only pressure at all in that regard is the pressure to wake up early enough in the morning to catch some good light.  Sometimes it seems to me that this sort of freedom is disappearing in modern society.  I don’t mean this in any sort of Glenn Beck/right-wing/libertarian way at all.  I am not talking about politics but personal freedoms.

Let me illustrate what I mean.  I think far fewer children simply play than when I was a child.  These days, it seems that all too many parents channel their children’s “playtime” into organized activities, like team sports and day camps and so forth.  I have to say that when I was a kid, if you wanted to play, you walked down the block and knocked on the door of some other house and got the kid who lived in that house to come out and play.  We played “cops and robbers,” or “pirates” or “cowboys and Indians,” and we played games like hide and seek, and we played sports, like baseball or basketball.  We rode our bikes all over the neighborhood.   I never once was on an organized soccer team or anything like that.  We didn’t need those things to have fun.  These days, however, it seems like organized activities are all parents think about—this is certainly true for the parents I know.  And those few parents who do seem to allow their children the chance to simply play do so like they were East German border guards.  One set of parents I know would never let their children play outside—on their own block!—unless one of the parents was outside watching them.

I confess that I get very crotchety about this.  My parents would set limits, which varied as I got older, typically making sure I knew when to be back, what geographical limits I had, and so forth.  But then they would simply let us play.  To me that seems to superior to choosing an organized activity for your kids and making them engaged in that supervised, constrained activity.

Where has that freedom gone?  The freedom to simply be a kid?

Well, at least I still have some freedom, in my middle age, even if too many American kids today do not.  You will overcome, kids!  I exercised my freedom on November 3, 2013, to take a drive into the wilds of southeastern Ohio, one of my favorite areas to traverse (I really do love Ohio Appalachia). 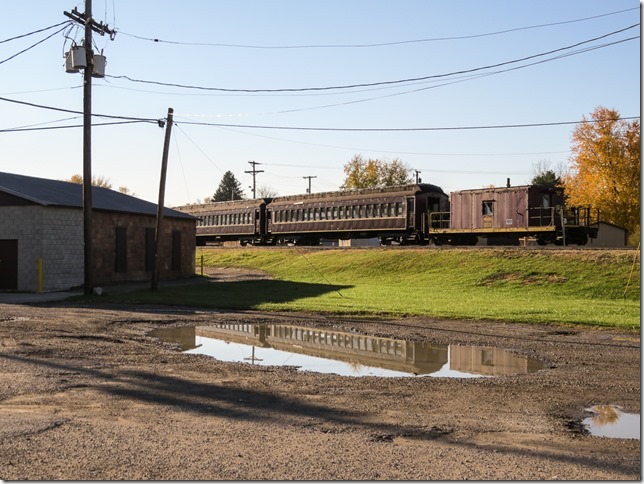 One of the most disappointing things about photography that I discovered when I began to explore the hobby is that for outdoor and landscape photography, the early mornings and the late afternoons/evenings provide the best light.  Consequently, I began to feel pressure to get up earlier to go on these journeys; you have no idea how hard that is on me, as I am very much a night owl.  The idea of waking up early on a Saturday, of all days, produces the emotional equivalent in me of threatening to slice an eyeball.  But the long shadows on this photograph are proof that I dragged myself out of bed that day and got on the road.  I found these old passenger train cars not that far outside of Columbus, but for some reason I did not make a note of exactly where they were. 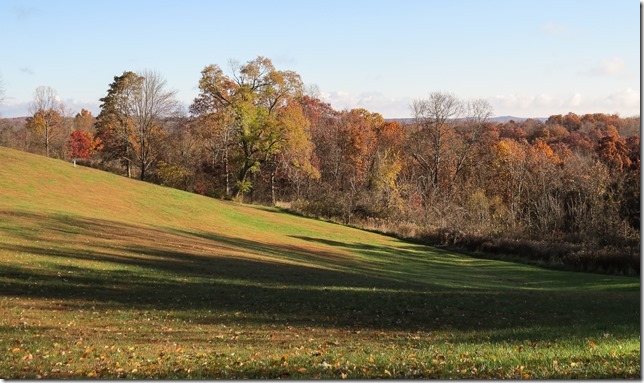 By November, many of not most of the trees had already lost their leaves.  Because of work and other commitments I had missed the best time to catch Ohio’s fall foliage.  Still, you can see enough of it here in this meadow shot to see how beautiful Ohio is in the fall.  Ohio has cold winters, humid summers, and very irritating springs, but its autumns make up for all the rest. 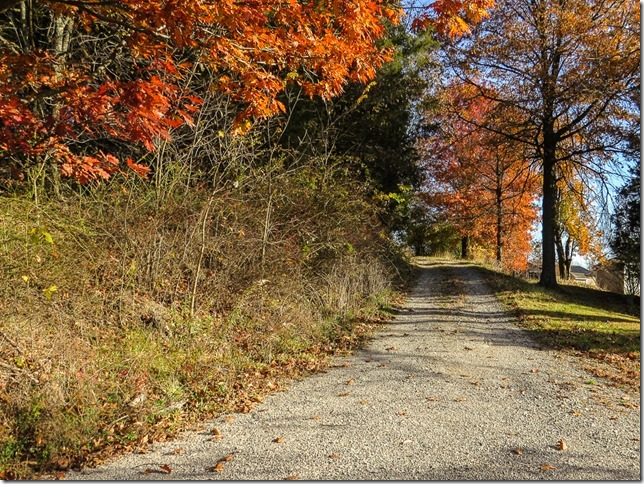 There is nothing quite like going down a lonely back-country road flanked on both sides by the spectacular oranges of autumn.  It feels like a mobile Thanksgiving. 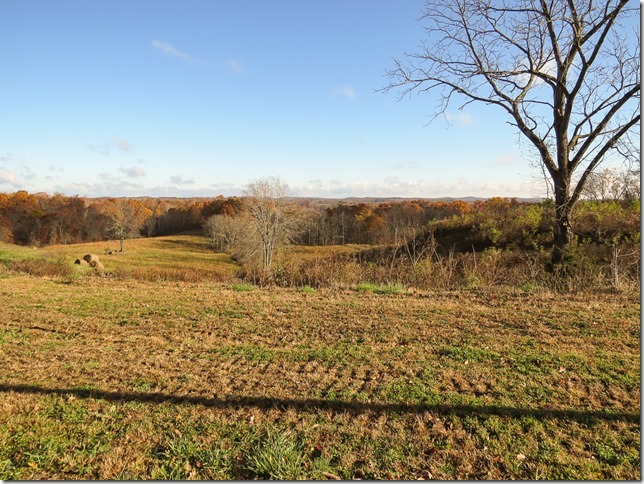 This excursion would produce a higher proportion than usual of countryside photographs, as opposed to urban or small town scenes.  What you see above is something not very often seen in Ohio:  a distant horizon.  Since western Ohio is generally flat and often has tree-lined fields, and because eastern Ohio is typically hilly and woody, you don’t see a lot of far horizons when you drive around the Buckeye state.

Here we are, back to the hills and woods—no distant horizon here, but a nice country scene.

Much of southeastern Ohio is pastureland.  The soil may not be good enough for intensive agriculture, but it can support cattle or other livestock quite well. 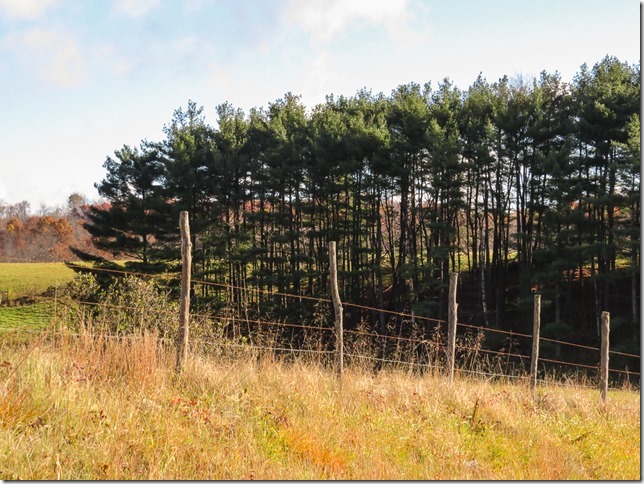 About one third of the state of Ohio today is forested.  Southeastern Ohio has the highest percentage of forested land.  Where I grew up, in West Texas and New Mexico, the forests were all pine forests.  However, 97% of the woods in Ohio consist of deciduous trees, not conifers.  This little stand of trees is coniferous, but I am too ignorant to know which species.  I see it all the time in Ohio, often in smallish stands.

Houses in rural Ohio often seem to have personalities.  I know it is silly, but in my mind I often equate houses built right up on the road as being eager, wanting to know what is going on in the world, open, puppy-like.  Whereas houses set far from the road—or hiding from it—are standoffish, aloof, private.

Senacaville, Ohio, is a tiny hamlet (population 457, salute!), but at one time this sleepy place actually had its own bank, a branch of the Central National Bank.  The bank opened early in the 20th century but has long since been shuttered.  A few years back, whoever owned the property donated it to Senecaville, which wanted to restore it and use it for the village office.  However, they discovered that the building had for years been infested by bats—as many as 5,000 or more bats, according to the pest control people that Senecaville brought out to remove them in 2008.  I did not know it, but it is apparently against the law to kill bats in the state of Ohio, so the pest control folks had to seal off the building except for a few tubes over certain exits, which they used to catch the bats and release elsewhere.    Since no progress seems to have been made on restoring the building, I can only presume that they failed to get the grants they sought to help them do that.

The building doesn’t look very much like any bank, old or new, that I have ever seen before.

One thing you were certain to encounter in eastern Ohio in 2013 was pipeline building, part of the big fracking boom.  All over northeastern and southeastern Ohio the ground is being churned up to install various pipelines heading out in many different directions.  By next year, or the year after that, much of this will not be seen (being underground), but right now this work depicts a state in transition.

Fracking, of course, is very controversial in Ohio.  On the one hand, it is a promising natural resource that could help both the country and this region of Ohio.  On the other hand, there are many genuine concerns about it, ranging from water contamination to earthquakes (both of which Ohio has already experienced).  Personally, I think that a prudent approach, with strict oversight by state and federal agencies, seeking to identify and nip problems in the bud, could probably work and allow fracking to occur.  This is anathema to many Republicans in the state, however, and they control the state government, so I fear that there will be insufficient oversight and we will learn many lessons the hard way (though I will admit that so far Ohio’s state government hasn’t been too bad, so let’s just wait and see).

State Route 147 is southeast of Senecaville and goes by some very nice pastureland. 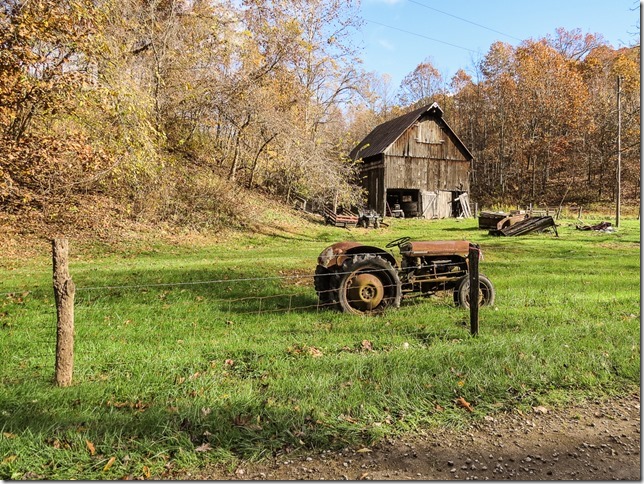 When I saw this scene of an old tractor parked in front of an equally old barn, I couldn’t stop the car fast enough to photograph it.  Part of me wonders if I should have moved so that the tractor was more to the left of the photograph, but I think it still looks fine as is.

I think the composition also looks very nice in black and white.

At the intersection of two very country roads, I found this little corral and livestock building.

One “nice” thing about pastureland is that the cowpies eventually become little grassy bumps, giving pastureland its own unique texture, a more “ragged” look than what we’d see had it been pure grass.

I just couldn’t get rid of the lens flare in this shot, no matter how much I tried.  I thought about excluding this photograph, but I decided that, while it didn’t have much in the way of merits as a photo, the building itself was interesting enough to at least document it here. 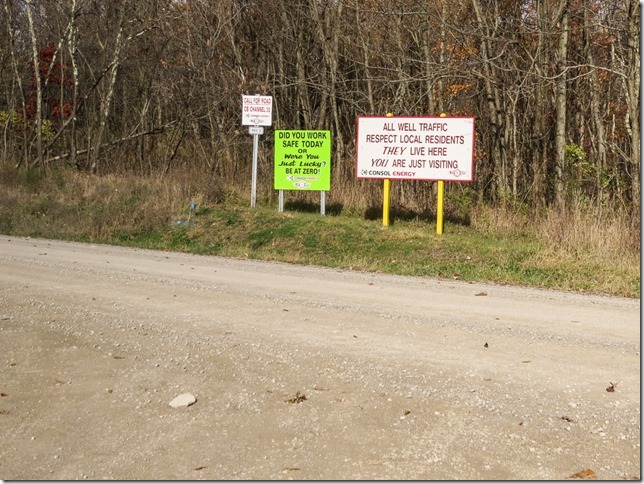 Another sign of fracking is the proliferation of signs erected by oil companies on the back country roads.   Many are simply directions to various sites, while others urge safety awareness or have themes to promote community relations.

A final shot of the southeastern Ohio countryside, taken from a hillside.

One thought on “Excursion 21, Part 1 (Far From the Madding Crowd)”