The city where I grew up, El Paso, Texas, had industry of a sort, but mostly of the resource-processing kind, such as the city’s numerous refineries (oil, copper, etc.).  I think the first time I ever encountered America’s stereotypical industrial economy was the first time I visited Cleveland, Ohio, circa 1989.  I was driving on one of the Interstates in the metro area and there was a certain point where, if I looked south, all I could see, it seemed, was a vista full of smokestacks belching fumes.  That was my welcome to industry.  Of course, by then Cleveland had already been a rust belt city for some time, so I could only image what it might have been like in, say, the 1950s.  Still, even in the 21st century, Cleveland still operates as an industrial city, both in the old sense (polymers, automobiles, etc.) as well as in the newer sense (information technology, biotechnology, etc.).

In contrast, the cities and towns along the Ohio River have been less able to weather the storm.

I had already seen the effects of depopulation and unemployment in some of these Ohio River towns, and now in this second leg of a mid-August excursion, I was back for more.

I wasn’t quite to the Ohio River yet, though, when I saw an unusual site:  an old motel that now sported a sign proclaiming the Oxford Mining Company (with the slogan “Reliability Matters”).  This was a bit of a mystery.  The building still looked very much like a non-functioning old motel.  Meanwhile, the Oxford Mining Company isn’t even the Oxford Mining Company anymore—for about seven years it has been called Oxford Resource Partners.  But a look at their website does seem to suggest that they have several offices and facilities in this vicinity.  It is, in any case, an uncommon fate for one of these old motels.

I reached the Ohio River soon enough after that, in the vicinity of Toronto, Ohio, a town of 5,091 (salute!), though like most towns along the river, its glory days are behind it (its population was 7,780 in 1960).  Toronto sports an actual working industrial plant, belonging to the Titanium Metals Corporation (known as TIMET), which the town depends on for much of its remaining economy.

This is the rear-view of a row of houses on (I believe) Madison Avenue in Toronto. 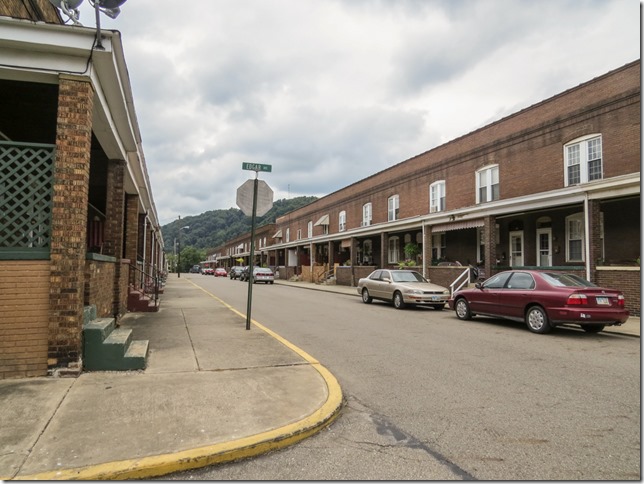 From the front, the houses give a totally different impression, with a long row of connected identical townhouses that look like they might have been company housing at some point.

Toronto does have some restored buildings, such as this 1890 building that was refurbished (note the re-done brickwork on the upper left) and now houses some businesses, at least on the ground floor, and judging from the air conditioners, perhaps some offices or apartments on upper floors. 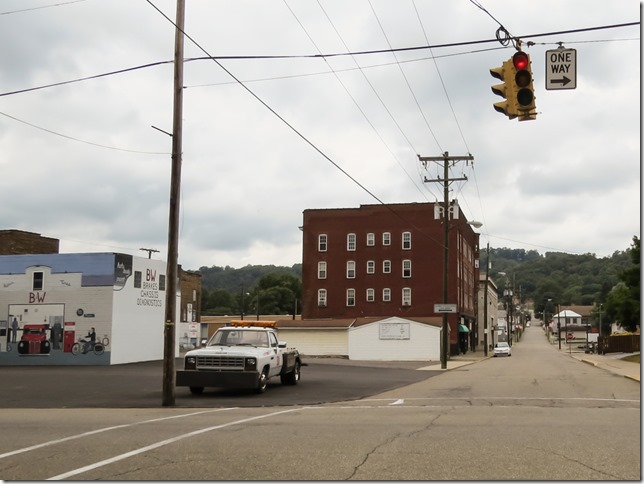 Here’s a look at a typical Toronto intersection.  Note the hills in the background; a feature that every Ohio River town has.  Also look at the commercial mural on the B+W Tires place.  Is that the Fonz? 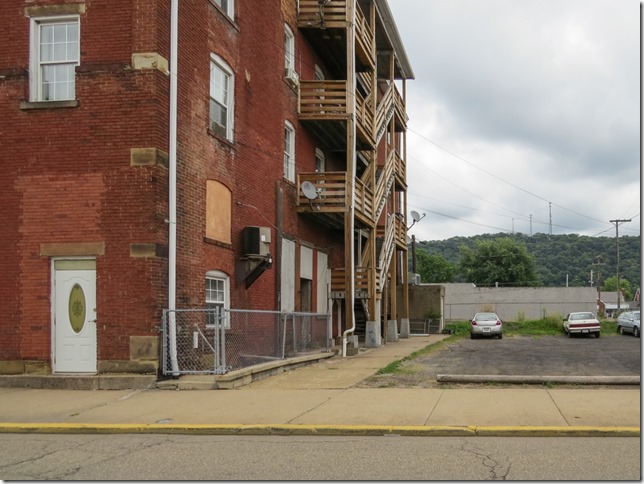 Here’s another attempt at refurbishing an ancient building, apparently converting it to apartments.  I would not like to have to go up all those flights of stairs, but then stairs are the natural enemy of the fat man.

A lot of Toronto still looks like this, though.  This corner office building once must have thrived.  Now, it houses a single, rather unappealing business, and the upper floors appear completely uninhabited.  This the desolate aspect of the Ohio River rust belt communities.

Some of the residences are also relics of a time gone by.  Toronto must have been quite a prosperous town when this amazing house was built.

The next place up the river is the unincorporated hamlet of Empire, Ohio, with a population of around 299 (salute!).  Most people probably work at the power plant.  Here’s its rather decrepit town hall.

Up the road from Empire, and just outside of East Liverpool, is the village of Wellsville, Ohio (population 3,541, salute!).  Wellsville is a tiny little strip along a bend in the Ohio River.  Even by the standards of Ohio River Rust Belt towns, Wellsville appears down on its luck.  It reached its peak population (8,849) almost a century ago and it has been declining every since.  Like many towns in eastern Ohio, it got its start with pottery and ceramics.  Later, steel and manufacturing came in—but that has long since left, along with most of the town’s prosperity.  Around 20% of the town’s homes are simply vacant—the town has issued only one permit to build a new home in the past four years.

A few years back, Wellsville learned that a Washington-based company planned to build a $6 billion coal to gas conversion plant in Wellsville, which would have employed 500 regular workers once built.  This would have been a tremendous shot in the arm for Wellsvillians, but would have come with a significant environmental cost.  In the end, the company could not get the needed financing, so the project never went through.

The photograph above symbolizes Wellsville’s fate.  It’s a shot of the Home Banking Company Building, constructed in 1905, when Wellsville was a much larger, up-and-coming town.  But the Home Banking Company blew away with the years and others took it over.  At one point it was used as a post office, then some local attorneys bought it to renovate and rent out office space.  Now the building, in decrepit shape, houses only a tiny flooring business (though there is a sign for a bar, The Twisted Stone, that bar is already out of business). 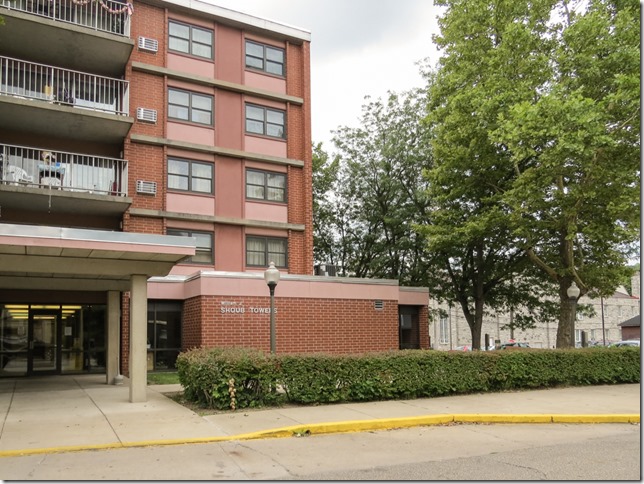 This is Shoub Towers, an old-style public housing unit in Wellsville, populated mostly by elderly and/or disabled people.  One thing that has surprised me on my trips up and down this stretch of the Ohio River is how common such old “projects” are in this region.  They are easy to recognize from their distinctive architecture—units in every town have a sameness to them.  Just to provide some contrast, the city of Columbus has many public housing communities, but none of them are of this archaic style (those have all been demolished and replaced).  Not so in Appalachia.

This old building gives me an opportunity to exercise my new-found love for fire escapes. 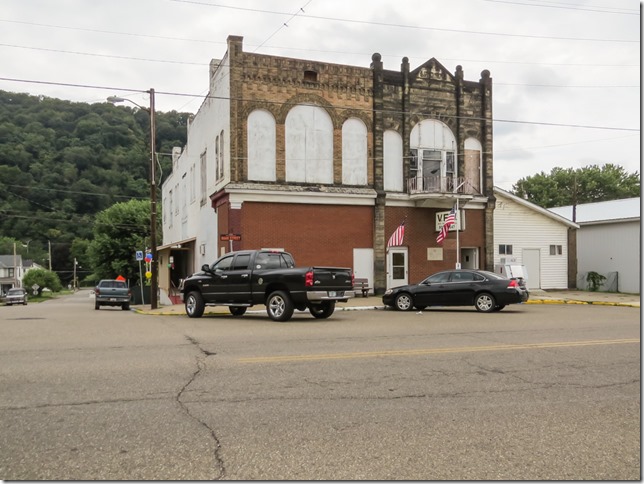 This VFW hall has a rather desolate appearance to it.

Here is a black and white shot of a typical downtown Wellsville street.

The old and the new.  The old is this original bottleneck kiln, a symbol of the importance of ceramics to Wellsville’s earlier history.  It is all that remains of the Acme Craft Pottery company (a building once surrounded the kiln), which dates back to the 1920s, thought the kiln itself is probably older than that.  The kiln is just off the highway that traces the Ohio River, which is why the building is no longer in existence.  And the new?  That sign on the right, offering to buy “mineral rights,” which is part of the fracking boom in Ohio. 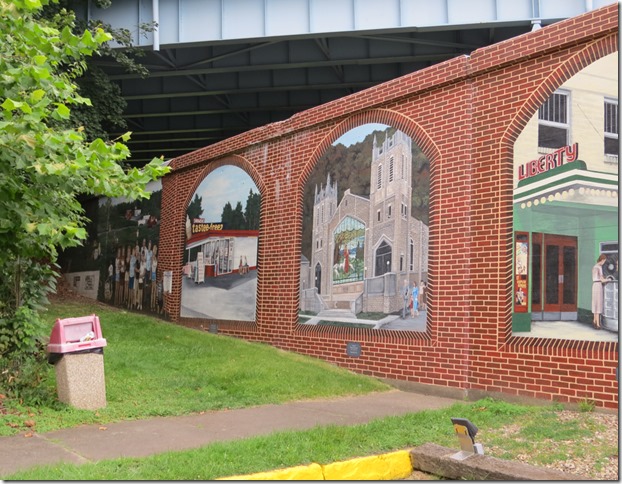 Not far away, underneath the highway, are the Wellsville Flood Wall Murals, painted by Gina Hampson in 2005, which show scenes from Wellsville’s happier past.

Here’s the kiln, as well as “Indian Head Rock,” which apparently entirely escaped my notice.

It is clear that the citizens of Wellsville love their town and its history.  I only wish that history had been kinder to it and them.