In which our intrepid hero cows some cows…

As I sit here typing on my computer, the weather outside is 11 degrees (Fahrenheit, of course; I do not belong to Al Qaeda).  The next few days are going to get much colder.  The winter of 2013-2014 so far has been a pretty darn cold one for Ohio.  That arctic quality is only enhanced when I look at the photographs in this blog entry, which were taken last July 13 on a gloriously sunny summer’s day.  As an obese person, I tend to prefer extremes of cold over extremes of heat (you can always put on another layer, but you can only get so naked), but I am not much for extremes of any sort.  Although I can put up with cold weather, I really am a weather wimp.  I would be much happier if the temperature always stayed between 69 and 72 degrees.

Alas.  At least I can console myself with these memories of warmer days.  On this fairly lengthy excursion I essentially picked up from where I left off last time, driving northeast through Ohio’s hilly pasturelands and forests, all the way to the Pennsylvania border.

I love driving through what you might call “inhabited forested areas,” because one minute you are in the woods and the next minute some building or homestead is peeking out at you.  Here we see an old barn and another farm building squeezed between the roadway and the woods.

You see farms in this area of Ohio, but the farming is not as good as it is in western Ohio, so livestock becomes more common (and often what is grown is hay for livestock).  Throughout the countryside, smallish farms are nestled in the woods. 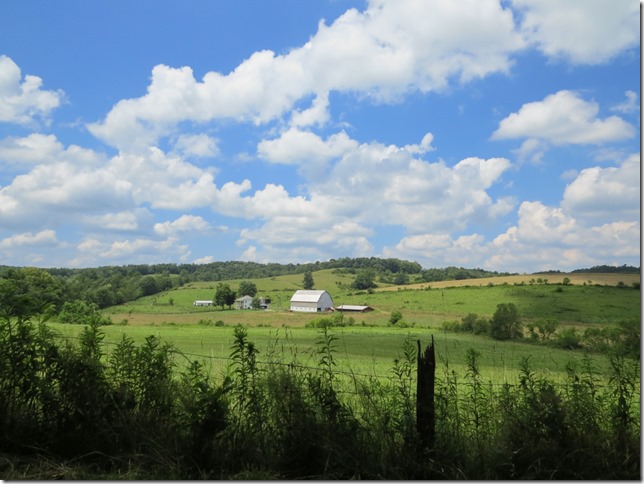 This day was beautiful for driving, which was a relative rarity for me in 2013.  At times it seemed that every single weekend in 2013 was completely overcast.  Not so on this day, although I did have to content with a brisk wind (which is not good for photography as it raises the specter of camera shake).  Eastern Ohio is really the best area of Ohio to get landscape shots, because the rolling or hilly terrain is more interesting and also because those same elevation changes can offer good vantage points from which to take photographs of the countrysdie—as in this idyllic shot of a farmstead (including a farmhouse with “Gone with the Wind” style columns). 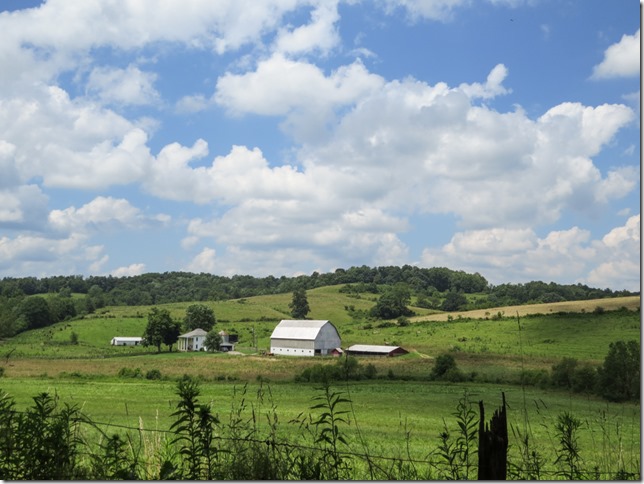 In this closer shot, you can see the details of the farm a bit more clearly.

Individual houses as well as farms are also hidden in these woods.  I was driving generally in the direction of Coshocton (as it seems I always am), when I came across an orange house with orange flowers and orange birdhouses being tended to by an orange lady.  I thought that rather charming and asked if I could take her picture for my blog.  She was  bit nervous and wanted her husband to be in the picture, so she went and got him.  I chatted with the nice couple for a while.  You’ll notice I am not mentioning them by name.  They gave me their first names, but I did not write them down, not thinking at the time that I would have accumulated six months’ worth of delay in processing and writing about these photographs!  Alas, my memory failed me in the interim, as it so often does.  But I enjoyed talking with them.

Once they learned why I was out on the roads, they told me about an old cabin down the ways apiece, which I subsequently found and photographed (above).  Supposedly, this early 1800s cabin once housed a schoolteacher who eventually died of poisoning because of some sort of contaminant with his well water.  Is this true?  I have absolutely no idea.  But it ought to be true, dammit.

Hay, hay, hay is both a greeting from the 70s sitcom “What’s Happening?”  and what one sees in fields throughout eastern Ohio.

The above photograph is a shot of a bunch of cows’ asses.  So I was driving by a pasture with a bunch of cattle nestled in one corner, next to the road, as they frequently do.  Cows tend to be placid (you may have heard) and are generally entirely unconcerned (though sometimes curious) about vehicles.  However, when I stopped my Pilot to take a close up photograph of some of these cattle, something about me spooked them and they all took off running to the far side of the pasture.  So my planned shot ended up being nothing worth using.  Still, at least I can tell this anecdote.  I must have a face ugly enough to scare cows.

One of my favorite shots from this excursion is this photograph of a distant tree farm in the rolling terrain.  Many tree farms are actually quite ugly, but this one is immaculately kept.  The passing clouds kindly left the trees illuminated for me. 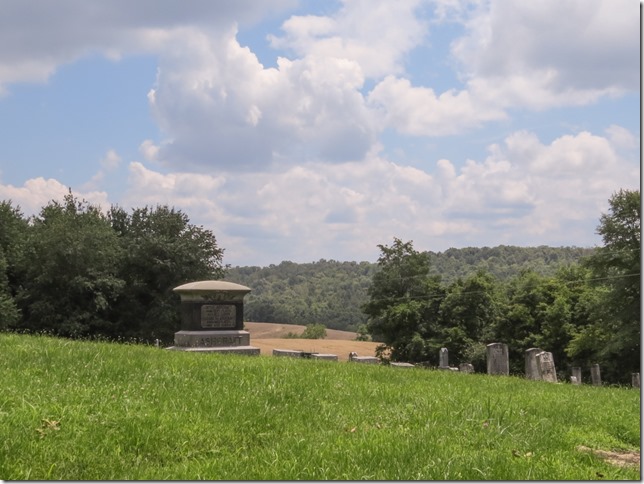 Small cemeteries dot the hillsides of eastern Ohio.  Here is one such resting place, the Broomstick Cemetery, featuring Jesse Ashcraft (1825-1908) and his wife Elizabeth (1835-1924).  They had twelve children. 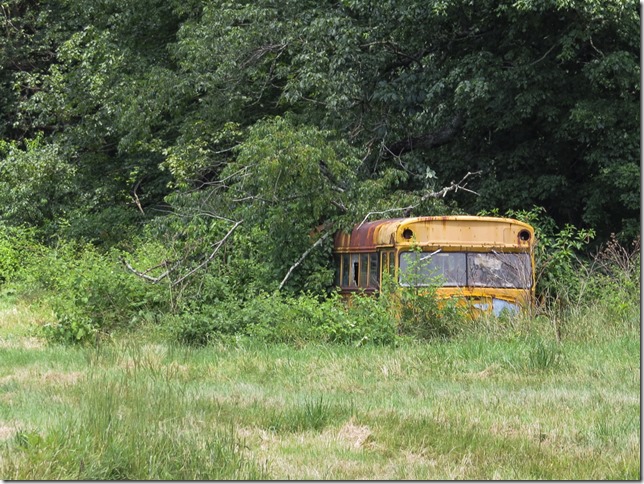 The woods are the final resting places of other things, too, especially vehicles.  Much of rural eastern and southern Ohio is one vast Elephant Graveyard, where dying vehicles of every type seem to crawl.  I have seen almost every type of imaginable vehicle abandoned somewhere in Ohio.  Schoolbuses are actually one of the more common types of abandoned vehicles.  Considering these are the property of schools, I have always wondered how it is that they so often end up abandoned on private property.  Did the schools sell them to people, who later junked them?  Or did people just junk them on their own?

I eventually arrived in Coshocton, which seems to be my home away from home—from Columbus, Coshocton is essentially the gateway to northeastern Ohio.  Here’s a shot of a corner building in downtown Coshocton, now rather lonely since its companion was apparently torn down, leaving a gap like a missing tooth.   The little structure on top of the building bears the names of its builders:  Rager and Tumblin.  A little research reveals that these names refer to William H. Tumblin and Samuel Rager, who originally built a saloon on this site in the 1890s, as this interesting photograph illustrates.  In the early 1900s, they built the above building on the same site.  At different times it apparently served as a drugstore and a saloon.  Now it houses a florist. 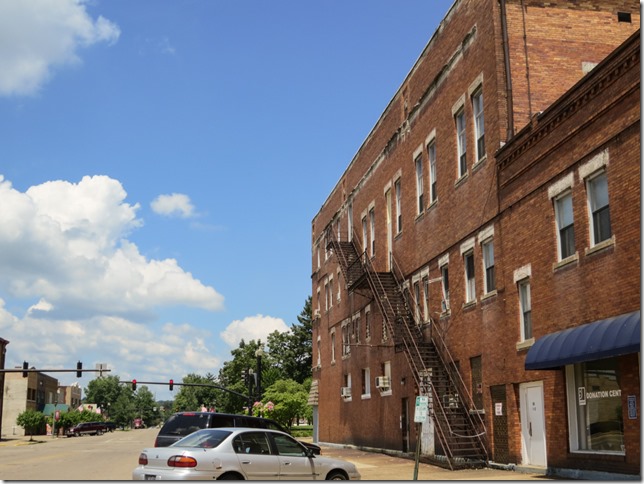 One of the great things about old brick buildings are their old-fashioned fire escapes.  I never really became aware of fire escapes as distinct and interesting features until I started driving around Ohio.  Now I just love them—go figure.

Soon enough I was out of town and back in the countryside.  Here’s another old barn, a small livestock barn, still standing amidst the trees.  The little blue bucket next to the window is an interesting touch.  I am not sure what its original purpose was, but now it seems to serve as a small weed planter. 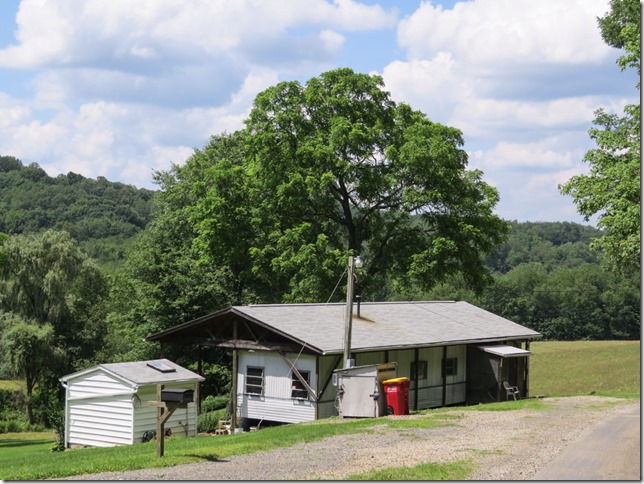 Here’s another example of something I have illustrated in some previous excursions—these odd structures designed to make travel trailers or (more rarely) mobile homes something more permanent. 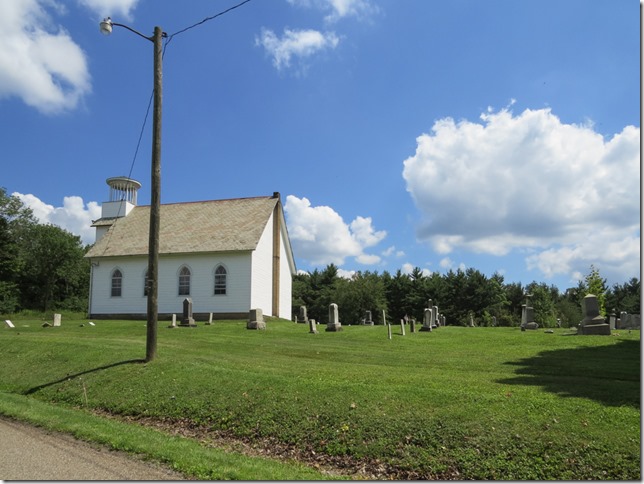 We’ll wind this part of the excursion up with a shot of a cemetery behind an attractive small church.  Because of the beautiful day, this is just about as nice as a cemetery can look.  As resting places go, this one ain’t bad.