Excursion 13 (Checking Out Without Checking In)

In various previous excursions, I traveled along most of Ohio’s stretch of US-40, once one of America’s most important highways but now a forgotten backwater.  The most interesting thing about US-40 are its many old motor hotels or motels, constructed mostly from the 1930s through the 1950s before the Interstate Highway system doomed them to oblivion.  Now some have been razed, others are in ruins, still others have been repurposed to some other effect (typically as low income apartments), and a few manage somehow to hang on.

The only stretch of US-40 remaining to me was that stretch from Columbus to Springfield.  So the primary purpose of this excursion, taken on June 22, 2013, was to explore this stretch, primarily to look for old motels.  As it turns out, this was one of the richest areas in Ohio for such motels; it had so many that I did not bother to document them all here (as there were some I just could not find a way to make interesting or remarkable at all).  So this blog entry is a very motel-centric entry.  Moreover, because many of these old motels have a long, flat shape that do not make them very interesting for photography, this is much more of a “documentary” blog entry than one with any artistic or aesthetic pretensions.  Despite this, there are some interesting photos here.

I began my excursion along US-40 still on the west side of Columbus, starting with the New Rome Motel, which still operates as a motel and, as the sign suggests, does make an attempt to keep up with the times, even offering Wi-Fi.  I often find it interesting to read on-line reviews of these old motels that still are motels.  Google offered two reviews, both quite concise:  1) “a nice place;” and 2) “it is fucked up.”  Trip Advisor had a more wordy and entertaining review, which I reproduce in part here:  “We lived, but when you can’t shake the yuck after you leave, hindsight suggest [you] should have left & lost $75…Property gave the vibe you will die here, or most of our patrons pay by hour & aren’t here long enough for us to harvest their organs…The service was very friendly & care about your well-being as noted by the stack of available condoms behind the bullet glass at front desk.”  This patron discovered a common fact about many of these old motels that remain in urban environment:  they are typically used for prostitution and drug deals.

You may notice the building doesn’t seem that old and it is not—county records seem to suggest it was only built in 1967, very much on the tail end of these US-40 motels.

A ways down the road, in the unincorporated suburb of Galloway, Ohio, is a non-functioning former motel.  Currently called “B&B Lodge,” it has been converted into low-rent tiny apartments.   The Lodge was built on the less-common cabin model and has around 16 or so tiny cabins that it rents out to transients, temporary workers, etc.  I tried to find out when it was originally built but was not successful. 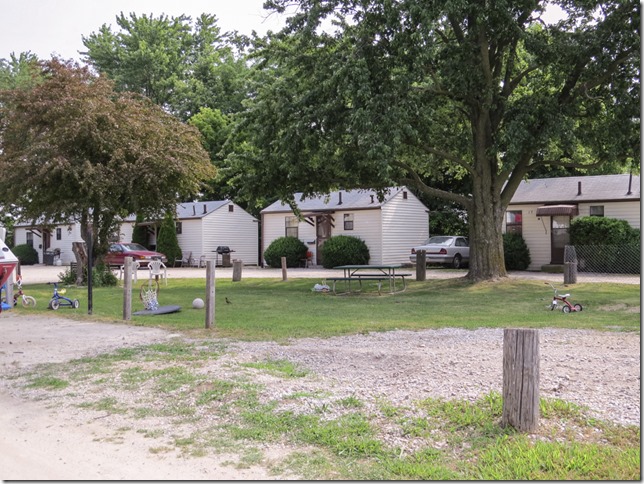 If you are going to have to live in a motel-converted-to-apartments, the cabin model is the way to go, I guess, because at least you are not sharing a wall with anyone else.  the above photo, showing the little lawn area with its toys, is a bit disturbing—this is not the sort of place one would want to raise a child.  Moreover, at the moment of this writing, this Lodge is hosting two registered sex offenders. 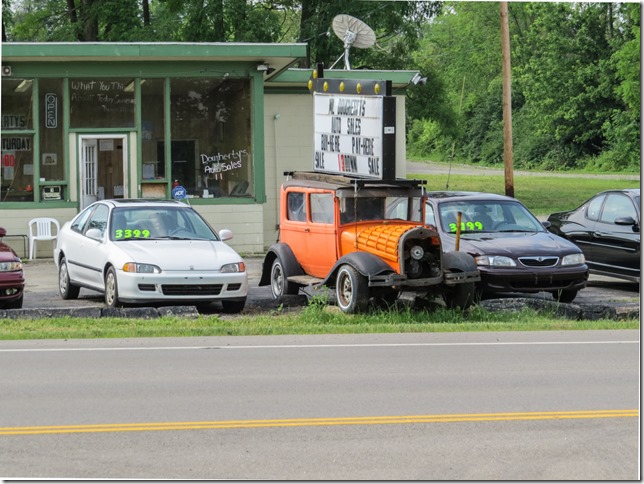 I snapped a shot of this old car being used as a sign post for a used car dealership between Columbus and West Jefferson, but I suspect that the way I feel when I see an old car being used this way is similar to the feeling an animal rights activist must feel about circus animals.  This is a car that deserves to be fixed up and treated well.

This old motel, in the village of West Jefferson (population 4,222, salute!), has also been converted into apartments.  I was unable to find out what motel it used to be.

Meanwhile, away from old motels and sex offenders, the countryside was in full-bloom and the corn was rapidly growing, as this shot of a massive old barn reveals.

Of course, at least the Royal Motel still has some use.  The same can’t be said for this ruined commercial building, in such bad shape that its original purpose cannot even be divined.  A couple of old junked cars complete the setting.

Here is a close-up of the building itself, in color.

Similarly, this old motel (not too far from the intersection of US-42 and US-42) is also in ruin, not even suitable for low-rent apartments or drug/prostitute liaisons.  Once upon a time, this was a very nice looking motel, large for such items (with 32 units) and attractive.   As recently as the mid-1990s, this motel was still in operation.  A book published at that time wrote that “the owner recently reshingled the roof and maintains the grounds immaculately.”  He also erected a sign along I-70 advertising the motel, hoping (apparently in vain) to get some guests that way.  At one point, the intersection of US-40 and US-42 must have been prime real estate.  No more. 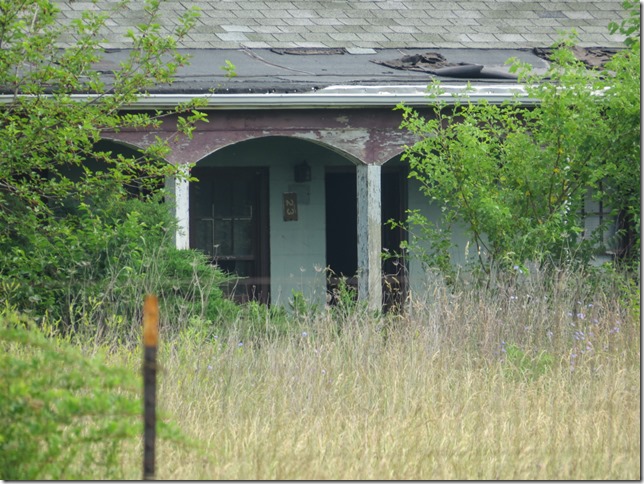 The R and R Motel, in better days, was called Fettrow Village and used the slogan “Host to a Motoring Nation.”  I have included a postcard below (there are also color versions of this postcard around).  In the 1960s, an advertisement for the motel boasted “pleasant rooms have telephone, TV, air-conditioning and shower or combination baths; heat in 23 rooms is thermostat controlled.”  Property records suggest Fettrow Village was built in 1951, in those flush post-war years in which automobile ownership boomed.  However, some postcards say that it was built in 1933—this might mean that it was rebuilt in the 1950s.

The last owner of the R and R Motel was R. K. Patel.  This is not surprising—a number of the motels I have featured in this blog are or were owned by someone named Patel.  More than half of all U.S. motels (and almost 40% of all motels/hotels) are owned by people of Indian descent, and some 70% of these have the last name of Patel, suggesting their family origins are from Gujarat.

Slightly down the road is London, a town of 9,904 (salute!) and county seat of Madison County.  It has experienced rapid growth in recent decades (over 12% a decade for the past 30 years), but has a history dating back to the early 1800s.  It is an attractive town that still has a number of old buildings.  Above is the Red Brick Tavern, also known (for clearly obvious reasons) as the Red Brick of Yesteryear.  The Tavern, according to its website, was “Ohio’s second oldest stagecoach stop.”  It was originally built in 1836 as an in with 24 rooms.  Not surprisingly, it has gone through many owners in that time period.  Property records have the building as built in the 1920s, but the building looks older than that.  I suspect this may refer only to more recent additions to the property. 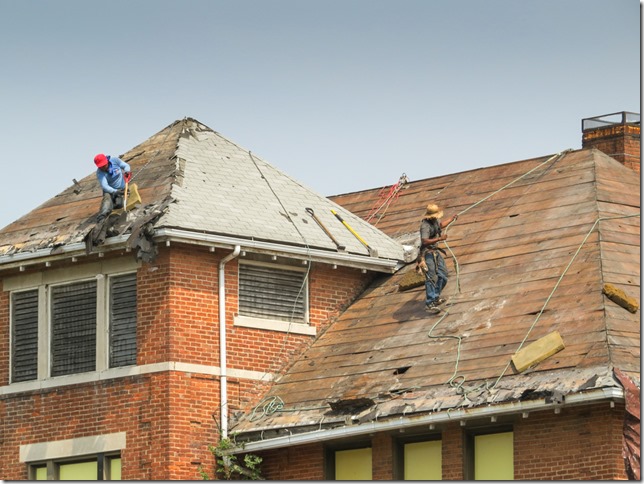 Next door, workers were remodeling an even larger old building.  I could never do what those men are doing—my fear of falling would never let me get up there.  That fear kicks in even when I am on a relatively shallow-sloped one story roof.  These guys are three stories up on a steep incline. 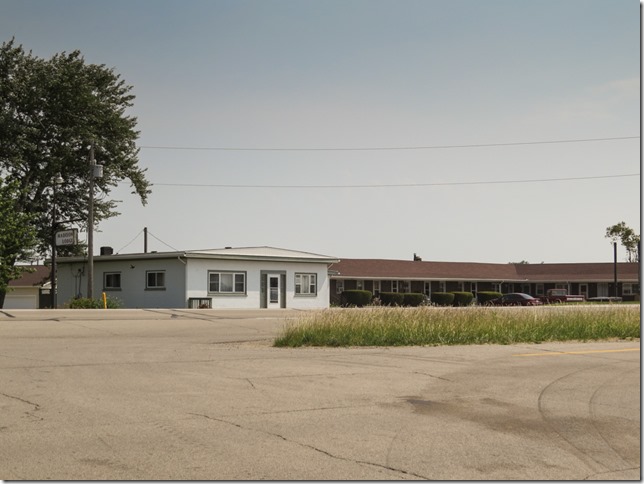 Here is the rather non-descript Madison Lodge, still near London, Ohio, built in 1954.  Apartments now, of course.

A bit more interesting is Markley Hill Lodging, along U.S. 40 near South Vienna (population 384, salute!).   Built in 1951, I think it is actually still officially in operation as a motel, although I think it is being used as de facto apartments.  There’s one registered sex offender staying there. 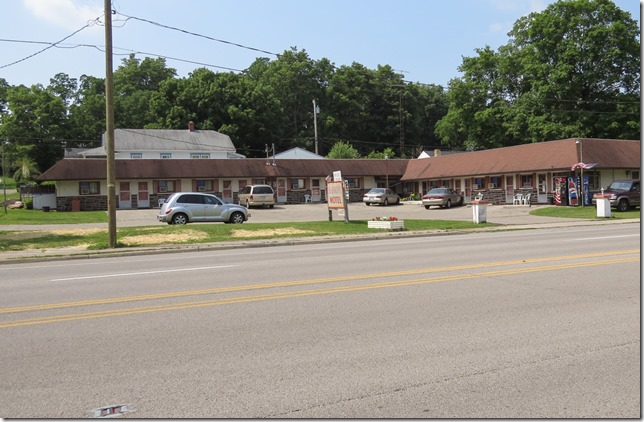 As I approached Springfield, I came across even more motels, including this tiny 12-room inn, the Harmony Motel.  It seems to have been built in 1951, based on property records.  It is an active motel and has even had some decent on-line reviews.  It has undergone some changes since it was built, as the below postcard suggests. 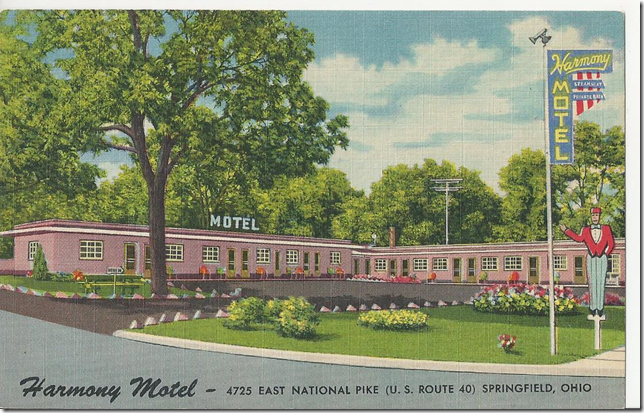 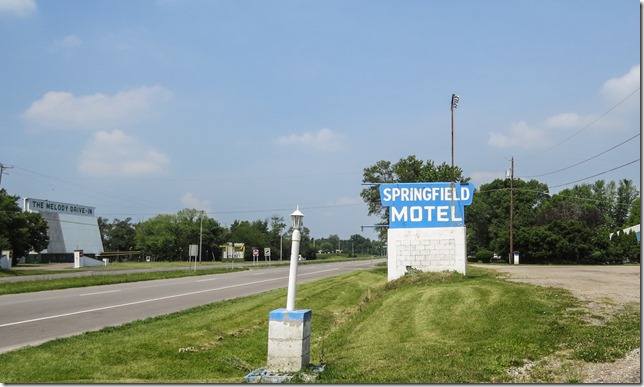 The same people who own the Harmony Motel own the nearby Springfield Motel, built in 1950.  With the Melody Drive-In just across the street, it really seems like the 1950s.  However, the movies playing that day were Monsters U. and World War Z—not too fifties-ish! 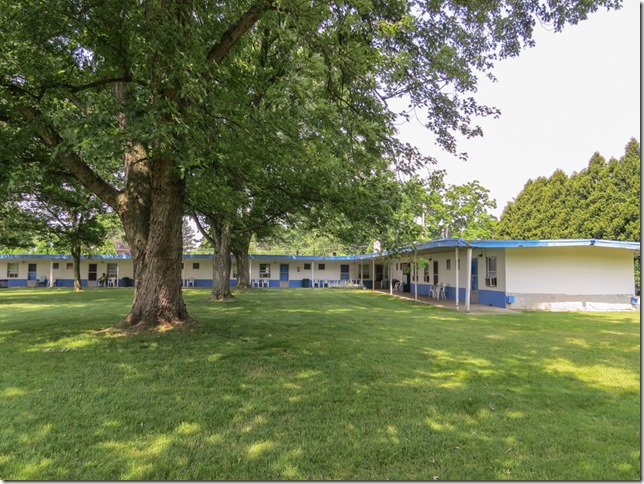 The Springfield Motel is not exactly the Ritz.  However, the peaceful yard in front of the L-shaped motel, with its large shade trees, compensates a little.

Very nearby is a little motel, built in 1940, converted to the Country Vu Apartments.  I don’t know what it used to be, alas.  At one point this was a very cozy little motel.

A block or two down the road is The Drake Motel, built in 1952 (and currently owned by a Patel).   As a motel, it gets horrific reviews and much of its clientele is probably low income living there by the month.  The motel itself is non-descript and uninteresting, but I liked the sign.

Another of the many motels of this ilk in this part of Springfield is the Town House Motor Lodge, built in 1956.  It has that distinctive “wavy roof” architecture of many buildings of this era.  For the record, I also took pictures of the nearby Fairfax Inn, but they didn’t seem worth posting.

With those motels, I pretty much closed my US-40 loop, having covered the highway across the whole state.  So I decided to head south from Springfield to look at the countryside for a while.  However, I was not feeling well and after a relatively short period of time aborted my trip and headed home.  Not, of course, before snapping the above rustic shot.  I also came across a farm with a baby llama, but unfortunately for some reason my pictures did not come out well.

I did drive through the tiny hamlet of Clifton, Ohio (population 152, salute!).   As proof, here is a building from it.

More surprising was this geodesic farm house.  Geodesic homes are extremely rare.  Many of the ones that exist in the U.S. were built during a brief fad phase in the late 1960s and early 1970s.  There still are some builders out there who can build them, though. 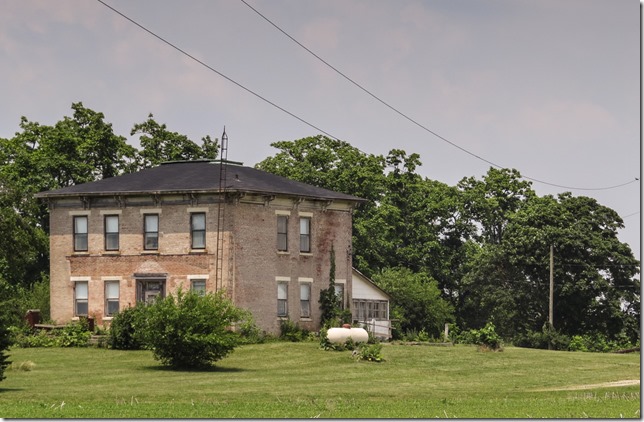 Lastly, here is a much, much older and much more traditional home, but which is a bit unusual in its own right because of its cube, rather than rectangular, shape.

6 thoughts on “Excursion 13 (Checking Out Without Checking In)”