Excursion 45, Part 1 (Where the Buffalo Laze)

I am not a very adventurous type; adrenaline-soaked thrills are not the sort that typically appeal to me. But I do understand the lure of exploring, of seeing something you’ve never seen before—or perhaps even something that few or no other people have seen before. Exploring combines the intellectual interest of discovery with the experience of being there. So when I go on one of my little excursions into the nooks and crannies of the Buckeye state, I always hope to see things I’ve never seen before. On this vernal equinoxian expedition, taken on March 21, 2015, I certainly did see some new things.

On this longish-trip, I started off to the southwest, into the farmlands of central Ohio, then after about 30 miles changed direction and headed southeast, into the wilds of Ohio Appalachia.

I could tell Spring was indeed springing, as this was a typical very windy early spring day. Wind is not usually the photographer’s friend, and certainly not the friend of the amateur photographer like me.  But the wind did help me capture this image of the tattered remnants of a Confederate flag still flapping in the stiff breezes.  Confederate flags are, sadly, all too common in rural Ohio, especially southern Ohio.

I noticed a very large barn on a farm about 20 miles or sosouthwest of Columbus and nestled under dark shade of the barn’s awning was this old truck. I call these trucks “teeth trucks” because the style of front grill from trucks of this era make them look like angry faces (there are some great examples of “teeth trucks” in the extremely good all-but-forgotten film Sorcerer, 1977, one of my favorite films).  I seem to recall I had to use some HDR processing to make the truck more visible in the dark shade. I would love to have a truck like this, though what I would do with it is another thing entirely.

The grill actually helped me identify this truck. I image-searched truck grills and eventually hit paydirt.  I believe it is a 1951 Ford F4 1-Ton Flatbed.  I am so awesome.

Shortly after I changed direction and started heading southwest, cutting back across I-71, I drove past this interesting building, which surely at one point, long ago, was some sort of little store. The satellite dish attached to the porch suggests this quite ramshackle structure was still inhabited at least fairly recently. The Dish Network only began in 1996. 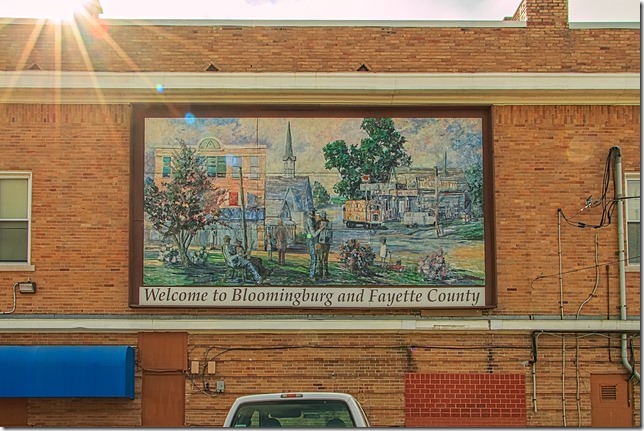 I passed through Bloomingburg quite quickly, but stopped to take a memento in the form of this welcoming sign. Bloomingburg is a tiny (population 938, salute!) village in Fayette County. Based on the activities of the subjects of the painting, they must have been big newspaper readers in bucolic Bloomingburg. 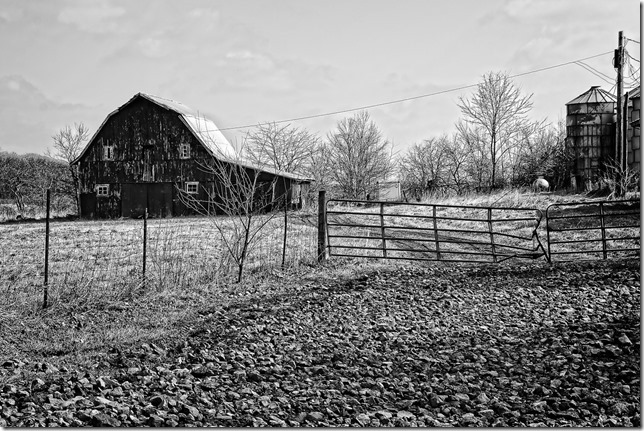 South central Ohio is still all about the farmland. As you go further south or further east, you’ll start running into hills and there tends to be more grazing and pasture land.

On this trip, I saw several pretty well-kept-up old one-room schoolhouses, dating from the late 19th and early 20th centuries.  At one point, these were ubiquitous across Ohio.  The wooden ones are mostly gone, but the brick schools have remained, in conditions ranging from ruins to pristine. This one is located next to the Maple Grove United Methodist Church.  This was the Maple Grove school and may have dated back to 1894.  The exterior, at least, is in surprisingly good condition. 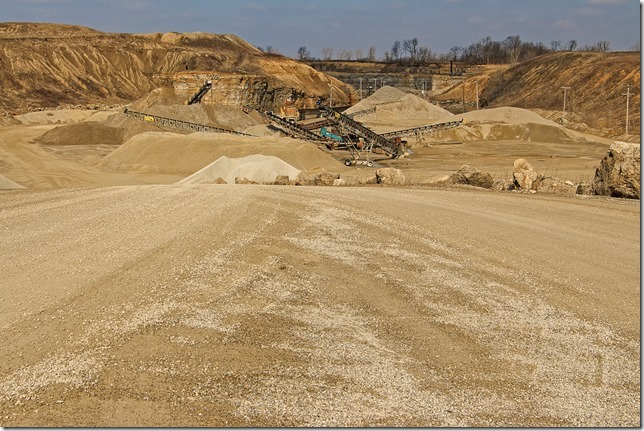 Not all that far away, I came across a sand and gravel company. These sorts of quarries are common in Ohio—and everywhere—and they are interesting to me because of how they transform the landscape.  When I was a child, I once visited the Santa Rita/Chino open pit copper mine in New Mexico (at the time, the largest in the world). These quarries are like little toy versions of that behemoth gash in the earth.

It was a Saturday and no one was working, but oddly, there were no gates shutting off the area, so I drove around for a few minutes inside to see if I could glimpse some of the quarry that I could not see from the road and was rewarded with a few interesting shots.

This is the Melvin Stone Company, which has been in operation since 1919, nearly a century, created to provide material for the first highway to connect Cincinnati, Columbus and Cleveland.  Of course, it’s since been acquired by some much larger conglomerate. 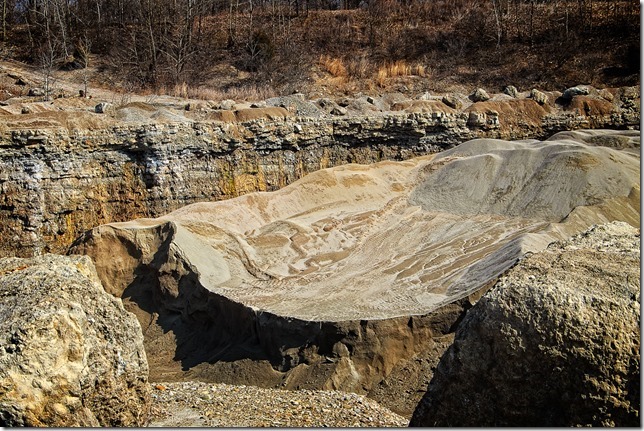 Within the pits of the quarry is this huge scooped mound of sand and earth. If you ignore the trees at the top of the photograph, you could almost imagine this to be a scene on Mars. 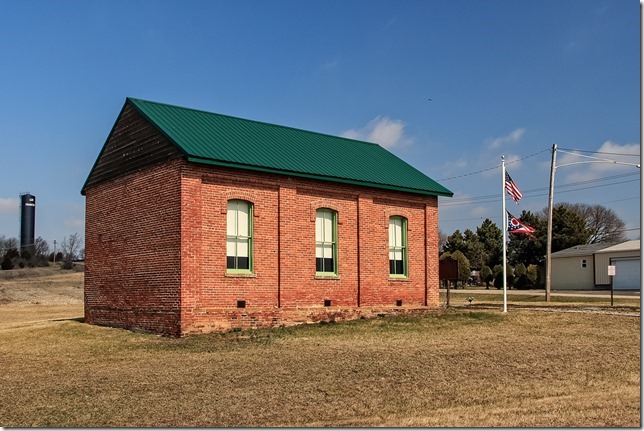 Just outside the village of Frankfort, Ohio is another one-room schoolhouse, this one quite deliberately well kept-up. The schoolhouse, known as the Sanford School and built in 1877, is located across the street from the large $24 million K-12 school for the Adena School District, built in 2001.  The contrast is, well, remarkable.  I believe it is maintained by the Frankfort Historical Society.

Frankfort itself is a tiny village (population 1,064, salute!) west of Chillicothe in southern Ohio.  Unlike many towns and villages in Ohio, it has not seen consistent population loss in recent decades, though it has plateaued at around its present population for nearly 50 years.  It has little to boast of except for the annual “International Sunflower Festival,” which is a mystery to me, as in all my thousands of miles of driving around Ohio, I have seen extremely few sunflowers being grown—and those generally in small gardens. Even this crude mural of Frankfort doesn’t show any sunflowers.

With this landscape photo, we can tell we are on the edges of Appalachian Ohio as the flat terrain quickly starts to sprout hills and woods. 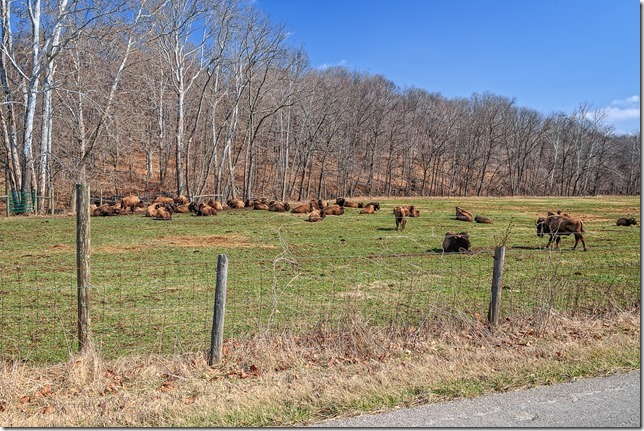 Almost due west of Chillicothe, the original capital of Ohio and its southern gateway to Appalachia, I actually came across a small herd of domesticated buffalo while driving an Owl Creek Rd.  This was an unexpected little surprise for me, as I do not ever recall seeing any bison in Ohio before (growing up, I had seem them out west, of course).  Bison were common in Ohio centuries ago, though not as common as on the Great Plains.  Herds typically numbered a few hundred at most. Native Americans in the region hunted them, but not to a great extent. By the early 1800s, wild bison were basically extinct in Ohio, being either killed or forced west.

A little research on my part revealed that Ohio has around 1,400 to 1,500 or so domesticated bison across the state, plus a few small herds present on state or metro parks.

This herd had at least 50 head, which is not bad-sized, it seems to me. The bison seemed rather small, but perhaps that is just because I was at a distance from them. I’ve had buffalo meat and it was pretty good. It doesn’t really taste that different from beef. It is a shame that the bison population remains so decimated in the U.S., but at least they are still not actively being eliminated, as prairie dogs still are, nor are they extinct, like passenger pigeons.

I think this creature, however, may be on the road to extinction. At the very least, I can safely say that I have seen few of these critters on the ground. If you do a Google image search on “hay bale animals,” you may see some others of its kind.

Running to the east and south of Chillicothe is Paint Creek, seen in the background here, before it joins the Scioto River, the major river in central Ohio. I took this photograph to illustrate a phenomenon I constantly see along streams and rivers in Ohio (and, I’m sure, everywhere), which are trees that bow down towards the river.  I presume, but have no actual knowledge on which to base this assumption, that such trees bend towards the body of water because the soil near the water is softer and the weight of the tree causes it to tilt.  Although in such cases, one would think that a tree would be as equally likely to bend to the side as it would to the water. So it remains a bit of a mystery to me. 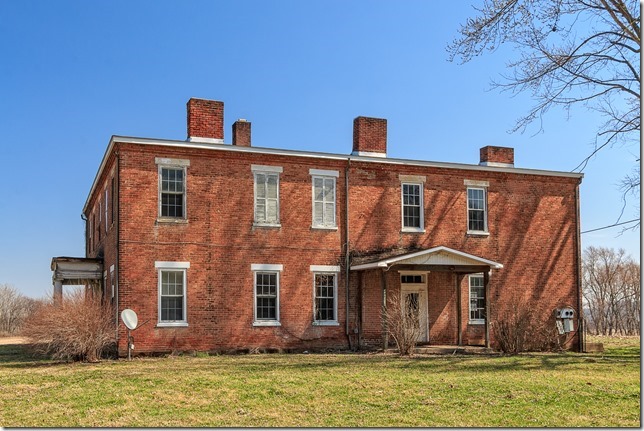 I took this photo of a stocky old house close to the Scioto River some miles south of Chillicothe and west of Jackson.

In contrast, here is a tiny cabin or shed maybe three miles or so south. This structure quite mystifies me. The presence of the chimney suggests that this was not some sort of toolshed or workshed but was built for human habitation.  And yet it is so very very small. It also doesn’t look like a smokehouse.

Here is a tighter shot of the shed/cabin. It seems like it could only have one room.  Perhaps it was a work-shed and there was a little fireplace or stove just for heat. It doesn’t strike me as some old hunter’s cabin.  In Ohio, those tend to be elevated, I suppose so that lazy hunters could just shoot at passing deer directly from the cabin.

I thought this residence was interesting because it illustrates the ramshackle and improvised construction that one often finds in back-country Ohio.  This home seems to have been constructed around two mobile homes in a T-shape. But note that frames have been built around them and somehow a second story of sorts added to the mobile home on the left.

To wind up the first half of this excursion, I present this mysterious small abandoned building about 4-5 miles southwest of Jackson. Presumably a church, from the cross in front, I can not seem to find what sort of church it was.

Stay tuned for the second half, as we go deep into the wilds of Appalachia and discover a very mysterious and only somewhat Freudian tunnel.