Excursion 20, Part 1 (The One Percent Shore)

In which our intrepid hero has an eerie feeling…

Every year the swallows come to Capistrano and the geeks come to Cleveland, because Cleveland is the mecca for a very geeky hobby, a World War II strategy boardgame called Advanced Squad Leader.  Never heard of it?   Do not fear,  you are not alone.  Imagine the boardgame Risk.  Got it?  Not imagine someone with a pocket protector yelling at you at the top of his lungs:  “IT’S NOT RISK, ASSHOLE.  IT’S A MILLION TIMES MORE COMPLEX AND IT IS ABOUT WORLD WAR II!”   The first week of October is ASL Oktoberfest, the world’s largest tournament for ASL and ASL players from around the world come to Cleveland to spend a week in a hotel playing a game.

Like the other ASL crazies, I spent nine days in Cleveland.  Rather than simply head back to Columbus when it was over, though, I wanted to explore.  One of the areas of Ohio that I had seen the least of was the far northeastern corner of the state, so since I was in Cleveland already, I decided to head not south but northeast, tracing the shore of Lake Erie up to the Pennsylvania border.

Readers of this blog may remember that I have a bug up my ass about Lake Erie.  Specifically, I hate it that Ohio allows shorelines to be private property (unlike many other states).  This means that people can buy lakefront property and basically wall off access to the shore.  Repeat this thousands of times and you have Lake Erie, a “great” lake that most Ohioans can barely access at all without paying for said access.  This gets me quite angry and riles up all my “working class hero” juices as well.

As we’ll see (and have already seen), different parts of the Lake Erie shore have different feels to them.  In the vicinity of Cleveland, however, in the city and to the west and east of it, lakefront property is primarily the province of the wealthy.  Mansions line the shores of Lake Erie in Greater Cleveland (with some exceptions).  The average Clevelander can’t access virtually any of it.

Here’s a typical Cleveland lakefront mansion.  Fenced in, long driveway, huge house, and Lake Erie behind the house, hidden from view—and the shore totally inaccessible to Ohioans.  Cleveland reached its peak of influence and wealth in the early 20th century and many of the mansions along the shore date from that era, but increasingly there are newer and ever larger houses being built.

Here is a newer lakefront mansion, presumably built on the ruins of an older one.  The lack of a fully paved driveway is unusual; I am not sure if this is a permanent condition.

These mansions don’t necessarily but right up against the lake—some of the properties are very extensive and the lake is quite a ways beyond the house.  Without Google maps, you can’t really tell, because you can’t even see the lake. 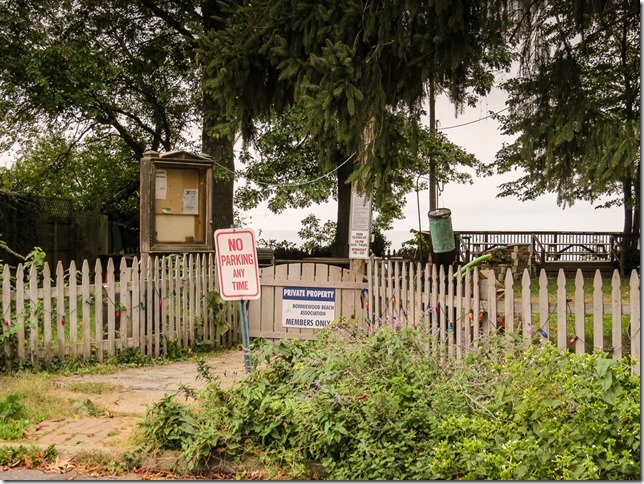 Not all of the shoreline has properties backed up right on it.  In some places, there are city blocks that run north-south, ending at the shore.  But even though the shore isn’t blocked by mansions doesn’t mean that you or I can access it.  Instead, at the shore end of all these streets are blocked off areas owned by “Beach Associations” and you aren’t welcome.  But these are about the only way that middle class (more or less) Clevelanders can have their own beach access, by buying a property near the shore that allows an association membership.

Once you get away from the immediate shoreline, the swank goes away fast.  This is a decidedly non-one-percent stretch of Lake Shore Drive.

In those neighborhoods with the north-south roads going up to the shore, you can find non-mansion housing.  Some of the smaller residences are even affordable.  In some neighborhoods, the architecture is far from cookie-cutter.  Many of the houses have something of an “Alpine” look to them, as in this example. 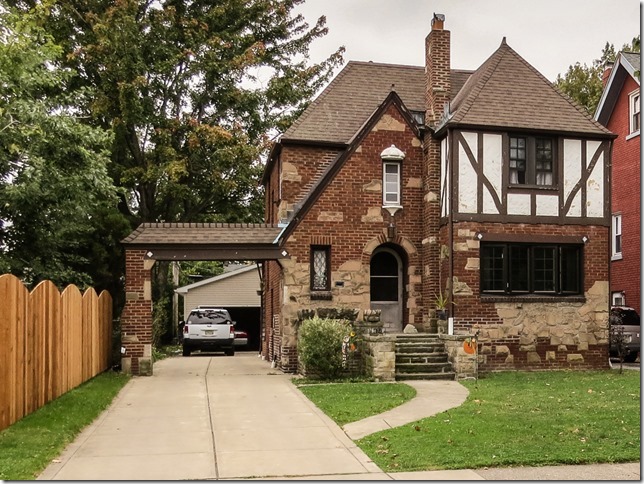 Here’s another interesting house.  These houses are perpendicular to the shore of Lake Erie and south of it about a block.  This is just a great looking house and it is a shame that modern houses look so much alike and don’t even bother to go for unique looks.

In some of these neighborhoods, there is still a “lakeshore” street in addition to the perpendicular streets.  These streets often have what you might call “mini-mansions.”  By that I mean that the homes are conspicuously upscale and conspicuously larger than normal or necessary, but they are unaccompanied by the huge property and gated area.  So, mansions without their estate, essentially.

Another mini-mansion—you can almost get a whiff of Lake Erie behind this home.  Note the “Germanic” architecture that I alluded to earlier.

Ah, the beach!  And, no, you can’t go there.  This part of the shore, in Euclid, Ohio, is for members of the Edgecliff Club only. 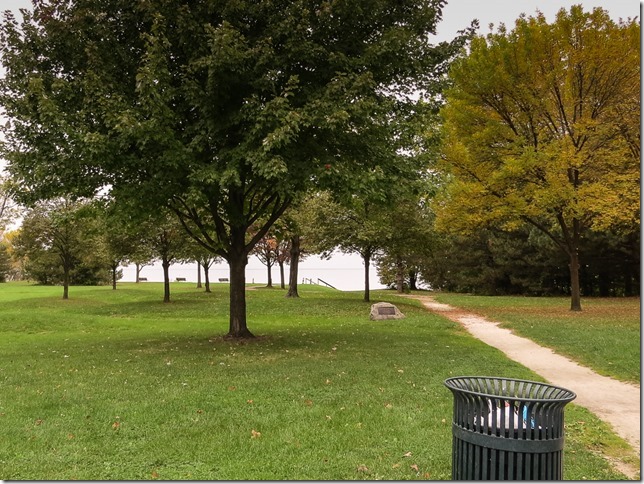 There are only small areas of the shoreline that are open to the public.  This is one of them; I believe this is at Cleveland lakefront State Park.  You can actually see Lake Erie in this photograph, though the reflection of the cloudy sky on the lake makes it almost indistinguishable from the sky itself.

As you get out into the suburbs, you start seeing a new feature:  large condo buildings.  They are not as common as in some places in, say, Florida, where they line the shores like dominos, but there are a decent number of them.

I suppose they are oriented north-south like this so that there isn’t a whole side facing away from the lake.  With this orientation, most people can see at least a sliver of the lake from their balconies, so I suppose it is more “democratic.”

Here we see a stretch of non-one-percent lakefront homes, though I presume they pay a big premium for the location.

Lots of the homes have little “nautical” touches to them, as in this example of a mariner tree sculpture.

The more modest housing may also be up against the other use of Cleveland’s lake front:  the industrial side, filled with power plants and the like. 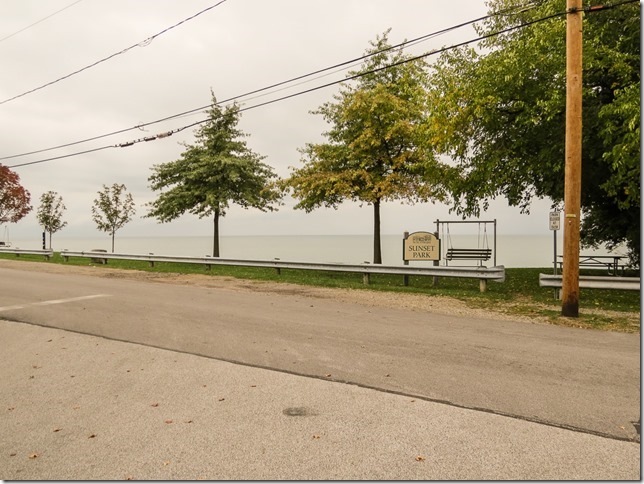 Willoughby, Ohio, is another suburb of Cleveland (population 22,268, salute!).  Unlike some of the other places in the area, Willoughby tries harder to provide its citizens with access to Lake Erie, largely through two parks.  This is one of them, Sunset Park, which is best for walkers and joggers because it is narrow and has a steep bank.  The larger Osborne Park has more in the way of facilities and lots of things for families to do.  Thumbs up for Willoughby!