In which our intrepid hero encounters aged agrarian advertising…

I learned a new (to me) word the other day:  earworm.   You and I and everybody we know have experienced them; an earworm occurs when a piece of a song or melody gets stuck in your head and you can’t get it out.   It seems to me that there is a linguistic equivalent, of sorts, to an earworm, and that is when a particular phrase gets into your head.  It may not repeat itself but it is there and will come to mind, unbidden, with the right trigger.  Let’s call them eyeworms, just for the sake of convenience.  Earworms and eyeworms alike must be gold to advertisers.  Surely that is something they seek:  a commercial jingle or an advertising pitch line that lodge in people’s brains like G.I.s on Omaha Beach.  Think for a moment—do you remember any commercial jingles or advertising slogans from your childhood?  God knows I can.  “I’d like to teach the world to sing, in perfect harmony, I’d like to buy the world a Coke and keep it company.”   “When it absolutely, positively has to be there overnight.”  “I can’t believe I ate that whole thing.”  “You’ve come a long way, baby.”

The television show Mad Men has helped illustrate the genius behind a perfect advertising campaign or a perfect slogan.  Superbowl ads may be slick, well-produced and funny or entertaining, but they are mostly spectacles, water cooler moments, rather than something long-lasting, something that can define a product for a decade or more (“Where’s the beef?”).

I came across what was, to me, a rather geniousy advertising slogan (at the bottom of this post, if you are impatient) during my 19th excursion across Ohio, made on October 4, 2013, just as fall was beginning to make its way into the countryside.  I was actually beginning a vacation.  Every year I attend a week-long gaming tournament in early Ohio (I am the only person who comes back from his vacation paler than when he left for it) and I was on my way.  But I decided to make a whole day of the two hour trip to Cleveland and explore some more of the Ohio countryside.   Thus my general direction was northeast from Columbus, though in a meandering way.

One of the first things I saw along the way was a dilapidated old barn, not yet collapsed but certainly beginning that journey.   Behind the wooden fence, it almost looks like a museum exhibit of some sort. 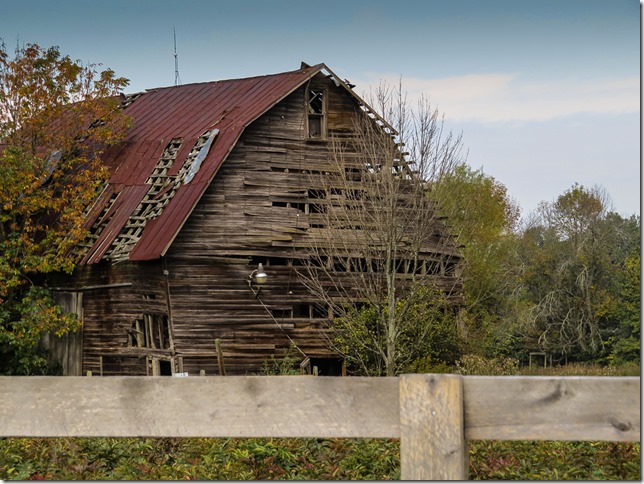 The barn is decaying in a fascinating way, with boards becoming loose and starting to stick out, almost as if there were a gigantic invisible thumb pressing down on the building, squeezing it outwards.

Fall was just beginning to make itself felt in the foliage.  I gleefully anticipated getting some great pictures of fall foliage, but the best time for that in 2013, the second half of October, just did not cooperate with me.  Work and weather conspired against me to keep me away until early November, after much of the autumn glory was gone.

You can see here from this pleasant countryside shot that most of the trees have not even begun to turn color.  Incidentally, these sorts of elaborate wood fences are not that common in Ohio, but I ran into several of them on this particular trip.

I saw a silo of sorts on top of a little hill, so I decided to drive up to the top to see if I could get an interesting shot.  Sadly, the view was fairly mundane.  In this photo, the fact that it is taken from a hill is almost lost on the viewer.  I am still very much learning how to photograph hills or take photographs from them. 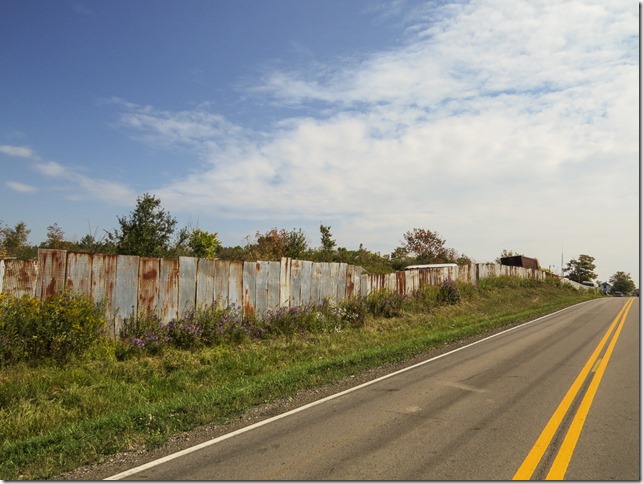 You can semi-regularly find high fences like this while out driving (in Ohio or many other places); what is behind them, of course, is an automobile junkyard.   As a kid and later, I had an interest in looking at old, junked cars, so it was always frustrating to find them obscured from view like this.  I couldn’t understand why, other than maybe people thought those cars were ugly and wanted to hide them from view.  It wasn’t until decades later that it finally dawned on me that the fences were there to prevent pilferage of auto parts (I had not known that selling parts was how junkyards made money). 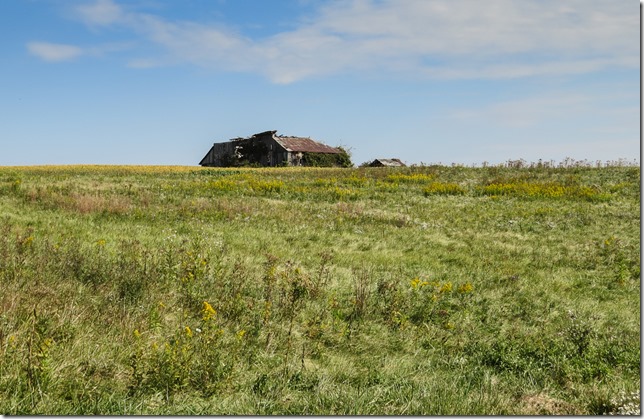 Driving alongside one large, relatively low hill, I saw the silhouette of something on the horizon, something jutting up from behind the crest of the hill.  Pardon my moment of geekiness here, but I could not help but be reminded of that moment in Star Wars where the sandcrawler creeps up onto the horizon.  From a distance, the structure looked like some low, fat building. 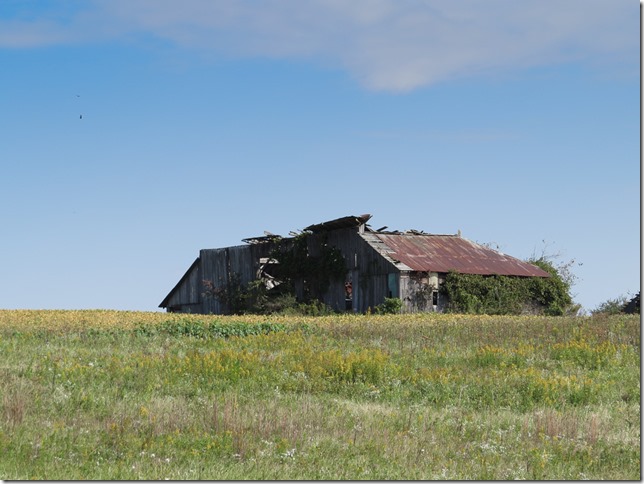 When I zoomed in, however, I discovered the truth:  the structure was originally a large barn, but its roof and top structure had totally collapsed down into the barn, almost as if it had been decapitated.

This tiny barn is still standing, though clearly abandoned and no longer in use.

When I drove into wooded areas, I could start to find signs of the changing season.

There is actually a tiny streamlet in this photograph, running underneath all those fallen trees, but you have to look carefully to see it. 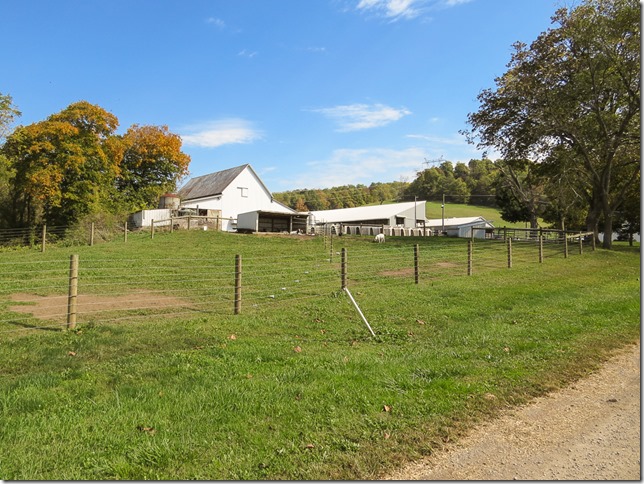 I emerged from the woods to find a well-kept goat farm, if that’s what such things are actually called.   Ohio has a number of goat farms, though I don’t come across them very often—I may have come across more llamas than goats, actually. 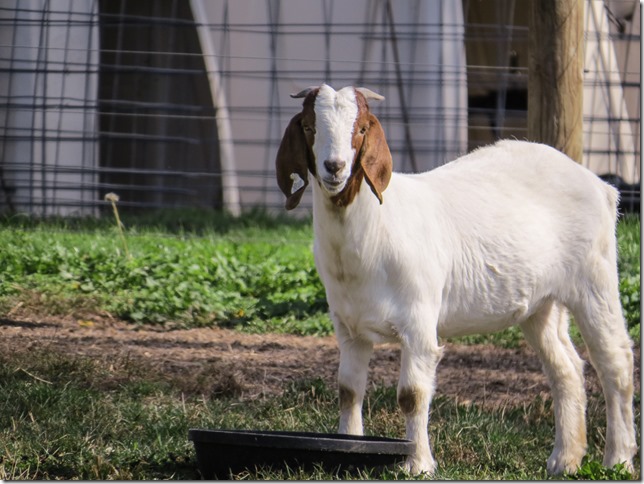 I am far from a goat expert, but this goat looks like a young Boer Goat.

Any time you drive through the countryside, you’ll find abandoned houses in varying states of decay.

In all this time I had not actually gotten very far—only a county or two away from home.  I found myself in the village of Utica, Ohio (population 2,132, salute!).  Utica is a small town and not home to much, but it is home to the Velvet Ice Cream Company, a significant regional brand of ice cream that is celebrating its 100th anniversary as I write this.  In Utica, I was struck by this stately old brick building.  Buildings like this project such an air of solidity and permanence that it almost seems as if they are solid rather than full of rooms. 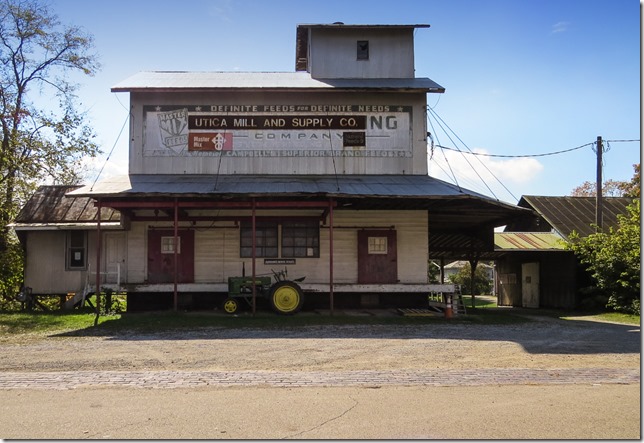 However, it was while leaving Utica that I came across an even more interesting building, the building of the Utica Mill and Supply Company.  First, I was struck by the unusual structure, with its three levels of decreasing size, as well as the fact that they all seem to be built on a platform—almost as though one could attach a truck to it and simply tow the whole building away on wheels.

But what I liked most—what I absolutely loved—was the old advertisement on the second floor for Master Mix Feeds that displayed the advertising slogan “Definite Feeds for Definite Needs.”   This slogan seems to have debuted in 1939 and was trademarked in 1953.  And ladies and gentlemen, this is a slogan!  Let me explain what I mean.  A perfectly serviceable slogan would have been “Different feeds for different needs.”  It is a bit more to the point, after all.  For all I know, that may have been their “first draft.”  But this is where the genius comes in.  Replacing “Different” with “Definite” turns the slogan into something distinctive and memorable.  It is stronger, more powerful.  It tells you, first, that you have very particular needs, that you are not some average livestock farmer, but that you need something that fits your needs exactly.  And, furthermore, it tells you to your face that Master Mix has the definitive feed for you.  Why go anywhere else?  Master Mix knows exactly what you want and can provide it!  Definite Feeds for Definite Needs!  This is one of my favorite advertising slogans from anywhere.

This is a bit of an anti-climax, I know, but since the scene’s elements were more or less timeless, I tried the image in black and white, but this is an instance where I prefer the color version.