In which our intrepid hero ducks and cranes…

One of the things I like best about eastern Ohio is the surprises of slopes.  Western Ohio is flat, often flat-flat, and its vistas cannot surprise.  But eastern Ohio is full of hills, usually wooded, and sometimes quite large.  As a result, if you are driving through eastern Ohio you are sometimes gifted with the pleasure of arriving at the top of a hill or ridge to see a wonderful expanse of countryside stretching out before you.  All of a sudden, there it is.

One of my favorite “surprise vistas” came on this trip into southern Ohio, on my 17th excursion, in early September 2013.  I was at this point pretty close to the Ohio River—maybe a county away at most.

Arriving at the top of a hill, I looked down to see a wonderful stretch of scenery, the downslope of a hill stretching off into the distance, the grass almost manicured by the cows that clearly grazed on it, with a picturesque little pond in the middle, while off in the distance stood thin, tall, graceful trees, rising straight up out of the grass.  It was like a golf course created by nature.  I immediately started taking photographs of it, praying they would turn out nice.  I can’t speak for your opinion, but I think the above image does a reasonable job in capturing how magical that moment was.

Later, when I got back home, I started experimenting with post-processing this particular photograph, trying various means to bring out more to aspects of the photo.  I thought the photo held up pretty well in black and white, despite losing all the green, because there were a lot of interesting contrasts (including the light reflecting off the caterpillary plants in the foreground). 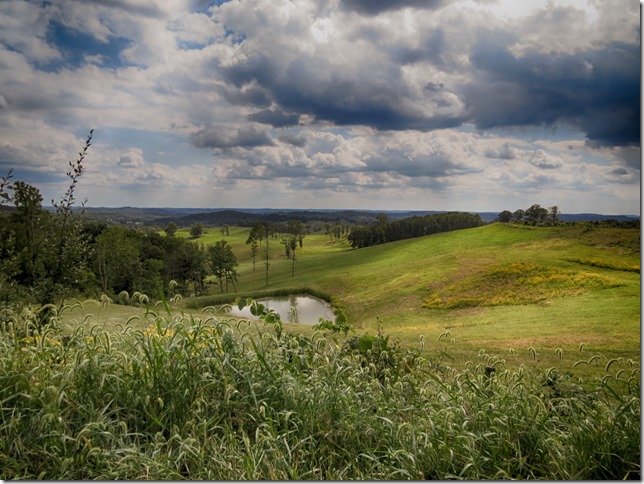 I also tried using single-image HDR processing on this image, because I thought it might really bring out some deep contrasts.  It did, especially in the sky, bringing much more energy to that part of the photograph.

Lastly, here’s a slightly different angle on this scene, and zoomed in a bit.

This is a very unremarkable shack, but I was tickled by the crude “man cave” sign on it. 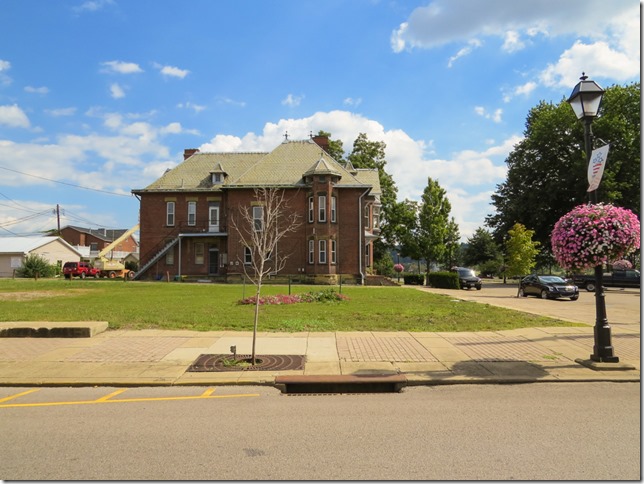 Soon, I had reached the Ohio River village of Gallipolis in far southern Ohio.  This is one of Ohio’s older settlements, originally settled, oddly enough, by the French (thus its name).  It is an attractive village, with many nice older homes (as above), but sadly has been affected by the demographic collapse that has affected so many other Ohio River population centers.  The population of Gallipolis peaked in 1960 at 8,775 before embarking upon what can only be described as a precipitous drop.  Now, 50 years later, the population is well under half that, at only 3,641 (salute!).

Gallipolis is a long, narrow village stretched out against the Ohio River (like Stalingrad on the Volga).  Here is a view of the Ohio River from Gallipolis City Park.  Note that there are three pilings stretching out into the river.  I wonder if there had been some sort of dock there at one point.  The pilings do not seem high enough to have been related to any sort of bridge. 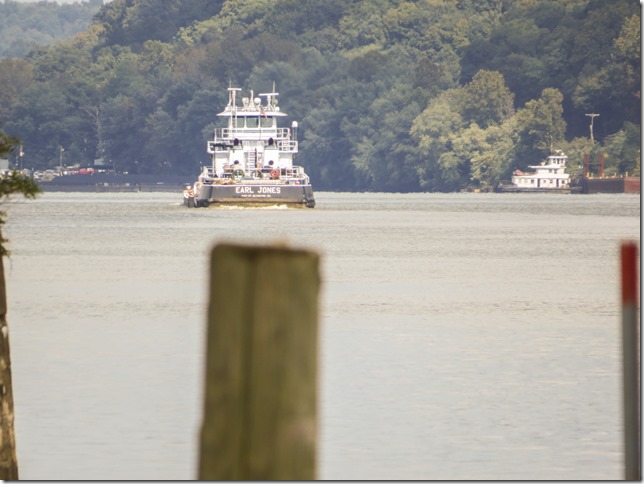 The Ohio River is very much a navigable river.  Much of its traffic consists of tugboats and barges full of coal or other materials.  But there are also fishing boats and tourist boats and many private craft.  Here, chugging upriver away from me, is the Earl Jones, a “towing vessel” (tugboat, I presume) built in 1973 in Delaware but currently owned by a company out of Houston, Texas.  It is a camel hair’s longer than 126 feet and has a gross tonnage of 486 tons. 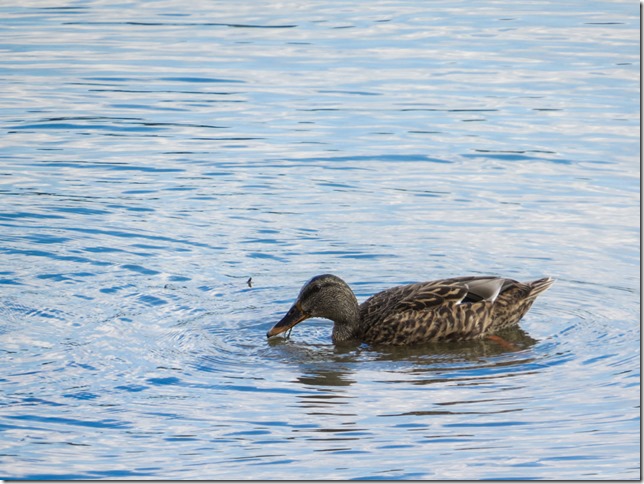 A fair amount of waterfowl was out and about, mostly ducks, including this specimen.  Given that there is actually a bird sanctuary very nearby, I suppose this is to be expected.

I am extremely far from being a birdwatcher, but even I got excited at seeing this crane, as I had never seen a crane before.

I am not sure what type of crane this is.  There apparently is only one species of crane native to Ohio, the Sandhill Crane, but those cranes seem to have a very red patch on the top of their head, which this crane clearly lacks.  I was glad to be able to get a few decent pictures, especially as these were taken from some distance away.

Here is part of Gallipolis’s main drag, with a typical array of early 20th century buildings. 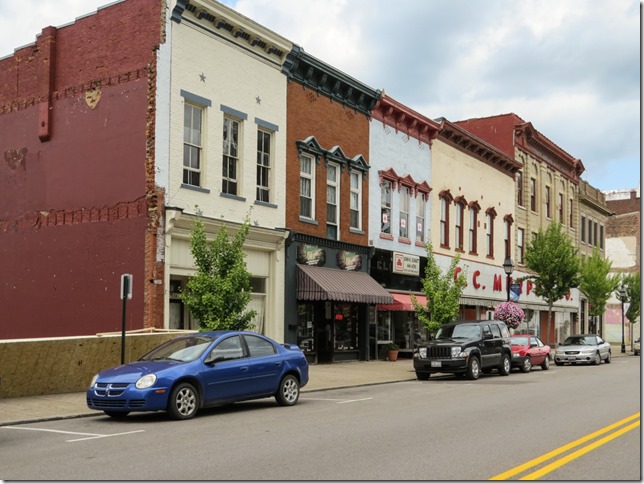 Here are even more.  Note that there’s a G. C. Murphy Co. store sign.  The G. C. Murphy Company operated variety stores (kind of like Woolworth’s) across Appalachia and along the East Coast (500+ stores at its peak), beginning in the early 1900s.  This was the sort of place where you could pick up some sewing materials and have a quick burger and shake at the lunch counter.  The Murphy store empire lasted until the mid-1980s, when the Ames Department Store company bought it out, converting many into Ames stores.  Most of the remaining Murphy Co. stores were sold a few years later to another company, which eventually went bankrupt in 2001.  Although the sign is intact, I believe that the store underneath it is the River City Mall. 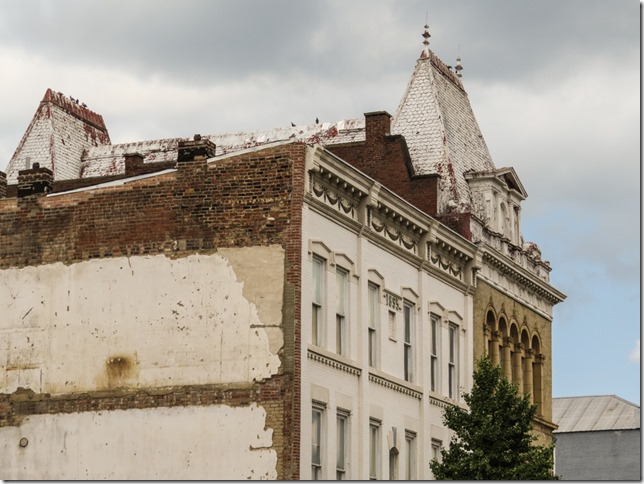 This look at the tops of some of these buildings shows how they’ve aged.  The building on the left was built in 1895, nearly 120 years ago. 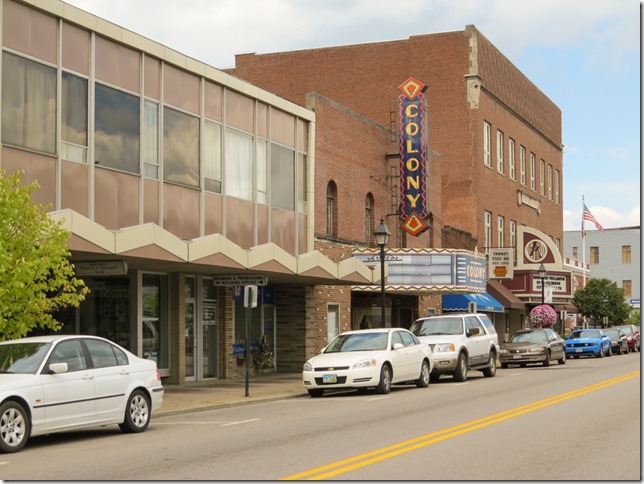 This photograph shows two clearly different era.  On the left there’s an office building with that jagged overhang look (I am sure there’s a name for it) that was so popular in the 1950s-1960s.  To its left is the Colony Theater building.  The theater, a single screen theater, dates back to 1937.  The theater, alas, is not in operation.  The building was vacant for many years, then purchased in 2013 by some local developers intent on refurbishing it (though not as a theater).  This marquee may not even be here a year or two from now, so enjoy it while you can. 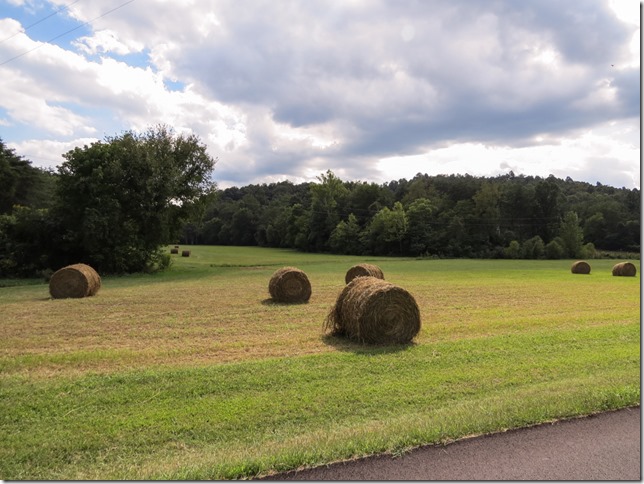 After exploring Gallipolis for a while, I decided to go ahead and head home—so I was soon back in rural Ohio.

When farmers grew hay or alfalfa and baled them in rectangular bales, they would go around and pick up the bales from the fields and (if growing it for their own use) then stack them under a shed or in a barn somewhere.  The larger round bales protect the hay better (although they will ferment, which horses won’t eat but cows will) and as a result many farmers do not even bother to move the hay after baling.  Instead, they simply let the bales sit where they are and go and get some when needed.  A week ago I was stuck behind a tractor pulling a trailer on which numerous of these large bales were precariously perched (and not secured).  Even though I kept my distance, I couldn’t help but wonder what one of those bales would do to my car (and me) if it fell off the trailer and rolled down the road into my vehicle.

While driving home, I came across a very unusual site—produce!  Based purely on my extensive driving around the countryside, it is clear that Ohio’s two main crops are corn and soybeans.  Beyond that, hay is the most common crop grown and then lesser crops:  a little winter wheat, various fruit orchards (apples, peaches), vineyards, even Christmas tree farms.  But what I virtually never see is produce.  There are various farmers and part-time farmers who may grow a small amount of produce for roadside stands or “pick your own” businesses or even local consumption, but I have never once, for example, come across a field of tomatoes.  Thus I was quite surprised to find this field growing some sort of produce.  Unfortunately, I am vegetably illiterate, so I cannot tell you exactly what was grown, although I would think it was some sort of lettuce or cabbage.

[Update:  Someone has informed me that these plants are tobacco.  There is a small amount of tobacco grown in southern Ohio, but I did not think of that.] 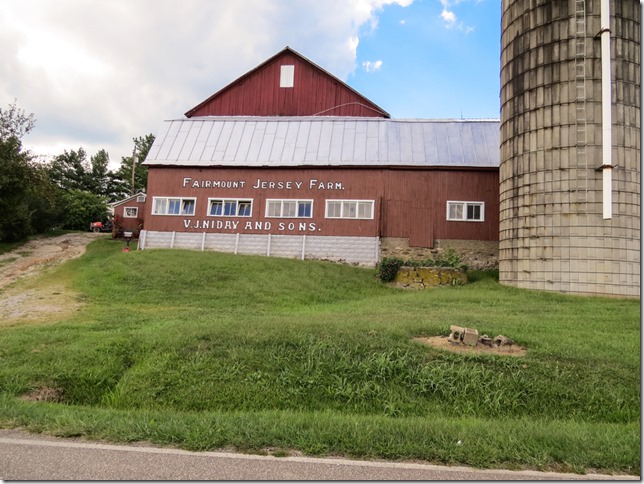 A very well kept barn at the Fairmount Jersey farm.  It’s a general purpose barn, used for storing equipment, cows and other items.  Part of the barn (the upper part in back) already existed in 1904, when Victor Jerome Niday bought the farm—it dates back to 1890 or so.  Niday built the structure you see in front, some time around 1936, using it as a dairy barn (until 1993).  The “sons” were Victor Paul Niday and Frank Niday; a third son, Carlos Niday, had his own dairy.  This farm has been in the family for three, possibly four generations now. 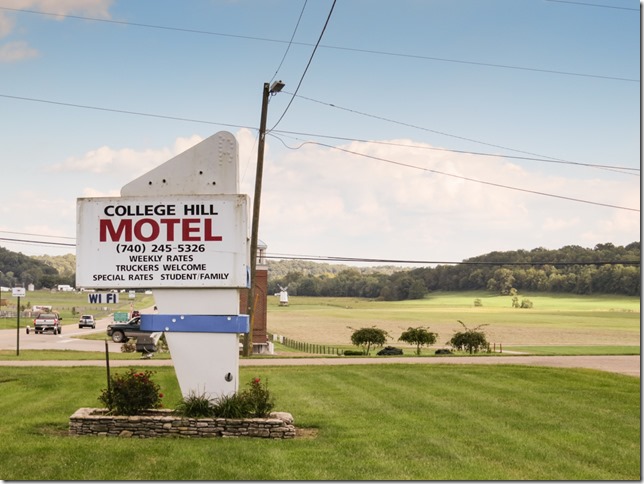 I am always interested in old motels and the College Hill Motel certainly fit that bill.  The motel is located in Rio Grande, Ohio, a tiny hamlet of 830 (salute!) that causes me—someone who grew up next to the actual Rio Grande River—no end of irritation, because residents pronounce the place Rye-O rather than Ree-O.  Grrrrr.  This area of Ohio is where Bob Evans Restaurants got its start (the original farm is still in working existence, but the corporate headquarters are now in Columbus).  I can only presume that the “college” referred to in the Motel’s title is the University of Rio Grande/Rio Grande Community College.

It actually looks pretty well kept up and attractive—far more so than most such old motels.