Excursion 14, Part 3 (On the Trail of John Hunt Morgan)

The Civil War has long fascinated me.  Of course, on one level it should, as I have a Ph.D. in American military history.  But it began long before that.  I probably have my grandparents to thank for that, because at some point they purchased American Heritage’s Picture History of the Civil War (1960) for my uncle Dennis, when he was a child.  This amazing book, containing fascinating diagrammatic paintings of battlefields and text written by famed Civil War historian Bruce Catton, remains today about as perfect an introduction to the Civil War as I could imagine.  I soon discovered that they had related gems on their living room bookshelves, including Reader’s Digest abbreviated versions of some of Catton’s histories.  These were among the earliest books I read on military history and certainly had a lifelong influence on me.  They also produced another effect on me that still lasts, too—a wistful realization of the immutability of history.  Sadly, no matter how many books on the Civil War I read, no matter what new material they may uncover, McClellan never manages to take Richmond; Hooker always loses his nerve.  It is Groundhog Day, but where Bill Murray never changes.

Ohio was largely untouched by the Civil War—the land, not the people, of course.  In some respects, even where I grew up, in the west Texas town of El Paso, the Civil War was physically closer.  El Paso (then known as Franklin) Confederates took over Fort Bliss in the town and it was from El Paso that Sibley launched the Confederate invasion of New Mexico (a campaign very loosely portrayed in The Good, The Bad and The Ugly).  Union troops from California later retook El Paso.  My high school, Eastwood High School, has as its mascot a Union Cavalry trooper, because the street the school sits on was named after a Union officer who died at the battle of Valverde in New Mexico (and the school actually has a cannon from that battle).  The Civil War affected the people of Ohio far more than the people of West Texas and New Mexico, but affected the land less.  Only one Civil War battle took place in Ohio, a sharp skirmish at Buffington Island on the Ohio River as part of John Hunt Morgan’s cavalry raid (see below).

Still, as limited as the Civil War was on the lands of Ohio, I would encounter a bit of that heritage on my July 13 expedition into east northeast Ohio.  By this point in the journey, I was deep in the hills and woods of eastern Ohio, heading generally in the direction of the Ohio River. 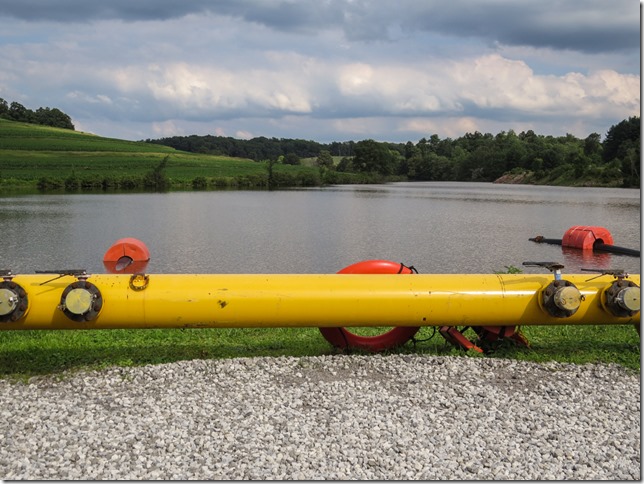 As I have mentioned in previous blog entries, eastern Ohio is being transformed by the shale oil/fracking boom.  This was especially visible in the summer of 2013 as suddenly a spiderweb of pipelines began to be dug across this region of the state.  In future years, these pipelines will be mostly underground and thus far less visible, but right at this moment one could frequently see them above ground, not yet buried, alongside the raw and exposed earth.  Here a section of pipeline appears next to a small lake in eastern Ohio.  I don’t know what lake it is; I never anything naming it.

It might well have been a small lake adjacent to the hamlet of Summitville, Ohio (population 135, salute!), which is a tiny cluster of houses on the western edge of Columbiana County.  According to land records, this country post office was built in 1930, more than 80 years ago.

Next to the post office is an equally old building, which clearly was a garage belonging to someone named Hays.  There have indeed been Hays hailing from Summitville, but I could not track down the original identity/owner of this building. 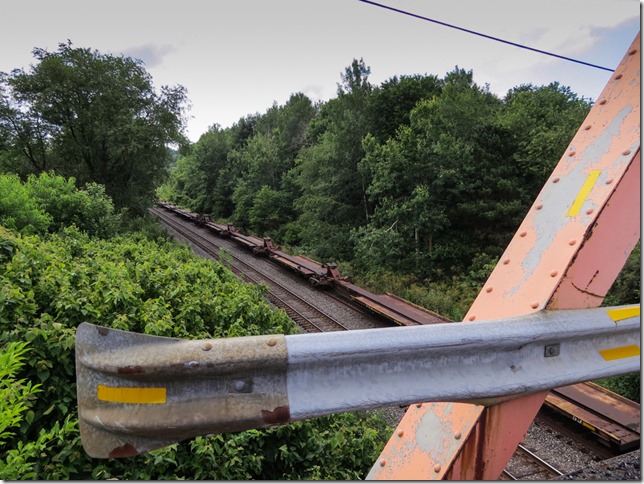 A railroad runs by Summitville, which at one point was probably a major reason for its continued existence.  Here we see a long line of empty flatcars.

You can tell a bridge is very narrow if you the driver are closer to the left hand side of the bridge than the right hand side.  This was a nice little bridge, though. 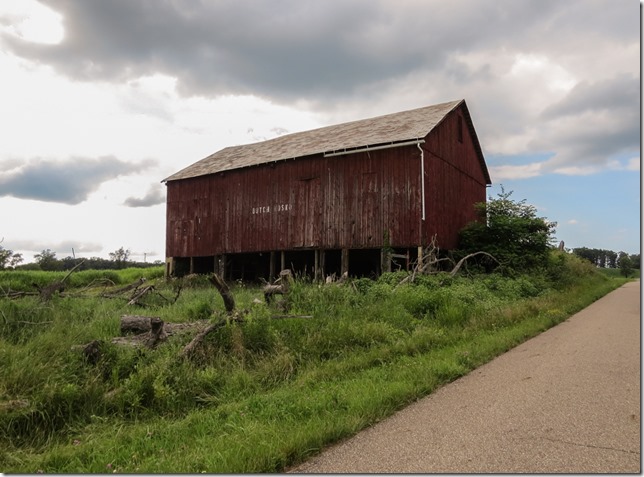 This striking barn has a name painted on the side:  Butch Kosko.  I believe this is a reference to Arthur “Butch” Kosko, who was the long-time mayor of Summitville until he died in office some years ago.  Too bad he didn’t live longer; his successor ended up in jail for soliciting sex acts from a minor. 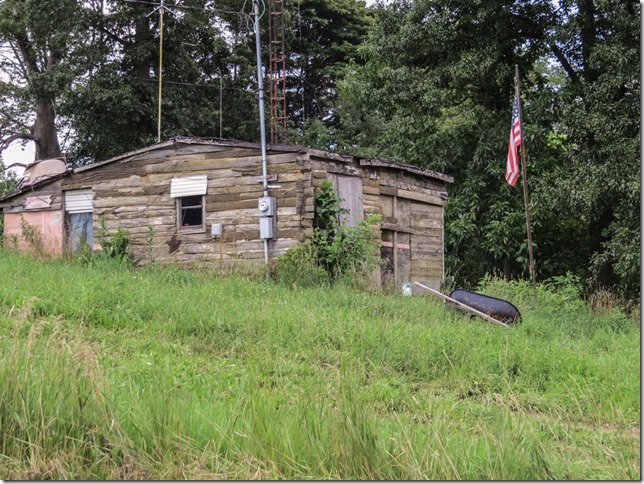 When I first came across this tiny, odd shack, I did not think it was occupied.  However, I realized that the flag hanging in front probably did indicate that someone lived there.

I have said previously in this blog that eventually one can find any sort of vehicle junked in rural Ohio.  Here’s an example:  a junked fire engine.  This is on State Route 518 (in fact, you can find this Fire Engine on Google Maps satellite view if you follow the road north out of Summitville until it intersects 518, then zoom in all the way and follow 518 east; or simply paste 40.703714,-80.855499 into Google maps).

At various points during this entire excursion I would occasionally be on a road with signs identifying it as part of the “John Hunt Morgan Memorial Trail.”  These signs debuted in the summer of 2013 as part of the sesquicentennial commemoration of the Civil War.  As someone with a background in military history, and as someone who had lived in Ohio for a quarter century, I certainly knew who John Hunt Morgan was.  Morgan was a Confederate cavalry general from Kentucky who had taken part in several high-profile cavalry raids into Union territory.  In the summer of 1863, Morgan decided that he would launch a raid up through Kentucky and across the Ohio River into “Yankee” land.  Braxton Bragg, his commander (and my “favorite” Confederate general), had condoned the raid into Kentucky but ordered him not to cross the Ohio River.  Morgan disobeyed this order and crossed the Ohio river on July 8 near Mauckport, Indiana, with some 2,400 men, causing something of a panic to southern Indianans and Ohioans.   On July 13, Morgan entered Ohio, exactly 150 years to the day before this very trip I was on.

The Union commander in the Ohio valley region was the famous Ambrose Burnside, who reacted quickly to Morgan’s raid, concentrating some forces to defend sensitive areas while sending other forces to trap Morgan.  As Morgan rode across Ohio, the net around him grew stronger and at some unknowable moment, what had intended to be a raid had morphed into an attempt to escape.  Anticipating such an attempt, Burnside also sent troops to block Morgan’s most likely escape routes.  Morgan attempted to retreat back across the Ohio River into West Virginia at the fords near Buffington Island on July 19, but Union cavalry (and gunboats) were waiting for them and devastated Morgan’s raiders, capturing some 750 of them.  Now desperate, Morgan headed upriver and tried to cross the Ohio river again near Belleville, West Virginia.  Here several hundred Confederates did slip across the river and eventually to safety, but the Union forces prevented Morgan’s main body from crossing.

At this point, Morgan headed north into the hills and woods of Appalachian Ohio, probably not with any real goal other than simply to avoid capture.  He only had around 350 men left of his original 2,400, and they were exhausted and hungry.  Not only were Union forces hot on his heels, but unbeknownst to Morgan, Union Major George Rue of the 9th Kentucky Cavalry was ahead of him with around 275 men.  Rue positioned his men in a defensive formation across the path of Morgan’s retreat, trapping the Confederates between himself and their pursuers.  After unsuccessfully trying to bluff his way out, Morgan surrendered to Rue.  It was the last of a number of Confederate failures in July 1863.

Morgan himself ended up in the Ohio Penitentiary, where he eventually organized a daring escape.  He returned to Confederate service but died in the summer of 1864 in a skirmish with Union troops.

Because of the roadside signs, I knew I was somewhere along the Morgan trail.  What I did not know was that I was virtually at its end.  As I drove down State Route 518 I caught something out of the corner of my eye—it looked like a statue.  I stopped the car and backed up.  Sure enough, it was a statue—moreover, it was a tree sculpture.  When I saw the Confederate flag in front of it I realized that it almost had to be a sculpture of John Hunt Morgan (below).

It looked like some neo-Confederate had built a shrine to Morgan.   I wasn’t particularly enthused about this, but because a tree sculpture, I thought I would take a photo of it anyway.  While I was taking this photograph, two men came out of the house and one of them, the homeowner, wanted to know what I was doing (although one would think he could have guessed!).

I greeted him and told him about my blog and that I was taking a picture of his tree sculpture.  At this point, his demeanor changed quite a bit.  He invited me to come on into the yard and get a close-up shot of it, so I did.

It was indeed a sculpture of Morgan.  The homeowner (who declined to be photographed or have his name printed) told me that he had found a sculptor to create this for him.  Moreover, it turns out that this was not simply a Confederate shrine.  He explained to me that the sculptor was right now making another statue, this time of the Union officer who accepted Morgan’s surrender, and that he hoped to have it in place by the time of the 150th anniversary of the surrender.

It turns out that the actual surrender location was not all that much more than a stone’s throw away.  The homeowner, whose family had held this property for many generations, essentially grew up in the shadow of the surrender, which was the most important thing ever to happen to this locality, and he was filled from birth with lore of Morgan’s raid and the surrender.  Thus it was a very personal thing for him.

He showed me some of the research he had done at the local historical society on the raid.  Then he and his friend decided to show me what they were working on right now.

The two of them were in the finishing stages of creating a replica (wooden) Civil War era cannon, which I suppose they were going to emplace near the sculptures.  It was actually a very nice job (though small and with thin wheels).  They were very excited about it and, actually, the homeowner was just enthusiastic about being able to share his love for the story of Morgan’s raid with someone else.  This was one of those unplanned encounters that make trips such as these worthwhile. 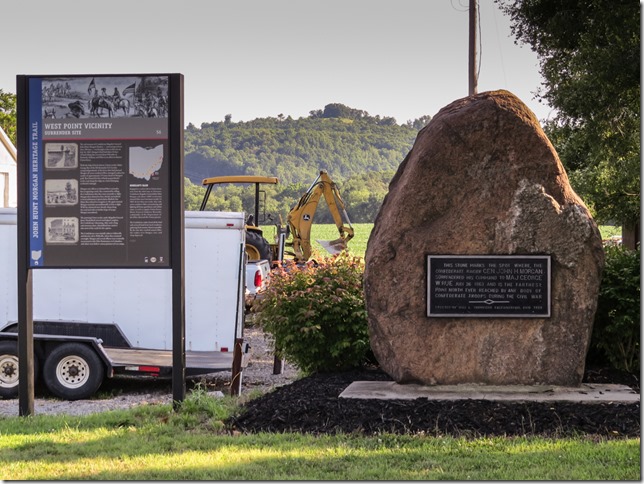 The homeowner told me that the historical marker commemorating the surrender was just down the road.  He also told me that this wasn’t the original location for the marker; that kids had hung out at the previous location to get high or something, so they moved it (to someplace more visible?  I was not entirely sure).  Here is the historical marker.

I found the text on-line, so I include it here (click to get readable size):

Was Morgan perhaps still thinking of crossing the Ohio River (only about 10 miles away).  I don’t know.  Ohio raised some 320,000 soldiers during the Civil War (including 5,000 African-Americans).  Over 35,000 of them died during the conflict, touching most families in Ohio.  But this was the only time the war itself touched Ohio soil.