In which our intrepid hero experiences the concord of (New) Lexington…

In America, there is a great gulf between rich and poor.  Even greater than the gulf in income, I think, is the gulf in empathy and understanding.  Most middle class and an even greater number of wealthy people have no personal experience in what it is like to experience poverty—statistics clearly show that social mobility in the United States is not very high (in fact, among developed countries, the U.S. has one of the lowest rates of social mobility).  I myself am in a somewhat unusual position.  Twice in my life I have experienced extended periods of poverty, while currently I have a comfortable middle class income.  Moreover, because of the university I did my undergraduate work at and because of the job I currently hold, I have met or been friends with many people far wealthier than me, including a couple of billionaires.

When I was in college, one of my wealthy friends, trying to explain that she was not “stuck up” over class or wealth, said to me, “Money doesn’t matter very much to me; I just don’t think of it.”  Those words have always stuck with me, because to me they represent one of the most significant differences in outlook between the haves and the have-nots.   The poor simply do not have the luxury of not thinking about money.  They don’t have to worry about whether or not an ATM withdrawal or small grocery check will overdraw their account.  They don’t have to do a triage of their monthly bills, trying to figure out which ones they can pay that month and which ones they need to put off.  They have never been harassed by bill collectors or tried to lie to utilities, as I totally unconvincingly did one time, that my payment was late because I forgot to put a stamp on the bill and it got returned.  They have not experienced a minor car breakdown as being a financial disaster.

You know the phrase “Mo’ money, mo’ problems?”  The person who coined that phrase didn’t know what the fuck he was talking about.  That person never tried to donate plasma to make ends meet.  Many years ago, horror writer Stephen King (in a book called Danse Macabre) wrote something I will never forget.  He labeled the 1970s horror novel The Amityville Horror an economic horror story and thus answered the question “Why didn’t they just leave?” with the answer:  because they could not afford to leave.  Countless people experience their own personal moments of horror every day:  when a school announces an unexpected fee, when a child comes down sick, when a repair has to be made.

Someone actually observed to me a few years ago something along these lines:  “Why is it whenever I drive in [a poor neighborhood], everybody is out on the porch or the front stoop staring at people who drive by?  This person didn’t realize that not everybody could actually afford air conditioning and that people often spent summer afternoons or evenings outside because there was a breeze.

I guess that is enough working class hero ranting for today.  To get back on topic, somewhat, in these excursions, there are many interesting old buildings I’d like to take pictures of but don’t, because some of their current occupants are sitting out front and I don’t want to seem like what I am trying to do is to take a picture of them.  Winter is a better time for that sort of photography than summer.

Luckily, signs don’t pose such problems, such as this sign not far outside New Lexington, Ohio, in Southeast Ohio.  It is, I admit, a totally unremarkable sign, but for some reason I couldn’t not document the phrase “Get Off Your Asphalt – Become a Man of Steel.” 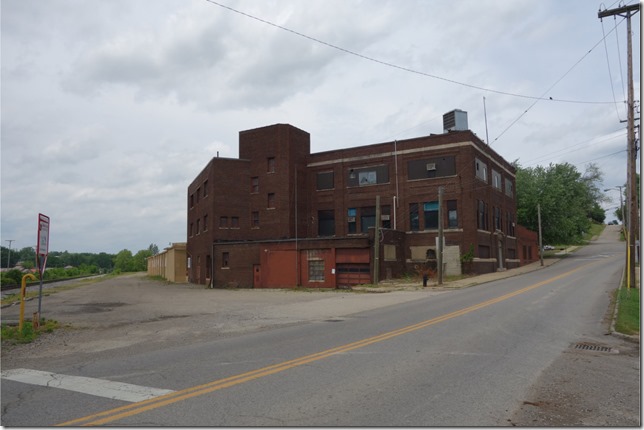 This building, its original purpose unknown, seems a stark symbol of the decline of much of the traditional industry of Southeast Ohio.  New Lexington, the county seat of Perry County, is a village of some 4,731 (salute!).  Typical of much of the area, it has relatively high unemployment and poverty.  It has lost nearly 20% of its population in the past 20 years. 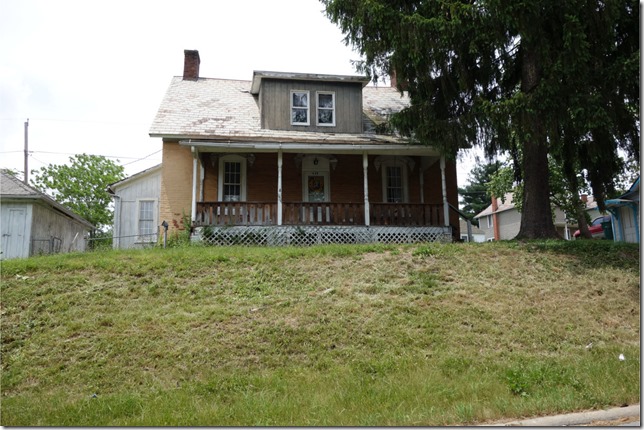 A very dubious silver lining of any depressed area is that it is fertile ground for people who are interested in dilapidated buildings.

Every now and then I will see a house with this structure:  a deeply recessed porch and part of the house pushed very far forward, with a half-hexagon front.

Never before this residence had I ever seen a house that was itself hexagonal in shape.  I am quite curious about the history of this unusual building.   I would have liked to have taken a better picture of it, but this was the best of the lot—the house is on a high-traffic road with no good place to pull over.

The Perry County Courthouse, I presume, complete with a howitzer.

This stretch of “downtown” New Lexington is fairly well kept up.

This is one of my favorite pictures of my entire blog.  I stopped at a gas station in New Lexington to get gas and as I was starting to get out of my vehicle, I glanced up to see the cars at the pump station ahead of mine.  The two individuals, an incredibly thin and wiry woman and a pot-bellied man all too comfortable in his body, both blocked form each other by the gas pump itself, was quite entertaining—sort of a reverse Jack Sprat situation.  I slipped my camera up for a quick candid shot and was rewarded by this. 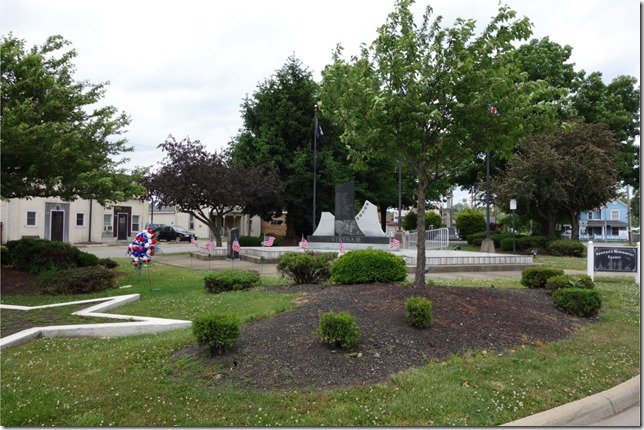 The Vietnam War memorial in New Lexington is quite nice.

Once past New Lexington, I was much more in the countryside, heading southeast in the general direction of Marietta.  Every now and then you’ll find a ruined home, as in this above example, which really makes you curious about its story.  When was it last occupied?

Luckily, some people very nicely maintain some quite old homes, as in this example.  I hope it will be around to stay for many years to come.

Most decorated barns that one sees have advertisements for some form of tobacco on them.  Occasionally you may also see a sports reference (Ohio State University and, oddly, the Pittsburgh Steelers being the ones I have so far seen most often).  Only once in a while will you find some other sentiment expressed on a barn, as in this example, presumably put there by a Marine Corps veteran. 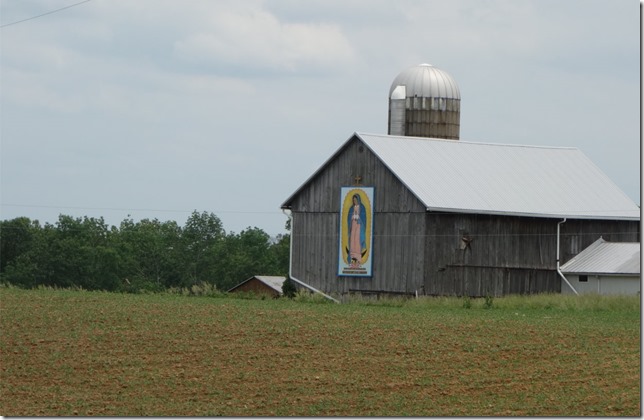 Pretty close to that barn was this barn, with an even more unusual sign on it.  That’s the Virgin Mary up there on that barn.  In letters at the bottom, the sign reads “Our Lady of Guadalupe, Mother of the Unborn.”  The image is a famous image of the “Virgin of Guadalupe,” allegedly seen in Mexico in the 1530s.  This is one of the most important cultural symbols in Mexican history.  Historically, many interpreters of this image believed that its subject is pregnant.  In modern times, this has resulted in an attempt by many people to appropriate and politicize the image as a symbol of the Catholic wing of the anti-abortion movement (which, to judge by the wording on the sign, was the intent here).

At some point in my meanderings I started driving alongside the Muskingum River, a significant tributary of the Ohio River and probably the most important river that goes through Southeast Ohio.  In times past, the river was a significant commercial waterway (and also an Underground Railroad route); today its uses are basically recreational.  As I have noted in earlier entries (see the tag “river shack”), some of Ohio’s rivers are lined with permanent or semi-permanent small housing designed for recreational river purposes:  fishing, boating, or just lying around.  the subject painted on the above striking river shack is managing to do all three. 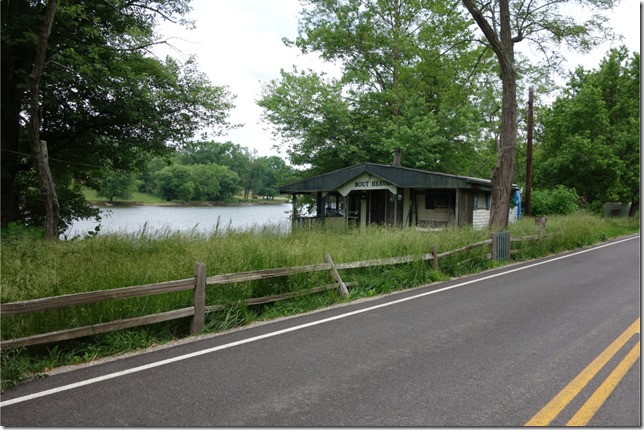 As the title of this shack, “Bout Heaven,” suggests, recreation and relaxing are the key themes here.

The range of time, money and attention put into river shacks is to me amazing.  They can range from elaborate constructions like this elevated building… 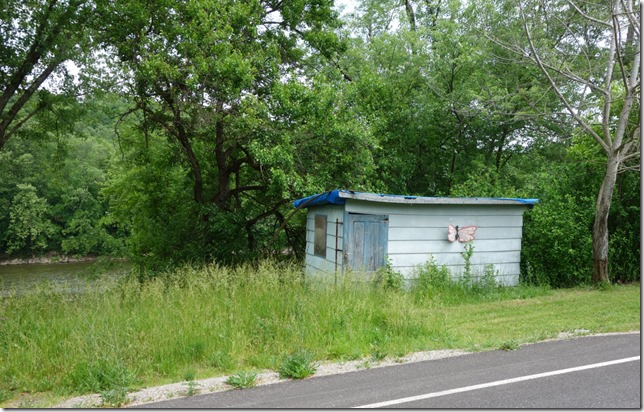 ….to this tiny building much more deserving of the name “shack.”  The butterfly is a nice, homey touch, though. 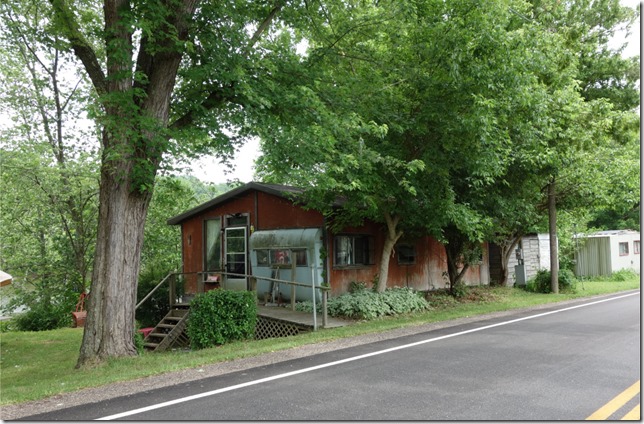 I still am surprised whenever I find this form of architecture, which prior to 2013 I did not even know existed:  the melding of house trailers and conventional house-like structures.  I really don’t know what the rationale is to these—what advantages do they offer?  Clearly, the trailer would have basic appliances and facilities in it, that would not have to be installed in the building otherwise, but that can’t be very cost effective. 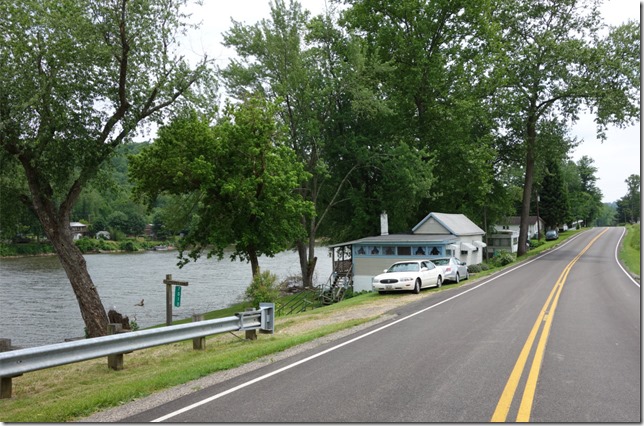 Some river shacks are nice enough that they could be permanent homes, though I think few if any of these are. 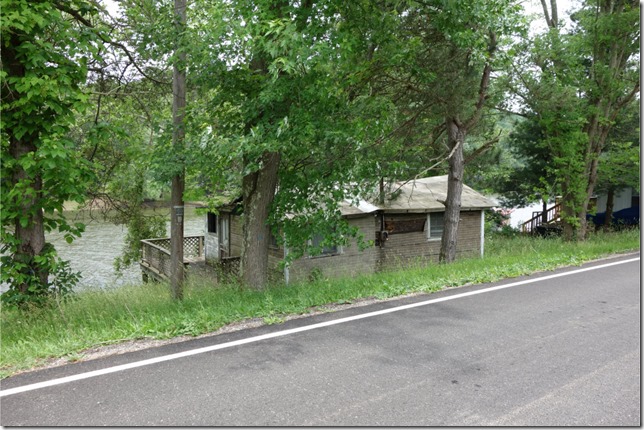 Another thing that is cool about them is that there is no uniformity of structure here.  They are amazingly diverse and varied and you never know what the next one will look like.