I grew up in a military town (El Paso, with massive Fort Bliss, as well as the nearby White Sands Missile Range).  I went to college at another military town—San Antonio, Texas.  It wasn’t until I moved to Columbus, Ohio, with no military presence at all, that I realized how many differences there were.  I grew up with military jets and helicopters overhead so often that it was unremarkable.  Fort Bliss itself is so large that it materially affects the geography of the city, limiting its sprawl to certain directions.  Of course, soldiers were everywhere and, since El Paso is a major location for retired military personnel to settle, former soldiers were also everywhere.   But then Texas as a whole is much more of a military state than Ohio, which really only has one major military base in the whole state (Wright-Patterson Air Force Base).  Ohio’s “non-militariness” is actually exemplified in one of its “bases,” Camp Perry.

Camp Perry, located in northwestern Ohio on the shores of Lake Erie, is an Ohio National Guard facility, built in the early 1900s in the wake of the Spanish-American War (although oddly named for a naval officer from the War of 1812, instead of any soldier).  It serves no real purpose to speak of.   Its only practical function is as a firing range.  Essentially the base could be closed with no real loss to anybody, but it still lives on.  It says something when the most important thing that happens at a military base is a yearly civilian marksmanship contest.

You can immediately tell how irrelevant Camp Perry is, because even in this post 9/11 environment there is no security and you just drive in and wander all over the base. 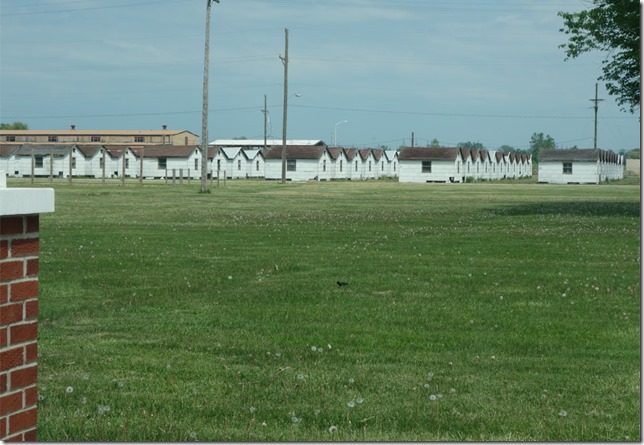 During World War II, Camp Perry briefly had some use, serving as a prisoner of war facility.  Much of this housing still remains, as does various types of lodging built in other eras.  Virtually the entire base is either a firing range or lodging.  Even what looks like the headquarters building is actually a “Lodging and Conference Center.” 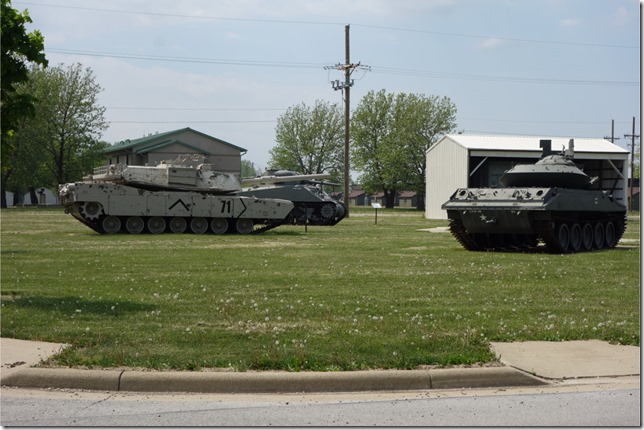 In a couple of spots on the base, military hardware is displayed.  Here a modernish M1 (or M1A1, I can’t tell the difference) Abrams tank is in front of a World War II era Sherman.  I think the tank on the right is a Viet Nam era Sheridan.

It’s fascinating to look at the Abrams and the Sherman in juxtaposition.  The Sherman was the main American battle tank of World War II (and also used extensively by the British and Free French armies, and to a lesser degree by the Soviets).  Tanks at the time were evolving as quickly as computers in the 1980s and 1990s.  By the time the Sherman came out, the tanks that it was designed to fight were already largely obsolete and superseded by better models; the Sherman ended up under-gunned and under-armored (though it did have some other advantages, it was primarily quantity more than quality that made the Sherman successful).

The Abrams, on the other hand, made its debut in the 1980s as the preeminent battle tank of the world and maintained that status over the next 30 years (it continues to be true).  This speaks to the maturity of the technology now, where tank models can remain in service for much longer periods of time.  Of course, the need for main battle tanks is far less today in this era of unconventional and low intensity warfare.

When the Abrams (produced, by the way, in Lima, Ohio) was still in its trial phases in the late 1970s, known as the XM1 at that stage, its  engine had real problems dealing with dust.  That was a problem for a tank more likely to fight in desert battlefields than central Germany.  Engineers trying to fix the problem ran tests at Fort Bliss and my father, who had started an industrial welding contracting business a few years earlier, somehow ended up helping the Army with this testing, making some modifications on the fly, so to speak, out in the desert.  As a thank you, someone gave my father an XM1 belt buckle, which my father gave to me and which I wore until the metal hook on the buckle eventually broke off with age and wear and tear. 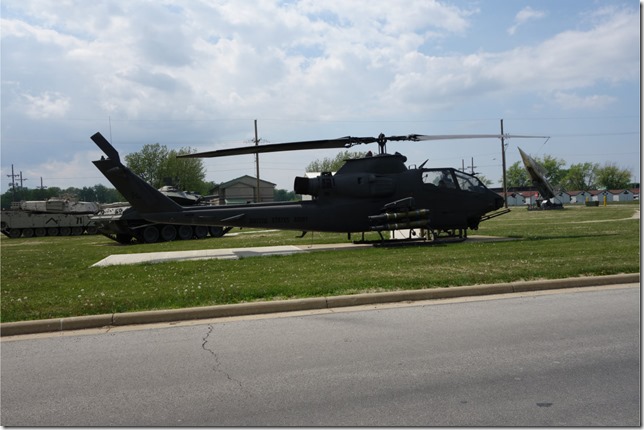 I have no idea what sort of helicopter this is; things that fly have never really interested me.

When I grew up in the West every piddling military installation around seemed to have its loving display of rockets and missiles somewhere on it (of course, I did grow up near a missile range).  I guess missiles were big status symbols during the Cold War. 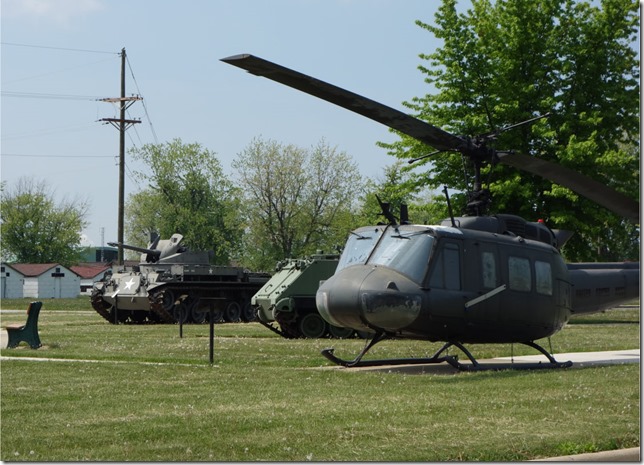 Another flying thingie.  Behind it is a Viet Nam era M113 armored personnel carrier.  The vehicle on the left, which I had to look up, is an M42 “Duster,” a self-propelled anti-aircraft gun built in the 1950s that later served in the Viet Nam war (where it was used against ground targets). 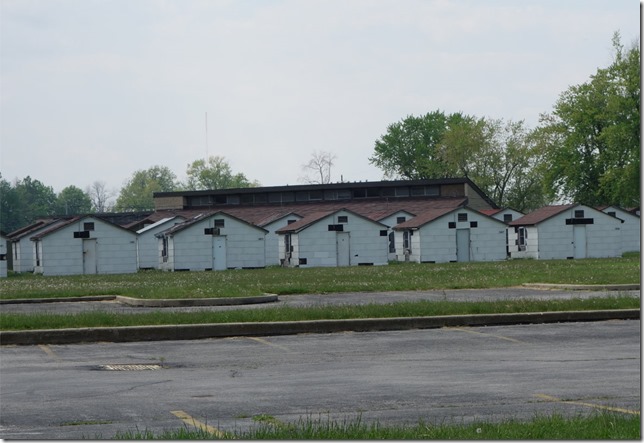 More huts than Jabba can shake a stick at.

This is a Stuart light tank from World War II.  Large and clunky, it wasn’t all that useful against the Germans, but in the Pacific it was a match for Japanese tanks even late in the war.   This particular Stuart, though, was a gift to the base by civilians in honor of Company C of the 192nd Tank Battalion.  The 192nd Tank Battalion was one of two tank battalions sent to the Philippines prior to Pearl Harbor.  The units fought throughout the horrific 1941-42 Filipino-American defense of Luzon and the Bataan Peninsula, then took part in the ensuing Bataan Death March and more than three years of cruel captivity at the hands of the Japanese.

A chapel building, constructed during World War II when there were substantial personnel on the base. 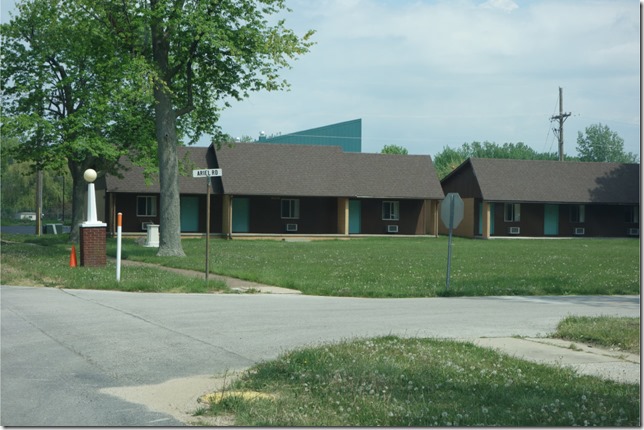 An administration building, with some naval cannons in front of it. 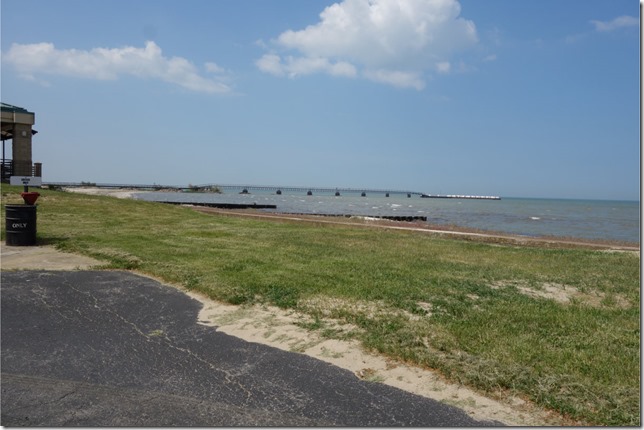 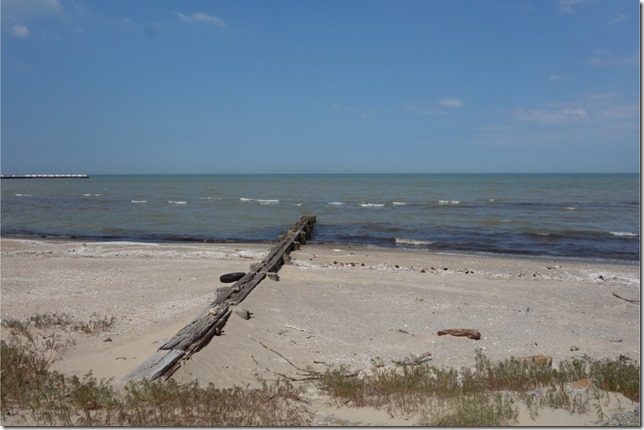 At last!  At Camp Perry I finally was able to stand on the shores of Lake Erie.  Sticking out from the left is the Camp Perry pier (the words Camp Perry are spelled out on its side).

The beach was fairly ugly, but it was a beach and I find shores relaxing.  I would have stuck around for a while and just relaxed but I really had to pee.  Nature called, what can I say.

Next to the base is this house right on the lake; it would be nice to have a place like that.