It’s amazing how very different we can feel depending on whether or not we are going somewhere or returning from somewhere.  The leaving is filled with expectation—hopefully a happy, excited sort of expectation, but we all know we sometimes leave towards destinations we dread.  The return, though, is usually completely different.  Sometimes we are simply anxious to get home and it doesn’t even matter what is around us—we have only that one thought in mind:  GET HOME.  Sometimes we are more relaxed about it and can enjoy the journey, understanding that at its end is the comfort and familiarity of home.  I remember once, when I was in high school, returning home in the darkness from some interminable bus ride from somewhere in west Texas.  I had a Walkman with me and was playing Simon & Garfunkel’s Concert in Central Park.  When the song “Homeward Bound” played, it hit me like a ton of bricks.  As I’ve grown older (and am now pretty close to the half century mark), the song has only become more powerful to me and if I ever hear it while I am coming back from a long trip I get quite melancholic.

[Remember that you can click on any image below for a larger, better version]

By this point in the excursion I was well on my way home and it was quite late in the day (as the visual quality, or lack thereof, of these last photos, will attest).  As I had on my outbound leg, I came across a big flock of turkey vultures, this time resting on a fence.  They immediately took to flight, but I did get this quick “reflex” picture of one of them. 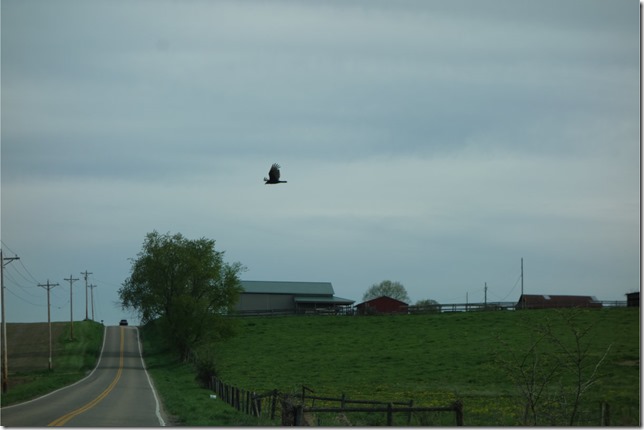 I did stop to take a picture of the quite odd Blue Goose Carry-Out near the hamlet of Warsaw, Ohio. 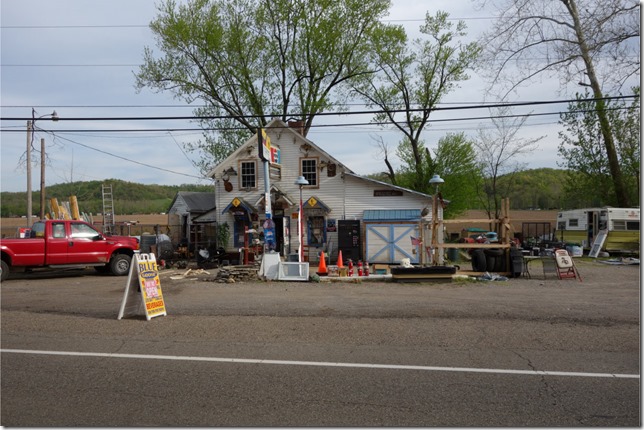 I took this picture not because it was particularly interesting, but because I could encompass within it nearly the entirety of the hamlet of Nellie, Ohio (population 131, salute!).

Here is a ruined house next to a ruined tree.  This clearly looked very different at one point—just imagine the two lines of trees flanking the sidewalk leading up to the front door.

Here’s a very beat up (it even has a hole knocked in the wall) but seemingly still occupied residence.  This is near Newcastle, Ohio, I think. 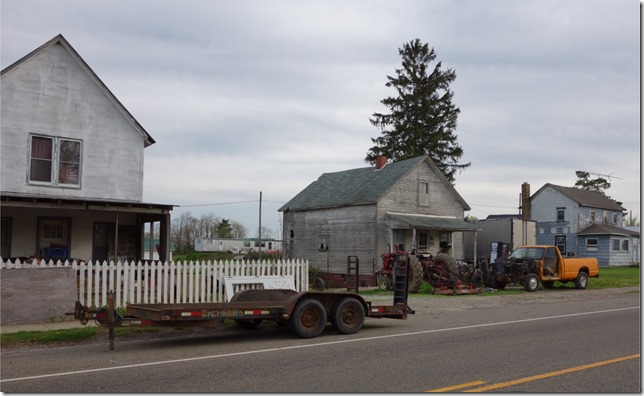 Once this was a thriving gas station, but the days of this type of gas station are long since gone.

Here’s an Amish house, built in a common Amish style.  Out of frame is a buggy “garage.”

And from the calm quiet of the Amish, we move directly to….this.  Already in this excursion we encountered “white power” vandalism; now we come across a more-than-ardent Birther conspiracy theorist who just has to share his views with every passer-by.  The desire of so many people to wear their beliefs on their sleeve is just beyond me.  I have never had the urge to put a campaign bumper sticker on my car, much less something like this.  It is also true that often the people who most want to shout their opinions are the ones with the unsoundest of beliefs—as in this case.

Can you picture this person in his garage, constructing these signs?  I can imagine him cackling as he thinks of how many people will be converted by the “truths” he would have them encounter. 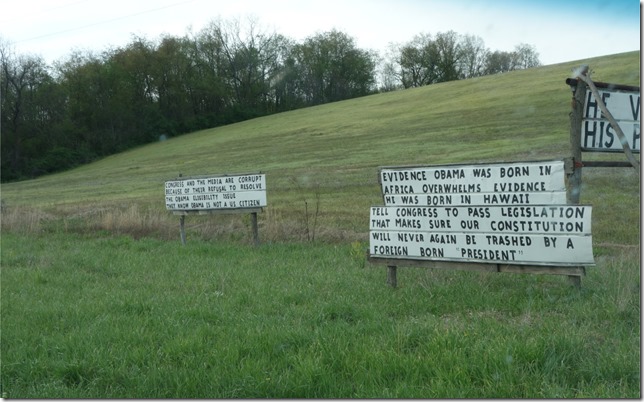 I have to laugh at this peculiarly Ohioan take on the Birther conspiracy—“Tressel” is former Ohio State University football coach Jim Tressel, who was fired following a significant scandal (which would shortly be overwhelmed by the even larger Penn State football scandal). 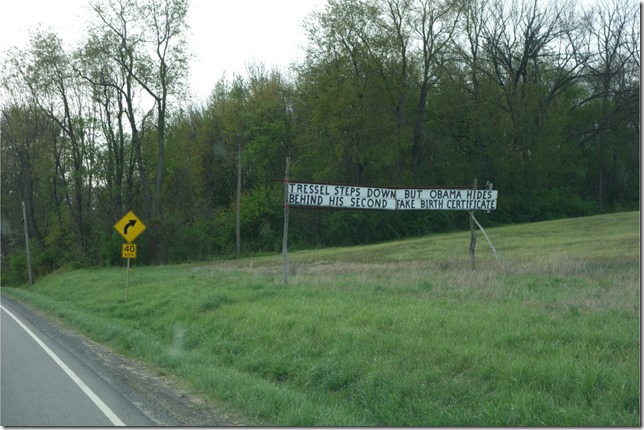 Here’s a very solid looking old building in Mount Vernon, Ohio.  Mount Vernon (population 16,990, salute!) is a nice little town two counties northeast of Columbus.  Its motto is “One of Ohio’s Most Likable Communities,” and you can see why from that motto alone:  they didn’t call themselves “Ohio’s Most Likable Community,” they just wanted to be a little part of the in-crowd.  Mount Vernon is one of the relatively few small towns in Ohio that has shown consistent growth.

It has a nice Civil War memorial in the middle of town, but there was too much traffic for me to get a good picture of it.  I will come back some other time.

Here we are getting closer to Columbus.  I believe this barn appears along U.S. 36/S.R. 3.  Once again we have someone from the fringes bound and determined to share his ideology with us.  Alas for him, but perhaps just as well for the rest of us, he will be doomed to disappointment. 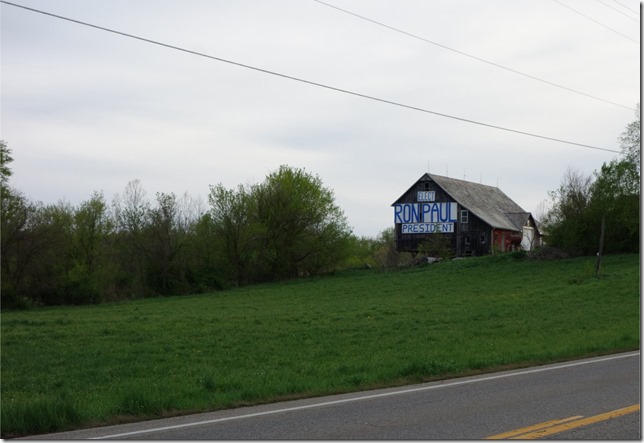 Here we have a shot of downtown Centerburg, a small village (population 1,861, salute!) a spit and a grin northeast of Columbus. 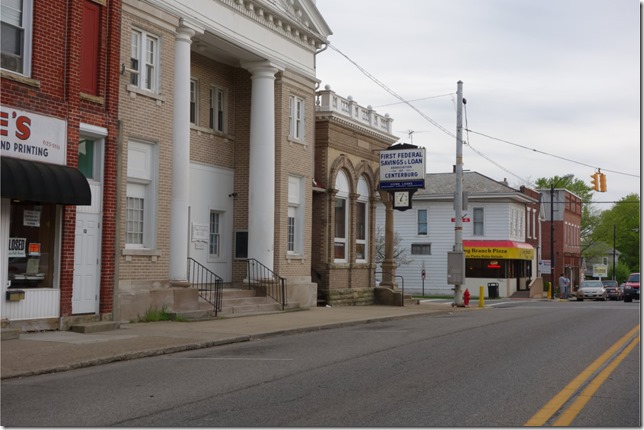 One happy establishment in Centerburg is the Twist-n-Shake, an ice cream shack.

I thought I’d throw these twilight shots in at the end, but they actually go back to the first sentence of this blog entry about the world always being changing.  These are shots from a strip mall in north Columbus.  You can see from the various business names that most are designed to appeal to an immigrant Muslim population.   The Columbus area has a fairly large Muslim population, the majority of whom are recent immigrants (largely Somalis who fled the civil war in their home country).  Many young Muslims are attracted to Ohio State University, a major university, and live in one or another of the neighborhoods or inburbs that surround the university.  A number of adult professional Muslims live in the suburb of Hilliard,  Various black Muslims live in many places in the city.  But the bulk of the Muslim population in Columbus is Somali and many of them live in north Central Columbus, either in the Linden neighborhood or north of it.  For new Somali refugees, this was one of relatively few areas in which they could afford to live.  With the growth of this population, businesses have risen to support it, as in these examples.  None of these businesses existed when I moved to Columbus, a quarter century ago.  Another example of these demographic changes is the growing number of grocery and other stores aimed at a Mexican immigrant population.  I was quite familiar with that, having lived in El Paso and San Antonio, but for all practical purposes, there was no Mexican immigrant community in Columbus when I first moved here.  Now there is!  This is the sort of thing that gets xenophobes all upset, but such things actually enrich communities. 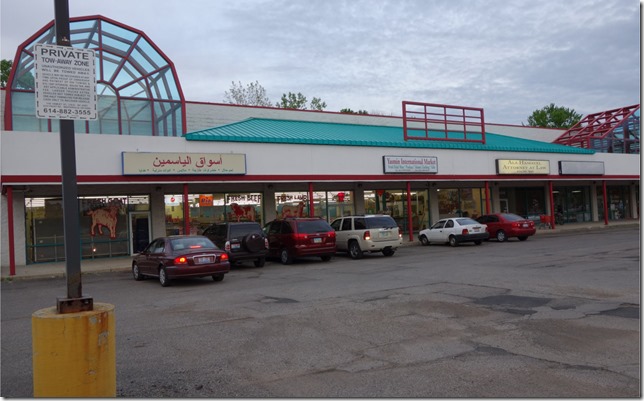