Excursion 5, Part 3 (We are time’s subjects, and time bids be gone)

In which our intrepid hero literally discovers the Theory of Everything…

One of the odd things about dilapidated or ruined buildings is how they juxtapose with the seasons.  If you look at a ruined building in the winter, the landscape surrounding it is as grey and colorless as the building itself; lifelessness upon lifelessness.  However, if you come across the same building in the summer (in Ohio), you will instead see a picture of contrasts:  a gray, lifeless shambles of a building surrounded by vibrant greenery.  Indeed, it may not even be surrounded but invaded by such greenery.  In this case, lifelessness confronts life itself.

[Remember that you can click on the pictures below to see larger, better versions]

As I continued my journey south towards Portsmouth, I kept coming across examples of what I described above:  islands of ruin surrounded by seas of green.   Here is one example, seemingly destroyed by fire. 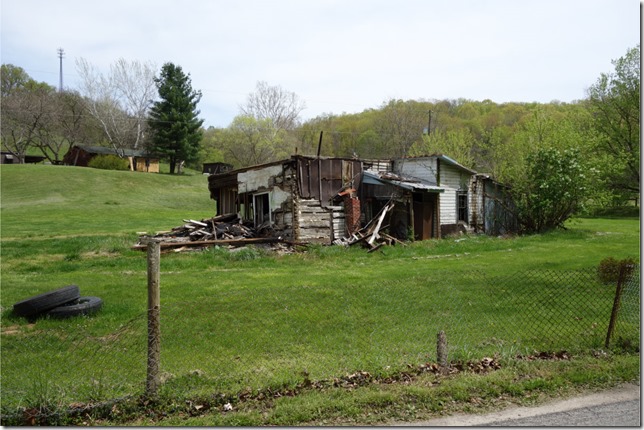 Even houses that were still inhabitated at times seemed to be in the process of being consumed by the vegetation. 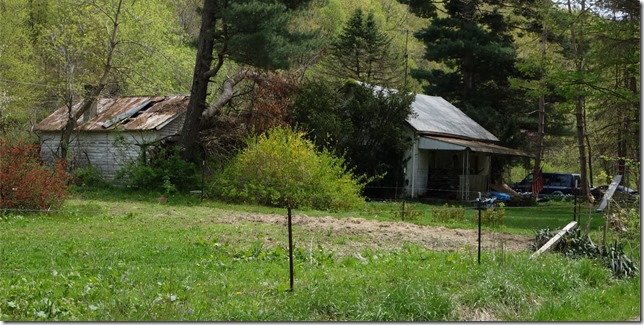 Ohio is dotted with buildings like this—no current purpose and their original one a mystery.

I will say two things about this picture.  First, it was interesting to see a single gravestone resting on this hill.  I took the picture so that the stone was framed by the Yucca-like plants.  I am not sure that they are actually a variety of Yucca—there are several similar-looking plants in Ohio—but when I first moved to Ohio I was quite surprised to see Yucca and Yucca-like plants all over the place, as I had so closely associated them with the southwestern desert where I grew up.

The below images are the second time I’ve come across a worn American flag attached to a ramshackle shed.

Why buildings become abandoned ruins is always a source of interest and mystery to me.  In some cases, the reason is obvious, such as when you see a newer building, clearly a replacement, built nearby.  Less obvious but not uncommon are when small farmsteads are bought and added to larger farm properties.  There is no need for an additional house, so it is allowed to fall into ruin.  In some cases, fire, flood, or other damage clearly played some sort of role in the abandonment of a building.  But for many buildings, there is no clear reason at all why the house may be abandoned and in ruins. 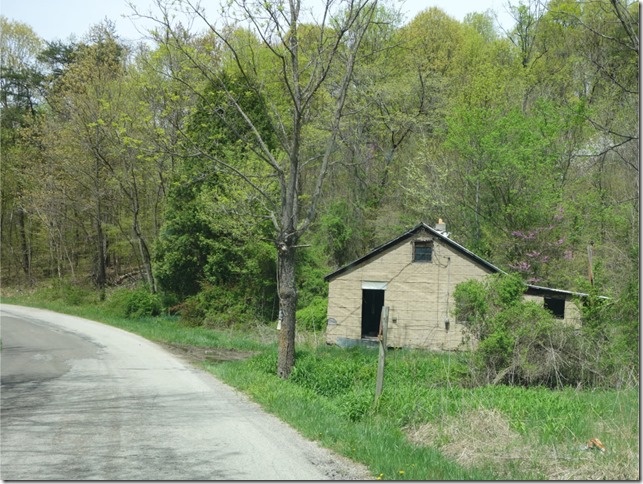 Ruined mobile homes tend to look the same, but this one had a splash of color, plus it was surrounded by trees in bloom.

Sights like these are not uncommon in rural Ohio, at least in the less prosperous areas.  Here you may have several families, possibly related, living on the same plot of land.  Nothing seems particularly well kept up.

This building probably looked quite nice at one point, but nature is reclaiming it.

Even more so does this old car seem to be in the process of being swallowed by the foliage.

I can’t let an excursion go by without pictures of ice cream shacks.  Here is Sister’s Dairy Bar in Portsmouth, Ohio. 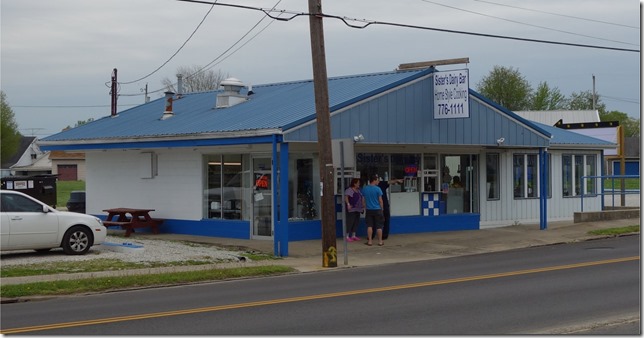 Portsmouth, Ohio, is on the banks of the Ohio River in far southern Ohio (it is one of Ohio’s three southernmost counties).  It was an early settlement in Ohio.  Within a century, its position on the Ohio River made it a significant manufacturing center, especially for shoes, bricks and steel.  Today, of course, things are much different and most manufacturing has left the area.  Portsmouth’s population peaked in 1930 at slightly over 42,000, but today the population is less than half that.  The per capita income is only around $15,000 (in contrast, the more prosperous Delaware, Ohio, has a PCI of over $20,000).

Below is Russ & David’s General Store.  It looks like it sells knickknacks and junk; if you look carefully, though, you’ll see a security camera on the top of the building, so maybe those are some valuable baskets.  With a name like that, I can’t help having a mental image of two gay guys deciding to open a little store together.  That will probably generate an angry e-mail from an aggressively hetero Russ or David.

Here’s another ice cream shack, the Shake Shoppe.  It turns out that there are numerous different places called “Shake Shoppe” in Ohio, but this is the one in Portsmouth. 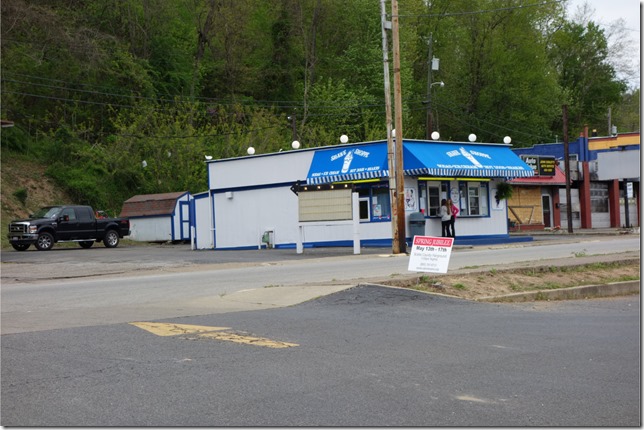 I saw this bakery while stopped at an intersection and had to zoom in and take this too-quick picture.  I honestly don’t know why I didn’t drive over to it to get a good shot.  I think I was already in “heading home” mode by this time.

And, on the way back, up U.S. 23 back to Columbus, I discovered that UFO enthusiast Mike Brumfield wants to share with us his theory of everything.   I don’t know what the theory is, but Brumfield assures us that the first clue is “think infinitely.”  He’s worth a google search.