In which our intrepid hero encounters a mystery building…

One of the saddest things about life is that we can never re-live things we experience.  Do you remember a time when you were deep in the throes of a new love—how that person made you think, how it made you feel?   Do you remember the first time you saw your favorite movie and how it made you feel?   You can’t get those feelings back; you can only vaguely remember and appreciate what it was like to have them.  It’s a less illegal version of that first hit of heroin—even if you married that person you fell in love with and have been happily with that person for decades, you don’t physically feel the same way about them.  Literally, the chemistry is different.  And you can watch that movie again, but you won’t be scared or amused or moved to the same extent that were the first time.  The movie has worn grooves in your brain now; it is no longer as fresh.  You can’t get that “first time” back.

[Remember that you can click on the pictures below for larger, better versions]

I’ve experienced that a number of times in my life, because I have the sort of personality that just leaps into things headfirst.  So, for example, in 2001, when I really began playing the board wargame Advanced Squad Leader, I couldn’t play it enough, I couldn’t get enough ASL stuff fast enough, I couldn’t wait to do all the things one can do with it.  After a while, the intense passion wore off and it simply became a hobby I very much enjoy.

I am experiencing that feeling right now, as of this writing, since I first decided to turn my interest in back-country Ohio into a more dedicated activity.  I find that, during the week, my mind wanders towards the weekend, when I will have the luxury to take another drive somewhere.  Isn’t that odd?  That I would so much anticipate the mere act of driving somewhere I have not been before?  Maybe it activates some hidden “explorer” gene that I have.  I am getting some of that feeling too with regard to the photography, but here I have to be careful.  Photography is a hobby in which one can spend an unlimited amount of money and I already have two very expensive hobbies (wargames and books).  I can’t afford another pastime so expensive, so now that I have bought two cameras (my original Sony RX100 and a newer Canon SX50 for its 50x zoom) and various items of camera gear (window mounts, ballheads, photography books, etc.), I will have to clamp down on that aspect of things.  But simply driving around really just costs time and gas and it turns out I can do that.

I know that this phase will pass and the intensity will die down—hopefully not to the point of burnout, which is always a risk (the flame that burns twice as bright burns half as long).  But I definitely appreciate the feeling while it lasts.

My fifth excursion was pretty straightforward—to head down to southern Ohio, with the notion of going vaguely down towards Portsmouth.  So I left Columbus going south, first down U.S. 23, then off on smaller roads that more or less paralleled that more travelled road.

As I passed through downtown Columbus (heading south on U.S. 23, which is High Street in Columbus), I was stopped at a light so I decided to take this picture of a quiet Saturday morning downtown Columbus.

South of downtown, I happened to catch this dilapidated and abandoned building out of the corner of my eye and, on a whim, decided to stop and shoot it.  Columbus has many such buildings like this, some divided up into small apartments (I lived for two years in one pest-infested such building near campus). 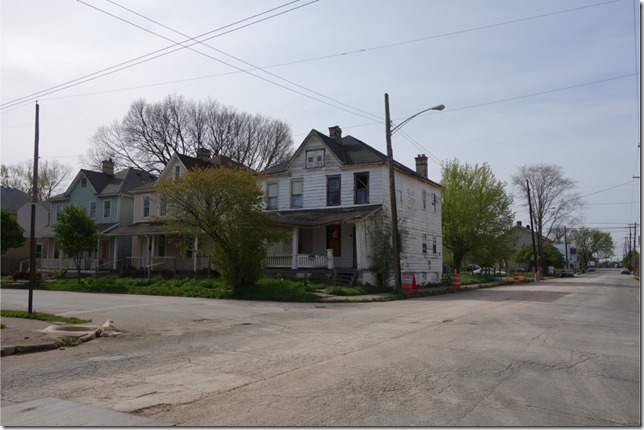 A more prominent feature off of High Street south of downtown is a large cluster of old buildings that used to be part of a foundry.  Today, the foundry is called Columbus Castings, which bills itself as “the largest single site steel foundry in North America,” making steel castings for railroad cars, mining equipment and more.  The company began in the 1880s as the Murray-Hayden Foundry but went through many name changes and transformations over the next century or so—including at one point the Buckeye Steel Castings Company (see photograph below) in the early 1900s.  At this point, Prescott Bush (ancestor of the two presidents) was President.  Now, Columbus Castings bills itself as a “pro-employee,” “union free” establishment, though those two labels are in direct contradiction to each other.

I believe that these particular buildings are no longer part of the foundry but at one point were sold off and now belong to a delivery/trucking company. 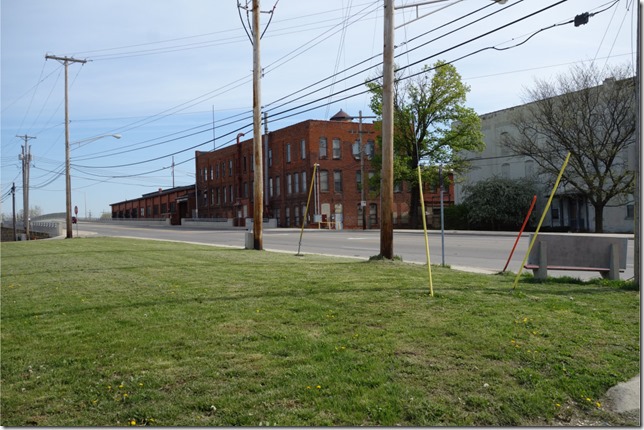 Heading south on a narrow country road in Ohio.  A small abandoned barn is ahead.

When you take photographs from cars you are largely limited to shooting from the driver’s side front window.  But driving south in the morning will make many of your targets backlit, as I discovered that morning.   This shot is slightly backlit, but I don’t mind so much because with this particular shot I was not trying for an attractive photograph so much as to document something in order to complain about it here.

What do I want to complain about?  The below house is one of the somewhat less egregious examples of what I would describe as the rise of rural McMansions in Ohio (and, I presume, elsewhere).  A McMansion is basically a large, multi-story house designed as much to be an example of conspicuous consumption as a place to live.  Often ostentatious (and sometimes ostentatiously ugly), they are typically far larger than the needs of the relatively small family that typically lives in them.  McMansions arose largely as a suburban phenomenon but they have spread to the countryside, where they jar with the surrounding environment and surrounding architecture.  The people who live in them are more often than not commuters to a large town or city, rather than farmers or people who make their living nearby, which is one reason why such rural McMansions tend to be most prominent within a certain radius of cities and towns (as in this example, which is near Columbus).

Ugly, arrogant and unpleasant, McMansions are a real blight on the countryside.  The below example is relatively benign compared to some that I have seen.  Occasionally I will take pictures of rural McMansions, primarily to give me a chance to express my displeasure about this unwelcome phenomenon. 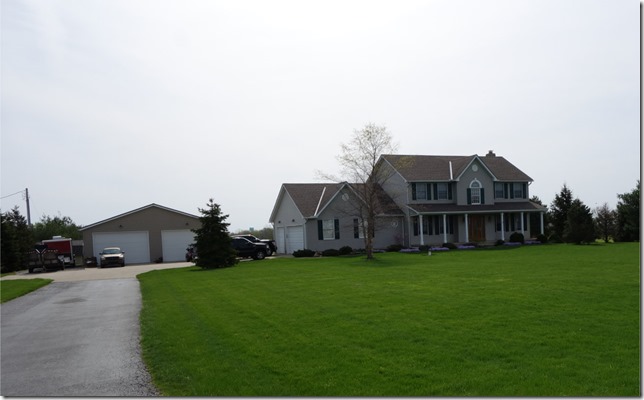 Every now and then, you encounter some small abandoned building whose purpose is entirely inexplicable.  This small outbuilding is an example of such a building.  It just doesn’t seem like it was intended to be a home, yet it has a chimney, so involved some sort of human accommodation/inhabitation.  It’s just a little puzzle.

One crude way to judge the past prosperity of a farm is to look at the number of outbuildings and facilities it has.   Some farms have little more than a single large shed or barn for equipment, while others host an array of buildings for equipment, livestock, storage of various types, and more.  This cluster of buildings is all part of a single farm.

Down this little driveway is a more modest farm, with a smaller house and no big cluster of outbuildings.  Note too how flat southern-central Ohio is here, quite unlike the hilly terrain of eastern and southeastern Ohio seen in some of the previous excursions.

In such regions, when there is a rise in the terrain, people will often take advantage of it, as in this example, where the house was built on the tiny rise in terrain (too modest to be called a hill) in the middle of the farm.

This (sadly backlit) building is a bit of a mystery for me—perhaps some reader will help me solve it.  I have seen several such buildings in different places in rural Ohio, distinguished by the signs over the doorway.  The sign in this particular example  reads “DUNGAN Dist. No. 4, WAYNE Tp. 1893.”   “Townships” are an odd artifact in Ohio of the Northwest Territory; the whole state is divided into townships (they do not represent towns), which in some places continue to have some sort of governmental authority.  Some townships have their own police departments (some of which do nothing but operate speed traps), but the most common function seems to be operating fire departments.  My suspicion is that this building is an old fire department building.  The Dungans are a family that lived in the area at the time and there are roads and cemeteries that bear their name. 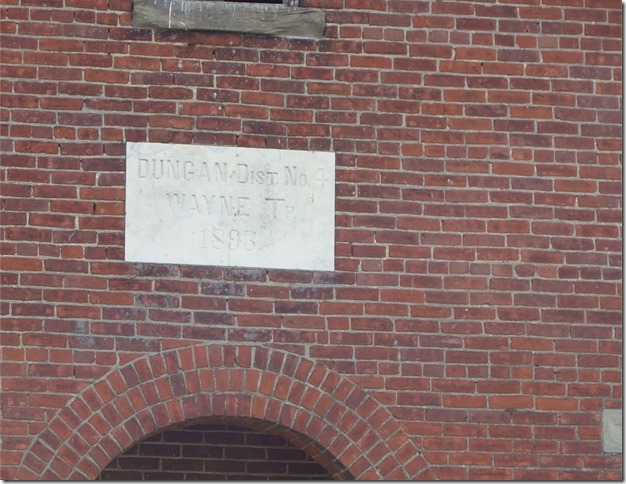 I like it when buildings have signs on them that provide information like dates.   This old, abandoned church identifies itself as the “Union Chapel M.E. Church,” built in 1828 and rebuilt in 1879.  The M.E. stands for “Methodist Episcopal.”  This was a small church in Ross County at “Andersonville,” which is not even really a hamlet, just a couple of buildings.