Excursion 3, Part 2 (I am Ozymandias, King of Kings)

In which our intrepid hero encounters a triumphantly twisted ruin…

There is something about things that are old, ungainly and decaying that fascinate me.  I’ve always been that way.  This is why I exult in the glorious truck-hulks that appear in the much underrated 1977 film Sorceror, for example, and one of the reasons I like movies that depict slums, ghettoes, or old buildings.  These sorts of things have always resonated very deeply with me—this notion of things that once were strong or great but are so no longer.

Percy Bysshe Shelley had it dead-on with his sonnet “Ozymandias”:

I met a traveller from an antique land
Who said: Two vast and trunkless legs of stone
Stand in the desert. Near them, on the sand,
Half sunk, a shattered visage lies, whose frown,
And wrinkled lip, and sneer of cold command,
Tell that its sculptor well those passions read
Which yet survive, stamped on these lifeless things,
The hand that mocked them and the heart that fed:
And on the pedestal these words appear:
“My name is Ozymandias, king of kings:
Look on my works, ye Mighty, and despair!”
Nothing beside remains. Round the decay
Of that colossal wreck, boundless and bare
The lone and level sands stretch far away

[Please note that you can click on all of the photographs below to see larger, better versions]

One of the mightiest things in the Midwest that no longer exists, at least as it was, is the Great Midwestern Forest.   At one time, most of the midwest was covered by a single mighty forest, a woods as black and dense as it was broad.  As the saying went, a squirrel could travel tree to tree for hundreds of miles without ever having to touch the ground.  Those days are long gone for most of the Midwest, which has been farm country for many years.  Ohio no longer has any great contiguous forests.  In fact, by the 1920s, most of southeastern Ohio, the region for my third excursion, was largely deforested, between logging and farming.  However, around mid-century, the situation began to improve.  A combination of rural populations moving to cities and better agricultural techniques meant that low-quality farmland could be abandoned to reforestation.  Meanwhile, logging became less destructive and more sustainable.  The result has been a near-miraculous recovery of Ohio’s forests, though the Great Midwestern Forest will never reappear.

Logging is quite common in southeastern Ohio and its traces are frequently found.

It might not be too easy to understand what the below image actually is.  It’s a mailbox (in the form of a house), with a tree stump for a stand.

Growing up in West Texas, you learned to do certain things.  For example, in that desert country, whenever you were on a road that went over a bridge, even a tiny one, you’d look down to see if any water happened to be under whatever bridge it was.  You did that because usually there wasn’t any water in the arroyo or dry stream bed.  On those rare occasions when you saw a trickle, you’d shout, “Look, there’s water!”  I have lived in Ohio for 25 years now and I still look down to see if there is water.  But for 25 years, there has ALWAYS been water.  I still do it; old habits are hard to break.

At one time, this must have been a nice equipment garage. 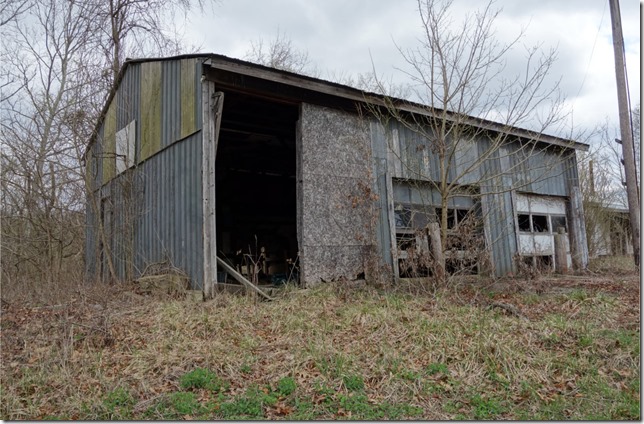 Another thing I may never get entirely used to about Ohio is how green it is compared to west Texas.  Even in this photo, still in early spring, the landscape is already greener than it will ever be anywhere in El Paso other than a golf course.

I particularly like the building in the above photograph; see below for a close-up.  I love it because of the clear multi-generational way in which it was constructed.  This particular style, by the way, is common in Ohio (we’ll see other examples in subsequent posts):  a square or rectangular building up front (often thin, almost like an upright domino), with various additions of decreasing heights stretching towards the back.  Often the very last building is a garage.  Some of these buildings seem constructed in this fashion all at once, while others have the appearance of having been accreted over time.

Here’s a nice landscape shot, if I do say so myself.  I like the rare patch of sunshine illuminating the fields in the background, and I like the way the tree and the horizon divide the picture into quarters.  It is a nice pastoral scene. 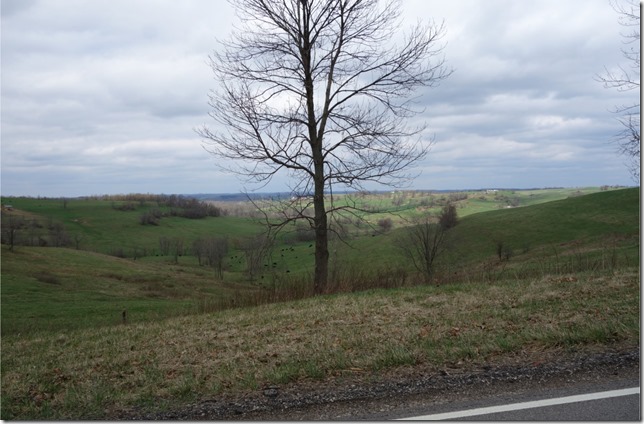 For the animal lovers, here is a close up of the cattle.

Of the many ruins I have taken photographs of these past few months, this is one of my absolute favorites.  I think what I like the most about it is its twisted funhouse-mirror appearance.  It is a building that has not simply decayed—somehow time has literally distorted it.  I think this was a great time of year to take this picture, too, because the not-yet-green trees and vines give the building a particularly stark appearance. 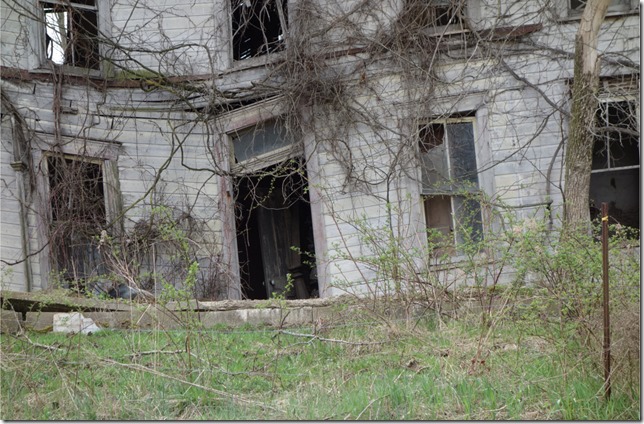 Across the country road from that building was the foundation of a building that is completely gone.  I have no idea what it was, but suspect it might have been some sort of a equipment garage (based on its construction material).