In which our intrepid hero discovers an intriguing and mysterious urn…

When some people drive alone for a distance, they are able somehow to tune themselves out.  Perhaps they immerse themselves in music from the radio, or CDs or MP3s.  Maybe they just focus on the road.  Sometimes I am able to do that, especially if I am weary, or if the traffic or weather is such that I really need to concentrate.  But all too often I am very conscious that I am with myself.  My thoughts roam far and wide.  This is a bad thing if you are depressed or if something unhappy just happened; your mind gets stuck in a loop and you endlessly replay conversations or are simply unable to get away from fears and anxieties.  But if you don’t have those monsters lurking inside you that day, your mind can instead be a “happy place,” where you can absorb and process what you see in a mindset of peace and serenity.  You can almost feel the dopamine kicking in when you get into such a contemplative, almost meditative mood.  When this happens, I find it more than relaxing; it is almost as if my cares are falling away from me as I speed down the road…

[Please remember that you can click on all of these pictures to see a bigger, better version of them]

As I continued my drive, I saw a sign on the property of an otherwise ordinary farmhouse that caught the corner of my eye.  I stopped, then backed up to take a look at it.  I thought at first that it might be a political statement of some sort, but it turned out to be something completely different.  It is actually a notice, warning people that “this property is an agricultural district.  At times dust, noises, spraying, insects and odors occur due to normal farming activities.  Anyone interested in locating near this property should take its current use into consideration.”

This made me very curious.  At this particular time, there were no noises or odors at all, and I wondered what prompted the person to erect this sign—which he did not create himself, as can be seen from the Farm Bureau emblem at the bottom.  Had some previous neighbor launched complaints?  Did he think he was insulating himself against a lawsuit?  It was curious to me because in all my driving in rural Ohio, this was the first time I had seen this particular sign (although apparently I am not the only one to see such a sign).  (Note, 10/20/2013:  in the past six months I have seen a few more examples of this sign) 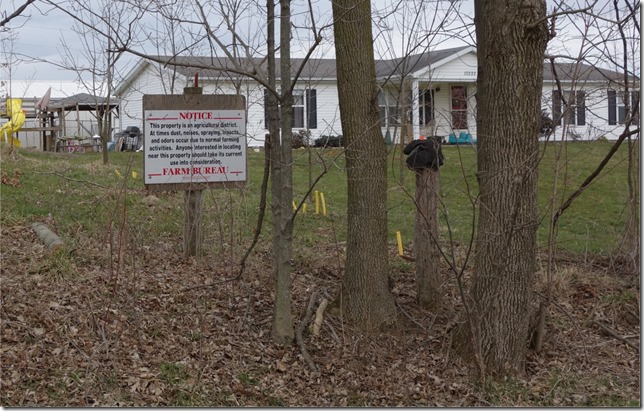 I have included an obligatory landscape photograph below, though I confess it is not particularly interesting.  Fields have not yet been ploughed, the grass is not really green yet.  Still, it is quite representative of the countryside through which I was driving.  That is, with one exception—it shows a pretty flat terrain, when most of the area I was driving through was a bit more rolling.  Ohio has an interesting topography that is pretty much divided by I-71, the major highway that runs northeastern Ohio all the way to southwestern Ohio, linking Cleveland, Columbus, and Cincinnati, the three major cities of Ohio.  West of I-71, Ohio tends to be quite flat (with exceptions here and there, of course).  East of I-71, Ohio quickly becomes rolling, then hilly, which increases the further east one goes until in far eastern Ohio, along the Ohio River, Ohio almost has some low mountains (almost).

Here’s another roadview shot, taken while I was approaching a small village.  In the flatter areas of Ohio, you can often tell when you are getting near a town or village because you can spot a water tower peeking above the tree-line (as here).  In the heavily agricultural areas, another sign of approaching a town is spotting a grain elevator.  The deep blue of the sky in this photograph is not natural—it is mostly an artifact of the tint on my windshield.  In later photographs, I have tried to position the camera in order to avoid capturing it. 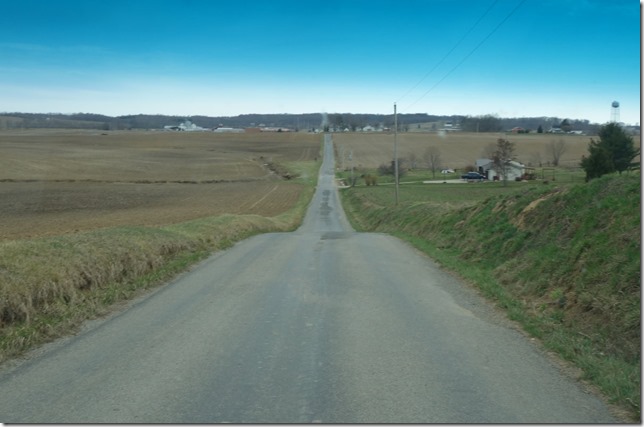 For some reason, when following a country road around a bend, this tree really took my fancy.  I think it was the gnarled nature of the tree combined with the fact that it was all alone, in front of a backdrop of large flat fields.  I ended up taking a number of pictures of it.  I wanted to have one photo with the background defocused, but my Sony RX100 either didn’t have a low enough f-number or I was doing it wrong (the latter is more likely).

This is a stately old ruin alongside a farm road.  the building is large and rather impressive; I wondered if perhaps it had started out as a country schoolhouse but nothing really backed that up.  A half-mile or so down the road, I came across a guy working outside and I stopped and asked him about the building and whether or not it had ever been a school.  He didn’t think it had been a school, but he had only lived in the area a year or so, so he didn’t really know much about it.  He kept talking after imparting this information and that was when I realized I had been trapped.  This guy liked to talk and without ever pausing for breath he began telling me about the property he wanted to buy in southern Ohio and how he would let his daughter build a house on it and much much more, all of it unasked for.  I was stopped right in the middle of the road and several times cars came up behind me, which I tried to use as an excuse for ending our encounter, but he would simply ignore my verbal cues and blithely wave the cars on around us.  I am a bit surprised I am not still there talking to him right now.

My essentially random meandering eventually led me to the tiny village of Somerset, Ohio (population 1,481, salute!).  As is extremely common with older villages and towns in Ohio, the center of town is a circle with a monument in it.  Somerset’s circle, below, has a statue memorializing one of the village’s only famous sons, the Civil War general Philip Sheridan.  Although born in New York, Sheridan grew up in Somerset.  His statue is, according to Wikipedia, “Ohio’s only equestrian Civil War statue.”  Well, there you go.  You didn’t know that fact when you woke up this morning, did you?

I almost felt like  a real photographer when I took this picture.  Look at me, capturing a reflection and all! 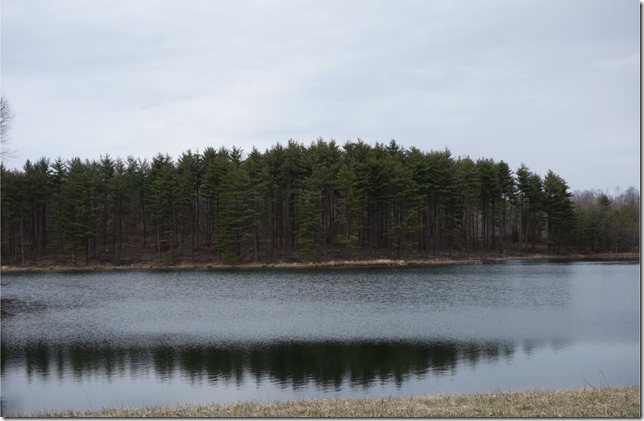 Now back to the reality of my photographs.  This is just another Ohio landscape, although with its low hilly terrain, much more representative of southeast central Ohio.

I was driving through a tiny hamlet when I saw this condemned building.  I am afraid I don’t remember which place it was.  Now I have developed a strategy of taking pictures of my navigation system when I am in a location, to help me remember where I took pictures, but I hadn’t thought of it this early in my travels. 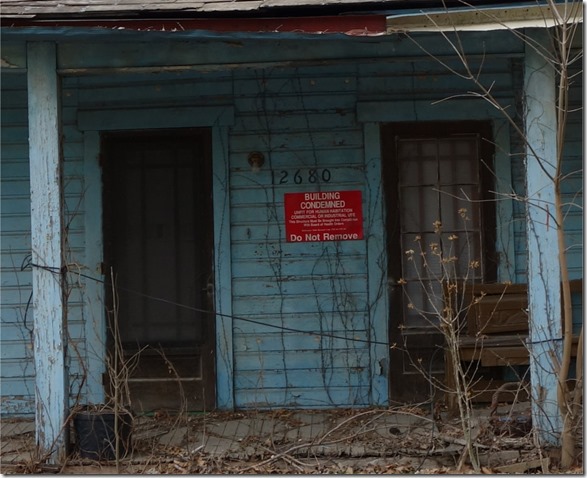 Now we come to the mystery vase.  Ah, sweet mystery of vase, at last I’ve found you.  The unusual picture below, depicting a large painted urn and an even larger piece of unknown industrial equipment, was taken on a side street of the tiny town of Crooksville, Ohio (population 2,534, salute!).   One of the longer streets of Crooksville was a street called China, which I thought was very odd—it is just not a name you see in these small towns.  I assumed it was referring to the country, but I was wrong.   When I got back home, I looked the town up and discovered that Crooksville was the home of Hull Pottery, a noted pottery company.  Thus I assumed that this big-ass urn had something to do with pottery in Crooksville.  I had never seen an urn like that before.

However, I think that cannot be the case.  As of this writing, I have spotted similar urns twice since I found my first one (to be shown in later blog entries), both in eastern or southeastern Ohio.  So is this a “thing”?  If there is anybody who can shed light on these mystery urns for me, please let me know. 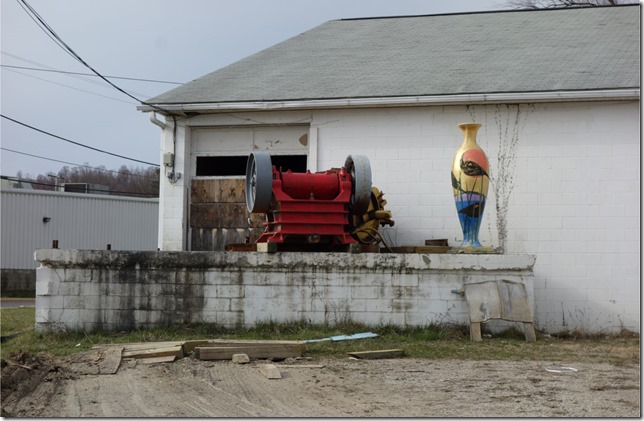 Here’s an interesting picture of a collapsing log cabin.  I don’t really see structures like this very often and it was quite small, so I don’t know if this was built for human habitation or as some sort of farm outbuilding.

The below photo will probably demonstrate my ignorance more than anything else.  Driving down one country road, I passed a collection of long poles (they don’t look high in the photograph because there is a rise of ground between them and the camera, but they are well over person-height) that were festooned with equipment of one kind or another.  Initially, I thought it was some sort of weird meteorological station, but eventually it dawned on me that these were birdhouses and that someone really really wanted birds around.  It was a lot of birdhouses.  Since this photo was taken, I have seen some other places like this, just loaded with birdhouses like these.  This has made me curious:  do the birds serve a utilitarian function (gobbling insects that might damage crops, for example) or are these set-ups purely out of a passion for birds?

I will close out this excursion with images of a dilapidated house that caught my fancy, mostly for all the porch clutter.  This is not uncommon; it is almost as if, when a house is full to the rafters with stuff, it begins to extrude some of itself out onto the porch, almost like a hernia. 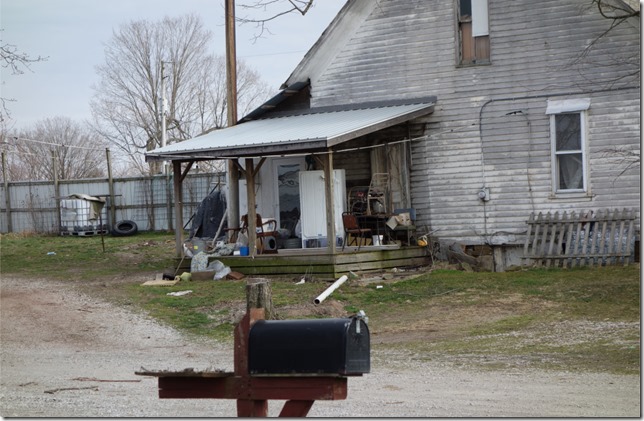 The other side of the house has a warning sign on it, cautioning people against smoking and stating that oxygen is in use.  I have not seen a sign like this before.