We don’t always take the time to appreciate the little things in life.  For example, at the moment of this writing, I have a gnat/fruit fly infestation in my house. I don’t know where the little buggers are reproducing yet and I am probably going to have to tear my house upside down.  I normally don’t take the time to appreciate a gnat-free house.   I do appreciate the relaxation of going on my little excursions across Ohio, but often not until I am actually on the road.  What I dread, to be honest, is having to wake up so early. I am such a night person, that getting up early enough to catch even the trailing rays of the morning’s “golden hour” is certainly a chore. One saving grace of excursions in the winter is that the sun, at least, rises a bit later.  I need those minutes.

The excursion shown here—well, at least the first half of it is shown here—took place on November 14, 2015—took place on a bright, sunny and brisk day (the temperature was in the 40s most of the day).  I decided to head southeast and almost did so by the bird flies, meandering to the south and east until eventually I reached the Ohio River.  Though I probably cursed my alarm clock, I was grateful to be able to get on the road.

Heading southeast from Columbus will take you straight into Appalachia, but there’s a belt of flat central Ohio farmland you must cross until the topography starts to change.  This photograph, of a now-defunct one-room schoolhouse from a century ago, was taken just a bit east of the outlying Columbus suburbs of Pickerington and Canal Winchester. 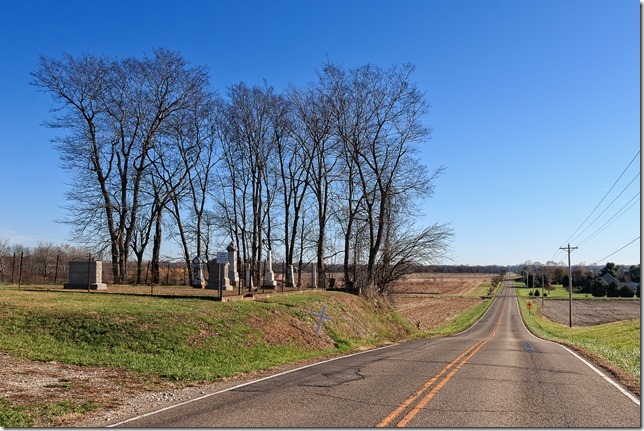 This shot, looking down from a low rolling hill, illustrates that the countryside is still mostly flat. 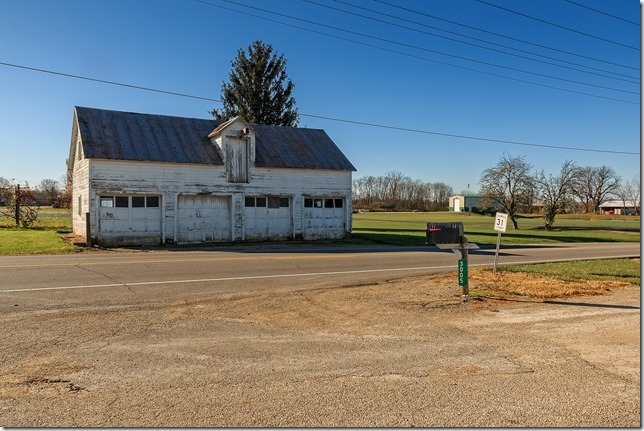 This photograph—taken on “Coonpath Road” northeast of Lancaster, Ohio, shows a type of mystery building I see once in a while.  It clearly served some specific purpose at one point, but exactly what it was, I just don’t know. The entrance to the loft at the front top means it wasn’t simply some sort of garage, but what purpose it served I simply cannot fathom.

A bit further down the “coonpath” was this house, sticking up from a round oasis of green lawn surrounded by brown ploughed fields. The odd angle from which this photograph was taken obscures the actual shape of the house. It is actually sort of like a stubby cross, with two larger parts—the front, shown here, and the rear—and two smaller stubs sticking out from each side (one shown here on the left, the other mostly invisible on the right). An additional structure, only one-story and perhaps a later addition, sticks out from the side rear.  It is seen here on the left, giving the building a deceptive three-tier appearance. 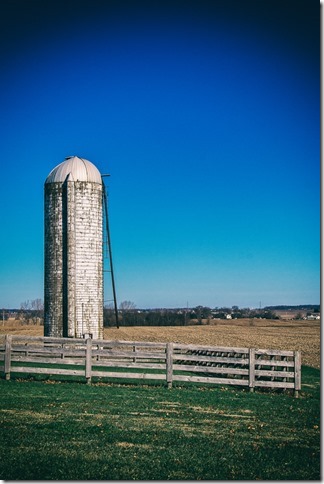 Another view of the countryside.  The deep right, with its elevation rise, suggests that we may be leaving the flatlands soon enough. 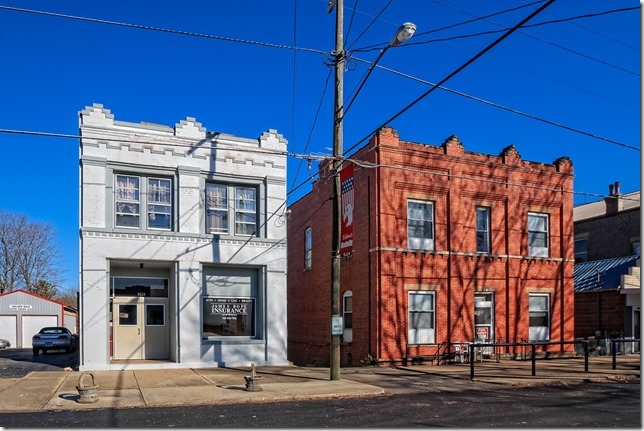 Coonpath more or less leads into the tiny hamlets of West Rushville and Rushville, Ohio, maybe a half-mile apart from each other.  Why two communities, separate yet so close together?  One can only imagine what horrible feud caused the separation. West Rushville—those parvenus—has only 134 inhabitants, while cosmopolitan Rushville has some 324. It is Rushville that is depicted above, or at least a sliver of it. Even a community of a few hundred sprang for civic banners to fly from the telephone poles.  Both these buildings are nicely kept up, though they are in all likelihood more than a century old.

I didn’t notice until I was processing the photograph the small sign that declares “15 minute parking.”  Is parking at such a premium in Rushville that such a sign is needed? 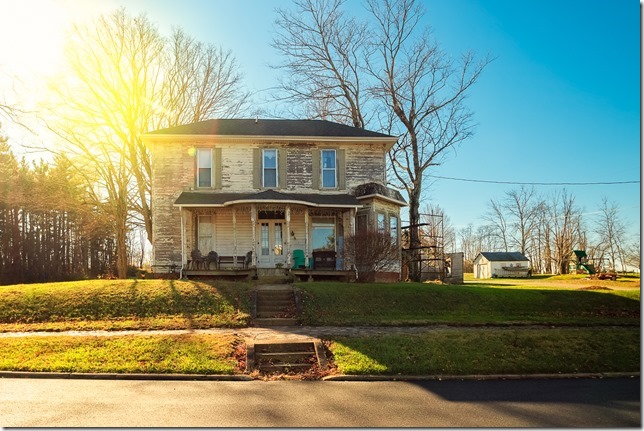 Here’s a shot of a rather prosperous looking farm—if the number, size and condition of its outbuildings are any indication at all.

Here are some old-style haystacks rather than large industrial bales, suggesting that Amish or Mennonites may live here.  The farmhouse in the background looks as if it could be in the Amish style, though not enough details are visible to be sure. The satellite view also makes it seem likely, with no hint of vehicles or power lines. Though this part of Ohio is not “Amish country,” there are Amish who live in the region. 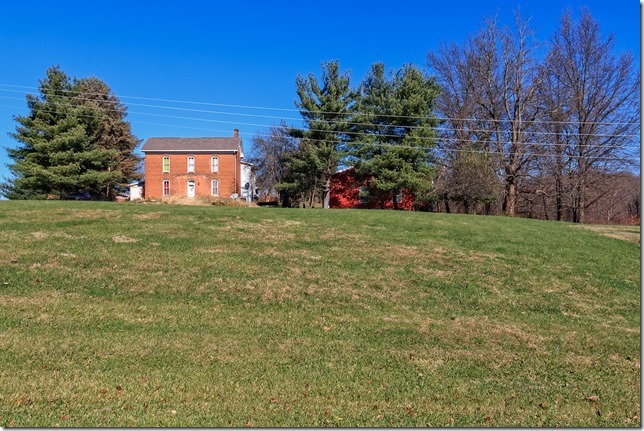 Here’ on a hill is an ancient brick house, still lived-in, with several additions made.  The front porch is totally gone, leaving only its scars behind.

In case you were wondering about the odd title to this blog entry, you have the reason here:  septic tanks.  About 40 of them, all told.  None of them look new, so they must have been dug up from various places and refurbished; at least, that’s my guess.  I am grateful for working plumbing, no matter what mechanism is used.   This is sort of the Lost Septic Tank Graveyard.

Sanitation is all about being clean and cleanliness is next to Godliness, so it is only fitting that I show an Appalachian church next.  This is the Friendship United Methodist Church, which really is out there by itself in the middle of nowhere.  What drew me to it, of course, was the Friendship  arch in front, which is really about as welcoming as you can possibly get.  I fell in love with that immediately.  I hope the people there really are friendly.

Rural Ohio really is a vast vehicular cemetery, where vehicles of all sorts—from cars and trucks to ambulances to buses and even street cars somehow come to die.  This was just one of a number of derelict vehicles I found along the road at one location. 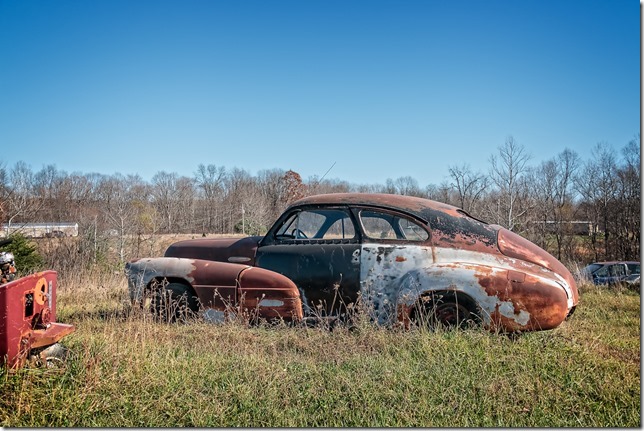 Here is another one, considerably older still. Too much of the vehicle has been stripped away for me, with my limited identification skills, to know what it was, but from the contours I’d guess it may be a late 1940s vehicle.

As do graveyards vehicular, so to do graveyards human dot the landscape. Sometimes it seems that every time you turn a corner in rural Ohio there is a little cemetery tucked away somewhere.  Many people are buried on their own family property, too, of course. 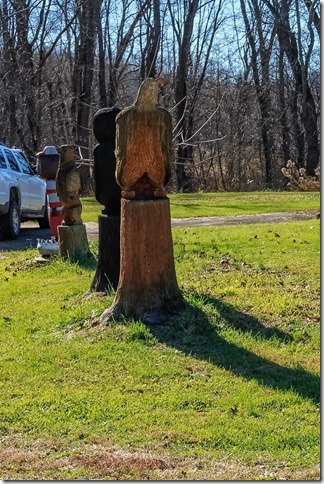 A little bit north of Nelsonville (I know, the name means nothing to you), I came across a property one of whose residents was clearly the transmogrification of entire forests into tree statues.  Here we see—front to back—an eagle, an owl, a bear and, in the rear, what appears to be Brutus Buckeye, the mascot of The Ohio State University. 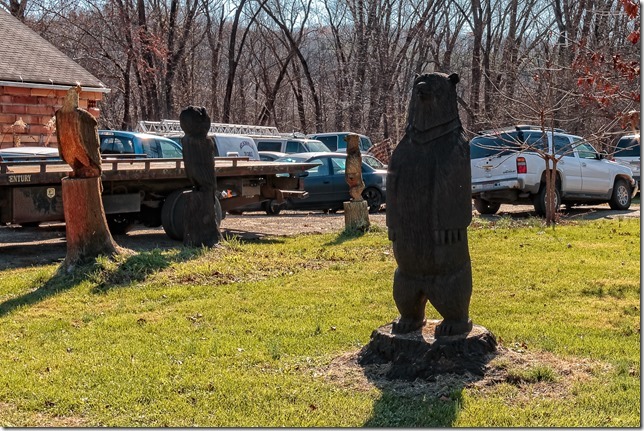 Here’s another shot, where we can see yet another bear.  This property is in Carbon Hill, Ohio (population, approximately 700, salute!), an unincorporated hamlet in Hocking County.

It has the name Carbon Hill because this used to be prime coal mining country in Ohio (a number of coal mining towns across the country were similarly named Carbon Hill).  Mines were everywhere in the area. For example, a hundred years ago, the Copperhead Coal Company, based in Carbon Hill, operated the small Copperhead Mine situated near the Hocking Valley Rail Road, employing about 12 people.  The Little Monkey Mine was also near by, run by the Russel Run Coal Company, also based in Carbon Hill, with about 27 miners.  About a mile west of Carbon Hill was the Dorr Run Mine, a larger mine, employing about 84 machine cutters, loaders and day hands.  The Carbon Hill Mining Company, meanwhile, operated the Stalters No. 1 mine at Longstreth, with about 29 workers.  A mile west of Carbon HIll in another direction was the Joyce Coal Mine, brand new in 1914, while a mile north of Carbon Hill was the Helm Clay Mine, operated by the Helm Clay Products Company; this was a tiny mine.

All those mines have long since ceased operations, of course (though there still is coal mining in southeast Ohio, at a decreased level), but their effects linger on—not just in an economy that never really recovered from the long decline of the southeast Ohio coal industry but also from the environmental effects.  The abandoned coal mines often have heavy-metal laden rocks exposed, which leach into runoff and into water systems, creating creeks and rivers that contain sulfuric acid.  In recent decades, Ohio has spent more than $30 million to decontaminate such waterways in the region. 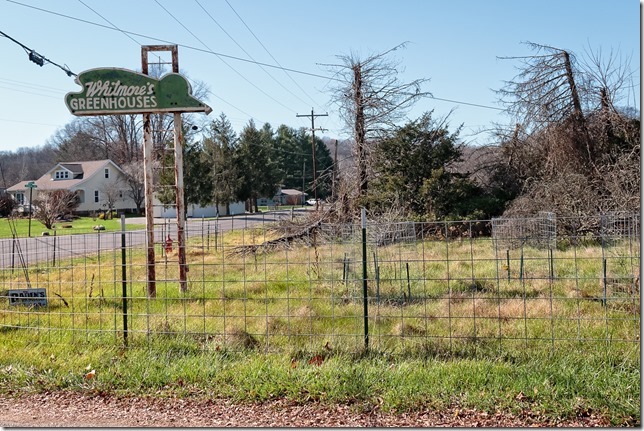 Also long since having ceased operations was the establishment called Whitmore’s Greenhouses, which once were located on the western outskirts of the far southeastern Ohio village of Buchtel.

I tried to find information about the business or its proprietor but failed.  This was once an interesting little building, though. 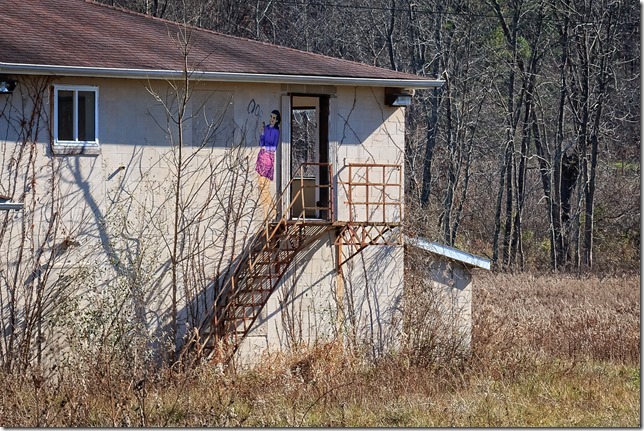 Buchtel is a speck of a village (population 558, salute!) that was named after the local agent for the Akron Iron Company.  The village grew around a furnace built by the company and it may have been a company town.  On the far eastern outskirts of Buchtel, I found an abandoned saloon that had an interesting smoker painted near the back door.

South of Buchtel a piece is another village, Chauncey (population 1, 049, salute!), which boasts the Cee dee Handy Mart, the name of which appealed to me.  Chauncey was another coal mining town that grew from only 185 inhabitants in 1880 to 1,178 by 1920.  It is just north of Athens, Ohio. 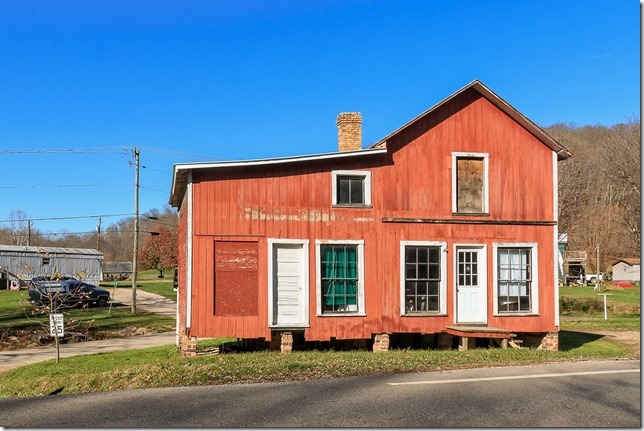 This old building on bricks may also be in Chauncey—my GPS hiccuped and the metadata is gone—but I am not sure.  That is a perhaps a lame way to end this blog entry—but this is only the first half of this nice little excursion, so there is more to come!