My 50th excursion, quite a milestone, took me northeast from Columbus to Coshocton (because all roads lead to Coshocton), and well beyond.  But let’s pick up a bit northeast of Coshocton, where I was driving northward through what was essentially the southern reach of traditional “Amish country” in Ohio (though Amish communities can be found throughout the state). 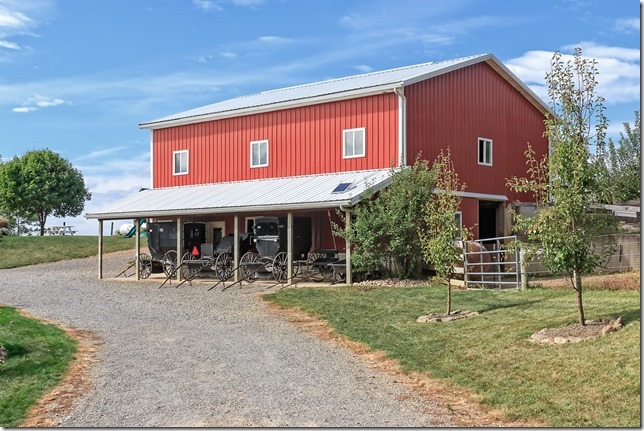 If you are driving through Amish country, you kinda hope to see Amish stuff.  For example, perhaps a horse and buggy garage like the one pictured above.  The pre-fab structure doesn’t exactly scream Amish, but those buggies certainly do.

By now, edging into Tuscarawas County, perhaps I wasn’t in the middle of nowhere, but I wasn’t really somewhere, either.  However, once upon a time, I might have been somewhere, because I was entering an area where there had once been a village—Fiat, Ohio—which was simply no more, not even a ghost town.  One remnant of it which remains, though is the St. Peter’s United Church of Christ, a church and accompanying large cemetery that rest on a large but low hill overlooking the surrounding countryside.  It is actually quite a beautiful scene.

The church is very well kept up (if you really want a close up, take a look at this drone footage of the church!).

Here’s a photo of the church from a different angle.  I bet there’s a nice view from that church. 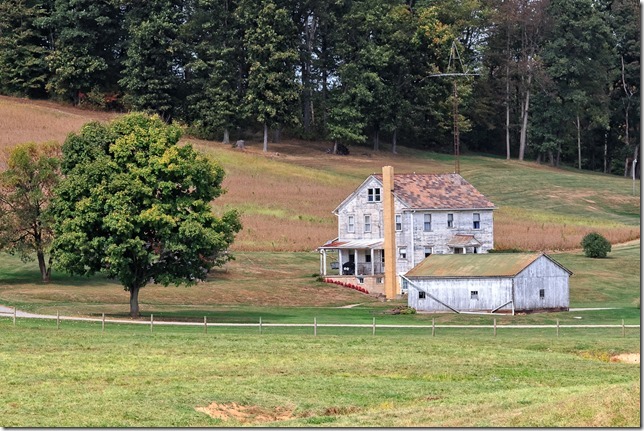 Very near the church is a picturesque old farmhouse. 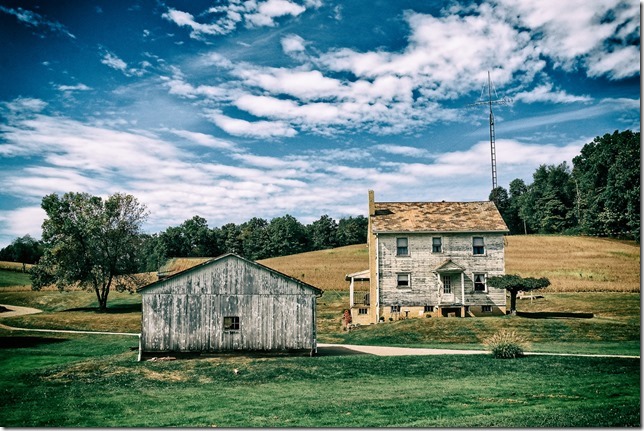 Here is a photograph of the old house from a different angle.  I rather like this angle. 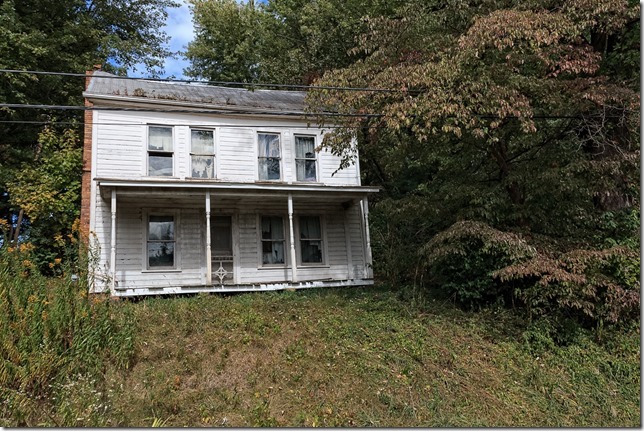 Up the road a mile or so, I came across this old house, nestled among some trees. This house was not in the middle of the forest but rather in a hamlet with the unusual name of Ragersville.  Ragersville—which sounds like a name out of the television show The Walking Dead—is an unincorporated community that dates back to the 1830s, named after someone with the last name of Rager.  It looks like it might have a population of around a hundred or so (salute!).

Despite names like “Ragerville,” this is a very placid and lovely area of Ohio, with enough low hills to make it interesting, but not quite yet Appalachia (though I was getting very close). 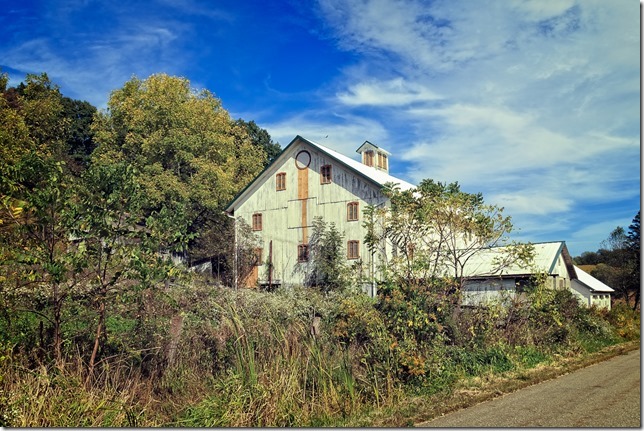 This lime-green barn was among the mildly unusual sites I saw on this day. I am not sure what possessed the barn’s builder to paint it this color.

I quickly traveled through New Philadelphia, a favorite Ohio town of mine, but not before stopping to take this photograph of a worse-for-wear residence that at one point in the past must have been positively majestic.  It is a shame that places like this cannot always stay at their peak of glory but must succumb to time’s ravages—and man’s neglect. 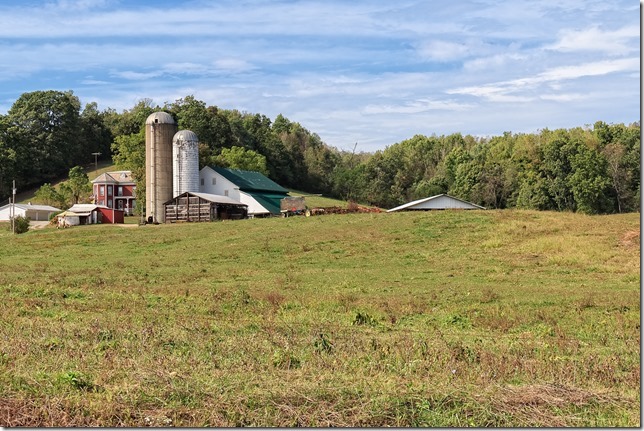 But soon enough I was out into the countryside again.  Farms, hills, trees, silos. 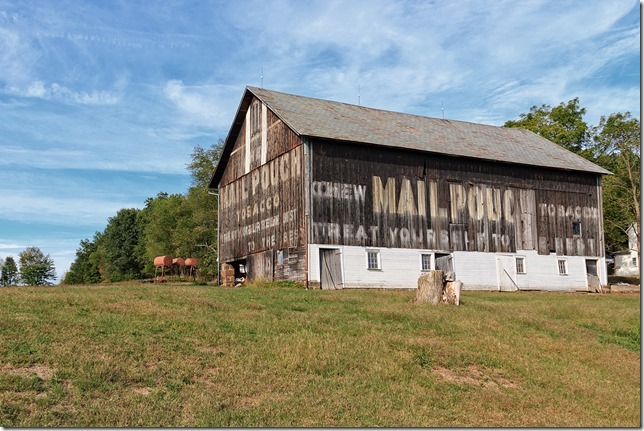 if you are traveling through farm country, it just isn’t right not to see a Mail Pouch Tobacco barn at least once in a while, don’t you think?

When a barn doesn’t have a Mail Pouch sign on it, I really do not know what brand of chewing tobacco the barn wants me to buy.  I feel bereft and purposeless without instructions to “treat myself to the very best.” 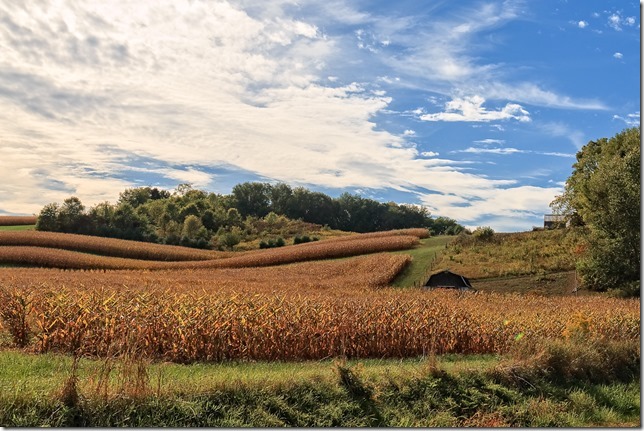 Here we see a scene that is really so emblematic of late summer in Ohio.  The corn is brown, the trees still green. 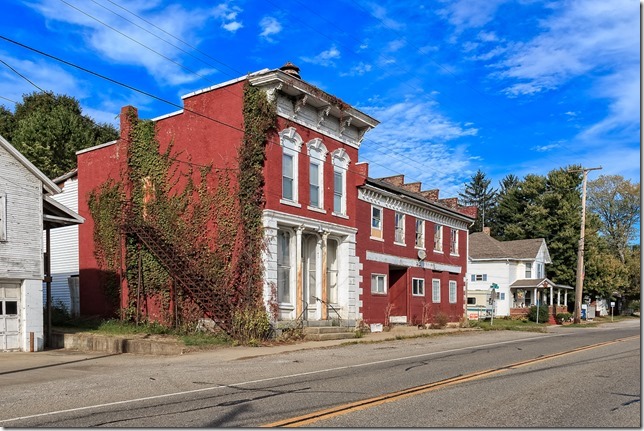 The woods and farms are punctuated by the occasional hamlet or village.  In this case, we are in the blink-or-you’ll-miss-it unincorporated hamlet of Augusta in far eastern Ohio.  There is no telling what this building once was, but now it seems to mainly serve as a trellis.

And out into the countryside again—take a long gander, as we will be abruptly changing the nature of the scenery and visiting the rust belt town of East Liverpool, along the Ohio River.  I have visited East Liverpool on previous (very early) excursions in July 2013 and August 2013, as well as a later visit in May 2014.  I just can’t stay away.

Depending on which direction one comes from, one of the first sights one might see in East Liverpool is the once impressive and still imposing shell of the Crockery City Brewing & Ice Company.  I’ve photographed it before, but who can pass up an opportunity to do so again?

East Liverpool reached its peak of prosperity and influence as a manufacturing town in the early 20th century and remnants of that past century’s former glory are constantly visible in the town today (a town that has only half the population it had a hundred years ago).  Here we see the faded but still extremely visible signs for The Dollar Savings Bank, which began live in 1902 under the auspices of George H. Owen and Harry T. Hall.  It was still operating as of 1926, but I wonder if it survived the Great Depression.   And with no barns around, it is the buildings that must direct us to chew Mail Pouch Tobacco.

This unusually shaped building is another bit of interesting East Liverpudlian architecture. 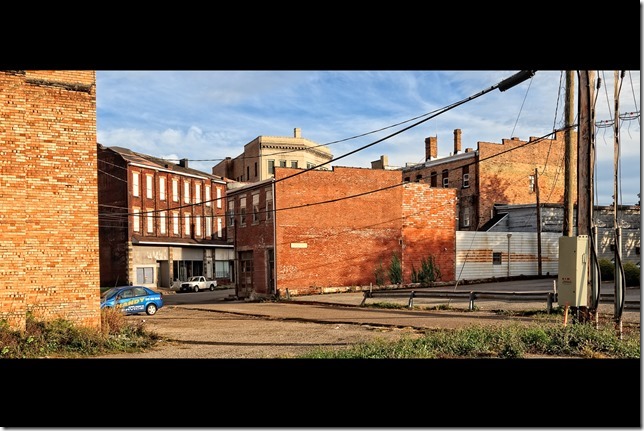 I thought this cinemascope shot of a menagerie of old buildings illustrates the extremely bricky atmosphere of downtown East Liverpool.  This was where country bricks came to the big city to make it big. 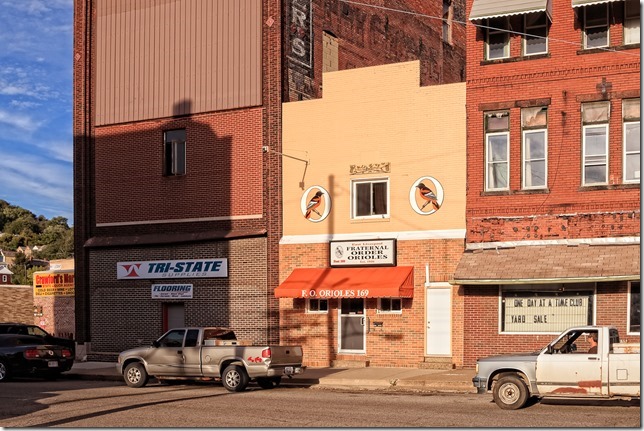 Nestled into this city block is the clubhouse for the Fraternal Order of Orioles.  A hundred years ago, social life in many towns and cities across America was dominated by fraternal orders.  Many still survive, but in greatly weakened condition.  I had not previously heard of this particular fraternal order.  Orioles, it turns out, was their second choice—they began in 1910 as the Order of Owls, but discovered that an earlier bird had beaten them to that particular worm, so they settled for Orioles.  Individual chapters are called “nests,” which is just too precious. Thee are only around 54 or so Nests left in the U.S., mostly in the northeast.  On the Orioles’ website they claim they want to achieve “one million members” in the U.S. and Canada, God bless ‘em. 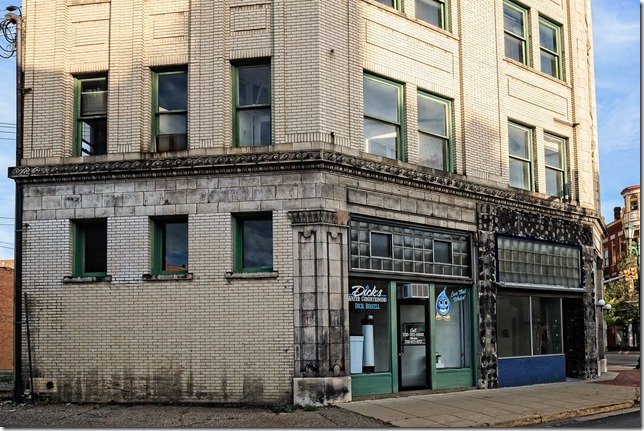 The economic state of East Liverpool is strongly reflected in its downtown, where many buildings are entirely or just barely occupied.  This imposing structure might at one point have been a bank or something similar, but now boasts but a single small business at ground level.  The upper floors are vacant.

Still, there is no doubt that many of the buildings in East Liverpool are quite charming. This building is the J. C. Thompson Building, erected in the 1890s to house a variety of businesses.  Upper floors later became apartment and hotel rooms.  The building now has an odd, new chapter to its history.  It was bought in 2013 by Sara Muschweck, who allegedly “cashed her retirement” to purchase it and is doing a low-budget restoration with money from giving tours to “paranormal investigators.” 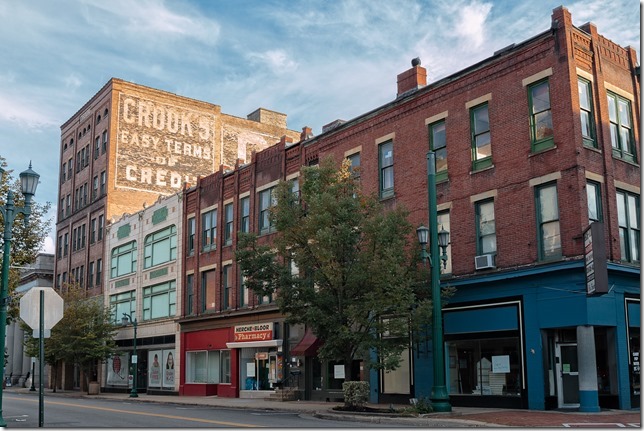 A ghostly remnant of Crook’s still promises “easy terms of credit.”  Frank Crook started the Crook Furniture Company in 1884.  As a business, it gave easy terms of credit for some time. The last Crook, a woman named Phyllis, died in 1978, after which a new purchaser turned it into Brook’s Furniture until that, too, closed in 2000. Much of this building block seems to be owned by the pharmacy, which however, does not seem to be able to find renters.

One of the more interesting buildings in “lower” East Liverpool, closer to the Ohio River, is the local Masonic Temple, also known as the Godwin-Knowles House.  Its builders and first owners were prominent pottery manufacturers in the region.  They didn’t have it long, building it in 1893 but selling it to the Masons in 1910.  The Masons have thus had this meeting place for more than a century.

The Masonic Temple is well kept, but, sadly, many other grand old residences in this area of East Liverpool are not.  These two residences once housed some of the cities elite, but that was a long time ago.  The house on the right has been divided into numerous apartments, one of which has both Halloween and Easter decorations out (in September).

This brightly colored little business just attracted my attention, so I have immortalized it in this blog forever—or at least until I fail to pay my WordPress bills. 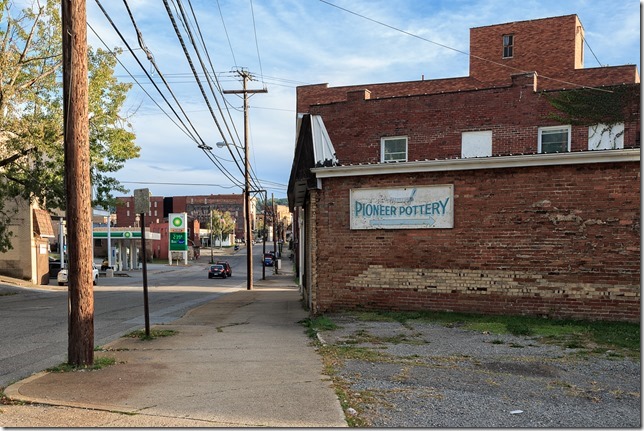 Pottery was once the life’s blood of East Liverpool.  Most of those great firms—and there were a great many such great firms—are now long gone, but one that lasted for a long time was Pioneer Pottery, which began way back in 1935.  It took a certain amount of bravery to start a new business in the middle of the Great Depression, but it apparently worked.  However, by 2008, and the Great Recession, it was almost a one-person operation and not exactly thriving.  However, it was purchased by Ulrich Honighausen, a California-based ceramics manufacturer, who turned it into a new company, American Mug and Stein, which now provides mugs to Starbucks, making it a nice little success story in a town that needs some success stories.  This photo is mostly of the sign—I couldn’t get a good shot of the business itself.  But it is a nice way to end this visit to East Liverpool.

One more place to visit on this excursion:   exciting Steubenville!