Excursion 33 (The Fire Lurks Below)

Artists, they say, can become fascinated with certain subjects, returning to them over and over again because the subjects are so compelling.  Of course, the same is true for stalkers.  I am no artist, but I do confess that certain sights I see on my excursions manage to exert a certain hold on me, sending out their siren call long after I have departed the premises.  Though I always want to explore and see new things, in the time I have been engaging in this little hobby, a few places have so intrinsically interested me that I have returned to them, sometimes more than once.

One of the subjects that fascinates me is Mud House Mansion, which I accidentally stumbled across in January 2014, and to which I returned only a month later.  Mud House Mansion, which is located a handful of miles east of Lancaster at the threshold of southeast Ohio, is a large abandoned house with rare architecture that probably dates to the 1870s.  A handful of matching, though plainer, outbuildings grace the location as well.

My previous visits had been in winter, when the MHM, as we regulars like to call it, stood out in a barren winter landscape.  What might it look like in summer, I asked, and decided to find out.  The result was that in late July 2014 I went on an excursion that had as its first waypoint a stop at MHM.  From there it would head southeast to the Ohio River.  My previous excursion had also been in this area, as southeastern Ohio is rather compelling.

Upon arriving at MHM, the first thing I discovered was that views of the mansion—already significantly constrained in terms of line of sight by topography and access—were even more limited than in winter, as the foliage hinders observation.  Indeed, tall cornstalks cut off entirely one of the ways to view MHM.  So I had to settle for what angles and views I could get.  As the above photograph illustrates, MHM in the fullness of summer is a rather different animal than it is in the winter.  On the one hand, there is more color, and the house doesn’t blend into the brown landscape as it does in the winter.  On the other hand, the encroaching vegetation, from trees to vines to corn, provide an almost claustrophobic feeling—MHM seems hemmed in, somehow.

Here in this closeup we can see this hemmed-in effect even more.  Because the house has no occupants, the corn is planted far closer to the building than it would be on a regular farm.  The rows of corn almost look like rows of soldiers, marching upon the house.

In post-processing, I was curious if I could somehow make the scene seem more sinister, just as an experiment.  I figured that things always look more sinister in black and white, so I started with that.  Then I did something I rarely do with photographs—I dodged and burned.  Dodging and burning is an old darkroom technique that dates back many decades before digital photography and refers to selectively lightening and/or darkening certain areas of a photograph in order to achieve a desired effect or feeling.  With digital photography, dodging and burning is a snap, because no physical processes are involved.  So I darkened the photograph, then selectively lightened certain areas of it, mostly in the center, where the buildings and the “yard” are.

The black edges made the encroaching vegetation look even more invasive, while the lighter areas highlighted the key area of the photograph.  I sought to give it a darker, more foreboding air.  I leave it up the reader to decide whether or not I succeeded.

While lush vegetation provides pleasing color for many photographs, it also obscures what you can actually see.  Sometimes you have to hope for a “hole” in the foliage through which you can possibly see what is beyond.  Here the plant life provides a frame through which we can view a distant barn. 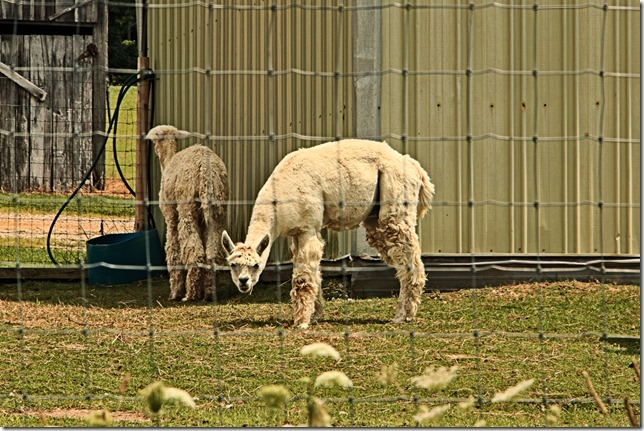 Why is being sheared seemingly so shameful, even for animals?  This little guy just wants me to go away and let him be ridiculous looking in peace. 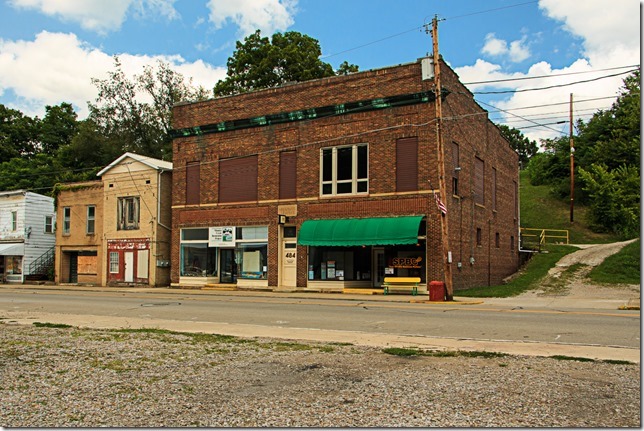 Deep in the Wayne National Forest in southeast Ohio is the tiny village of New Straitsville (population 722, salute!).   It has a name that gay-fearing Indiana pizza shop owners would love.

New Straitsville has a very unusual history.  It was a coal mining town, actually founded by the New Straitsville Mining Company.  Built to house workers and to support the mine and its work force, New Straitsville quickly grew to have a population of nearly 3,000 people.  However, its heyday would end up being remarkably brief.  In 1884, the miners struck after the company reduced wages from 70 cents per ton of coal down to 60 cents, and it was a bitter strike, indeed.  Mine owners brought in immigrant laborers as strikebreakers, which just made things worse.

So intense did passions run that some of the miners decided to sabotage the Syndicate #5 mine by sending burning coal cars down into the mine, setting it on fire.  The fire proved impossible to put out and just grew in intensity, eventually forcing the mine to shut down.  The fire damaged or destroyed a number of buildings, from underneath, and made others uninhabitable.  The fire followed the coal seem into other mines, forcing them to shut down as well.

According to one New Straitsville resident, in the mid-1900s the streets never froze over because the pavement was always warm.  During the Depression, one writer claimed that “today the landscape is a weird sight.  Paved roads are sunk as much as five feet; miniature volcanoes erupt eerily overnight; streams of hot water run through the woods where trees have been scorched or felled; flowers bloom without regard to the season; and over all is a sulphurous stench, faint but persistent.”

In the decades following the fire’s outbreak, there were numerous attempts to put it out, including creating cement walls, diverting a creek into the mine, and more.  The federal government tried to stop the fire, or at least contain it, in 1938, but to no avail.  At that time, it had eaten up $50,000,000 in coal—a figure NOT adjusted for inflation.  In 1959, the fire “ate” a section of SR 261, creating a huge sinkhole that swallowed up the road.

The fire never was put out and still burns to this day, 130 years later.  Many people remember Centralia, Pennsylvania, a ghost town now because of a coal mine fire started in the 1960s, but the New Straitsville coal mine fire has greatly eclipsed its Pennsylvania cousin in longevity.  By one estimate, the fire has burned more than 200 square miles of coal, but the Middle Kittaning Coal Seam has a virtually endless amount of coal to burn.

Even in the 2000s, smoke has emerged from cracks in the ground in parts of the Wayne National Forest as a result of the still-burning fire.  “It smelled awful…like burning tar,” said Ann Cramer, a Forest Service archaeologist.  “It was coming out a pretty big hole, maybe 20 feet across.  From a distance, it looked like a forest fire, there was so much smoke coming out.”  Recently, a documentary was made about the fire.

Other coal mines still operated in the area, but they were much smaller and as a result, New Straitsville began to decline in population.  By the 1930s, poulation was only around 1,500.  Some old mines were used to hide stills and whiskey during Prohibition, which gave New Straitsville a reputation as a moonshine town—something it has recently tried to capitalize on, holding annual Moonshine Festivals. 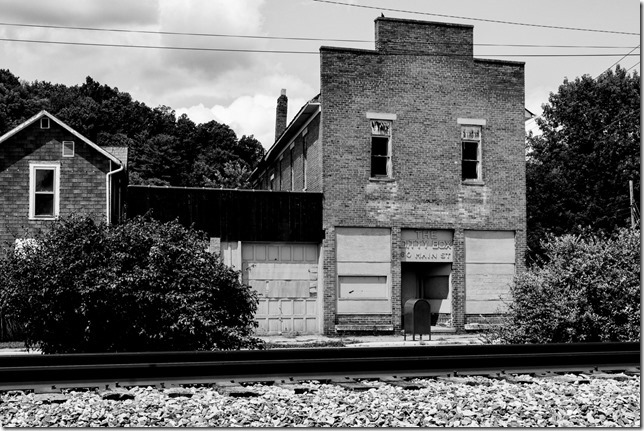 Down the road from New Straitsville, just outside the Wayne National Forest, is the village of Glouster, Ohio (population 1,791, salute!).  I have explored this place before, at some length, but this time I was just passing through.  Still, I found something I had not seen earlier, this abandoned storefront, now boarded up and empty, but with a name still on the building that speaks to happier times for this old coal town:  The Ditty Box.  Did it sell musical instruments?  Or perhaps was that a cute name for what down south might have been called a honkytonk?

Here’s another view of The Ditty Box.  Although I tried to research the building, I could not find out much about it.

Well, one can only take so much fast-paced town living before the countryside beckons.  I was particularly enamored of this ramshackle, and very red, barn.

There’s something to be said for bales of hay dotting a green landscape in bright and inviting sunshine.

This is Ohio’s version of the Eastern Island statues.

This ruined building is about 8 miles shy of the Ohio River, west of Tuppers Plains.  By the structure on top, I’d say this is an old schoolhouse, but most of the old schoolhouses I have seen were made of brick, not wood.  Of course that could also be because brick survives better than wood.

Very close to the Ohio River is the Long Bottom United Methodist Church, which has about as nice a country church building as I’ve seen.  Long Bottom is an unincorporated hamlet, barely more than a crossroads, along the Ohio River.

I think the photo looks even nicer in black and white.

The battery in my GPS ran out right about this time, so I am afraid I cannot relay where this relaxed pastoral scene was found.  I was on my way back north towards central Ohio, though.

Here the road squeezed in between a rocky hill and a prominent barn.

As of this writing, I have been going on these regular excursions for about two years now, and I will say that I am surprised at how many times I have seen fallen trees on buildings.  In some cases, it seems fairly likely that the fallen tree was cause of the building being abandoned, while in other cases, it seems that the building was vacant for some time before a nearby tree happened to fall on it—so no one bothered to remove or repair things.

Another angle.  The structure seems to have withstood this wooden blow rather well, all things considered, but the ravages of time are another thing altogether.

A very rare shot of bounding deer.  Rare for me, that is.  My camera is set for landscape photography, not action/sports photography, and oh-so-skittish deer never wait around for me to change settings.  As a result, usually the only time I ever get photographs of deer are those rare instances where they stay still long enough for me to take their picture.  These guys did not, but I dashed off a series of pictures, hoping that one would be relatively unblurry and, as a matter of fact, one was. 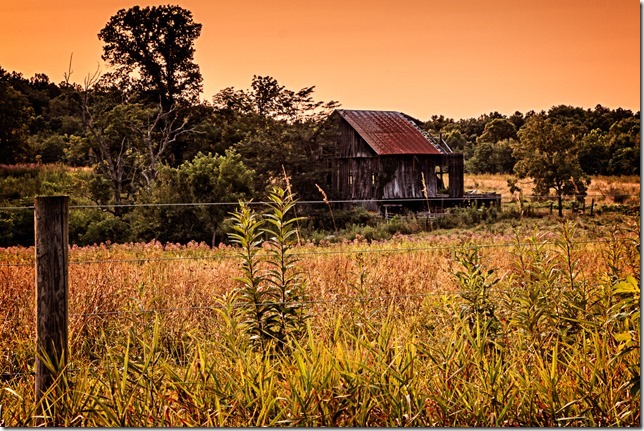 Even in the long days of summer, the day finally must wind down.  Here an old cabin watches the sunset.

6 thoughts on “Excursion 33 (The Fire Lurks Below)”