Population is an odd thing.  In Ohio, the population has been stagnant for some time.  There is a small net outflow of population, just barely compensated for by births.  But within the state, population is far from stagnant.  There is an outflow of people, often quite large, from every one of Ohio’s major cities save one (Columbus).  There is also often an outflow from inner-ring suburbs.  Where are they going?  Basically to further suburbs.  Ohio’s small cities and large towns are experiencing equally bad declines, with some having lost half their populations since World War II.  Zanesville, Ohio, along U.S. 40/I-70 an hour east of Columbus, is one such town.  Where did all those people go?  I haven’t been able to find out.

[Remember that you can click on all of the photos below to see larger, better versions]

Still early on in my fourth excursion, I found myself approaching the outskirts of Zanesville.  However, the countryside was still very, well, country…

I did see this one imposing building, which immediately caught my attention.  I would really like to know purpose this building originally served—and what function it has now.  Note the sign that reads “Closed for the Winter.”  What could be here that would close for the winter?

Now we are into Zanesville itself, a place now half the size it used to be, which has left plenty of buildings, both business and residential.  Here is one deserted stretch of commercial property.

I have a weakness for trucks like this; I call them “Sorceror” trucks, after the ancient, creaking huge trucks that appeared in the under-rated 1977 movie “Sorceror,” an excellent remake of “The Wages of Fear,” an earlier French movie.

Where it not for those cars in the background, this black and white shot could transport you back decades. 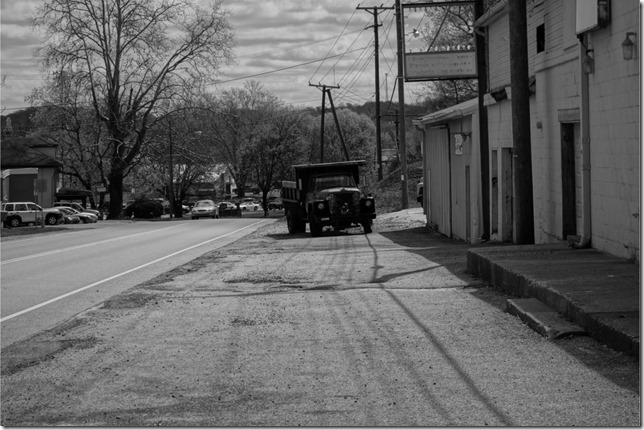 As I continued my drive, I was shocked to see an array of huge urns arranged in a circle.  I have written about an urn like this before, but until I saw this display I had no idea that the urn I had previously seen was not a unique item.  Clearly somebody or something was churning out these huge painted urns.  But what was the purpose of this display?  Was it intended, collectively, as art?  Were they being displayed commercially; i.e., so that you might see one you liked and buy it?  This encounter with Urnhenge increased my curiosity tenfold—nor was it to be the last time I would see such a thing!

Now we come to downtown Zanesville, which has a few very nice buildings, not least of which is the Muskingum County Courthouse.

This large church I found attractive, too, but as I looked more closely, it was the painting above the doorways that really caught my attention. 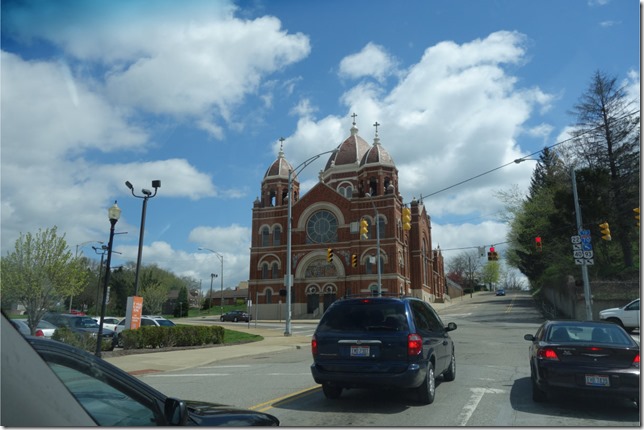 This is St. Nicholas’s Catholic Church, built in the last years of the 19th century.  The painting depicts a person—Columbus?—landing on American shores to bring God to the Native Americans.  Let’s face it, in this day and age, that’s a creepy picture at best; a gloss on invasion, decimation by disease, and atrocity.  Not exactly Godly, if you know what I mean.  Just sayin’.

Nearby was this dilapidated old house.  Houses like this have always fascinated me because I have to wonder, “Who ever actually goes up all those stairs?”  Of all the thousands of houses like this I’ve seen, I’ve never actually seen anybody climbing any of these stairs.

One thought on “Excursion 4, Part 3 (Urnhenge)”